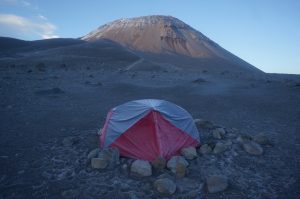 El Fraile is Incahuasi’s shorter neighbor to the west, barely exceeding 6000 meters. I woke to find it mostly free of fresh snow, while Incahuasi appeared to have a few inches above about 5500 meters, so things looked good. While El Fraile would be a short climb, I also planned to return to the police station the same day, so I got a reasonably early start to beat the expected afternoon storms. The east-facing route made this easier, as I would be in the sun much sooner than on Incahuasi. Rather than returning to the saddle, I took the recommended route up a faint wash heading southwest toward the peak, and found an old set of footprints in places. 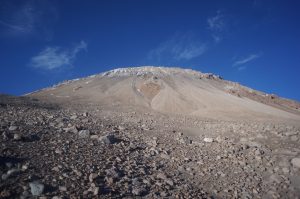 El Fraile is a symmetric scree cone with a few rotten cliffs higher up and its top chopped off, so the route tries to hit the scree as high as possible. I was eventually forced onto the loose slope, and it was every bit as wretched as expected, consisting of loose rocks ranging from grape- to basketball-sized. There was no path, so I looked for subtle signs of slightly more stable terrain. I tried scrambling up a couple of the exposed rock ribs, but they often fell apart under my hands or feet, making them little better than the scree. 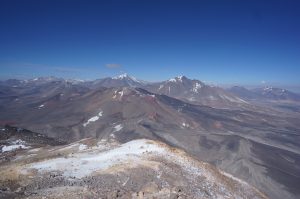 I eventually emerged on the chopped-off part, and found the summit still some distance away. However, the terrain was more stable, so it was mostly an easy hike to the top. It was clear and calm, with just a few clouds starting to form over Incahuasi and some of the peaks to the north. I sat on my pack for awhile, eating and studying my next peaks, El Muerto and Ojos del Salado, then returned to where I had reached the summit plateau. Along the way I stuffed some fresh snow into my water bladder, since I had not seen flowing water along the way. I took a slightly different line than on the ascent, and fortunately found near-perfect boot-skiing most of the way to the base. After a short, awkward crossing of some loose boulders, it was an easy sand-hike back to camp. 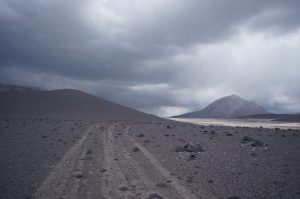 The clouds were starting to look more serious by the time I packed up my tent, and the wind was picking up, so I hurried back to my bike as best I could with my ungainly pack. By the time I reached the Agua Dulce, the clouds had spread over the valley and I was worried about rain and/or hail. I was looking forward to another night in the police station, but an official-looking truck pulled into the garage just before I reached it, and another was parked in back. The station was clearly no longer in use by the police, and it was raining, but I did not want company or trouble, so I continued another half-mile or so to the supposed refugio near the Laguna Verde hot springs. 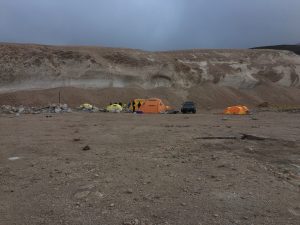 All of it was a huge disappointment. The hot springs were warm at best, the refugio was more run-down than the police station and full of Europeans (Germans?), there were a bunch of tents outside, and there was no potable water. I set up my tent behind one of the windbreaks and crawled inside to cook dinner. Soon after, a couple of Russians pulled up to the spot next to mine in a truck, and proceeded to be loud long after I wanted to be asleep. So much for my easy night to recover before heading in to climb Ojos. Oh, well… good enough.

Looking down toward camp