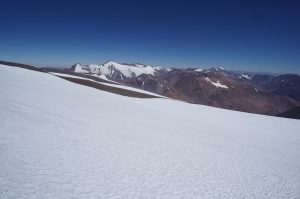 At 15,650′, the Paso Agua Negra is one of the highest in the Andes, slightly higher than the Paso San Francisco near Ojos del Salado, and only (I think) surpassed by a few passes in Peru. It provides convenient road access to at least two 20,000′ peaks, Cerro los Olivares and Majadita. I successfully climbed both in a four-day trip out of Las Flores, though not on the schedule I had planned, since Olivares in particular was significantly harder than I expected. 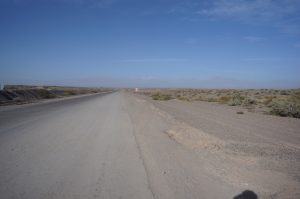 Leaving at a reasonable hour from Las Flores, I made the short ride to the aduana just outside of town, gave one of the guards my passport, explained my plan, then waited while he made a phone call. He sent me to a customs officer, who typed some stuff into his computer, then gave me a four-day pass to the border region. Clock ticking, I was on my way. The Argentine government has put in an impressive amount of engineering for the dozen or two cars it sees per day, and the road is paved and gently-graded up to about 12,800′. From Las Flores at 5900′, the first few thousand feet climb the almost-invisible but very-perceptible slope of the desert floor to the mouth of the Agua Negra valley on mediocre to terrible pavement. 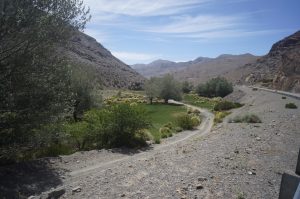 Having seen an old map that showed the road as dirt, I was worried that I would have a long day, but the pavement dramatically improves as one enters the Agua Negra, and a steady tailwind made progress even faster. I stopped a bit before noon under the only trees I had seen all day, then continued a short distance to a gate and guard post. One of the guards motioned me inside, where he inspected my passport and asked about my plans. After he radioed those plans to someone, and had me sign two copies of what might have been a liability waiver, I was once again on my way, with more permission to spend four days in the border zone. 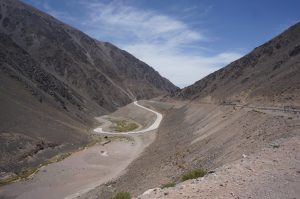 I grabbed another liter and a half of water at the only Water Saint I had seen so far, then continued up-canyon. Thanks to the tailwind, new road, and fresh listening material downloaded in Las Flores, the long climb was a pleasant cruise. There is even a clear spring partway up, so one does not have to strain the thick, muddy water of the Rio Agua Negra. The pavement ends where the valley flattens out, so I actually sped up a bit on the dirt. I saw signs warning of road construction, and a grader ahead, so perhaps the rest of the pass is on its way to being paved. 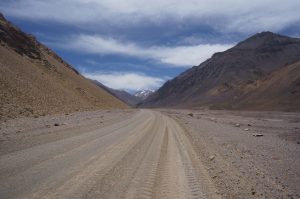 Just before I caught the grader, someone in an SUV going the other way motioned me to stop. A young Argentinian woman jumped out of the back seat, and while the driver waited with some obvious impatience, she explained in Spanish and then English that she had been traveling by bike. Unfortunately her bike had had some irreparable mechanical failure somewhere on the other side of the pass, so she was hitching a ride into town. It seemed like a bold and impressive thing for a woman to be doing alone, but I did not say anything; maybe solo touring is more common than I thought here. As a fellow bike-tourist, she understood my simple needs, giving me some extra food and a hug before jumping back into the car and driving off. 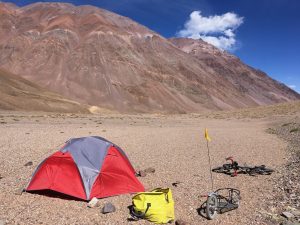 The good cheer was well-timed, because I was soon back in the headwind zone, which turned the gentle and slightly washboard climb into a grim slog in my lowest gear. My turnoff up the Arroyo San Lorenzo coincided with a sign for a tunnel, of which there was no other evidence. Perhaps it is slated to be built once the paving project is complete. Thanks to recent mining activity, the road up San Lorenzo is in fairly good shape, but the headwind and 7500′ of climbing in my legs told me that it was time to camp. I briefly inspected the premade windbreak of a ruin right by the road, but the combination of trash and proximity to the highway convinced me to move on. I found a nice spot in a flood plain a few hundred yards up the canyon, pitched my tent, and set my alarm for 5:30 before reading myself to sleep.

With a slightly higher bike trailhead and a slightly lower summit, I expected Olivares to be the easiest of the two summits; I was badly mistaken. Though there does not appear to be any active mining in the valley, there is an extensive system of dirt roads leading all the way from the highway to the toe of the small glacier at its head. Biggar briefly describes the standard route as climbing to the left of this glacier, then traversing south to the summit. While he also suggests that the east glacier should be a moderate climb, I liked the idea of leaving my ice axe and crampons in camp. 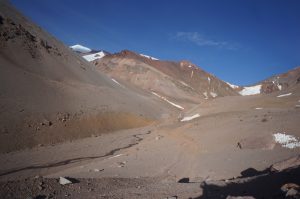 The San Lorenzo valley is several miles long, and between the altitude, fatigue from the previous day’s ride, soft ground, and the road’s meandering, it took longer than I had expected to reach the toe of the glacier. Despite its wandering, I was extremely grateful for the road, as the whole valley looks like a pile of loose mine tailings, and would have been agony to climb cross-country or on guanaco paths. I did not see any mine trucks or pits, though there was some monitoring equipment and signage possibly suggesting some exploratory drilling. 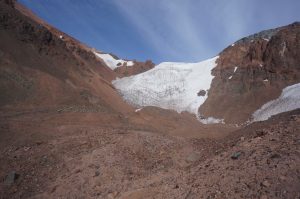 I was only at around 4800m at this point, and slightly worried about how long the day might be as I headed into the untracked scree. I was hoping for a bootpack on the standard route, but Olivares apparently sees very little climbing activity: I saw no tracks for the rest of the day, nor tent platforms at the supposed high camp around 5000m. Trying to avoid dirt-covered ice near the glacier, I aimed farther left, climbing horrible scree toward some rock that I hoped would be somewhat more efficient. It was all slow going, made more frustrating when I reached the first (of many) false summits, a point around 5850m, and realized two things: first, I would have to lose 50-60m to get back on-route; second, had I continued farther west before heading north, I would have been on lower-angle and much more stable scree instead of the angle-of-repose nightmare I had just climbed. 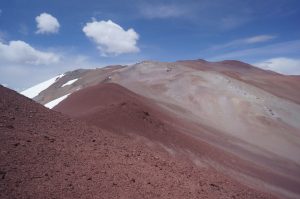 Back on-route, things went about as well as could be expected. The scree and talus were still loose, and I was moving as slowly as expected at the altitude, but I no longer had to use my hands to make upward progress, or to step in the same spot multiple times before things stopped moving. Unfortunately, it is almost two miles from the first false summit to the true summit, all of it above 19,000′, and there are several glaciers or snowfields I had to avoid. (“Snowfield” in the high Andes usually means “penitente hell.”) 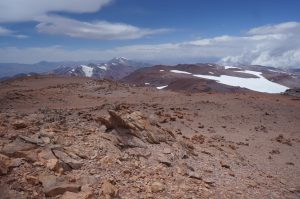 Seeing the distant summit from the first false one, and almost out of food, I almost gave up and returned to camp. However I slogged on, going around or over obstacles, and finally reached the summit plateau with its weird little rock pinnacles. To the south was a lower sub-summit, its east slopes covered in steep glaciers. To the north, I could see the endless false summits I had traversed, some unknown peaks in the distance, and the prominent Cerro Las Tortolas, another 20,000′ peak that I had decided not to climb for logistical reasons. 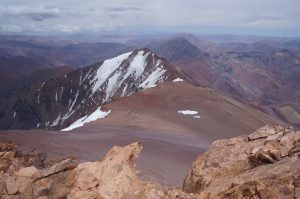 I had seen a road crossing the saddle to the east, with a possible clear scree descent from the ridge, and decided to try to return that way instead of retracing my steps. I retreated past the first false summit, then descended to around 5700m, looking for a path between the glaciers on Olivares’ east face. Unfortunately this premature descent led only to glacier, and I was forced all the way back up to 6000m to rejoin the scree path I had spotted on the way up. This worked well for a few thousand feet, with nice, deep, skiable scree. The rocks were large enough that they would have punished my ankles in running shoes, making me grateful for my clunky mountaineering boots. Though they are usually overkill in other ranges, I am finding that the ground in part of the Andes is often nasty enough to make them worthwhile. 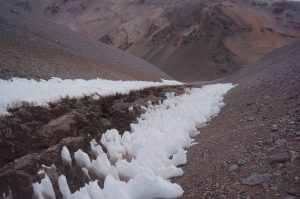 The fun ended at the stream at the base of the slope, which presented a fresh Andean hell: angle-of-repose scree leading directly to penitentes, in turn surrounding a meandering glacial torrent partly bridged by uneven ice and dirt. Thankful that I was at least heading downhill, I side-hilled my way down to the junction with the main stream, where I grabbed some surprisingly-clear water, then took a path up to the old road. The road appeared to be abandoned, but was in good shape until the long traverse east above the San Lorenzo valley. Where it finally became near-useless, I bombed straight down the scree-slope to the valley bottom, following a faint guanaco track. From there, it was a straightforward if exhausted walk back to the road, and to my tent. I had originally planned to move camp down the road to the next trailhead at Pirca Negra, but it was almost 7:30 and I was feeling wrecked. There was no way I would summit another 20,000′ peak the next day.

Peaks and glaciers to the north

Mixing of the waters