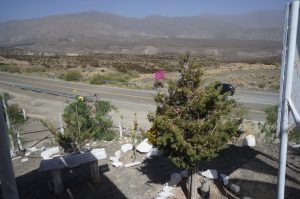 I had hoped to climb Cerro Ansilta 2, the almost-6000m highpoint of a range near Mercedario supposedly approached via Calingasta and a dirt road along the Rio Ansilta. This would involve a short ride from Barreal, then an unknown ride to base camp and probably two or three days climbing Ansilta 1 and 2. I had expected Calingasta, a somewhat touristic town at a road junction, to be a better base camp than Barreal. I was therefore disappointed to find that it had almost no internet, and a truly pathetic grocery store that had a whole aisle of yerba maté, but lacked such basic staples as oats, chocolate, and peanuts. Making the best of a poor situation, I bought eggs, vegetables, cookies, a kilogram of dinner rolls, and 750g of “Dulce Calingasta,” a giant bar of gelatinous fruit-flavored stuff. I then hung out in the shade in the town square, waiting for it to cool off and deciding what to do. 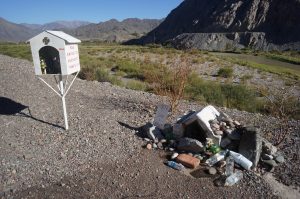 I had planned to take RP 412 to Las Flores, a 130 km ride, but it looked like some 60 km of it might be dirt. On a whim I asked at the gendarmeria about route options, and was told that 412 was a 4×4 route, and that my best choice was a 180 km route via RN 149. I decided to chip away the first 40 km of that in the evening, camping at my last guaranteed water source along the Rio San Juan. After some initial dirt due to road construction, the combination of a steady descent along the river and a raging tailwind made the miles fly by, and I was soon across the big bridge where the road leaves the San Juan. The river was thick and muddy like the Colorado or Rio Grande, so rather than dealing with it, I raided a water/garbage shrine next to the bridge. Hopefully the water was meant for travelers such as myself, and I did not call forth the wrath of the patron saint. One of the eggs had broken in the top of my pack, so I got to spend some time dealing with that before making a dinner of vegetable and egg soup with dinner rolls. Yum. 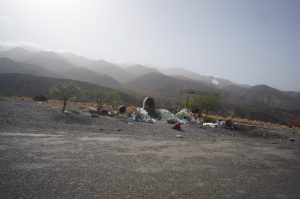 The next day began with me paying for my fast ride down the San Juan with a 3000-foot climb into a brutal headwind from the east. I still do not understand the wind directions here, but at some point while traveling east across the range, the prevailing wind direction seems to shift from west to east. I am not sure where this point is, but I suspect that my future ride back west across the Atacama may be slow and painful. I fought the wind mostly in my granny gear, finally reaching a particularly large roadside shrine at the vaguely-defined pass. It featured a sheltered picnic table, a fire pit, and even a Christmas tree. I took this as a sign to take a break and choke down some Ducle Calingasta and my few remaining peanuts. 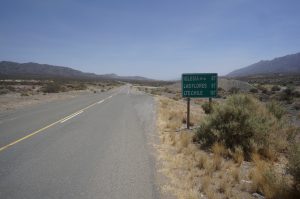 The headwind remained the same on the other side of the pass, but was far less annoying going downhill, and I reached the road junction without too much frustration. From there it was a daunting 97 km to Las Flores, but fortunately no longer against the wind. The road heads north and east through a couple of valleys, in which the wind seemed to come from the east and southeast. This made my second 3000-foot climb of the day much more pleasant than the first. A man in a pickup truck stopped and offered me a ride near its base, but I politely declined, partly out of pride, and partly because I had plenty of time, water, and energy. I was thorougly sick of the vile Dulce, but in a stroke of genius I had added Nestle Quik to both of my water bottles, both masking the plastic-y taste and providing delicious calories. 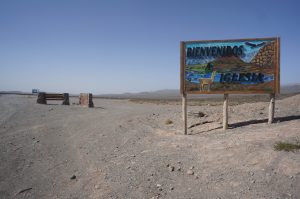 This pass was mostly similar in appearance to the last, climbing a subtly-inclined desert plain, but did narrow in its final few kilometers, following a dry streambed to emerge on a high plateau. The “welcome to Iglesias” sign, with its guanacos and greenery, hardly matched the sere surroundings, but presumably such things existed elsewhere in the province. More importantly to me, the rest of my day would be downhill. The tailwind that had pushed me up the pass turned into a steady headwind at some point, but the descent was steep enough that I did not care as I made my way to the village of Iglesias, stopping along the way for a phone call (finally, 4G service!). I could have stopped there, but chose to crank out another 10 km to Las Flores, an equally tiny village with the two distinctions of having a campground on my map, and lying at the junction with my next side-trip up the Paso Agua Negra. Though almost everything else was closed for Christmas, the gas station and campground were open, so I could buy myself a treat and sleep in peace. 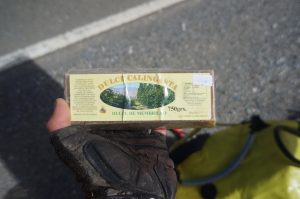 I took a rest day in Las Flores, not prepared to head straight back into the wilderness. The gas station and town square both have usable WiFi, and most of the town has decent cell coverage, so I was able to catch up with the outside world. The grocery store has the basic staples, though they are weirdly all behind the counter, so you have to ask the shopkeeper for them one by one. Uncomfortable with this kind of shopping, I forgot a few things in my hurry to escape, and had to supplement my food with a last-minute junk food run to the gas station.