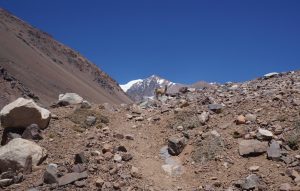 At just over 22,000′ (about 6710m), Cerro Mercedario is the eighth-highest peak in the Andes, less than 800′ shorter than Aconcagua. Its scale and remoteness are hard to grasp for someone familiar with the mountains of North America and Europe. Mercedario rises 16,700′ from the valley to its east at 5200′, where the little town of Barreal, almost fifty miles away in a straight line, is the closest civilization and pavement. Only Denali, Saint Elias, and perhaps a few other peaks in Alaska and the Yukon have similar scale. The summit is visible from town, and from nearly the entire 45-mile bicycle approach.

Coming off several days in Mendoza at 2500′, and nights in Uspallata and Barreal, both around 5000′, I was somewhat wary of altitude sickness, despite never having experienced it. I therefore broke the climb from the end of the cycling at 7500′ into three roughly 5000′ (1500m) sections, camping at Guanaquitos around 12,000′, then Pircas Indios around 17,000′. This involved a lot of sitting around in my tent, and I neither had trouble sleeping at high camp, nor experienced a headache or nausea on summit day. My climbing performance was similar to what I experienced in Peru, with my rate of ascent slowing to about three breaths per vertical foot, or a bit under 1000′ per hour, above 21,000′. In retrospect I probably could have done the entire thing with a single camp at Cuesta Blanca around 15,000′, so I will try to break future long ascents into something closer to 2000m chunks. 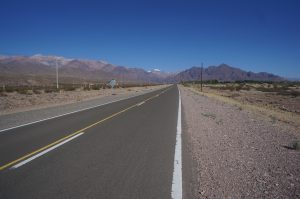 Ruta Provincial 149 runs along the eastern side of the Andes, connecting various base towns from Uspallata north. The stretch from Uspallata to Barreal, the closest town to Mercedario, is about 115 km, made longer by 36 km of dirt in the middle. This dirt is fortunately mostly well-graded, but still features numerous washboard sections, and much fine dust that collects on everything. My trailer’s dry-bag seemed to keep it out, but both me and my bike were absolutely coated, no doubt contributing wear and tear to both of us. The road is mostly flat, but crosses a very gentle watershed boundary before descending to Uspallata on merciful pavement. A slightly late start, plus the dirt, plus a headwind from the north on the final descent made it a full day for me. 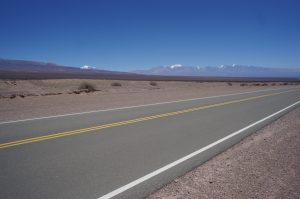 Barreal is not on a major highway, or even at a road junction, so it is much more of a backwater than Uspallata. Everything on the single commercial street is closed from sometime after noon until 6:00 PM, and the grocery stores are small and strangely stocked. The one I chose had a dozen kinds of yerba maté and lots of Christmas goodies, but no dried fruit or instant oats. I settled for a kilogram of salted peanuts, some kind of oat powder intended for breading chicken, and a bunch of polenta, at an astounding five thousand calories per dollar! Neither of the two hardware stores seemed to carry white gas (naphtha, universal solvent, bencina blanca) for my stove, so I planned on a couple of cold meals in case I had to melt snow for water. I am slowly figuring this place out, but I have a ways to go. 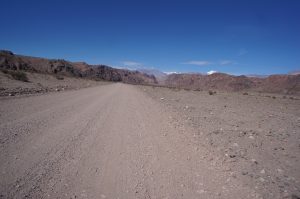 After a night at the municipal campground (hot showers, large pool, electricity, $2.70/night), I exited the south end of town, then almost immediately turned onto the dirt road leading up the Rio Los Patos to Laguna Blanca. The road crosses the broad desert valley, then closely follows the river as it cuts a canyon through some foothills, gradually climbing the whole time. The branch following the Rio Blanco was in better shape than I had been led to believe, but a brutal headwind made the ride past Las Amarillas to Los Molles take longer than I had expected. 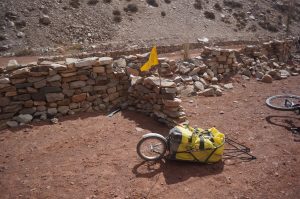 I met the road crew there at 7500′, where the road begins climbing in earnest to Laguna Blanca at 9800′. While it remains well-graded past the lake, the road was too steep for me to ride with a trailer, so I decided to camp at Los Molles. This would leave me a bit under 15,000′ of climbing to the summit, conveniently broken into three similar-sized chunks by established camps. I amused myself for awhile building a wall against the savage downriver winds, then hiked down to the river to fetch water, getting sprayed in the process as the wind kicked droplets off the rapids. 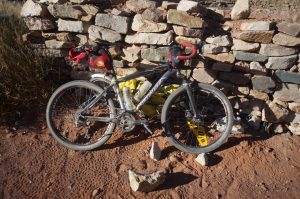 I got a lazy start the next morning, packing up, locking my bike to the trailer, then starting out up the road to Guanaquitos. The road follows Laguna Blanca’s outlet stream, which is blessedly free of settlement thanks to the lake above. The stream is a 30-foot wide strip of greenery in a vast desert wasteland. The wind persisted as I hiked past the lake and along the gravel flats above. There were a handful of miners up here, with one busily destroying a hillside with a grader for no apparent reason. At the abandoned refugio the main track turns right, while the standard route continues upriver on an old road that is little more than a trail. 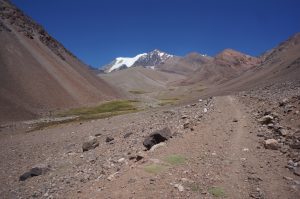 Guanaquitos camp, at 12,100′, is well-named, as the combination of water and greenery draws dozens of guanacos, generally timid, sometimes in herds, sometimes alone. I set up my tent in one of a half-dozen flat spots surrounded by inadequate walls, tied a dozen or so rocks to it to keep it from blowing away, then twiddled my thumbs “acclimatizing” for the rest of the day. Whether backpacking or climbing, I prefer to be moving while it is light, so I found this aspect of high-altitude mountaineering frustrating and wasteful. 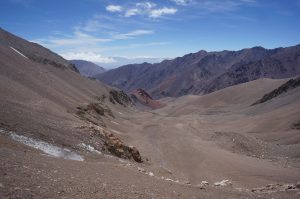 The next morning I packed up and headed for Pircas Indios, my high camp at 16,900′. I followed a trail with some bootprints but mostly guanaco tracks along a side-stream, then on up a dry valley past a few penitentes toward some small glaciers. Pausing at an intermediate camp below the headwall for a snack, I was surprised to see another climber slowly making his way up the trail. I caught him partway up the steep climb, and was delighted to learn that he was a fellow mountaineer/cyclist — what are the odds? We hiked together and talked in mostly Spanish for a few minutes, then I left him on the gentler climb higher up. 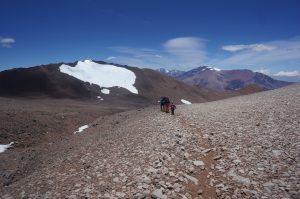 Perhaps a half-hour below camp I ran into three more people: a Russian couple and their seven-year-old daughter, out for an acclimatization trip. They spoke limited English, but sounded very experienced, and the daughter seemed happy (for a Russian) traipsing along behind with her mittens tied to her wrists. They told me that it was savagely windy above camp, and that I would have to melt snow for water, which made me worry about my limited gas supply. But Pachamama was smiling on me: not only was there flowing water below a small glacier five minutes from camp, but someone had left a liter bottle labeled “bencina!” at one of the tent platforms. It smelled about right, and was very flammable, so I topped off my fuel bottle. 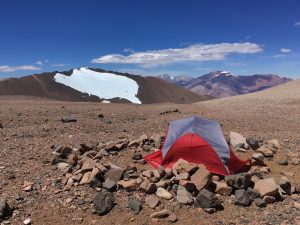 I tied my tent to even more rocks, then rested for awhile inside before hiking uphill a bit to talk to the guy I had met on the way up. He turned out to be an Argentinian gardener who scraped together enough money each year to do a summer bike/mountaineering tour. He was unsure about whether he would go for the summit the next day, waiting to see how he slept and felt in the morning. We talked until it got cold, sharing maté (it’s ubiquitous in Argentina, but I refuse to come back as That Guy, and will stick to instant coffee), then he lent me a local guidebook by Aníbal Maturano, a local mountaineer with many first ascents in the Mercedario area. It is written in Spanish and English, with each paragraph followed by its translation, making it not only a good source of information, but a fun way to improve my Spanish if I had had more time with it. 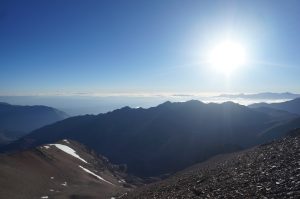 I woke up to my alarm at 5:30 on summit day, made oatmeal from the half-frozen water in my bladder, then started for the summit with a near-empty pack around 6:20. Sebastian had started maybe a half-hour earlier, and we traded encouragement when I caught him near the normal high camp at 19,000′, at the foot of the La Ollada glacier. Above, clear up- and down-tracks follow a broad ridge left of the glacier. I slowly made my way up the switchbacks, moderating my pace with the altitude. I was taking one breath per step, but shortening my steps, taking two and eventually three steps to gain a vertical foot. Behind me, a layer of clouds in the Rio Los Patos valley hid the view of Barreal; ahead, I had clear views of the Ollada glacier and the long northeast ridge. 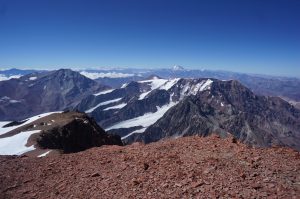 The trail traverses the right side of the ridge, so I was sheltered from the wind almost until the summit knob, and therefore warm enough to climb in just my t-shirt and mid-weight hoodie. It was windy enough for me to be glad of my goggles on the summit, but seemed no worse than at my previous three camps. I took in the views of nearby Ramada, Aconcagua in the mid-distance, and unknown peaks to the north and east, then sat on the sheltered side of the summit to eat some peanuts. After taking about 4h15 to ascend, I headed down after about twenty minutes, passing Sebastian about 200m below the summit. 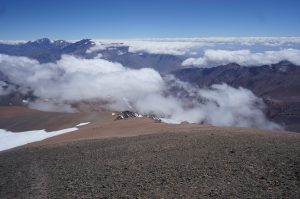 The down-tracks were loose and fast, so I was back to camp between noon and 1:00. I thought of waiting for Sebastian, but he would probably be a couple of hours behind, and I was impatient to finally use the whole day. I packed up, then made a forced march all the way back to my bike at 7500′, reaching it shortly before sunset. I camped in the abandoned building, which was somewhat more sheltered than my makeshift wall, too exhausted to realize until the next morning that someone had stolen my saddlebag. Seeing no one but miners and a handful of mountaineers, I had not thoroughly hidden my bike, simply stashing it out of casual sight behind a wall. The saddlebag contained all of my bike parts and tools, which are critical but fortunately mostly easy and cheap to replace.

I was in a sour mood on the return to town, riding the dirt road without the massive tailwind I had earned. I stopped at the mine office to ask if they had seen my saddlebag, but didn’t expect to see it again. Just a few miles before the pavement, one of the passing 4x4s waved me to stop, and someone jumped out. It turned out to be Kristap, the Latvian I had met at the San Bernardo hostel on Cerro El Plata! I gave him my contact info this time, so we may be in touch. Who knows, I may even see him again on another peak as I make my way north? I finished the ride back to Barreal in a much better mood, checked into a fancier campground (only lukewarm water, but a kitchen, $5), then bought spare bike parts and some real food. In terms of elevation, gain, and distance, Mercedario is one of the hardest peaks I intend to climb down here, so I was pleased to tag it in 4.5 days with no major difficulties.

Finally back on pavement

Valley from around 6400m