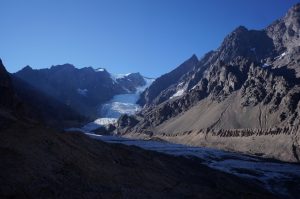 … or, “In his first skirmish with the Argentine/Chilean Andes, Dr. Dirtbag earns a narrow victory.”

Nevado Juncal is a high peak south of the Paso de los Libertadores, the pass crossing the Andes near Aconcagua. When planning long trips, I normally start with a list of primary objectives, then look for “targets of opportunity” to break up the long commutes between these main goals; Juncal was one such. It is thoroughly my style: not quite 6000m, not technical, not on any list, and generally ignored by non-locals, despite being right on the way to Aconcagua. It is also one of the most brutal slogs I have ever done, climbing around 6000 feet of truly horrid scree, leftovers of shrinking glaciers, and penitentes to reach the high glacier saddle east of the summit. Still, the peak is home to the region’s largest glaciers, reminiscent of the Bernese Oberland, and the summit views of these and nearby Aconcagua are stunning, so it was not a wasted effort. 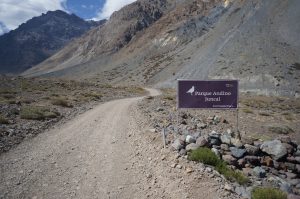 I took my time waking up by the river, fought with the stove a bit, then ground out more climbing toward the Paso de los Libertadores, stopping to take photos of an old guardhouse before turning off just below the switchbacks on the dirt road leading to Juncal. My guidebook mentioned possible private property issues with this route, and indeed I saw signs indicating a “private reserve” ahead; hopefully that meant they would allow bicycle-riding dirtbags to proceed. It turns out that the reserve is basically a park owned by the descendants of one of the American mining companies who grabbed vast tracts of the Andes in the early 1900s, with a visitor center and small boarding house staffed by fairly knowledgeable young locals. The park charges nominal fees for entry and for each night camping, which I happily paid, as I prefer this use of the land to the exploratory mining being done (by another American company) just down-valley. 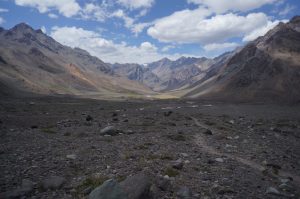 I pulled in early in the afternoon, and was met by Martin, who allowed me to stash my bike in the tool-shed, and was interested to see what conditions I found, as he planned to climb it later in the season. He gave me a radio, took some money, and sent me on my way. I switched from bike- to hike-mode, which takes awhile, then took off up the popular trail to the base of the glacier. The trail passes a couple of “wetlands,” which in this part of the world means “anything green,” then reaches an unavoidable glacial stream crossing. With the significant day/night temperature fluctuations, these crossings can be trivial in the morning and quite severe by evening. This one was a bit less than knee-deep in the mid-afternoon, and safe to ford barefoot.

I continued past the crossing, not sure where I wanted to camp, and eventually gave up on camping at or above the glacier. After a shoe-soaking crossing to reach a non-silty water source, I retreated to a camp just past the water crossing that I later learned is used by the Chilean army. Another group was there, and offered me a tarp when I did not immediately put the rain fly on my tent. There was much miscommunication, which gave me the impression that they were leaving at 5:00 AM to go straight for the summit, some 2850 vertical meters away. That would be long but doable on normal terrain, so I was tempted to try the same. 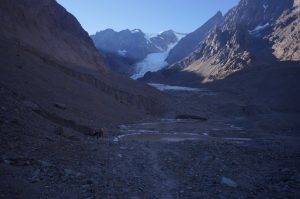 I woke up at 6:00, ate breakfast, and saw that at least part of the military group was still in camp. I (wisely in retrospect) decided not to try to summit in a day, but instead packed up camp and made my way toward the glacier. I passed the army folks roping up at toe of the glacier, and mentally filed them as “clueless” for doing so on a dry, rock-covered valley glacier. After some shenanigans on the rock-covered left-hand side, I finally made my way to the white center, where the going was much easier, and steadily progressed toward the icefall at the head of the valley. 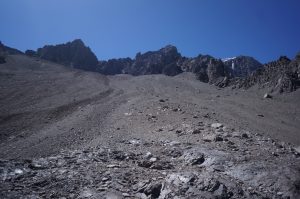 I headed for the obvious break in the left-hand moraine, and found a few cairns and faint traces of trail. Unfortunately, I missed the place where the trail leaves the stream shortly above the break, instead following the creek to where it petered out in a talus-field. Hoping this was the “broad couloir” mentioned in the terse route description, I made my way up, wandering back and forth to find the least-painful path. Unfortunately “least” is a relative term, so I was from time to time reduced to crawling on all fours, or stepping 3-4 times in the same spot until the scree settled. 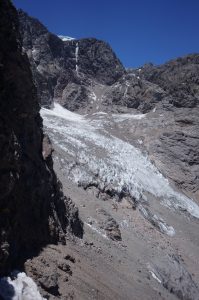 As the terrain above continued to look less hopeful, I puzzled over my topo and realized that I needed to be on the other side of a ridge. I made a horribly chossy traverse, a sketchy downclimb, and found myself clearly on the correct route, right below the penitentes that Martin had mentioned. These were no more than knee- to thigh-deep, so wading through them was not a major ordeal. Unfortunately the glacier-related misery continued above, with loose talus and mud covering old ice in the couloir, and the sides mostly too steep and rotten to be of use. 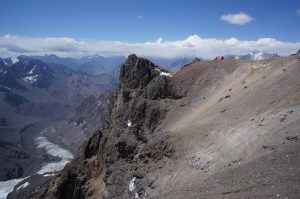 I finally crawled to the ridge to find a few truly spectacular bivy sites. There were no windbreaks on the exposed ridge, but the mountain’s shape seemed to keep things reasonably non-windy. I set up my tent, then went side-hilling in search of liquid water below some nearby penitentes. Most of it was undrinkably gritty, but with a bit of careful class 4 downclimbing I managed to find a relatively clear stream flowing down some rock. I painfully returned to the tent, cooked dinner, checked in with the office (Martin was gone, so I spoke to his partner Belén) and listened to podcasts until I finally went to sleep. 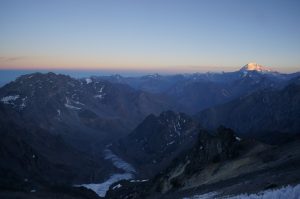 I ate breakfast at first light, then sidehilled around a bit trying to find the “other glacier” that would take me to the glacier saddle leading to the summit. Unfortunately it has badly decayed since my route description was written: the remnant is far too broken to be useful, forcing me onto the nightmare mixture of dirt, scree, and penitentes to its left. These penitentes are the real deal, being waist- to chest-high, and rock-hard in the morning. Climbing penitentes in this condition is an acrobatic process of stepping from saddle to saddle, generally staying above the intervening troughs. 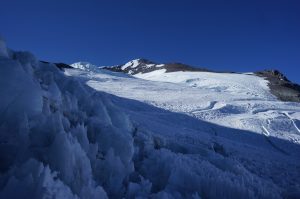 Finally, just below the broad ridge, I was able to get onto the real glacier and put on my crampons. There were two large crevasses, both passed to the left, and numerous smaller ones, mostly obvious and easily-avoided. I stayed on the glacier farther than necessary, hoping that it would be quicker than the volcanic sand and scree it covered. This involved some slightly steep snow and ice, but saved me plenty of mental energy. On the climb from camp to the saddle, I had been climbing so slowly that I wondered if there was something wrong with me. Once on the snow, I realized that the fault lay in the terrain, a mixture of all of the worst things a dying glacier can produce. 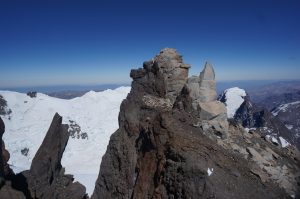 I left the snow and ice near the highest reasonable point, slogging up some sand to intersect a faint trail, which I followed without incident to the summit. Well, “summit”… Biggar’s guidebook states that “the highest summit is the NE peak,” but the western one certainly looks higher both in person and on the map, and is marked on Peakbagger as the summit. Still, the NE peak has a register, and I lacked time and energy to traverse a mile of mixed snow and choss above 19,000′ to tag the other. 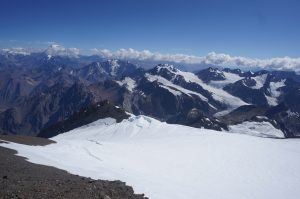 In any case, my summit had a superb view of the large Juncal North glacier, as well as a system of connected valley glaciers to the southeast reminiscent of the Bernese Oberland. It also featured a remarkably fancy register, a black composition book that perfectly fit in a large, metal “Banco de Chile” box. I read the list of names, a handful of parties per year dating back to the early 2000s, added my own solitary entry, then retraced my steps. 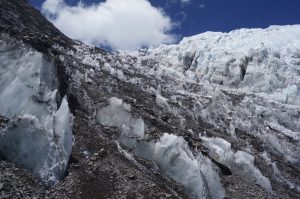 The upper scree descent was as fast as I had hoped, so I followed it as far down as I could before switching to the glacier, which went without incident. Unfortunately, the descent from there to camp was all sorts of awful. Everything had warmed up and melted, so I frequently slid on the mud-covered glacial ice, scratching my palms and having zero fun. Crossing the softened penitentes was more like a fighting game, as I tactically kicked, punched, and elbowed a path using a mixture of the valleys between them and platforms created by my destruction.

Back at camp, I packed up my tent, then made an effort to descent the “correct” route. I followed my ascent route through the lower penitentes, taking advantage of some decent boot-skiing along the way, then found my way through some slabby cliffs below the toe of the retreating glacier. From here the valley split in two, with both forks looking ominously cliffy. I glanced at both, then took the right, hoping that I could traverse out on that side to perhaps reach the old lateral moraine.

I eventually reached a precarious ledge with bulging rock above, from which I retreated after a cautious attempt. I glanced at other options, and was feeling somewhat dismayed when I saw a cairn on the ledge above the one I had tried. This was the key to the “official” route, which exits here to cross the right-hand wall of the old glacial valley. Lower down, I found a more distinct trail, and even some well-built camp spots near the glacier, apparently the 3700m camp mentioned by Biggar. 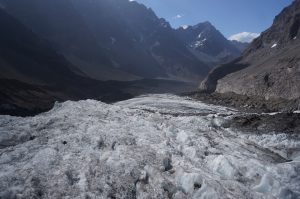 From there, I rejoined my old path near the cut in the moraine, then headed for the glacier’s smooth white center as soon as possible. My afternoon walk down the glacier was much more enjoyable than the previous day’s ascent; as usual, the glacier looked more impressive from above than below. Belén had mentioned that I had a spot at the moraine camp if I needed it, but I knew I could make it to the office before dark, and saw no need to make another camp. The stream crossing was at its fiercest, so I rolled up my pants and forded shoes-on; unfortunately the stream was slightly more than knee-deep this time, so my pants were soaked anyways.

I reached the office a bit before 7:30, where I got into an extended conversation with Belén, whom I had only met by radio. Among other things, I learned that the summit register box, like so much in Chile, is political: the chief of the Banco de Chile, a very wealthy and powerful man, had similar boxes placed on the summits of all the country’s 6000m peaks as an advertisement for his company. Since Juncal was long thought to be above 6000 meters, it was so blessed. We eventually got too cold to keep chatting, so I rolled down the road a bit to camp in a pullout, saving myself a few dollars.

This is my type II happy face