As is often the case this time of year, I find myself bagging peaks that are conveniently close to a long drive, rather than intrinsically interesting. Genoa and Virginia are similar peaks: drive-ups in the summer, close to my route, with a fair amount of prominence, and more interesting in early-winter conditions. 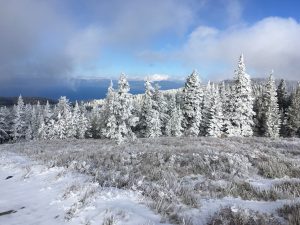 There are a number of routes from the Eastern Sierra to northern Tahoe, one of which is to take Highway 50 over Spooner Summit. I had not been this way in awhile, perhaps not since moving out to take a job in the Bay Area toward the end of the dot-com boom in a previous life. This time I was looking for a half-day run/hike, and Genoa, about six miles south of the pass with almost 2000′ of prominence, fit the bill. 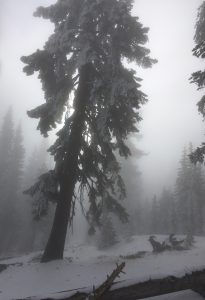 I slept in the summit lot, ate breakfast, then killed some time making cranberry sauce while waiting for the clouds to lift, or at least for it to warm up a bit. Unfortunately neither seemed to be happening, so I eventually gave up, starting south along the Tahoe Rim Trail through the heavily-rimed forest. The TRT is gentle and smooth, and I was not carrying anything, so I enjoyed the experience of running unencumbered for a change. Also, I needed to move quickly to stay warm, even in my mid-weight overshirt and windbreaker, meaning it was probably in the mid-twenties. 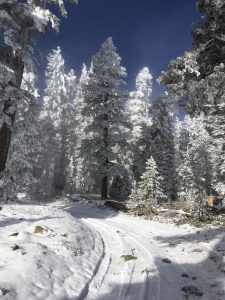 The trail had seen a bit of traffic, but that had dwindled to a single runner by the time I crossed a dirt road three miles out. Surprisingly, however, someone had driven this road since the last snow, so I was able to travel faster on the road. As the road climbed, I got occasional glimpses of the sun to one side, Lake Tahoe to the other. Checking my map, I turned off on the side-road leading to the radio installation on Genoa’s summit. No one had driven this, so progress became painfully slow. The wind picked up on the treeless summit knob, scouring and drifting the snow, and also encouraging me to summit quickly.

I got occasional views of the Desolation Wilderness peaks to the southwest, but the clouds were just a bit too high to give me an unobstructed panorama. I took a few photos in the lee of a building, awkwardly stumbled down the summit boulders to the road, then began the run home. It was slightly warmer by now, and generally downhill, so I enjoyed the return, and was actually able to generate some speed. Well, “speed” relative to my normal plodding. I’m certainly nowhere near matching my mile PR now. 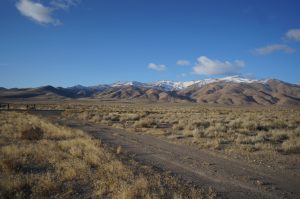 Virginia Peak, northeast of Reno, is another drive-up to antennae. Like many Nevada range highpoints, it is an unremarkable mound covered in sage and scrub, with a fair bit of prominence. Rather than following the antenna road, I chose to come at it from the east, via a dubiously-legal route crossing an Indian reservation near Pyramid Lake. The lake is nearly as large as Lake Tahoe, though lacking in ski areas and kitsch stores. 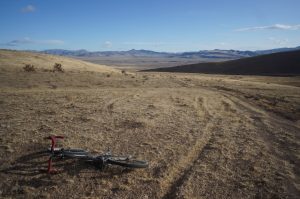 I parked my car across the road from the reservation, then waited for the sun to warm things a bit and for there to be no witnesses before riding the good dirt roads toward Big Mouth Canyon. The road deteriorated a bit as it climbed, but remained rideable until the final split, where the branch I wanted climbs steeply up the ridge to the canyon’s north. I locked my bike to itself, then set off hiking the steep but occasionally-driven road. 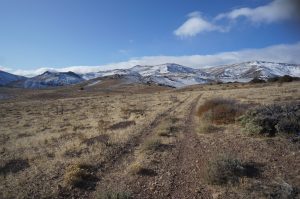 While I was comfortable on the initial climb, a strong wind from the north or northwest made things uncomfortable on the ridge crest. I spent some time scuttling from juniper to juniper, sheltering behind each to warm my hands, then gave in and put on the down parka I had fortunately thrown in my pack. I wished I had also included my goggles and balaclava, but I was reluctant to admit that winter had arrived. With the parka, I was comfortable until I reached solid snow, which began around 6000′ on all but the southern aspects. 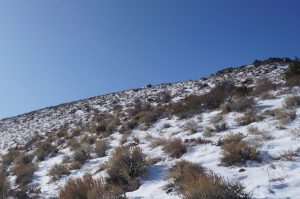 This is where I began to regret my choice of footwear: it was a bit chilly out for thin wool socks and trail runners with scree-holes. Thankfully, it was cold enough out that the snow remained powdery, so it mostly just refroze on or sloughed off of my shoes rather than soaking my feet. With some toe-wiggling and a couple of warming stops, conditions remained tolerable as I made my way up the long ridge. Side-hilling toward a southern slope to get away from the snow, I looked up to see a lone buck looking down at me, seeming remarkably unconcerned for a deer living somewhere he could likely be hunted. I had been seeing tracks for awhile, so I should have expected to see him. We eyed each other for awhile, then he headed over the ridge and out of sight. 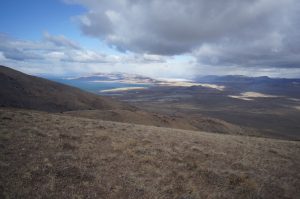 I stayed on the south side of the upper ridge, climbing over and around basalt boulders, avoiding the snow and wind as long as possible, but I finally had to emerge on the summit plateau. I was hoping to pick up the antenna road, but it comes in from the other direction, so I had to alternately hop between rocks and posthole through snow and brush to reach the summit. Next to the building with the FCC notice I found a man-high cairn, possibly left by early surveyors, and an ammo box with a register. Clouds seemed to be coming in from the northwest, so I quickly signed my name and retreated, freezing my left eyeball as I cursed and postholed my way back to the ridge’s shelter. The descent was uneventful other than a brief encounter with a solitary wild horse, and I was back at the car by early afternoon. Time to see how much Nevada I could get out of the way before snow and/or fatigue got the best of me… 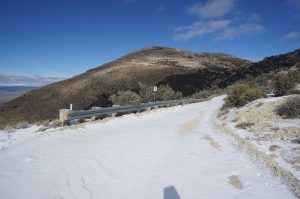 Currant and Duckwater on the left

This one was really scraping the bottom of the barrel, but thanks to poor planning and snow, it was the only convenient thing to tag. It was another drive-up in good conditions; indeed, I probably could have driven the road even now, as the snow was no more than a couple of inches deep. But I wanted to hurt myself rather than my car, so I parked next to the highway and biked to the snowline. From there, it was an easy road-walk to the highpoint, which oddly held only one antenna; for some reason the main cluster was located on a slightly lower bump to the north. I could see familiar peaks in all directions, particularly North Schell to the east, and Currant and Duckwater to the west. 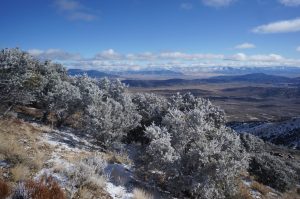 The ride back down to the car was miserably cold. Ely seems, like Alamosa, to be in some sort of cold sink, so it was still only 30 degrees at noon, and promised to dip into the single digits overnight. But it at least has internet in the form of a McDonald’s, so I could catch up on the outside world, and figure out what I could get away with during the upcoming storm.
This entry was posted in California, Nevada. Bookmark the permalink.