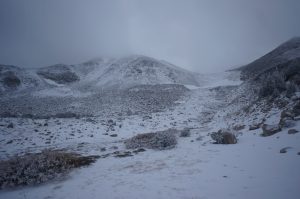 I had hoped to tag Disaster Peak from the Sonora Pass road on my way north, checking off my northernmost remaining SPS peak. Unfortunately the Caltrans site lied: while it claimed that the road was only gated at Kennedy Meadows on the west side, the almost-dry road was actually closed for the season a few miles past the Mountain Warfare Training Center. What would already have been a long 30-mile day along the PCT in the snow now looked completely unreasonable. I camped in a pullout near the closure and considered my options. Looking around on Peakbagger, I saw that I could still reach a couple of thousand-foot prominence peaks from the Silver Creek trailhead. 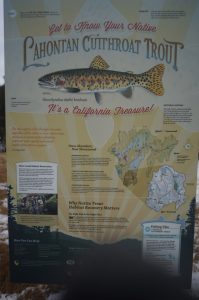 Finding the trailhead proved to be a bit of a challenge: it is at the end of a Forest Service road that passes through the MWTC, with which the guard was unfamiliar. After looking for a way around the base, I returned to the guard station to find that he had apparently talked to someone else who knew about the road. Fortunately the Forest Service is much less aggressive than Caltrans with road closures, so I was able to drive the dirt road all the way to the trailhead, despite the treacherous inch of fresh snow. 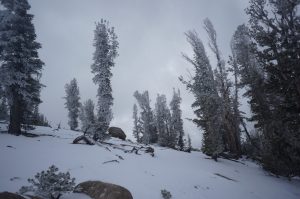 I had downloaded a track from Peakbagger showing a loop up to Lost Cannon, then over Wells to Silver. It appeared on the map to start off cross-country, but fortunately there was a surprisingly good trail up through the sagebrush. The snow gradually got deeper as I climbed, the trail fainter, so I lost it somewhere below the ridge. Between the snow, which varied from a dusting to drifts a half-foot deep, and the underlying sand and krummholtz, it was slow going from there. Thick rime covered the trees and rocks on the ridge, much improving the nearby scenery. “Nearby” was the only kind of scenery I would have for most of the day, as clouds generally hovered below summit level. 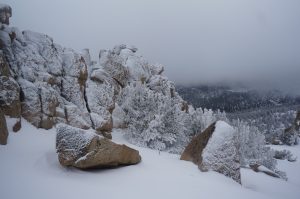 Fortunately I had a map and GPS, because Lost Cannon’s summit is the highest of a number of granite knobs, and not at all obvious with limited visibility. In normal summer conditions, it would be a simple class 3-4 scramble about which I would think almost nothing. However, the combination of fresh powder and rime covering the granite made it much more of a challenge. I tried several approaches unsuccessfully, and almost gave up, before finding a devious route that started on the left side of the peak, then nearly circumnavigated it counterclockwise to reach the summit. I took a picture of the iced-over summit stake, then carefully retreated, my hands freezing from grabbing snowy rocks with fleece gloves. I had not expected to do so much scrambling, and would have been happier in my winter gloves. 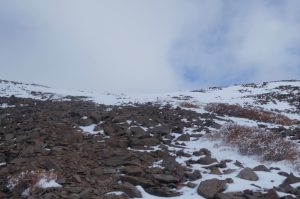 That was more or less the end of the day’s challenges. I had an easy walk down to the base of Wells, then found my way through bushes and carefully hiked up the final loose, snow-covered talus to the summit. The metal summit sign had accumulated a solid plate of ice overnight, which had fallen off with the day’s marginally warmer temperatures. From the summit, I had a long, obnoxious traverse across more loose and snowy talus before dropping across Silver Creek to reach White. Along the way, I managed to startle three snowshoe hares, all of which ran off before I could take a decent close-up photo. I had only seen one of these before, many years ago on my way down Bishop Pass, so they were a pleasant distraction. 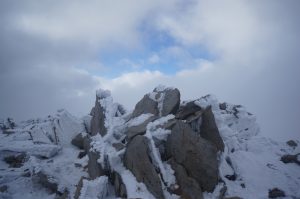 The climb up White would have been straightforward if I had not chosen to try to cross a permanent snowfield just below the ridge. The new snow was neither deep nor well-bonded enough to walk up easily, and I frequently slipped on the old ice beneath, pawing at it to look for edges and rough patches where I could carefully step. Above, a bit more easy sand and talus led to the summit, where I got a brief glimpse of blue sky.

The track I had downloaded continued south along the ridge, but given the conditions, I decided to retrace my steps and return via the Silver Creek trail. I bypassed the permanent snowfield on the way down, but found the loose and snow-slick talus to its side almost as obnoxious. I took a different line through the trees, angling toward home, and found pleasant open woods down to the creek. There was a good line of blazes in places, but the trail was faint to nonexistent, and I lost it going either through or around one of several boggy meadows. I instinctively tried to avoid the worst of the bogs, but my shoes were soaked enough that it did not really matter. I alternately hiked and jogged back to the trailhead, then drove back through the base and down the Walker River into Nevada, land of cheap gas and laundromats with beer and video poker.