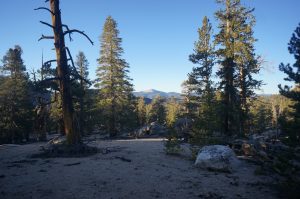 With fall holding on in the Sierra, I decided to take advantage of the still-open Horseshoe Meadows road to bag some minor southern SPS peaks. While I had gone north from this high trailhead several times, I had not yet ventured south, so it would be new terrain for me. Kern Peak can apparently be reached with more driving and less hiking from the south, but with gentle terrain and runnable trails, the 33 or so miles from the north would be manageable despite the short days.

I woke up to find myself unsurprisingly alone in the large Cottonwood Pass trailhead, and waited until after headlamp time to start. The temperature was not bad at the trailhead itself, but cold air had pooled in the meadow, making for a cold crossing toward Trail Pass. I finally reached the sun at the pass, where the PCT crosses east-west along the ridge between Mulkey and Cottonwood Passes, and got my first look at Kern Peak, whose size makes it look deceptively close. I shed a layer, then took off jogging down the other side into Mulkey Meadow. 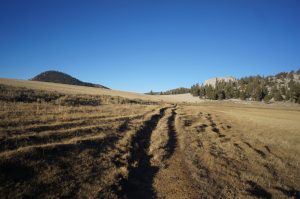 The trail was the usual southern Sierra sand, though not as bad as Cottonwood Pass, as it probably sees much less traffic, though most of that seemed to be horses. There was also a fair amount of cow manure, though none seemed fresh. The cows had, however, managed to create a half-dozen parallel tracks across the meadow, reminiscent of the multi-lane highways around Tuolomne Meadows. I continued west, passing through a gate on my way over a minor rise, then joined the South Fork Kern River, which is more of a creek here, on its way down to Tunnel Meadow. 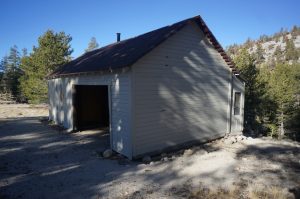 I passed a large, disused corral in the woods, then some dilapidated fencing at the foot of the meadow, before returning to the woods and reaching the Tunnel Station. There I found an abandoned lookout tower, and a recently-painted cabin with an open workspace and padlocks on its multiple doors. The trail branches twice beyond here, with options leading to some other meadows; I took the well-signed but faint branch headed to Kern Peak, which used to house a lookout. 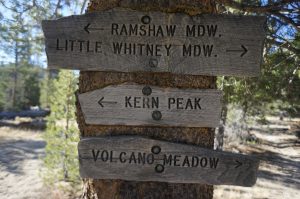 One thing of interest

As the lookout is long abandoned and the peak is only of interest to people chasing the SPS list, the trail through the gentle forest has nearly faded out of existence. It climbs a bit in crossing a gentle arm of the peak, then descends to follow the Kern Peak Stringer — another creek — up the peak’s north side, eventually reaching its northeast ridge. Where it finally breaks out of the woods below Kern’s rocky summit, the trail once again becomes clear. I followed the switchbacks through the sand and boulders to a shoulder west of the summit, then hopped through the boulders to the top. 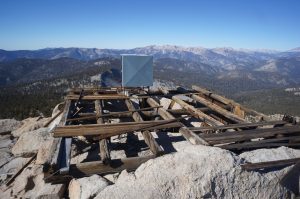 The lookout’s floor and fire-finder were still standing, but its walls and roof had collapsed off to the north. It is well-situated, with long views to Langley, the Kaweahs, and the Mineral King peaks to the north, Olancha Peak to the east, and endless rolling terrain to the south and west. I took my time eating some pop tarts and chex mix, then began the long run home. Complaints from my knee slowed me a bit, but I still managed to jog the majority, and I had plenty of daylight and listening material.

Someone had dropped his driver’s license on the trail (how does that happen?), but I saw no one else until I returned to the trailhead. There I found two groups milling around, but no one matched the photo on the license, so I stuck it in the trailhead sign before rinsing off and driving a few miles to get cell service. Fortunately there are lots of trails leaving Horseshoe Meadows, because while my outing had been a pleasant run, I would not want to do it twice in two days.

One thing of interest