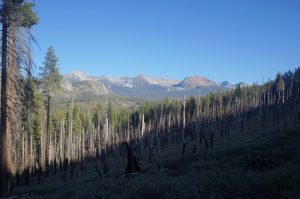 Gray Peak was my last remaining SPS peak in the Clark Range. After failing to tag it on the way out, I decided to do so from Mono Meadows on the way back, making it possible for me to never again drive through Yosemite. It is around 24 miles round-trip via this approach, but quite a bit of that is runnable, so it seemed like a short enough day to tack a few hours’ driving onto the end. I got up before dawn, shoved my bike and trailer back into the car by headlamp, and drove into the park and up Glacier Point road along with a few sunrise photographers, turning off at the Mono Meadows trailhead some miles before the good views. I had slept here before without harassment, but the angry-looking sign warning that cars parked overnight would be towed during the winter season deterred me this time. 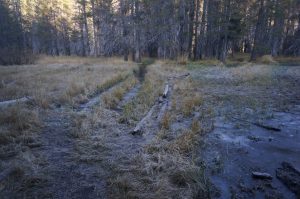 I got started sometime around sunrise making good speed down to what may have been the Meadow: a disgusting, partly-frozen bog with a precarious log bridge across it. With the help of a stick conveniently parked at a tree on one side, I made it across with dry feet, then continued running the descent to the Illouette Creek trail maze. With the help of my map, I made it through the various multi-way junctions, all signed but with some indicating the same destination with different mileages in multiple directions. I eventually made it through the confusion and was headed southeast toward Merced Pass. 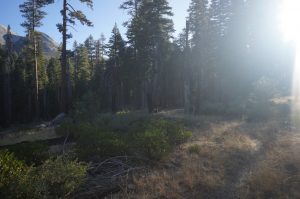 Listening to a podcast while jogging the almost-flat trail through the woods, I was jolted back to reality by a sudden, loud gruuh?! and some movement in the bushes 10-20 yards away. It seems I had startled a mother bear with two cubs, just as much as they had startled me. We were both a bit defensive, keeping a sharp eye on each other, but knew what to do: she sent the momentarily-confused cubs up a tree, while I backed off and talked to her. Fortunately this was relatively open country, so we had room to maneuver. I moved off the trail to the side away from her and she, sensing that the threat was past, brought the cubs back down and disappeared into the woods in the other direction. I almost returned to the trail, then saw why I had managed to startle them so badly: they were in the middle of destroying a bees’ nest in a nearby rotting log. Figuring the bees would probably punish me for the bears’ trespass, I gave them a wide berth through the brush, then continued well up-trail of the scene. 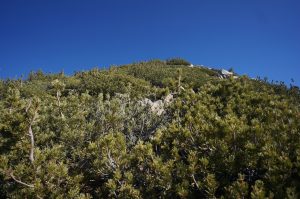 Based on others’ tracks, the route leaves the trail somewhere near Red Creek, following it to one side or the other until reaching Gray’s west ridge. The cross-country was moderately unpleasant, passing through burned areas choked with downed trees and brush, with the ground made unpredictably soft by what I think were rodent holes. I started on the north side, switched to the south, then returned to the north as the ridge rose away from the creek. I found easier travel here, using a strange sort of flat groove paralleling the ridge crest to one side. 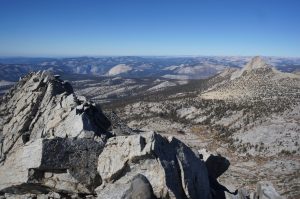 Above a steep headwall, the vague forested thing I had been following became more of a defined ridge, with the summit still looking unfortunately distant. I crossed some flatter, open ground, then gained a thousand feet through a classic Yosemite mix of boulders and evil krummholtz. Only in the final 300 feet did I find actual fun, scrambling along the narrowing crest of the ridge, with cliffs to the north and steep gullies to the south. The summit had good views of the entire Clark Range, from Clark at the north to Merced to the south. Most of the traverse looked like the brush-and-boulder terrain I had just climbed, so doing all the peaks in a go would be both inefficient and infelicitous. Back to the northwest, I could see Mount Starr King and the back side of Half Dome; to the east, Florence, Lyell, and the Ritter Range.

The return was like the trip out, except without bears and bees. I made good speed once back in the trail system, not having to stop and check my map at the intersections, and was soon at the base of the final climb back to the trailhead. I pushed myself to jog some parts of this, and made it back home well before sunset. I talked to a couple of tourists for a few minutes, then drove around and over Tioga, back to the rural comforts of the eastern Sierra.

Red and Merced from Gray

Half Dome on return