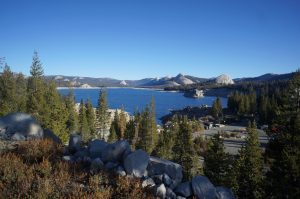 Courwright from the shore road

I had planned something easier after the previous day’s 40-mile trek, expecting to be somewhere between slow and near-useless. I took my time waking and packing at Maxson, then had a leisurely ride around Courtwright Reservoir to the trailhead near its northwest end that people apparently use to reach Three Sisters Peak, my last SPS peak in the area. At around twelve miles and under 3000′ of elevation gain, it sounded like a comfortable half-day that I could combine with a downhill return toward Shaver Lake, a head-start on the long ride home. 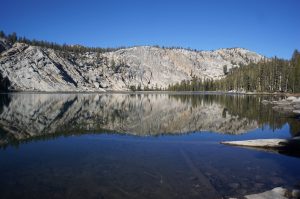 I locked my bike to a nearby locked gate, shoved what trail-food I had left in my pack (mayo bottle, cheese, tortillas), then took off at an ad lib pace. After jogging the initial descent I felt surprisingly energetic, and continued jogging the flats and some of the gentler climbs on the way to Cliff Lake. I slightly overshot the route up the broad ridge west toward Three Sisters, then stopped to get some water at the lake before getting back on track. I found occasional boot-prints and a cairn or two, but there was no established route for this easy and unremarkable peak, and none necessary. 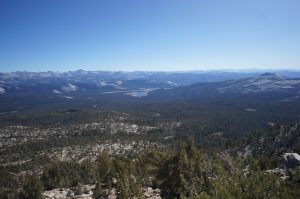 The peak’s west face looked obnoxiously steep, so I headed right, finding signs of passage through the sand and boulders of its northeast face. I sat on the summit for awhile, making myself a sort-of lunch and enjoying the views. While Three Sisters may not be of much interest itself, it is a fine perch from which to appreciate the many domes surrounding Courtwright Reservoir. I did not know it at the time, but it turns out that the area is a sort of “Tuolomne of the Western Sierra,” with well over a hundred single- and multi-pitch climbing routes of all difficulties. Since it apparently lacks Tuolomne’s crowds, it also seems much preferable to me. I did not visit the area during my brief trad climbing career many years ago, but having enjoyed fine climbing, free camping, and few other visitors in the Needles to the south, I suspect that Western Sierra climbing may be highly underrated. 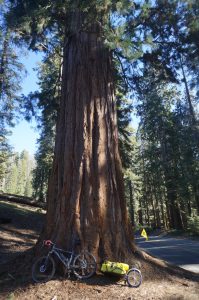 I had a good time running back to the trailhead, passing a couple other hikers probably headed for one of the lakes, then made reasonable time on the ride around the Reservoir and back toward home. While it is downhill to Shaver, there is still a fair bit of climbing, but I made it back to Joe’s Market well before it closed. I bought more chocolate chip cookies (mmm, calories…), but also some heavier, “healthy” things like apples and tuna, as I was headed downhill. The owner/cashier remembered me from earlier, and we talked a bit about my adventure before I saddled up, failed to get WiFi at the library (it was a weekend), and headed down 168.

My goal was to put in more miles toward home, at least getting past the vacation homes and their angry “POSTED no trespassing” signs to find a place to camp. Highway 168 drops dramatically from over 5000′ to around 1000′, and I was unsure what elevation would be most comfortable. I had spotted a likely fire road on my map, but stopped just before it on a whim, camping instead at a helipad around 4000′. While less scenic than Maxson, it was my easiest camping of the trip, with a great big, perfectly flat concrete slab and comfortable temperatures. I dumped the tuna and the rest of my Parmesan into some pasta and watched the sun set over the smoggy Central Valley, then turned in anticipating an easy half-day.

I think I could have returned via Italian Bar Road, but I chose a different route for variety, dropping to the valley via Highway 168, then taking another little-used side-road that meanders through various small towns, then crosses the San Joaquin at the upper end of Kirchoff Reservoir. Climbing back out of the river valley, I learned that I was back in the land of face flies. And goatheads — my tire sealant worked overtime plugging the holes, but the little bits of pressure lost as it did so meant my tires were noticeable softer by the time I rejoined my departing route near the tiny town of North Fork. I had only been gone about a week, but it felt like longer as I passed through familiar terrain on my way back up to Bass Lake.

As I had unfortunately not found long-term parking at the lake, I stashed my trailer at a pullout near the base of Beasore Road, making the final three steep miles back to my car somewhat easier. They were still pretty miserable, as I was tired and low on water, and the face flies were out in full midday force. I finally reached my side-road, pulled out my key fob, and… nothing. Well, crap. As I feared, my battery was completely dead, as was the jump box I carry for such situations. A bit of detective work showed that I had somehow left the tailgate overhead light on. WTF?! I never even use that!

Fortunately I was parked facing outward, and only about 50 yards from Beasore Road, which is reasonably popular. I patiently waved at about a dozen cars before finding one who had cables and was willing to help. It was an ancient Toyota truck, driven by an old man from Fresno wearing coveralls; exactly the sort of car and person I expect to be willing and able to help a fellow motorist. He took out his old cables, hooked them up, and my car started right up (yay, new starter!). We (mostly he) then ended up talking for most of an hour, both of our cars running. He proved to be the kind of fascinating, handy, self-reliant person who makes me doubt my manhood. In addition to his passion for woodworking, he had all sorts of fix-it skills, with tales including splicing an old tow rope to replace a missing fan belt, and cracking an egg into a radiator to plug a hole long enough to drive home. I have seldom felt less useful or capable.

I eventually drove down to the pullout, shoved the trailer and dry-sack in back around my bike, then reveled in my new ability to move at 60 MPH and carry hundreds of pounds without effort, driving down to the nearest town for groceries and gas, then up toward Yosemite to camp just outside the park before doing one final bit of peak-bagging on my way back to the east side. It had been a thoroughly enjoyable and mostly successful experiment.

Courwright from the shore road