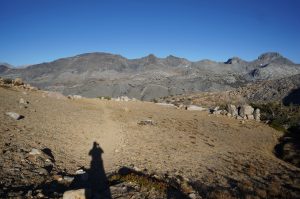 Emerald from Hell For Sure Pass

Henry and Emerald are both remote SPS peaks, west of the Evolution Valley near the center of the Sierra. Bob had done them separately, reaching Henry from Courtwright Reservoir and Emerald from Florence, the latter taking about 15.5 hours. Since they are only a few miles apart as the crow flies, I had long planned to do them in a single trip; and since I had just done the tedious Florence Lake approach for Hooper and Senger, I chose to do them from Courtwright, a route that would consist almost entirely of new-to-me terrain. However, those separating miles include Goddard Canyon (confusingly not home to nearby Goddard Creek), a 4000-foot trench adding an extra vertical mile to the day.

Since I was planning to spend two nights at Maxson, I opted to split my headlamp time in half, putting in an hour in the morning and anticipating another in the evening. I woke to chilly but surprisingly comfortable temperatures, drank breakfast, and shouldered a pack heavy with almost all of my remaining high-energy food. Small hands and a bit of manual dexterity allowed me to secure my remaining food in the bear box, though the local ursines seemed well-fed enough not to have eaten the potato or onions that had long been lying in the open box. With that, I was off down the trail, which briefly coincided with a thirty-plus-mile OHV route to Kaiser Pass that maps.me had nonsensically suggested as the best bike route over from Florence. 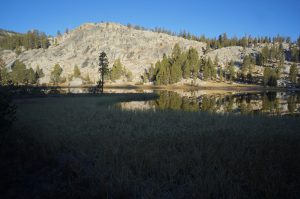 Once off the jeep road, the trail crossed Maxson Meadow/Bog on an old wood walkway, then slowly climbed through the woods. Starting from a dry trailhead, I knew I was low on water, but my water hose was frozen, so I had no idea how much I had left. I stopped to lie down and suck a bit of water out of one creek, but did not want to deal with the cold and misery necessary to get more inaccessible water. Maps.me fortunately did better at routing me to Lower Indian Lake, because I was outside the area of my downloaded maps, and there are a mess of confusing trails in the area. 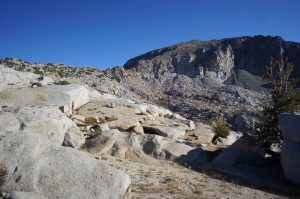 It finally started getting light on the climb away from Post Corral Creek, where the views simultaneously started opening up. In keeping with Courtwright’s dome-rich surroundings, there were pleasant granite slabs breaking up the west-side woods, including Corral Mountain behind and the unnamed peaks flanking Fleming Creek. Water and warm sunlight finally coincided at Fleming Lake, where I found a faint path leading to a place where I could reach open water without wading through a grassy bog. From there, I continued along the trail to the mouth of Lower Indian Lake, then took off cross-country toward Mount Henry, previously hidden by an unnamed and un-surveyed 12,000-foot peak to its south. 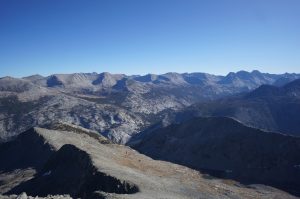 The west ridge looked like it would probably work if I joined it late enough, and the cross-country was surprisingly easy and pleasant, with some nice slabs and relatively little brush or sand. I contoured south of the ridge to avoid some jaggedness, and was reassured to find some cairns on the route I had chosen to reach the final summit slope. Henry lies near the northern end of the Le Conte Divide, with the ridge dropping 4000 feet to the San Joaquin River to the north at the JMT/Piute Pass junction, and continuing jaggedly south past Hell for Sure Pass toward Tunemah. I hoped that, unlike Tunemah, Hell for Sure was not named for its nature. 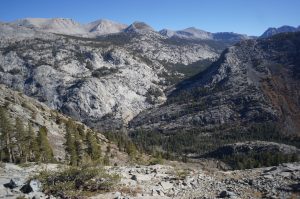 From the summit, Emerald Peak looked distant, Goddard Canyon deep, giving me some pause. However this is what I was here for, what I am meant for; returning to Maxson by mid-afternoon and trying to amuse myself at the deserted trailhead simply would not do. I shouldered my pack, then set off down the steep, loose slope toward the unnamed and unknown lake and creek leading to the San Joaquin across from its junction with Evolution Valley and the JMT. After the initial nasty descent, I found easy travel beneath the mystery 12er’s northeast ridge, then an ominously steepening descent into the Manzanita Zone. 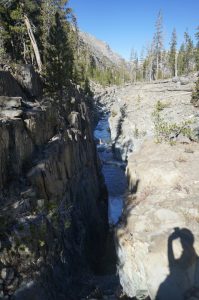 Consulting both my map and the terrain, I cut the corner to the south, skipping the JMT entirely and nearly escaping the brush. However, a final tactical error forced me to bash through some aspens just above the trail; at least I was headed downhill and “with the grain.” I had previously traveled this trail on my escape from Tunemah, and found it much as before: little-traveled but still in decent shape. However I did not travel mindlessly, as I needed to figure out how to reach Emerald from this side; between the vertical cleft often surrounding the San Joaquin, the creek itself, still an unpleasant ford this late in the season, and the steep walls rising 3000 feet or more to the summit, the route was not obvious. 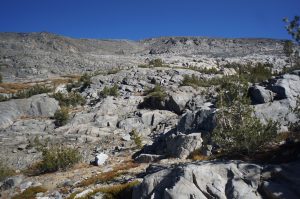 I left the trail near a “campsite” marked on the map before the “pig chute” (whatever that is), and almost immediately found a nice rock crossing. I grabbed some water, then started meandering up the 3000-foot climb, foolishly optimistic as always that I could make something work. Preferring class 3-4 rock to brush, I found a decent line to the weird plateau around 11,000 feet, then continued straight up a seasonal stream toward the peak’s north ridge, thereby avoiding the worst of the upper talus and cliffs. This worked well, and I reached the summit sooner and fresher than expected. 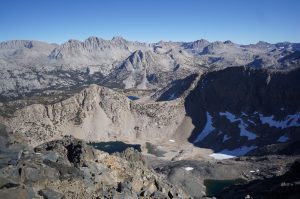 Looking straight across Evolution Valley up the familiar Darwin Bench was a distressing reminder of my proximity to the east side. Still, I took my time enjoying the views of frustrating nearby Peter, McGee, and The Hermit, and perusing the register. It seems that the (mostly familiar) crew had come at the peak from just about every angles, some encountering an easy scramble, others unexpected difficulties. I was reassured to read that one group had found an easy route from upper Goddard Canyon, boding well for my plan to shortcut straight across to Hell for Sure Pass. 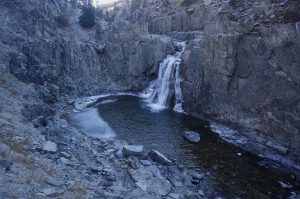 Unfortunately this route was worse than my line of ascent, with more loose talus up high, and more brush and obnoxious cliff bands lower down. I think the party in the register started from higher in the canyon, but I did not want to do the extra distance. The Hell for Sure trail leaves the Goddard Canyon far up-canyon, following a bench around 10,000′ for at least a mile. However, it seemed feasible and faster to cross the river down around 9400′, then climb 600′ straight back up through class 2-3 terrain. I lucked out, easily finding another rock crossing below a freezing waterfall, then climbing a virtual staircase to the trail, which is faint but still usable. 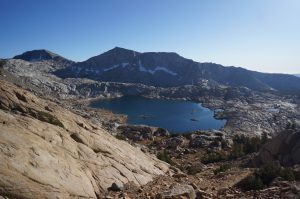 Hell for Sure Lake

There was no question of tagging nearby Red Mountain: I was running low on daylight, and wanted to cover as much distance as possible before headlamp time, when I would become much slower on faint and/or rocky trails. I enjoyed the view of large Hell for Sure Lake against Mount Hutton’s steep north face, finding a surprisingly decent trail on this side of the pass. The trail faded somewhat past Disappointment Lake, but there was still a sign at the Devil’s Punchbowl junction, and I reached the junction with my outward route well before dark.

Other than an ill-conceived attempt at a slab shortcut, the return was mostly uneventful. Near Post Corral Creek, I was startled out of my music-aided coma drive by two men gathering wood to add to an enormous campfire, then put on my headlamp somewhere past the supposed Corral on the final, gradual 600-foot climb toward home. I was energetic enough to jog some of the flatter uphill sections here, but began suffering in the pool of cold air in Long Meadow, and stopped enjoying myself on the final climb. Mindful of the dry trailhead, I filled up on water near what I guessed (correctly) was the last creek crossing, then sloshed and slogged home. Emerging into the lot, I was surprised to find another party messing around next to their pickup truck. They were probably at least as surprised to have me suddenly pop up out of the woods, hacking out a lung and poking at my phone to stop Strava. I eventually found the correct pair of bear boxes, shoveled down some pasta with canned oysters, and fell asleep as the others finished what they were doing and departed to wisely leave the strange woods creature alone.

Peter, McGee, and Goddard from Emerald

Steps toward Hell for Sure Pass

Emerald from Hell For Sure Pass

Hell for Sure Lake