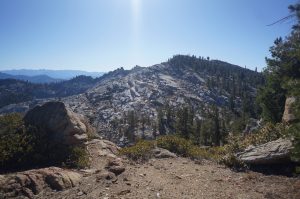 Spanish Mountain is a relatively short and easy hike from the Crown Valley trailhead, and an even shorter one via the Spanish Lake OHV route. Since I had a sort of OHV with me, I figured I could make it even shorter by biking at least some of the road. Unfortunately this road turned out to be messed up even by Colorado standards: I pushed my bike more than half of my time on the way up before stashing it, and while I managed to ride most of the descent, I probably did not save much time, and managed to coat my bike in gross west-side dust. At least I saved some wear-and-tear on my knees… 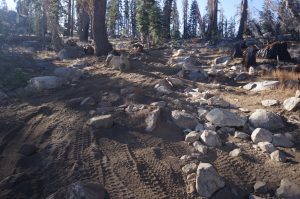 I waited until it was just warm enough, then coasted the brief downhill road stretch to the OHV route, where I almost immediately questioned my decision to try riding it. When assaulted by horses or jeeps, the dirt in this part of the Sierra turns loose and powdery, erodes, and exposes the embedded rocks. This road is steep enough for the damage to be severe, and apparently sees regular enough traffic that it does not recover. I alternately pushed and rode my bike for awhile, then stashed it behind a stump about 3.5 miles up, just past a flatter section, deciding it would be faster to run and hike from there. 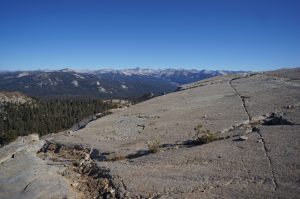 Continuing to the end of the road, I found an outhouse, a few fire rings containing the expected trash, and an obvious use trail leading up Spanish’s northwest ridge. I followed this until it faded and disappeared, then continued to a false summit a bit less than a half-mile from the summit. After a bit of a down-thrash through some brush and boulders, easy slabs led to the large summit boulders. Even though Spanish is a much less impressive peak than Tehipite, the hike was far more enjoyable, with good views much of the way. 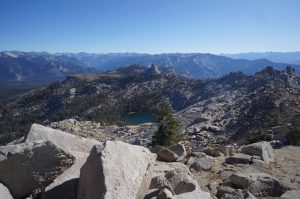 From the summit, I had good views of the Obelisk and Tehipite Valley to the west, the Kaweahs and Great Western Divide to the southwest, and deep into the Kings River valley to the south. I made a decent effort at jogging on the descent, then actually managed to ride a surprising amount of the road, though often little faster than a walk. I returned to the bear boxes, packed up my stuff, then took off with the trailer for the Maxson Trailhead near Courtwright Reservoir. 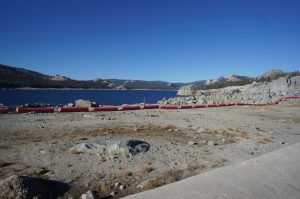 Not paying much attention to the topo maps for my bike legs, I didn’t realize that Courtwright Reservoir was almost 2000′ higher than nearby Wishon, putting it almost on the level of the high east-side reservoirs. Fortunately this road was also better than the Florence horror-show, but it was still a long afternoon climb, and I reached the trailhead with only a bit of time to enjoy sunset on the many domes surrounding the reservoir. 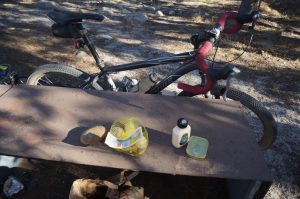 There were many parking spots and bear boxes at Maxson Trailhead (“absolutely no camping!”), but most seemed to be in disrepair. The pit toilets were open and in good shape, though, and there was only one car in the lot, so a flat spot behind one pair of bear boxes seemed like a good campsite. My slight exasperation and disgust at the trash left in the abandoned boxes turned to delight when I found two onions, a potato, an unopened bottle of mayonnaise, and a can of Trader Joe’s smoked oysters in one of the bags of “trash.” Score! The mayonnaise alone was an extra 1700 calories and, at this point, a welcome addition to my bologna or cheese tortillas. I left the potato, but sauteed one onion in a generous amount of olive oil, then cooked some pasta and mixed in lots of Parmesan for an unusually-tasty dinner. Questioning the necessity of “proper food storage,” I set my alarm for early and quickly fell asleep ahead of the longest day of my trip.

How cute… Nazis with chainsaws!