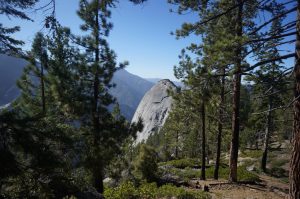 After a mere day and a half of peak-bagging, it was time I tried another 75-mile bike day, from Florence Lake to the Rancheria Trailhead near Wishon Reservoir. I figured that, starting earlier in the day, from a much higher elevation, with a slightly lighter trailer, I could actually pull it off this time. The rolling route still had plenty of elevation gain and loss, but I managed to reach the trailhead with a lunch break and only a few minutes of headlamp time.

I took my time waking and packing at Florence Lake, getting started around 9:00 AM when I thought my hands would not freeze. The road was every bit as rough as I remembered, but I found the climbs almost all rideable, and was back at Kaiser Pass at a reasonable hour. Once past the one-lane part of the descent, I enjoyed the fast, smooth road back to Huntington Lake, then turned left on the high road to Shaver Lake. The road had more climbing than I expected, reaching a highpoint over 7000′ at Tamarack Hill before dropping 2000′ to Shaver, but the good pavement and civilized grades allowed me to make good time.

After several days incommunicado, I finally had cell service in Shaver, which I used to determine that Bob’s Market seemed to be the preferred local store. It had perhaps a slightly better selection of fresh fruits and vegetables than expected, and the usual insanely high prices for packaged goods. I bought the most caloric, least healthy things I could find — a pound of bologna, a block of cheese, a package of chocolate chip cookies, and a Coke — then sat outside the store to drink the soda and make myself a couple of bologna tortillas. I struck up a brief conversation with the owner, who seemed impressed that I was headed all the way to Wishon that evening, then headed to the southern end of town and turned back east toward the mountains.

Fortunately this road was much better than the one leading to Florence, and not very crowded. Almost all of the traffic consisted of large white pickup trucks, about half from various utility and tree-trimming companies, the rest seemingly hunters. The long, uphill ride took longer than I had hoped, so the sun was just setting as I reached Wishon Dam. The temperature dropped suddenly and dramatically as I put on all my clothes and turned on my taillight on its far end, then continued the remaining few miles to Rancheria Trailhead. Seeing that the trailhead itself was dry, I filled up on water from a creek near the final intersection, then finished the last half-mile of dirt by headlamp. There was a truck parked at the trailhead, but I did not see anyone around, so I quickly made dinner and packed for the morrow, once again set an early alarm, and threw down my bivy stack in a flattish spot right behind the bear boxes.

Tehipite Dome was one of two SPS Mountaineers’ Peaks I had yet to climb, the other being the Hermit, whose summit block proved too hard last fall. It is an impressive sight from the south, where its most photographed side rises 3000′ or so from the deep and remote Tehipite Valley. From the north, however, it is a small bump at the end of a dusty 14-mile trench, invisible in the forest until you are about 20 minutes from its summit. 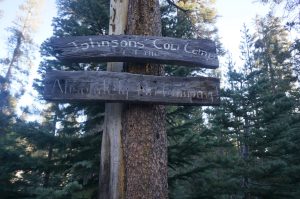 I stashed my dry-sack in the bear box, left the rest of my stuff behind the bear boxes, and started from the Rancheria Trailhead by headlamp. I knew I would see this part of the trail at least once, and I figured once was enough. The trail climbs a bit, then drops on its way past Crown Rock to Crown Valley, home of the famous Cow Camp, where there is ABSOLUTELY NO CAMPING! (Perhaps this rule does not apply to cows.) From there I dropped still farther, crossing Crown Creek and entering Kings Canyon with views of Kettle Dome to the north, a much more impressive formation than Tehipite from this direction. 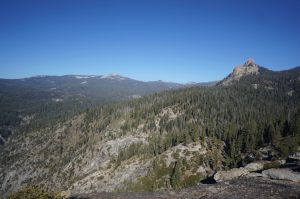 After following the trail to a saddle, I left it to make my way cross-country through several small drainages to Tehipite’s north ridge, from which I could finally see the summit and the upper parts of Tehipite Valley’s south side. Unfortunately the smoke on this day was the worst of my entire trip, obscuring the least-often-seen and possibly most-impressive views I would have. The route up Tehipite’s summit was fairly obvious: start off on a sloping ledge to the left, turn uphill at a tree, then sort-of mantle onto a short third class slab which leads to the summit plateau. There was a faded and dubious-looking sling on the slab, which I would have cut and removed if I had a knife. I instead pulled it up after me and left it at the top, to discourage anyone from pulling on this dubious and unnecessary handline. 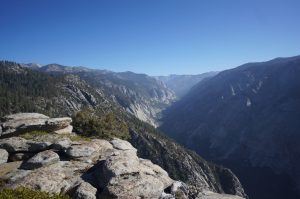 The summit register was more or less evenly split between Real Climbers doing hard routes on the big side, and peak-baggers like Yours Truly sneaking up the back side for SPS points. The long approaches for either deter the crowds, so I recognized most of the names. I sat around for awhile taking in the views of the Tehipite Valley and the long, deep upper valley of the Middle Fork Kings River, which is still a major internal Sierra divide far upstream where it passes through Le Conte Canyon between the Palisades and the Black Divide. 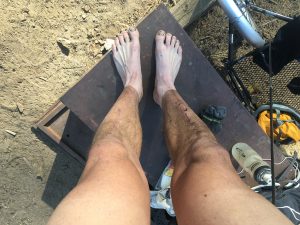 The return was uneventful, and I found my stuff unmolested at the trailhead. I rinsed off as much of my dirt tan as I could, packed up, then filled up on water on a short ride down to the Crown Valley trailhead, where I planned to start the next day’s hike/bike to Spanish Mountain. Looking through Tehipite’s register, and at the map later, I realized that I could have done both peaks in the day. However this would not have saved me any time, as I planned to ride to Courtwright Reservoir the next day. I set up camp in the empty trailhead parking lot, then almost regretted it as truck after big, white truck crawled by creepily slow. I at first thought they were rednecks checking out the outsider, but later realized that they were just hunters looking for deer foolish enough to venture within rifle-shot of the road. It would be another cold morning followed by a much shorter day, so I turned off my alarm before settling in for the long night.