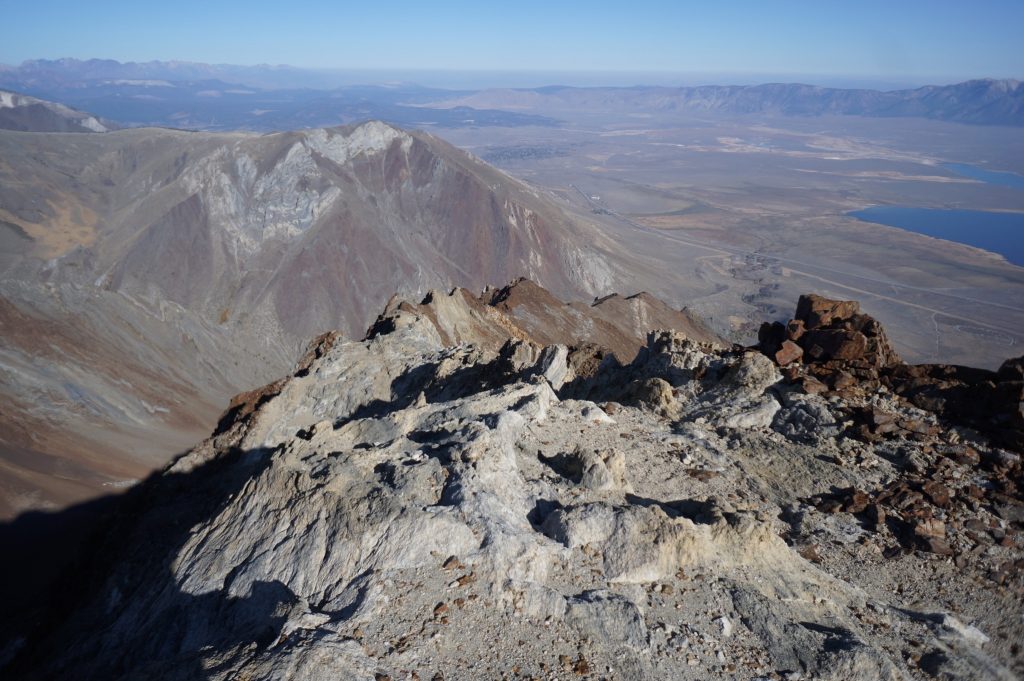 Nevahbe Ridge is a long, colorful, chossy ridge above Crowley Lake, connecting the southern lateral moraine of the old McGee Creek glacier to Mount Morgan. It was supposed to be a decent class 2-3 scramble, and I had intended to do it with a couple partners over the past year, but ended up doing it solo while I was up near Mammoth. It turned out to be more fun than I expected, with plenty of crappy choss, but also some fun scrambling if one stays along the crest, particularly around “Nevahbe Point.” The descent into McGee Creek was miserable at times, but much better than my recent trip to Pyramid. 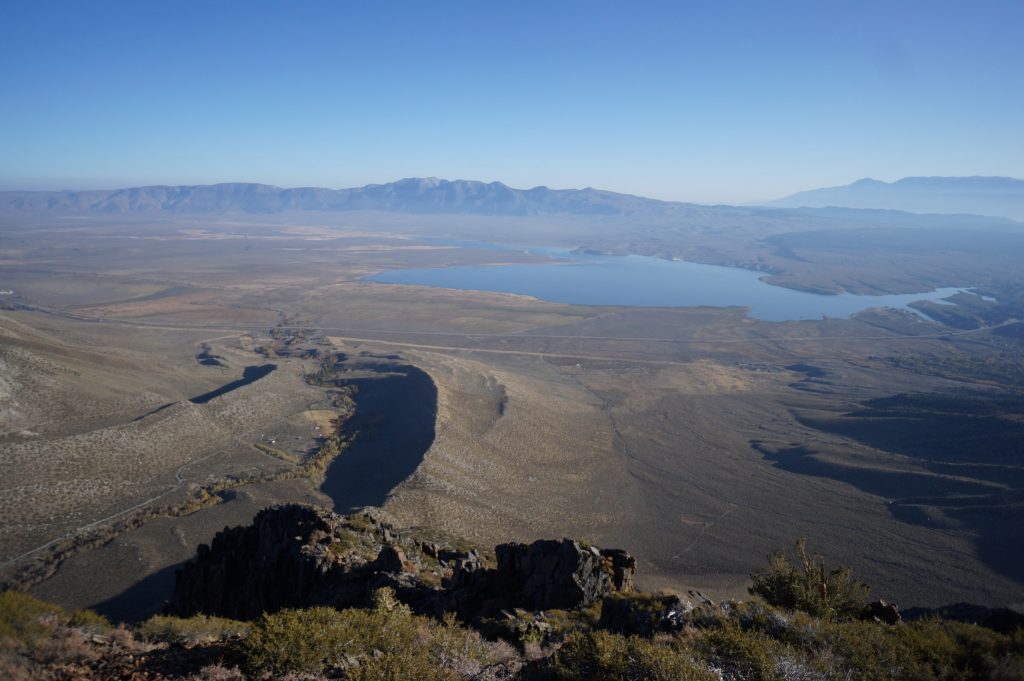 When I pulled into the McGee Creek trailhead around dark, I thought I would have the place to myself. However, a guy in a Sprinter pulled in about fifteen minutes later, jockeyed it around to level it with some wedges, then spent a creepy amount of time staring at the back of my car by headlamp (remembering my license plate number?). I ignored this breach of trailhead camping etiquette, finished reading the articles I had downloaded earlier, and managed to get a decent night’s sleep. It seemed slightly warmer up in the canyon than down in the flats by Crowley Lake where I had slept the night before. 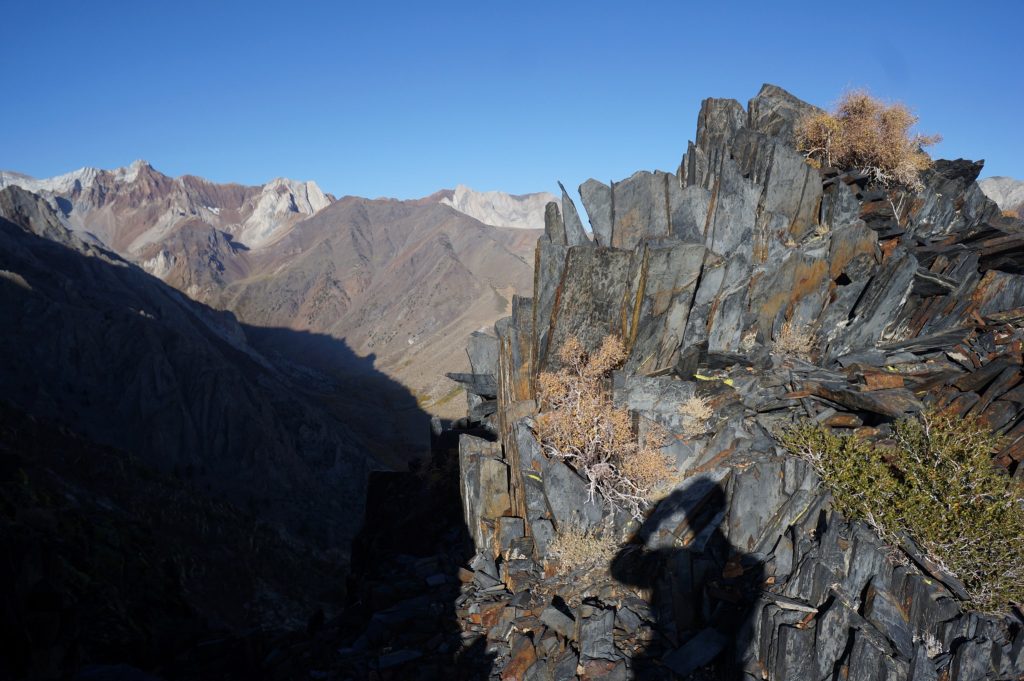 Secor mentions in passing that Nevahbe Ridge can be reached by climbing a steep chute behind the pack station, so I jogged back down the road a bit, hopped across the creek on a convenient rock, then bashed through sagebrush and other desert scrub toward a broad talus gully. The talus seemed to suppress the worst of the brush, and was more stable than it looked, so the initial grind was long, but less painful than I had feared. I reached the ridge on a sort of northern spur, and began climbing just left of the narrow and blocky black crest. The route seems to be popular enough for a faint trail to have formed in some sections, including here, so I had no trouble with the lingering desert scrub. The black rock ended with some fun class 3 scrambling, and the ridge turned red and broader; I hiked up a switchbacking trail toward the next rocky area. 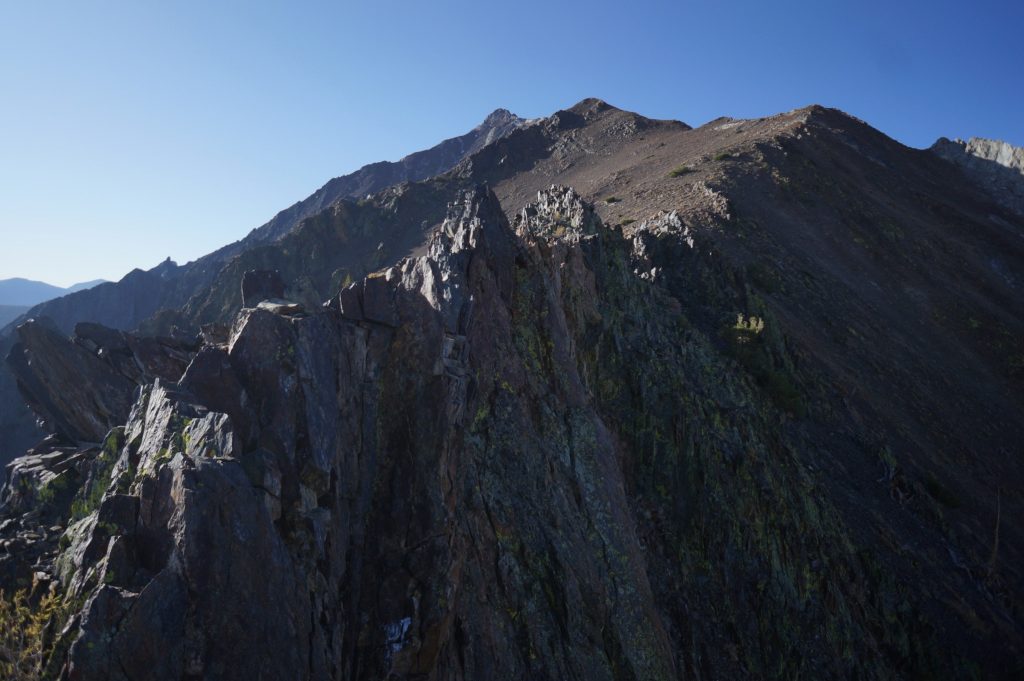 The climb to Nevahbe Point felt long, with many false summits and short class 3 sections, but I was enjoying the scrambling, and the view behind me of McGee, Morrison, and the region’s other colorful peaks was a pleasant distraction. I found two registers on the point, with a surprising amount of local traffic including several familiar names. The hike/jog over to Morrison was shorter than I had feared, but more annoying, with a mixture of sand and sharp, uneven large talus, including a “chicken head” that actually looked like one. Stepping over one such block in a hurry, I manage to bash my shin badly enough to bleed, but a few choice curses fixed the problem. 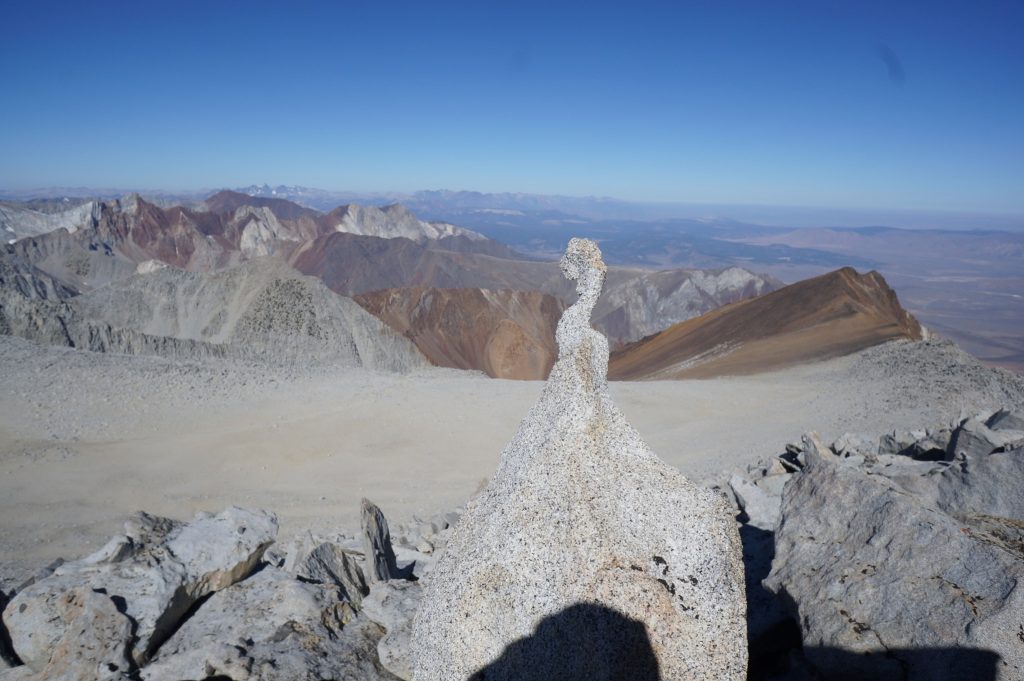 I was surprised to find only a couple pages of register entries between now and my happier, easier visit last fall. I added my name again, then moseyed over to the summit on the other side of the plateau, which looks almost as high as Morgan and is incorrectly labeled “Esha” on Peakbagger. I could have skipped it, but doing so would not have saved much time. 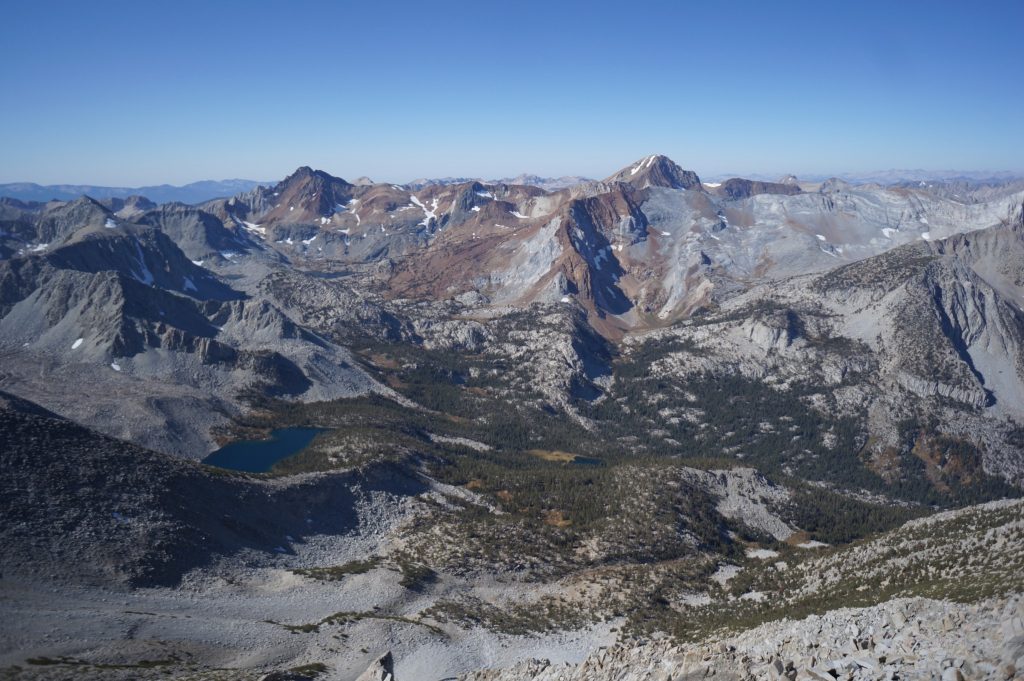 On the map, it looked like I could descend a ridge to the northeast, then drop down into a tributary to McGee Creek. However, the ridge looked brushy and annoying, while there was a nice-looking sand- and talus-slope on the other side. The slope was not quite as nice as I had hoped, with some large “surprise surfboard” blocks waiting for the unwary, but it was mostly smooth going on alternating talus and sand. Rather than heading toward the supposed trail at (yet another) Grass Lake, I turned right, following a creek-bed leading toward the main trail lower down. I stayed mostly on the right-hand side, preferring pleasantly open woods to the vicious willows in the bottom. Only near McGee Creek was I screwed, forced to bash my way through aspens for the last hundred or so vertical feet.

Once on the trail, I took off at a jog that soon became a run. This being a holiday during leaf-peeping season, there were plenty of people out with their cameras, and even one carrying her lazy dog in a pack. I vaguely noticed the foliage, but was more focused on maintaining a decent pace on the gentle descent to the trailhead. Back at the now-full parking lot, I had a late lunch, then headed down the hill toward Bishop. I had run out of things to do in the area, and was tired of the cold nights.