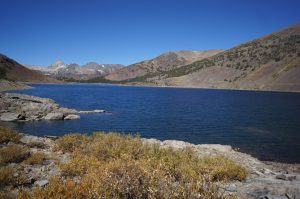 I wanted to make the most of the long drive up to Yosemite by spending a few days tagging random peaks around Tioga Pass. My first targets were Shepherd Crest and Sheep Peak. I thought they fit well thematically, and could make a nice loop by starting at Saddlebag Lake, traversing Shepherd Crest, dropping south to climb Sheep and its unnamed sub-peak, then climbing over the saddle south of Conness to return. I had plans for a couple more days in the area afterwards as well. Unfortunately, a combination of cold and wind forced me to lower my ambitions on the first day, and then car trouble scuttled the rest of my plans. Such is life.

I had just as cold a night as expected up at the Saddlebag Lake trailhead, with only one other car-camper for company, and took my time over breakfast and coffee before stubbornly setting out wearing all of my summer mountain clothing. It was a cold, windy, shady hike/jog around the lake, though it was almost pleasant once I reached the sun near Greenstone Lake. I was both worn down and hungry from the previous day’s unusual amount of flat running “down” Lyell Canyon, so I walked where I would normally have jogged, and ate about half my food. 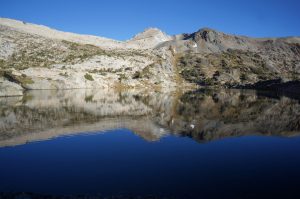 At the south end of Steelhead Lake, where I expected to start the cross-country, I instead found a fairly clear use trail heading northwest, almost directly toward Shepherd Crest. The trail disappeared in the final talus below the northern end of the ridge connecting it to North Peak, but the talus and sparse krummholtz did not offer much resistance. The wind, however, picked up unpleasantly, forcing me to side-hill left of the ridge for some shelter. 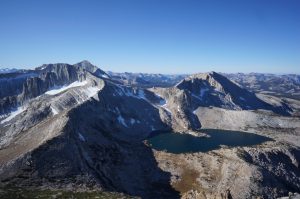 North, Conness, and Sheep from Shepherd

I headed straight up where the rock turns darker gray near the summit, quickly grabbing the register before hiding below the ridge to read it. I saw a couple of familiar names, added my own, then quickly put it back in its place. The wind seemed to be getting worse, with knock-you-over gusts across the ridge; clearly traversing the Crest would be miserable. I instead miserably retraced my steps, hating the wind until I was finally sheltered below the Shepherd-North ridge. 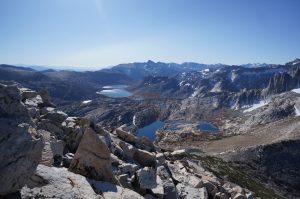 Saddlebag Lake and Dana from Shepherd

With lots of day left, I decided to tag Tioga Crest, a 1000-foot prominence peak on the other side of Saddlebag that I had planned to save for the morrow. I followed various trails almost to the north end of the lake, then went cross-country up the peak’s southwest ridge, following various game trails up mostly easy terrain. The supposed highpoint is on the far end of the long east-west crest, which I again traversed well below before heading straight up to the summit. 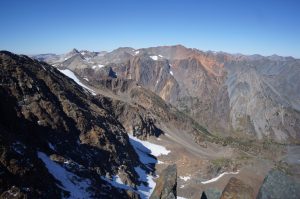 Oddly, though Tioga Crest is slightly higher than Shepherd Crest, the wind was slightly less bad. I admired the drop into deep Lundy Canyon to the north, which held a substantial amount of snow on its north-facing slopes, and chossy, colorful Excelsior Mountain on the other side. I was pleased to see that the previous visitor had been fellow New Mexican and wanderer Guy Dahms, who I almost feel I have met after seeing his name on so many summits. The descent to Dore Pass and Saddlebag Lake was all at a pleasant angle, but not conducive to scree-skiing, so it took longer than expected. I should have jogged the trail/road around the east side of the lake, but felt more like walking.

I ate a late lunch, then looked around for an easy afternoon peak, settling on Gaylor Peak, just outside the park entrance station. I turned the key to start my car, and… click. I waited a bit, then tried again with the same result. I pushed and rolled my car into the sun, gave the engine a chance to warm up, and tried once more, with the same result. Shit.

Since it was downhill from where I was to the Mobil station, I figured that if I could coast I could reduce the cost of the tow, and perhaps even push-start my car. The first obstacle was getting out of the parking lot, which had a slight flat/uphill section. After some experimentation, I found that if I chocked the wheels with wedge-shaped rocks, I could rock the car back and forth to gain ground, quickly kick the nearest wheel’s chock forward, then walk around the car to advance the others. Sometimes I would gain only an inch, sometimes six or eight. I had about twenty feet to go to reach the downhill, but I also had nothing else to do all afternoon, and could use the strength training.

I had been doing this for a bit over an hour, and wasn’t especially interested in help, but when one of the other hikers noticed what I was doing and offered, I did not refuse. With two of us pushing bobsled-style, we quickly got the car over the hump, and I jumped in to steer and brake. Driving was a bit more work without power steering or brakes, but perfectly safe at 20 MPH or less on the way down toward the Tioga Pass road. Unfortunately, there is one flat stretch about a half-mile before the intersection that was too long to coast. With my last momentum, I pulled to the side of the road, then prepared for another cold night, preparing myself to bleed money the next day. Cars suck sometimes.

North, Conness, and Sheep from Shepherd

Saddlebag Lake and Dana from Shepherd

This entry was posted in California, Meta. Bookmark the permalink.

4 responses to “Shepherd and Tioga Crests”