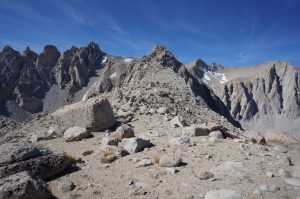 Rosco with Comb Ridge and Le Conte behind

“Rosco Peak” is a ranked 13er between Lone Pine Peak and Mount Le Conte, named for Brian French’s late and well-loved dog. I had driven down to Lone Pine to help with Ryan’s FKT on the Badwater to Whitney bike ‘n’ hike, and wanted to make some more use of the 60-mile drive south from Bishop. Rosco was one of a couple of peaks in the area I had yet to climb. My original plan was to start up the 5.6 northeast ridge of Lone Pine Peak, then traverse around the Meysan drainage to Candlelight and down to the Portal. However, I was tired after a late return from Whitney, worn down from the several preceding long days, and looking at a long drive north, so I opted to just tag Rosco.

I sent some correspondence at the scenic pullout at the mouth of Lone Pine Canyon, then parked on the shoulder at Meysan, shoved a deliberately minimal amount of food in my pack, and hiked through the shuttered summer homes to the sandy Meysan Lake trail. With a relatively short day ahead, I shunned aggressive music in favor of podcasts as I plied the nearly-flat switchbacks up to Grass Lake. 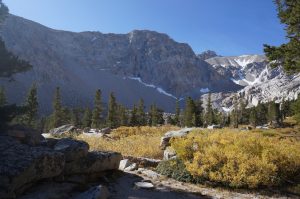 Rosco from near Grass Lake

I left the main trail to make my way toward Lone Pine Peak’s unpleasant standard route, finding occasional cairns and bits of trail as I made my way through the woods and willows past Grass Lake’s several outlet streams. The route climbs a steep sand-and-talus gully to the plateau between Lone Pine and Rosco. This gully sees regular landslides, which prevent it from stabilizing. A down-trail has formed that is decent for scree-skiing, but useless for ascent; the best tactic is to stick to the boulders to the left. I slowly made my way from rock to rock, then crossed right to climb a bit of third class toward the plateau in Rosco’s direction. 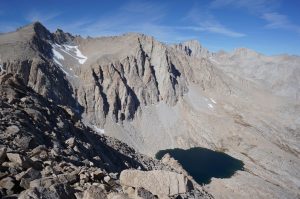 I stayed on or left of the ridge on my way to the peak, fighting through several false summits, getting around the vertical backside of one via an exposed class 3-4 traverse. It was slow going, and while I had fine views of Owens Lake, Comb Ridge, and Whitney, I did not appreciate a minor peak putting up such a fight. I eventually reached the summit to find a register containing mostly the names of Sierra Challenge people. The sky was clear, and the weather was warm and calm; my mood improved as I took my time eating the last of my food and surveyed my surroundings, appreciating the 10,500 feet of relief between Whitney and Lone Pine.

I chose a better route on the return, traversing ledges left of the ridge to avoid most of the difficulties. Trying to cut the corner into the chute, I got myself into a bit of trouble on some steep slabs, but found nothing harder than class 4 (and a rap anchor left by some climbers with no need to rap). Once in the chute, I carefully plunge-stepped down the use trail, which was mostly sandy, but had the occasional treacherous stretch of hardpack. Back on the Meysan Lake trail again, I jogged most of the way, taking the massive sand shortcuts to make the horizontal switchbacks bearable. I was back at the car by early afternoon, where I ate lunch above the sweltering valley before heading north.

Rosco from near Grass Lake

Rosco with Comb Ridge and Le Conte behind