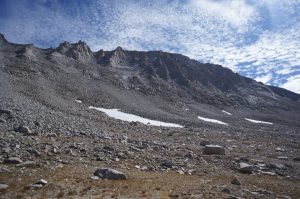 Shepherd Pass is probably the most popular of the big Sierra east-side passes, and possibly the least painful, despite having a 500-foot wrong-way section I call the “dreaded sand hill” that one must climb on the way down. I have been up it many times, including for Williamson and Tyndall back in my pre-Dr. days, the Great Western Divide peaks, and Junction during an early Sierra Challenge. Polychrome, Tyndall Southwest, and Versteeg were the last three peaks I had left to climb out of the pass, the first two being ranked 13ers, and the last a bump between Tyndall and loathsome Lake Helen of Troy. Though the three peaks are not connected, I managed to stitch them together into a lollipop passing through the scenic and rarely-visited upper Wright Creek drainage behind Tyndall. To my surprise, the mostly-pleasant outing took less than twelve hours. 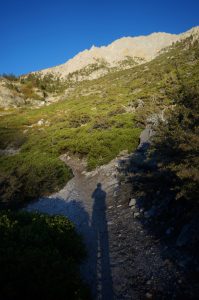 I set my alarm for 4:30, but woke around 3:00 and, as is often the case, lay awake brooding until it made no sense to try to go back to sleep. Instead, I took my time over coffee and breakfast (eggs and beans), then started up the trail by headlamp at 5:00 as someone else packed in the parking lot. The creek crossings were straightforward this late in the season, and I was soon hiking the endless switchbacks to the Symmes Creek saddle. 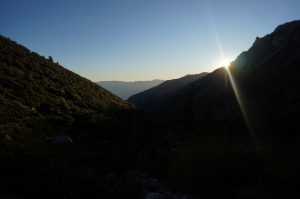 I topped out around 6:30, and was able to stash my headlamp on my run down the south-facing slope. The red glow of sunrise appeared on the top of Williamson and the crags north of the pass, and I eventually reached the sun about an hour later on the climb toward Anvil Camp. The trail had been badly washed out in the decade since I used it, and rebuilt a few years ago to climb around the resulting gully, adding another short wrong-way section. I passed a man reading in his tent at Anvil Camp, and a small tent city in a meadow a short ways above. 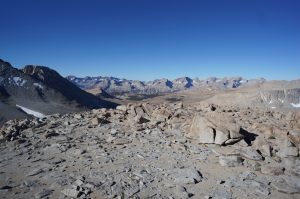 I pushed myself on the final climb up the headwall, and was pleased to reach the pass in under four hours. I took the mandatory photo of Tyndall’s slabby northeast face, then vacillated for a few minutes before heading for Polychrome, grabbing water at the nearby tarn as I passed. The peak’s north ridge was a straightforward boulder-hop leading to a surprisingly broad summit with a few boulder-piles that could be the summit. Climbing what looked like the highest, I found no register, and stopped to eat an Epic bar. While they are normally an overpriced luxury, I found them for 50 cents apiece at Grocery Outlet, making them almost as cheap as tuna as a source of protein. 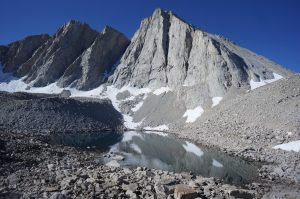 Afterward, I climbed another nearby blob to make sure I had tagged the highpoint. This one was trickier, with some delicate moves onto a fin and a step-across. From there, I made a quick sand descent toward the rim of the Williamson Bowl, where I found a surprisingly well-defined climbers’ trail. Things have changed since I first visited in 2007. I followed the trail for awhile, then left it toward Lake 12,247′ and Versteeg’s standard north ridge. 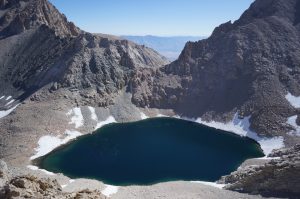 I found stable talus and slabs for most of the way up, but it became hideously loose near the top, and my curses rang from the cliffs around the Williamson Bowl. I eventually made my way to the northeast ridge, which had a good view of Lake Helen of Troy and stable “Colorado class 3” rock. Remembering Bob’s trip report, I knew that the easternmost pinnacle was highest. There I found an ammo box with the register, containing entries from familiar names and also the nearby backcountry rangers. I was encouraged to see that people had come up the southwest side, since I was about to descend that way. 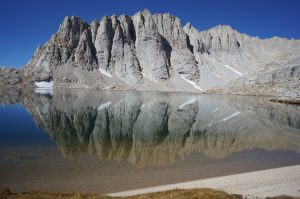 I sent a few text messages, then dropped down the first chute, which was loose in a way that made scree-skiing impossible. I was able to slide a bit when the chute opened up lower down, but it was still slow going; at least I hadn’t tried to come up this way. My senses told me that the slope I was on would cliff out, so I traversed right and followed the next rib and gully, finally descending horrible loose talus to reach the grass near Lake 11,959′. I spent some time admiring the reflection of the thousand-foot crags of Tyndall Southwest’s south ridge, then traversed around its toe to reach the easy way to the summit. 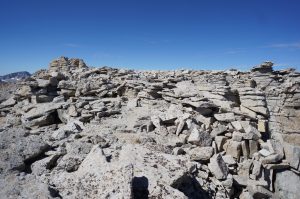 The slope turned out to be an unpleasant sand-pile studded with boulders. I made my way from rock to rock, trending right to get closer to the ridge where there were more rocks. After gaining weight and losing fitness in the fallow period after Peru, I have been pushing long days and shorting my food a bit (e.g. about 2500 calories today), and my pace was suffering from both factors. I eventually slogged to the summit, which is a surprisingly flat plain with several “pancake stacks” of granite. Fortunately someone had been kind enough to put a cairn on the highest, so I did not need to wander around checking out the others. The register was a nice SRC box containing some sheets of paper from the 2012 Sierra Challenge and nothing to write with. 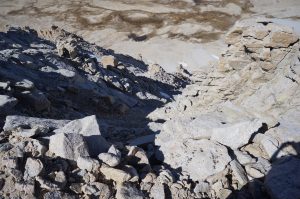 I knew that the descent west and north was class 1-2, but that would take me in the wrong direction. Instead, I headed down one of the chutes to the north, (over-) confident that I could make it work. I wove between the two easternmost chutes and the separating ridge, eventually taking the slabs to the right where the angle lessened closer to Tyndall Creek. I grabbed some water, then hiked the mile or so back to Shepherd Pass. 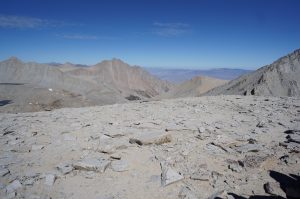 The section from the pass to Anvil Camp is runnable in places, but too rocky for real speed. Below that, however, things get fun. I jogged and hiked to the far side of the washout, then took the massive shortcut to save a half-dozen switchbacks before cruising down the slightly sandy and very runnable trail to the base of the sand hill. I had saved a sandwich for this final obstacle, and it gave me enough energy to maintain a respectable pace on the climb to the Symmes saddle.

The almost 2000′ of near-horizontal switchbacks into Symmes Creek sucked as much as I remembered, but I doggedly kept up a decent running pace out of habit. I met a backpacker just past the first stream crossing, and planned to run right past. He seemed talkative, though, and I had no real reason to hurry, so we talked for the final hike along the creek. It turned out that he had climbed all over the world, and had been coming to the Sierra since the 1970s. With a trad climbing background, he was a solid scrambler, having recently done the north ridge of Lone Pine Peak (5.6) in boots. We talked some more at his camper, then took off to find flat spots in the desert to sleep.

Tyndall from the pass

Wright Creek from near Tyndall SW