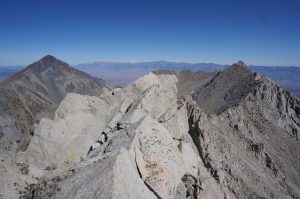 Tom and Basin from Basin SW

Pine Creek is blessed with three trails — Pine Creek Pass, Morgan Pass, and Gable Lakes — and I had yet to use the last. I had taken it in previous years for Four Gables and Gable Lakes Peak, leaving no logical and significant peaks to climb that way, so I had to get creative. We had met Dan and Denise returning two days earlier, and Dan had suggested a loop over Four Gables and back via Pine Creek Pass. I did a variant of this, adding on nearby “Four Gables SW” (unranked) and Basin SW (a ranked 13er) to be able to say I had climbed something new. 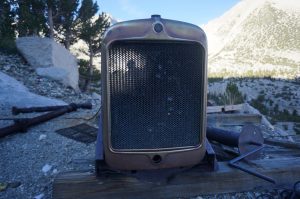 The early-morning wind seemed to have cleared the cold air out of the valley, so it was fairly comfortable when I started up the steep Gable Lakes trail around 6:45. Being a morning person, I was annoyed to look at my calendar and find that daylight savings time lasts another month. I saw headlamp time in my future. I plied the familiar trail past the tram towers, then into the upper basin where it flattens out for a bit and becomes overgrown in places with willows and manzanita. I lost it between the cabin and mining machinery, then regained it to wind through the krummholtz to the first lake. 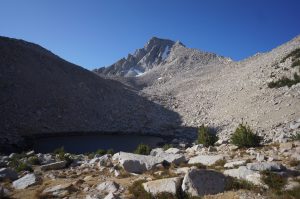 I boulder-hopped up to the second, where I stopped in the first semi-sheltered sunny spot to get water for what was likely to be a long dry stretch. A bitter, almost eyeball-freezing wind eddied through the valley, hitting me unpredictably and keeping me in hat and gloves. I passed some frozen cascades above the final lake, then took the same angling route toward the ridge that Bob and I had used for Gable Lakes Peak. While it is normally better not to side-hill, there is a sort of trough in the talus leading to the final notch that is easier than taking the ridge.

Once on the ridge, I tried to stay on the sunny and less-windy east side for the final few minutes to the summit. I found no register, but was happy to find a sunny, sheltered spot with my first cell reception in three days. I replied to some emails and texts, then turned my phone back to airplane mode to save battery. 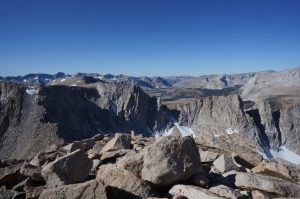 Four Gables is a short distance away across a deep and unpleasant-looking gap that has dismayed me in the past. However, it is not as bad as it appears: the descent is fairly easy on sand to the left, and the climb is mostly solid other than a bit of wretched sand near the top. Four Gables’ official summit is uniquely pathetic, being the lowest of three corners of a broad, sandy plain. I had even mistakenly moved the register to the highest corner the first time I climbed it (sorry!). I bypassed the summit boulders to stroll across to the southwest corner, which I had not yet visited. 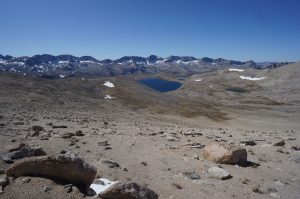 The bitter wind was coming consistently from the west, so I quickly checked out the views toward Royce Lakes and Pilot Knob, then found a sheltered spot to have a snack and decide what to do. I could traverse the line of unranked peaks toward Pilot Knob, head to Pine Creek Pass via the first saddle to the west, or make a two-mile third class side-trip to Basin Southwest, one of my few remaining ranked Sierra 13ers. It was still early, and I had come all this way, so I decided to head for Basin. 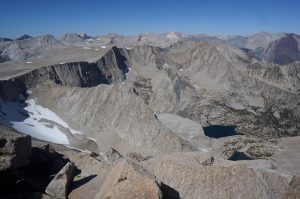 I dropped down to the southeast, then side-hilled around the gentle sandy valley above Desolation Lake, aiming for the bump where Basin juts east from the crest. Bypassing this bump, I foolishly stayed near the crest of the ridge, thinking the whole time that I should be down on the sandy plain to the south. The plain gives out a few hundred yards short of the summit, and the ridge becomes fun, exposed third class. I tagged the summit, then found a sheltered spot from which to admire Basin’s higher main summit to the east, Humphreys to the south, and Mount Tom and the cliffs of upper Horton Lakes Basin to the north. “Home” looked far away. 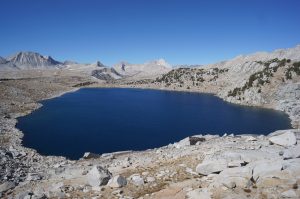 I was smarter on the way back, scampering back across the exposed ridge, then angling down to the sand and cutting across the north side of the connecting point. I took a more-or-less straight line to the first saddle west of Four Gables Southwest, which I figured was some sort of pass. The north side was fairly steep and held snow in places, but I found a couple of cairns, and it went quickly carrying only a small daypack. I passed decent-sized Rust Lake, then descended another steep step to skirt huge Steelhead Lake to the left. 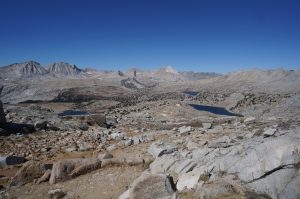 The long, descending traverse across the head of French Canyon to the Pine Creek trail would have been a miserable bog earlier in the season, but was pleasantly dry and easy so late in the season. I bumped into the trail at a switchback, and hiked to the pass as quickly as my tired legs would allow. The packers have done their best to ruin the north side of the pass with giant awkward steps, but it is still quite runnable, and I managed a respectable jog.

Between the two lakes, I met a ranger with a shovel and a huge pack. I had been talking to myself on the descent, so talking to another human was a nice change. She was out for five days, doing minor trailwork and “checking permits,” though I would be surprised if she met anyone. While there were perhaps a dozen cars at the trailhead, I had seen no one more than a mile from the trailhead in the last three days. I thanked her for her work, then continued hiking and jogging around the lower lake.

I met two dayhikers out for an afternoon jaunt just above the final descent, then tried to stave off boredom on the many switchbacks down to the Tungstar Mine. The upper trail/road was rocky and miserable, but the lower part was smoother dirt that I enjoyed despite my tired legs. I finally emerged at the pack station to be briefly menaced by someone’s dog (“oh, he’s just acting tough”), then walked to the car to rinse off before driving down through Rovanna to cell service. After two days of self-determination, I needed to coordinate with the humans.

Tom and Basin from Basin SW

Humphreys from the north

North side of col