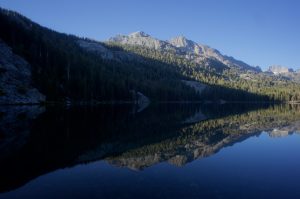 With summer temperatures in the Owens Valley, I escaped up the hill to the Mammoth area for comfortable sleep, and was looking for something interesting and not too difficult. Volcanic Ridge was one of the few moderate peaks in the vicinity of the Ritter Range I had yet to do. It had been on the Sierra Challenge in 2010, when I instead did Ritter, Banner, and Clyde Minaret, so all I had to do was follow Bob’s excellent trip report. However, where he crossed the peak to tag Red Top Mountain on the way to Red’s Meadow, I decided instead to traverse to the eastern end of the ridge. This offered patches of interesting class 3-4 climbing, as well as the usual Minarets-area variable rock and surprise cliffs. The outing was around 7 hours car-to-car, moving at a reasonably strenuous out-of-shape pace. 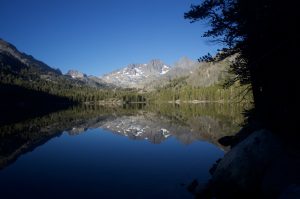 As usual, I slept near Minaret Vista, then drove down through the gate before it was manned. Agnew Meadows was as cold as ever, with frost on the grass, so I sat in my car eating a hot breakfast, and got started around 7:00. Surprisingly for so late in the season, the parking lot was almost full, and there were another couple of parties starting out around the same time. I passed them, walking the manure-filled sand-trench to the Shadow Lake trail at a steady pace, wearing overshirt, windbreaker, hat, and gloves.

I reached the sun a half-dozen switchbacks up the other side of the river, and immediately stripped to a t-shirt upon reaching the sun. I continued past the two JMT junctions, then looked for a likely place to leave the trail and head toward Cabin Lake. While it doesn’t look it on the topo, the terrain in the woods is actually fairly complex, with little hidden cliffs everywhere. I eventually found a wide but high-consequence log bridging a raging cascade in Shadow Creek, and balance-beamed over to the south side. 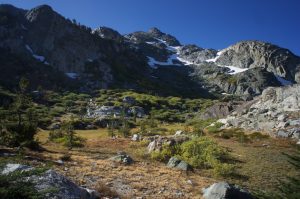 Once there, I climbed cross-country toward the lake, finding some steep sections similar to those I saw in Bob’s photos. I also found bits of use or game trail here and there, but nothing that lasted more than a hundred yards or so. Reaching the lake, I refilled my water at the outlet, then continued around right side, staying right to avoid the upstream bog. Here I found some cairns, and even what looked like an improved trail, but I have no idea why it was there, or how it connected to the rest of the trail system. 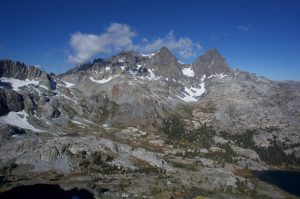 I eventually left the trail, heading up a talus gully toward Volcanic Ridge’s higher, western summit. With the big snow year, there were large patches of consolidated snow hanging around, rock-hard in the shade and treacherous even in the sun. To avoid them, I gained the ridge to the right, and gained elevation on enjoyable class 2-3 terrain. I had to cross short patches of snow in a couple of gullies cutting the ridge, chipping steps with a rock to get across one. 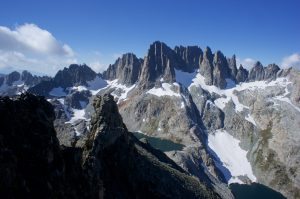 Emerging on the broad summit plateau, I made my way up semi-stable talus to the top, where I found only an old rusty can that once held a register. The views of the Minarets were every bit as spectacular as promised, as were those of Ritter and Banner farther away to the northwest. The wind was picking up, pushing clouds through the gap in the Sierra that gives Mammoth Mountain its impressive snowpack. I admired the view for a few minutes, then huddled in the lee to eat and put on my overshirt, warm hat, and gloves. 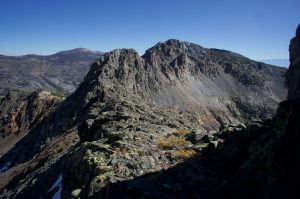 I saw a use trail Bob had probably used to drop back down to the trail system and tag Red Top on his way to Red’s Meadow, but the peak looked utterly uninspiring, and I wasn’t sure if the shuttle was still running. The ridge to the northeast looked complicated but doable, so I decided instead to traverse to the lower east summit, then drop back down to either Cabin Lake or the JMT. 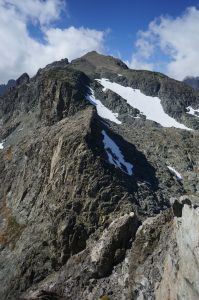 After the initial talus-hop and a bit of krummholtz maze, things got more interesting, with class 2-3 downclimbing to a narrow ridge, then a surprise vertical gash. I had to drop 30-40 feet to the left before I could traverse into it, then climb back out on fun class 3. I generally stayed on or near the crest of the ridge, hoping to find interesting climbing and/or old summit registers on Peaks 10,964′ and/or 11,207′. I found some of the former, as the ridge gets surprisingly narrow in places, but saw no cairns or other signs of human passage. 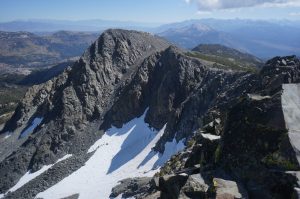 Finally reaching 11,207′, I was disappointed to find nothing, and also no easy way down to Cabin Lake. Rather than retreating over two obnoxious sub-summits, I decided to continue on to 11,165′, then drop down gentle-looking terrain to the JMT near Shadow Lake, where I could use its bridge to cross Shadow Creek. The going was mostly easy, and I was surprised to find an old register on the unnamed minor summit, with only two entries in the past 34 years.

On the descent, the map was once again not the terrain. What looked like a smooth slope had a cliff band up high, then more cliffs in the trees. I got through the upper one via a class 3 gully, then had to backtrack a couple of times in the woods before finding my way to the trail. Along the way, I slipped a couple of times on the pine needles, cursing my now treadless shoes. Finally back at the trail, I put on some angry music and jogged most of the flats and descents on the way back to the trailhead. I felt surprisingly good considering my recent inactivity; old habits die hard.

Subpeak along the way