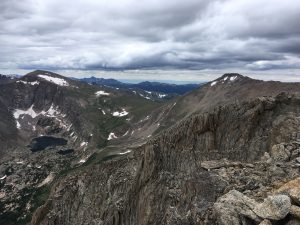 I was reintroduced to the United States in just about the worst possible way, with a 24-hour layover in Fort Lauderdale for a flight that was delayed by two hours. Rather than sleeping in the airport, I paid $80 for a room at a hotel with an airport shuttle. However, the room wasn’t ready until almost two hours after I checked in, and the shuttle didn’t run early enough to get me to the airport for my flight. So I paid about $7 per hour to use the room — about what I would pay for an entire night in Huaraz — then another $2 to ride the city bus back to the airport. Welcome home! 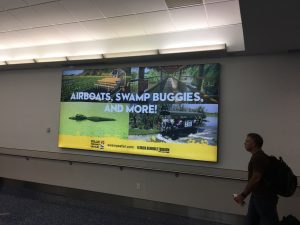 Fortunately my car was still at Ted’s house, so I spent a night there, then he joined me for some peak-bagging near Estes Park. I had done the southern half of the Mummy Range before Peru via Ypsilon’s Blitzen Ridge, so it seemed appropriate to finish off the range on my return. All of the northern peaks are walk-ups, but they turn out to be a long walk from the Lawn Lake trailhead, so it was a full day. 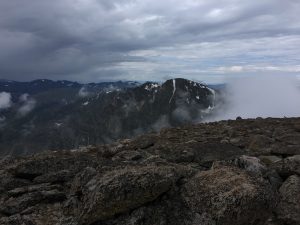 We arrived at the trailhead a bit after 6:00, to find a few others already packing up. It had rained on the drive up, and the weather remained unpromising as we started. The Lawn Lake trail was frustrating after the summer’s direct Peruvian trails, with the pointless near-horizontal switchbacks common to American stock trails. It started raining as we reached the open area below Lawn Lake, but there was no lightning and I had my Peruvian trash bag, so I didn’t mind too much. 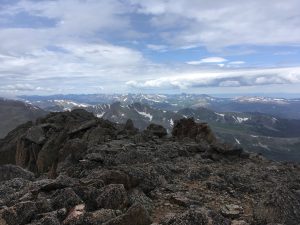 The rain soaked the willows above the lake, which in turn gave me a brief leg-washing. Ted had injured his foot a few weeks before, and was feeling slow, so I took off by myself to tag Fairchild while he headed straight for Hagues, the range highpoint. I made quick work of the talus-hop with my Andean fitness, then jogged the descent and caught Ted a bit below Hagues’ summit. I gather the standard route is class 2 from the other side, but I found some class 4 shenanigans along the ridge that made it the day’s best peak. The summit was somewhat spoiled by a radio repeater, but the weather had cleared enough for good views of the Never Summer range to the west, the lowlands of southern Wyoming to the north, and an unnamed and mostly-frozen lake between Hagues and Rowe Peaks, below what used to be the Rowe Glacier.

The descent to the saddle with Mummy was a somewhat tedious talus-hop, but the terrain improved from there, with an easy climb to the summit and a grassy stroll down its southeast side to the Black Canyon trail. It took a bit of woods-thrashing to find it, then an endless trail-hike to return to the car. After a well-earned burger in Estes Park, Ted headed back home and I drove off to find a place to sleep before the long drive west.

Longs in the distance