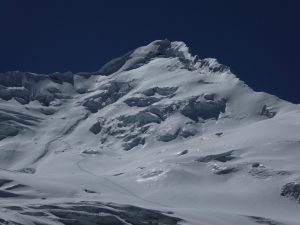 At under 5500m, Yanapaccha is insignificant compared to its 6000m or higher neighbors. However, its west face is a moderate technical climb recommended by the German climbers I had met at the hostel, and it is in the same valley as Chopicalqui, so it made sense to do it in the same trip. With a taxi, the approach is an easy hike along a winding trail from the highest switchback on Llanganuco Pass. Without one, I added a 1500-foot, four-mile road hike from the Chopicalqui trailhead. 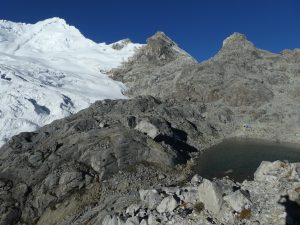 Reaching the base camp near a small lake, I was disappointed to find not just several large guided groups, but also two cows, busily polluting the camp sites and water source. I had just enough time before the sun went down to set up my tent and talk briefly to an American and Belgian pair of guided climbers who had returned from the summit that day. They said it had taken them four hours, from 4:00 to 8:00 AM, and had been unpleasantly cold the whole way. With this information and the fact that it is only 600m from camp to summit, I estimated that the climb would take me at most two hours, and decided to start at 6:00. I suppose I could have started later, but I also needed to hike and get rides all the way back to Huaraz later in the day. 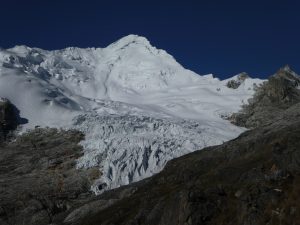 After a short hike through the moraine, I reached the right side of the glacier, geared up, and climbed an awkward pitch of gritty ice to reach the snowy surface. Several tracks from the edge converged to a well-traveled boot-pack, which I followed past a couple of crevasses on the tame lower glacier. I could see the bootpack heading up to a bergschrund then left to Yanapaccha’s north ridge, and a party of two making its way more directly up the face toward the summit.

The second of the party I saw was about halfway to his belayer when I reached the point where they had left the standard route. The snow was in good condition, and their way looked more interesting, so I took out my second tool and followed. The first part was easy going, and I could crawl up gripping each tool near the head. Where the route traversed left below the summit cornice, an old avalanche had scoured away the softer snow, leaving the harder underlying snow/ice. Here I felt more comfortable swinging my tools, as usual swinging and gripping too hard at first. 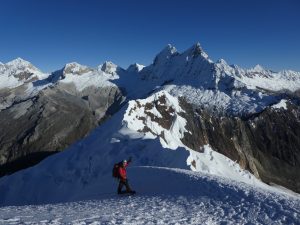 I caught up to the pair just as the leader was taking off to the right on the second pitch. Rather than following him and dealing with his rope and the snow he knocked down, I headed to his left, aiming for a small ledge under the cornice. The surface was messier here, with good solid ice in places, and rotten snow in others, forcing me to dig or kick multiple times to feel secure. The snow right under the cornice was worse, forcing me to rely more on my feet than my dubious tool placements. However this section was short, and I soon found a place to rest crouched under the cornice. From there, I traversed right and finished on the ridge just below the summit. 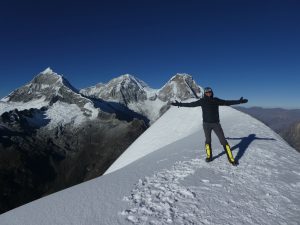 Waving to the guide, I hiked to the top, layered up, and enjoyed my first sun of the day. It was far less windy than the day before, so I had plenty of time to eat, enjoy the familiar views, and watch the other two top out. The guide introduced himself as Miguel, and I talked to him and his Japanese client a bit and traded picture duty before heading down the ridge to the standard route. I found one steep pitch that I downclimbed facing in, but the rest could be side- or plunge-stepped using the existing staircase. I was glad I had chosen the harder variation, as climbing it would have been routine. 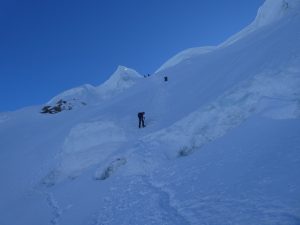 I met the American and Belgian at the base of the glacier, doing some practice ice climbing before hiking out to the road, and spoke a bit before returning to camp to filter more cold water (ugh, hands…) and pack up. I ended up hanging out with the ice climbing pair for a bit, then having some coffee with Miguel and his client, before finally being sent off with a cheese sandwich from their cook. Climbing popular peaks does have its advantages. 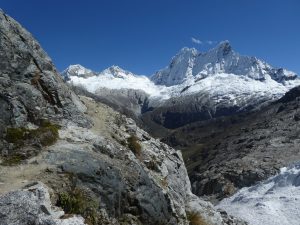 The other guide had mentioned the possibility of a ride, but when I reached the road, I found that there was only room for the four of them (two clients, one guide, and one porter) plus gear in the beaten-up taxi. Fortunately, I only had to wait about fifteen minutes before another taxi came down the pass, returning from dropping some people off for the Santa Cruz trek. I stupidly got in without asking how much it would cost, and worried about getting quoted a tourist price of 100 Soles or more. The driver was friendly, talking about the mountains and pointing out the Sierra Andina taproom, home of Ancash’s only craft beer. Prepared to overpay, I didn’t understand at first when he only charged me 10 Soles ($3) for the hour-long ride down a horrible road. I happily squeezed into a collectivo and tried to nap on the slow ride back to Huaraz.

I could have pet them