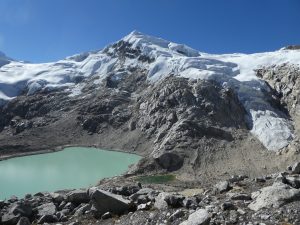 Ishinca is a relatively short and easy peak, dwarfed by its much taller and more challenging neighbor Ranrapalca. I had initially planned to climb it before Tocllaraju, but combining it with the hike out would save me a day. I therefore started out at 5:00 again, taking the well-used trail toward the hut near Laguna Ishinca, a large morainal lake with a concrete overflow chute. As I made the dawn climb, I met a couple of porters cutting the switchbacks at a near-run on their way down, one carrying a large blue plastic cooler strapped to his back. 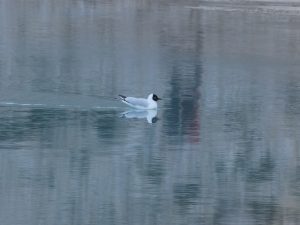 As recommended by a guide the previous day, I took the “isquierda” (left or northwest ridge) route, which was supposed to have less morainal debris and be slightly more challenging. As I crossed some streamlets toward the main path, I watched another group getting a sensibly but unusually late start, and a black-faced gull-like bird swimming around the lake. I slowly passed the others on the climb to the glacier, then left them at the crampon transition, as they also had to switch to the boots they were carrying. 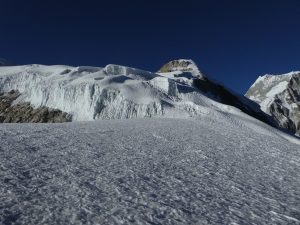 The route started out on crunchy bare ice, then made a long sidehill toward the broad shoulder around 5200m north of Ishinca’s summit. There were a couple of crevasses, but it was mostly straightforward, even if a slip would lead to an unpleasant slide. Things were a bit more complicated above the shoulder, with a crevasse maze between me and the upper slopes. I stopped in the sun to have a snack, look for the path, and admire Palcaraju’s intimidating south face behind me. 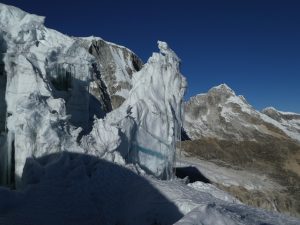 The snow was more suncupped than elsewhere, hiding the first part of the bootpack, but I took what seemed like the most reasonable line more or less directly toward the summit, and soon found tracks weaving through the obstacles. I passed a couple of crevasses and a cool ice pinnacle, and soon found myself on the open slopes leading to the summit. After struggling above 5000m on previous climbs, I was finally feeling fast-ish until the final steeper section, reaching the summit about three hours from base camp. 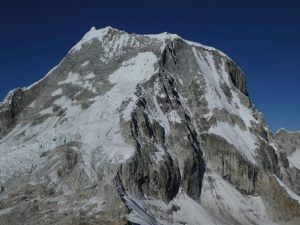 Ishinca itself is not particularly impressive, but its summit has wonderful views of its more striking neighbors. I spent about twenty minutes absorbing them on a sunny, windless day, sitting on my crampon bag and eating a sandwich as the other climbers made their way through the crevasses below. I finally turned to descend, climbing through a break in the summit cornice and down a short steep pitch to the broad southwest glacier. From there it was an easy walk to the glacier’s toe. Along the way I took some beta photos of Ranrapalca for the Patagonians, who were planning to climb its north face and descend its northeast ridge. The face looked better than it had from Tocllaraju, with only a small rock-band and a fairly gentle snow-cap at the top. The ridge, however, looked like a bit of a nightmare, a mixture of snow, bare ice, and rotten rock that would be a pain to downclimb or rappel. 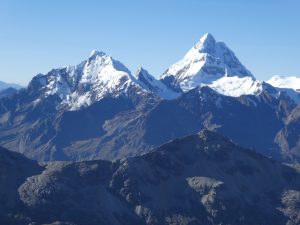 The glacier’s retreat has left the usual disaster of loose blocks, sand, and buried ice, but there was fortunately a decent climbers’ trail on the west side above Laguna Ishinca. I followed it quickly to the junction, coming in the derecha (right) side, glad to have done the loop in this direction, and took some of the porter shortcuts on my way back to camp. 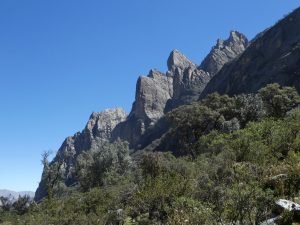 The Patagonians were preparing for their more serious climb, and gladly looked through my photos as I ate my last ramen and tuna. A cow had eaten about a quarter of their food overnight, so I gave them what little I had left, then packed up for the easy walk down-valley to where I hoped to find a taxi. The guard weirdly checked my pass on the way out (as if I had snuck in from a neighboring valley?), and I had to stand aside for numerous burro trains, but the hike went quickly.

I reached the worryingly-empty taxi lot by early afternoon, but fortunately had to wait only about ten minutes before one of the ubiquitous run-down Toyota station wagons showed up. The driver was waiting for another hiker, but agreed to take me down alone after only about ten minutes. As usual, the car filled with locals on the way down, most of whom did not have to pay. This driver was a kid who was less friendly than the older man who had taken me up, somehow managing to talk constantly on his cell phone and drink a soda while driving stick down a rough 1.5-lane dirt road and managing oncoming traffic. He also charged me ten Soles versus five for the ride up, despite using much less gas and taking other passengers. I protested a bit, then just shrugged and paid the $3, happy to be getting back to Huaraz in time to relax and find a decent dinner.

Distant peaks to the south