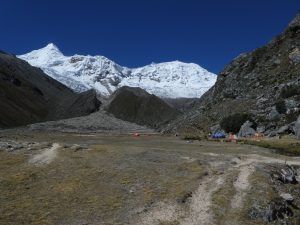 I had waited out some bad weather with dayhikes and trail runs, and was impatient to get into the mountains. My first planned objective was the popular Ishinca Valley, where I could efficiently tag three summits from a single base camp. The easiest of these was Urus Este, a popular acclimatization peak of around 5400m with almost no glacier travel. It was not a particularly interesting climb, and I had already been higher on several occasions, so climbing it was probably unnecessary, but since I was already in the area, I figured “why not?” 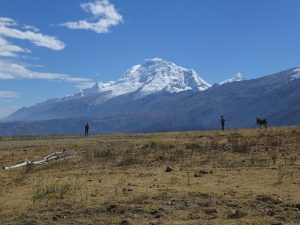 Getting to the valley was easy: a 2.50 Sol bus took me to the bridge in Paltay, where taxi drivers were waiting to take me up to Pashpa, one of the trailheads for the Ishinca Refuge (the other is Collon). I was surprised that the ride up the rough dirt road cost only 5 Sol, probably less than the cost of gas, and that there had been a running race there the day before. The driver let me out, pointed me in the obvious direction, then waited for a return fare. 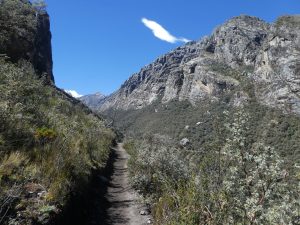 The approach from Paltay seems preferable to that from Collon, because it follows the shadier north side of the valley. Both trails see much traffic from the mules supplying both the refugio and many of the campers visiting the Ishinca valley, and are therefore beaten into the dusty manure trenches familiar to anyone who has hiked in the Sierra Nevada. However, once the trail passes into the craggy valley, it enters an unusually mossy and dense forest, making the middle part of the walk pleasant. The last part is high enough to be cool in the afternoon, and the views of Tocllaraju and Palcaraju are a welcome distraction. 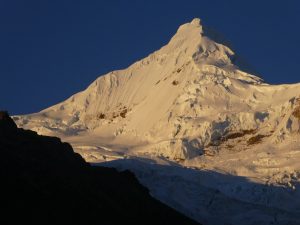 I found a camp spot without too much manure on the sunny south side of the valley, briefly checked out the refugio (45 Sol for a bed, more with food), then prepared my pack for the next day, ate my nutritionally adequate ramen plus canned tuna in oil, and settled in for the extra-long night. Not only are nights a full twelve hours here near the equator, but the sun sets at the head of the sharp west-facing valley around 4:30, and doesn’t rise until almost 8:00. 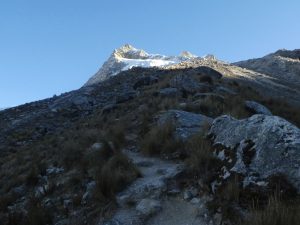 Sleeping off and on, I saw some headlamps making their way up the Urus trail around 3:00 AM, which seemed absurd for a south-facing approach to an easy peak, then tried to sleep until a bit after 6:00, finally starting up around 6:45. The trail heads nearly straight up the hillside from near the refugio, eventually following the lateral moraine of the shrunken Urus Este glacier. Above that, one can either continue straight and cross the remaining glacier, or bear right and avoid all but a short snowfield. 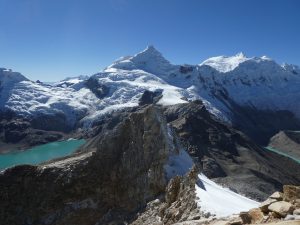 I went right on the way up, finally using the crampons and axe I had brought for the short snow pitch before stashing them at the base of the summit rocks. It looked like I could have stayed on rock all the way by following the ridge between the two routes, but I wanted to make use of the gear I had brought. I was feeling slow from the altitude, but with some panting and a bit of third class, I soon reached the summit. 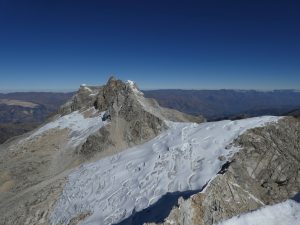 I had hoped to continue on to the other, higher Urus peaks, but a quick glance at the terrain showed me that this would not be happening. The central and western peaks are separated from the popular east by a sharp, rotten-looking ridge and some remnants of glacier, and the central peak looks difficult from all directions. I settled for doing the usual tourist thing, eating an avocado, cheese, and chorizo sandwich while taking in the views of Tocllaraju, Ranrapalca, and the puny-looking Ishinca before heading down.

I took the glacier route on the descent, front-pointing down a steep ramp before side-stepping down to the bottom of the ice. I waved to an Italian couple as I took off my crampons, then clomped down the trail as quickly as possible, mentioning the right-hand route to a French party who had been turned back by the glacier the day before. I was back at camp before noon, with plenty of time to dry out my gear, have lunch, read, and talk to an American couple backpacking a loop up the Ishinca valley and down the much-less-frequented Akilpa. The sun set all too soon, and I quickly packed for the next day, ate more ramen and tuna, and crawled into my bag for eleven hours of trying to sleep.

Tocllaraju from just below base camp

Palcaraju and moraines above base camp