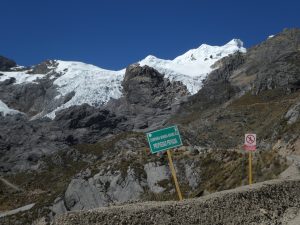 My “guidebook,” a John Ricker article in the 1996 American Alpine Journal, suggested that most of the central Cordillera Raura peaks were best approached from near the high Mina Raura, so I made a long road-hike down from Surasaca, around Yarupá, and up to the pass near Nevado Santa Rosa, stopping near dark at what turned out to be a singularly unpleasant camp site. Not only was it shaded well into the morning, but a thick frost collected on the exposed surfaces of my bivy sack, pack, and shoes. 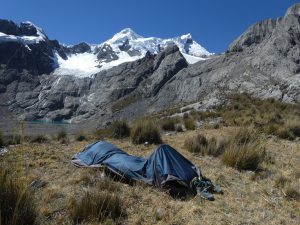 I had a few handfuls of peanuts for breakfast, then painfully put on all my clothes and started up the road around 7:30, stomping my boots to warm my feet, hoping to find my way to Nevado Santa Rosa’s northwest ridge. For my first attempt, I started down a side-road just past the guard-post at the pass. One of the guards, who were not interested in inspecting the passing cars and trucks, waved me over and took me to speak with his boss. The jefe told me that my chosen road was closed due to falling rocks, and that I should continue over the pass to some lakes. This would make my late start even later, but I still had plenty of daylight. 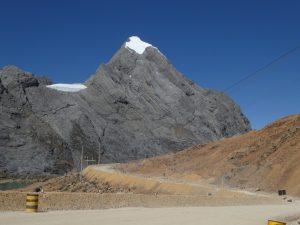 So I continued down the other side of the pass, stepping to the side of the dusty dirt road from time to time to let the semis pass. I neared a lake after a couple of switchbacks, and saw a side road heading toward Nevado Santa Rosa. Before I even made a move toward the road, a mine guard in a Hilux stopped to ask where I was headed. I told him that I was trying to climb Santa Rosa, and he said that all the surrounding land was privado and cerrado. He seemed surprised that people as far away as the United States had even heard of their Nevado and, apparently sympathetic to my situation, made a call to his boss. 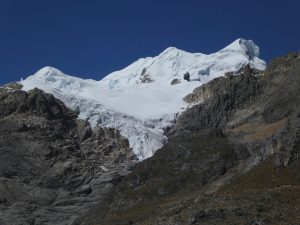 The call went on for awhile, with the guard repeatedly put on hold, so we had some time to attempt conversation. I explained how to use an ice tool, and showed him my crampons, which he had apparently never seen. I asked how long he had been working at the mine (three years) and if he had ever thought of climbing some of the surrounding peaks. He replied that he was busy working and, when I asked him about his time off, asked me rhetorically how much my gear had cost. He had a point, and could only shrug and grimace. He asked what my family was doing while I was wandering around Peru, and I replied no familia, no casa, nada. Had I been thinking quickly and better at Spanish, I would have gone on to say that he could buy decent used boots, crampons, and tools for under 1500 Sols ($500). That is a lot of money in Peru, but probably on the order of a month’s rent or a few months of a child’s school fees.

The mine seems to be the cornerstone of the local economy, while the locals have no time or use for the mountains, so I imagine the Mina Raura will outlive Santa Rosa’s glaciers. Someone may even have achieved the peak’s last ascent, since the underlying rock is mostly steep choss. The former standard routes on Torre de Cristal and the Siete Caballeros already looked much more precarious than when they were covered with snow. 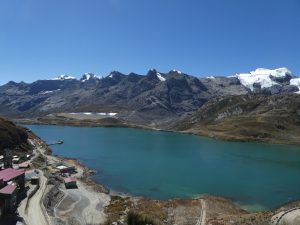 Evidently I needed to speak to some higher-up to possibly get permission to cross private property, so I got a ride down the wrong side of the pass, then waited an hour or so outside the gate to be called in. While I sat, I took some pictures of Nevado Santa Rosa and the Siete Caballeros for posterity. I also noted with amusement that the corporate safety sign (“1. No drinking on the job; 2. Follow the 10 safety principles; …”) had been recently repainted to add “5. Only use your cell phone when appropriate.” I have been amazed by how many people, even in the poorest and most rural areas, are constantly staring at their phones, frequently checking Facebook (which doesn’t count toward their data caps). It seems our digital pollution has spread to even the most remote and isolated corners of the globe. 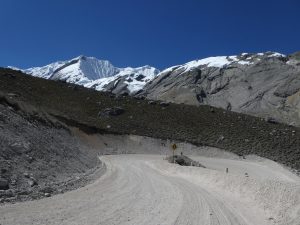 I eventually gave up, hiking back to my camp with the help of a short ride from a friendly worker. I packed up and began the long march back to Oyón, less disappointed than ready to move on. The worker who gave me a ride passed again, this time escorting an oversized truck, and gave me an apple for the road. It wasn’t the first time random locals had been generous — a woman with more dental work than teeth had given me a double handful of animal crackers on my hike up the night before.

Several people at the mine had mentioned cyclists, so while I didn’t understand all that they said, I wasn’t surprised to be caught by bike tourists on the descent, the first non-locals I had seen since leaving Lima. They turned out to be a bad-ass French couple towing their young daughter in a trailer. We talked for a few minutes before a collectivo stopped to ask if we wanted a ride. They were of course fine coasting into town, but I was happy to pay the 10 Sols to save my soles. I was back in Oyón by mid-afternoon, reunited with my bag and figuring out the public transit marathon necessary to reach Huaraz.

One response to “Mina Raura, glaciers, and rock”