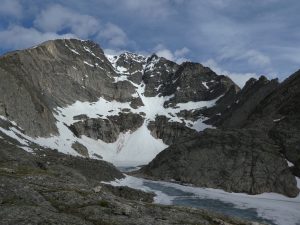 Ypsilon Mountain is one of the better peaks in the Mummy Range in northern Rocky Mountain National Park. While its west slope is unremarkable tundra, its steep, complex southeast face rises 2000 feet from Spectacle Lakes, containing several interesting routes. Blitzen Ridge is one of about ten routes that have been on my list of to-do potential classics for years, and I was pleased to finally check it out in manageable early-season conditions. 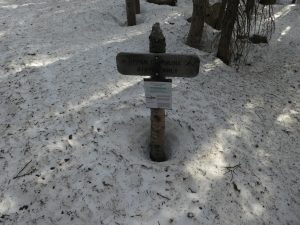 After sharing my normally-peaceful camping spot near Estes Park with some people who rolled in late and noisy, I woke early and was headed up the trail to Ypsilon Lake by 6:00. A guy who looked like a climber had started a few minutes before me, and despite his wearing clunky mountain boots, we leapfrogged for most of the approach to Spectacle Lakes. The trail started out clear and dry, then became a small stream, with the snow going from patchy around 10,200′ to near-continuous by 10,800′. 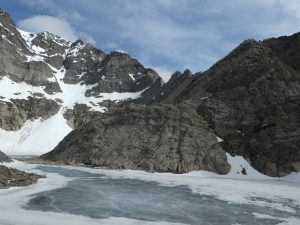 It had been warm overnight, and the snow had formed the usual, wretched Colorado spring slush-bog in the trees. I cursed and floundered along an old set of boot-prints to just above Ypsilon Lake, then found relief on some bare, south-facing slabs on the way to Spectacle Lakes. I skipped the lower, easy part of Blitzen Ridge, crossing between the two lakes and climbing a spur ridge and gully to reach the main ridge just below the four crux towers (the “Aces”). 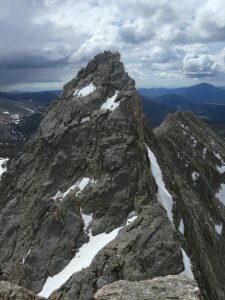 I skimmed the route description on my phone, but mostly just figured out something reasonable to get over the towers, summiting them all but not trying to stay directly on the ridge crest. On the first and second, I followed some grassy ledges on the left side, zig-zagging back and up to gain elevation from time to time. The third felt like the crux to me, with some exposed climbing on golden rock to the right. The route-finding was tricky in places, and I did a bit of backtracking before finding something that felt comfortable.

The route description mentioned a rappel off the fourth tower, but that was clearly a mistake, since descending its uphill side was trivial. The other towers were a bit trickier to downclimb, either staying right on the crest, or traversing sometimes-slabby terrain to the right. I would say the third tower was the crux for me, but the difficulty is very dependent upon route-finding choices. 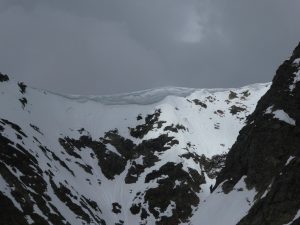 The ridge above the towers is no harder than class 4, but remains fun and narrow. The angle of the rock layers rewards staying on or just left of the crest, with inspiring views of Ypsilon’s southeast bowl, with the “Y” couloir and (at least right now) massive cornices overhanging the summit ridge. I had to cross snow in a few places, but the south edge of the ridge crest had mostly melted out, making for almost summer-like conditions despite the lingering snow everywhere else. 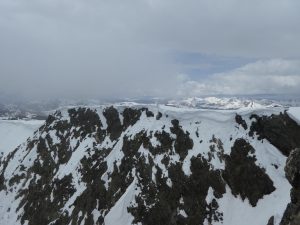 I topped out in a mild flurry of corn snow, looked at the rain- and snow-storms to the east and south, and took off south across the tundra toward Chiquita and Chapin at a purposeful walk. The route description recommended descending the bowl between Ypsilon and Chiquita, but that looked unappealing, and would dump me back in the hellish snow near Ypsilon Lake. Instead, I continued to Chiquita, briefly contemplated descending its broad east ridge, then decided to continue to Chapin and take the hopefully-clear Falls Creek Road back to my car.

This plan mostly worked well. The traverse to Chapin was snow-free, and I also managed to avoid snow most of the way back to Chapin Pass and the road. Unfortunately my luck ran out perhaps a half-mile from the road, and I had some awful encounters with thigh-deep slush, sometimes with flowing water beneath it. I wrung my socks and shoes out once after a particularly nasty bog encounter, then again after stumbling out onto the plowed and mostly dry road. From there, it was a long but not unpleasant hike jog back down to the pavement, then an uneventful road-walk to the car.

Other climber downclimbing a tower

Boy did this suck