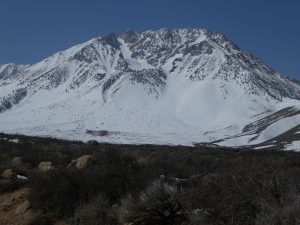 Sitting at the eastern edge of the range, Basin Mountain and Mount Tom are the two most striking peaks seen from Bishop. Mount Tom has several long ski lines, of which I have done a couple, and I planned to do another, the southeast couloir. However, that line shares a trailhead with Basin’s well-known and much more striking east bowl. Partly because it was tempting and closer, and partly because I hiked over a mile from the car before realizing I had forgotten my poles, I scrapped my plans and headed for Basin. 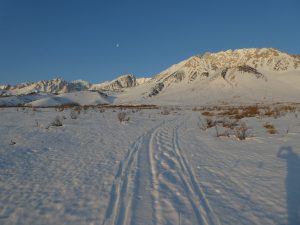 I skinned up the road for awhile, then left it to continue through the sagebrush toward an orange thing near a large boulder that turned out to be someone’s tent. Despite its being sunny and pleasant, I saw no one outside the tent or skinning up the slope above. The previous day’s snow up high may have fallen as rain below, because the snow still had a slick, rock-hard crust. I carefully skinned up for a bit, wishing I had ski crampons, booted until I began postholing, then cautiously and strenuously followed the old skin track for awhile. 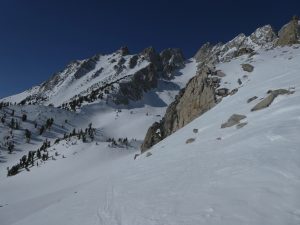 I eventually reached a shoulder between the lower slopes and the basin that gives the peak its name. Some previous skiers had skied a shorter line north of the shoulder, but the snow still needed time to soften, and I was here for the basin, so I side-slipped over to the south, then continued along the now-fainter track. The previous morning had been snowy, and the afternoon violently windy, so there was a mixture of powder and wind-board in the sheltered northeast-facing bowl. 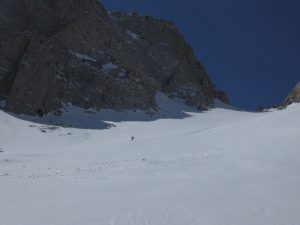 The enormous scale of the terrain hides the fact that the upper bowl is 2000 feet high, so it seemed to take forever to cross the lower flat section and climb the headwall. I managed to skin partway up, but had to return to booting as the slope got steeper and more wind-packed. The bowl tops out at the base of a rock wall below the summit, so rather than follow it, I decided to explore a southeast-facing branch to see if I could reach the summit. 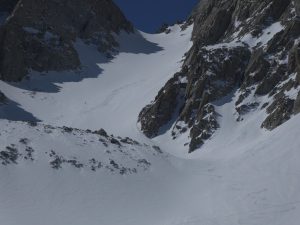 The snow abruptly turned nasty, with various soft stuff over an old rock-hard crust. I booted and wallowed up a ways, but after backsliding a couple of times, decided that continuing might be not just frustrating but unwise. I stomped out a platform, switched to downhill mode, and had a snack, then did a trial ski cut to see what would happen. Not too surprisingly, I managed to set off a small slide, though it wasn’t very deep. I found some more solid snow on the south-facing part of the chute, and carefully made my way down to the main basin.

I had seen someone following my track below, and met him again as he put his skis on his pack to boot up the final half of the upper basin. I stopped to chat for a minute, then did some thuggish skiing on variable snow back to the saddle. Below the saddle, the east-facing crust had softened nicely, and I managed to hit 30 MPH making super-G turns on the lower slope — not particularly fast, but still fun, and not bad for the conditions. I dodged sagebrush on the flats until I found the road, then coasted back to within 10 feet of my car around 12:30. There were another half-dozen vehicles parked by then, and I passed a few skiers, but only me and that one other guy seem to have made it up high.

Back down-slope to the valley