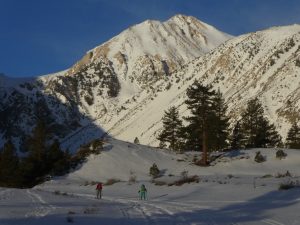 It’s spring in the Sierra, and some of the big east-side ski lines are coming into prime condition. Of the roughly 10,000 feet of elevation between the Owens Valley and the highest peaks, 5000 feet or more is skiable in many places, often with minimal desert hiking carrying skis. With clear skies and a higher sun, the snow refreezes overnight, and softens up enough on south- and east-facing slopes to be pleasantly skiable by noon or 1:00 PM.

Buck Mountain, and its neighbor Alice, are unattractive sand-piles east of the much more dramatic Palisades. I had climbed both for the Sierra Challenge, and not particularly enjoyed doing so. Both mountains are much improved by snow, however, with Buck’s southeast face and gully offering just over 4000 feet of moderate skiing. With the Glacier Lodge road currently closed about 1.5 miles short of the summer trailhead, there is a bit of an approach, but nothing obscene, and it was still mostly snow-covered from the small parking area. 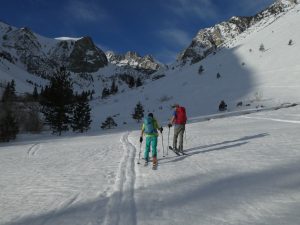 Dan and Kim had camped at the trailhead, so they probably got more sleep than I did, waking in the dark to drive down from north of Bishop. After the usually gear wrangling, we were skinning up the road on a chilly morning a bit before 7:00. This was my first time using Dan’s old boots and backup skis. The boots in particular are much lighter than my current gear, and while this made skinning easier, I was curious how they would perform going downhill. 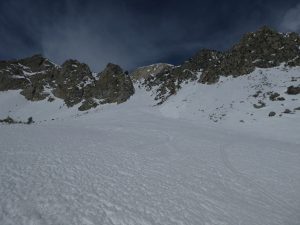 We eventually reached the summer trailhead, and had to remove our skis for one short stretch of south-facing trail passing the cabins. Beyond, we followed an old skin track up across the bridge, then into the open South Fork of Big Pine Creek. High clouds and a breeze kept temperatures cool, and we were concerned as we skinned west that the snow would not soften enough to be fun. 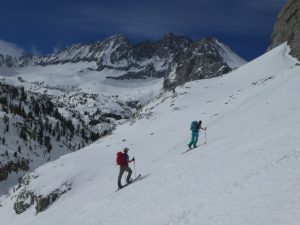 Just past the summer stream crossing, where the trail begins to climb the headwall toward Willow Lake, we finally saw the start of our route. After waiting awhile for it to warm up, and almost giving up, the clouds looked like they might be blowing over, and we fortunately decided to go ahead. The snow was still solid on the way up, and as the slope steepened, Dan and Kim put on their ski crampons. Not having such esoteric gear, I carefully skinned as best I could, then put my skis on my pack to boot up a couple of the steeper sections. 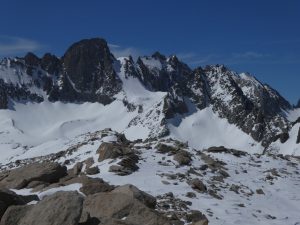 Sill and North Palisade from Buck

Above the initial chute, we found a good skin-track switchbacking up the open slope, which made it possible for me to carefully skin up to the shoulder, then around to the final south-facing slope. While Kim waited for Dan, I continued up the track toward the summit ridge. I stashed my skis in a sheltered spot, then followed a boot-track to the true summit, where I found the register in good shape and completely exposed. It was unfortunately too new to include the Sierra Challenge, but I saw some familiar names, and it was warm and calm enough to hang out on the summit, have a snack, and admire the Palisades in all their snow-bound glory. 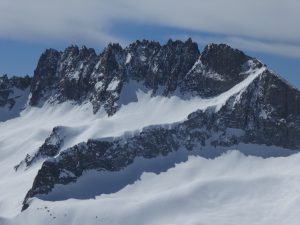 By the time I returned to my skis and figured out how to switch Dan’s boots to downhill mode, Kim and Dan had reached my sheltered spot. It was getting late — around 1:00 PM — so rather than continuing to the summit for a clear view of North Palisade, they briefly looked over into the North Fork, then prepared to descend. I was worried about some plastic poking me in Dan’s boots, but as is often the case with ski boots, once you start going downhill, either they sort themselves out or you stop noticing the pain.

Yours Truly stylin’ it (Dan’s photo)

After a couple turns of hard crust, the snow became pleasant on the upper face, and I descended in swooping GS turns. The snow below the shoulder was similarly pleasant, except for a shaded part of the lower gully that had already refrozen, and I got up some serious speed on the final runout into the South Fork. I wish I knew my top speed, but unfortunately I was not recording the ski.

Rather than following the summer trail, we stayed on the south side of the creek, following some ski tracks that eventually deposited us among the surprisingly large cluster of cabins. I debated putting skins back on for the slightly-downhill road back to the car, but eventually decided not to: the skins had left nasty glue on the bases on the way up, and it was downhill… So, much strenuous skating and double-poling later, I finally returned to the car, and was home again by late afternoon.

Sill and North Palisade from Buck

Split in the distance

Yours Truly stylin’ it (Dan’s photo)