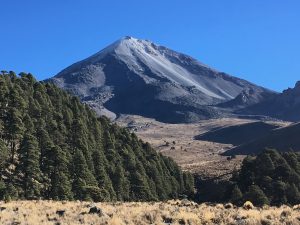 At 18,491′, Pico de Orizaba is Mexico’s highest volcano, and the third-highest peak in North America. Gringos seem drawn to its north side, where the standard route leads from a hut at the end of a 4WD road, to the small and shrinking Jamapa Glacier, and on to the summit. However, like many Mexicans, I prefer its south side, where there is no hut, no glacier, and no need for an expensive 4WD taxi. Having done this route in 2016, I was familiar with the best ascent and descent paths, and wanted to see how fast I could do it. I was done playing around; it was suffering time. 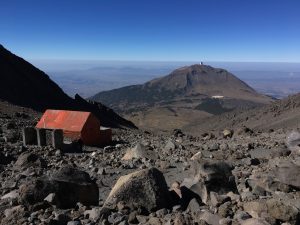 I woke to clear skies and calm winds, and waited around the trailhead until about 8:30 to give the air up high a chance to warm up. By the time I started, it was t-shirt weather at the parking area. I jogged some flatter stretches of the 4WD road toward the bright orange and disgusting hut, but mostly hiked, taking the use trail shortcutting the switchbacks where I could. I had a lot of climbing to do, and was still not acclimatized enough to do much uphill running at this altitude. 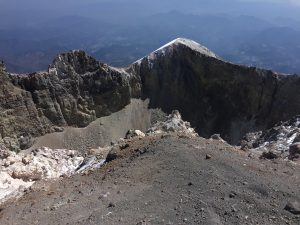 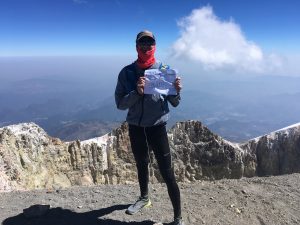 Since I was going for a round-trip time, I was still on the clock, but I hung out for a few minutes on the pleasantly non-windy summit to try to talk with a group of three, put on my windbreaker (I had been climbing in just an overshirt), and pose for a few photos for my friend’s son. Then I waved goodbye and bombed down the sand to the right of the ascent route. I nailed the descent, bombing down sand right of the rib, crossing, then continuing down more awesome sand and scree to just above the hut, losing over 3000 feet in under 30 minutes. 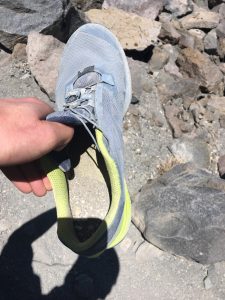 I stopped above the hut to empty a half-cup of sand from each shoe, then jogged/ran the route back to the trailhead. I passed some groups hiking up to the hut, and a couple of trucks bouncing down the road, then smiled as the guard raised the gate for me to run up the short hill to the sign. 3h18 round-trip was a good time for me, but I have no doubt that some fast Mexican like Santiago Carsolio could do it in under 3 hours, or perhaps already has. 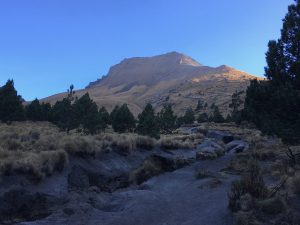 With lots of daylight left and nothing else to do, I drove over to La Malinche, a lower volcano between Orizaba and Iztaccíhuatl. Carsolio had put up an insane time on it that I knew I could not beat, but I thought I might as well at least watch the sunset from its summit. There were plenty of people picnicking at the trailhead, and crowds of Mexicans and even a few Americans descending, but I was the only person moving uphill so late in the day. I tried to keep up a decent pace, but I was tired from the morning’s effort, and did not feel like pushing myself too hard. 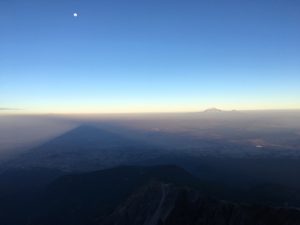 It was cold and windy on the north ridge and on the summit, so I did not loiter long, but I did pause to enjoy the volcano shadow stretching out east toward Orizaba. I tried beat the darkness on the way down, hurrying a bit more, but dusk does not last long so close to the equator. I finished at a pathetic pace, descending the rough trail through the woods using my cell phone as a flashlight. 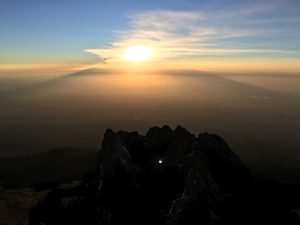 The quesadilla place looked like it was closed, but they reopened just for me, so I quickly enjoyed a chicken quesadilla as they washed the plastic lawn chairs, then drove down the road to a pullout to sleep. I was just washing my legs when a police caravan rolled slowly by, then stopped. Oh, shit, here we go… However, it turned out my dread was misplaced. An officer in a bullet-proof vest approached, but instead of giving me a hard time, he simply asked where I was from, then told me that it wasn’t safe to camp here, and that I should sleep back near the restaurant. It didn’t feel any sketchier than the places I had slept the last few nights, but I did as he said, and passed an uninterrupted night back at the trailhead. Mexico is awesome.

This entry was posted in FKT, Mexico. Bookmark the permalink.