While I have not been getting out as much as planned this winter, it has still been slightly more interesting than usual. Here are brief descriptions of a few backcountry ski outings. 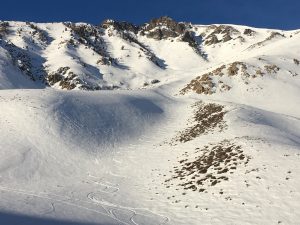 McGee Mountain, a peak west of the southern end of Crowley Lake, has numerous couloirs on its east and south faces. This one lies above the old rope tow for a ski area that predated Mammoth Mountain. The snow lower down was thin, but I was itching to get out, so I parked at the historic marker for the old lift, and started skinning up some defunct road toward the couloir’s base. While this was not the most direct route, it avoided the sagebrush that the thin snow failed to cover.

Beyond the end of the road, I continued switchbacking up the hill left of the couloir, occasionally crunching through brush. I eventually moved to the gully below where it narrows, removing my skis to kick steps and wallow through the choke-point. A bit above, I was able to put my skis back on and switchback to the top, eventually exiting via the melting-out right-hand side.

The northwest-facing plateau above was badly wind-scoured, and I carefully picked my way through rocks and grass on the long, gentle climb to McGee’s summit. I took some photos, sent some texts (once again, I had no signal at the trailhead, but a clear one at the summit), then transitioned to “fun mode” to carefully dodge obstacles on my way back to the couloir. Unfortunately I overshot the top, and had to shoulder my skis and hike back up the ridge before dropping in.

I had not been on skis in awhile, but I quickly remembered how to turn in the upper bowl, and was having fun by the time I reached the choke-point. I got in some decent turns below, then exited to the slope I had ascended. Things gradually got uglier lower down, as I was forced to dodge sagebrush and turn gently to avoid carving through the thinning snow. I finally returned to the car via a slow, thigh-burning snowplow down the road. 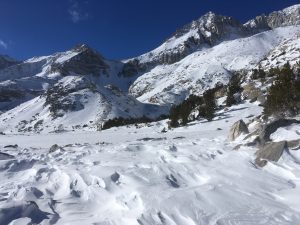 With the Upper Rock Creek Road gated at the winter closure, anything at the back of Little Lakes Valley is a long trek. The snowmobile-groomed road to Rock Creek Resort helps, but the distance still keeps most people away, leaving more snow for me. The high trailhead and packed snow also help in the dry early season, when other approaches would require hiking.

I got a semi-early start, skinning happily up the smooth road, then continuing along a single snowmobile track to the Mosquito Flat trailhead. I was happy to find a ski track beyond, probably left by whomever had driven the snowmobile. The lakes were still not quite trustworthy, so I followed the skin track that skirted them, more or less along the summer trail. Beyond Long Lake, I followed the drainage up toward Treasure Lakes, where there is a decent use trail in the summer.

The Hourglass Couloir was obvious between Mount Dade and Point 13,268′. I had descended it in dry conditions on a backpack several years ago, finding loose and wretched scree. This time I was doing things right: it was full of snow, and I had skis.

I skinned up as far as I could on the slope below, then began booting the steeper part. This was mostly okay, but the steeper part was a bit intimidating with neither crampons nor ice axe, and with ungainly skis on my back. I was able to get just enough purchase with a sharp ski-boot kick, but if I had stumbled or been blown over by the wind, I probably would have slid helplessly and slowly back down to the bottom.

Topping out at the saddle, I saw that the slope to Dade’s summit had been mostly scoured down to the talus, and decided this was far enough for the day. I dropped my pack, hiked around for a bit, then switched to “fun mode” for the descent. There had been no recent snow, so the couloir skied a bit like a groomed run, with just enough soft surface snow over the wind crust to make confident turns. Taking a bit of care to build momentum for the flats, I managed to glide all the way to the flatter wooded section just above Long Lake. From there, I skinned to just below the summer trailhead, then slid down the road to the car. The whole thing was 19 miles and about 6h45 — a good day. 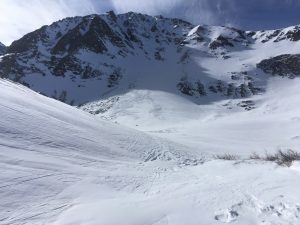 Esha Creek is a side-stream of McGee Creek that is ignored during the summer, but becomes a popular ski in the winter. It had been on my radar since a friend mentioned it, and I finally got around to skiing it before a major storm turned everything to avalanches. While the snow was a bit thin — it had been awhile since the last significant storm — there was enough coverage to make it a fun run from near 12,200′ down to McGee Creek at 7800′.

The road up McGee Creek had been packed by snowmobiles and partly wrecked by snowshoers and hikers, so it was easy going up toward the old northern lateral moraine. The road curves around its lower end, but I saw a skin track cutting the corner and decided to follow that. It turned out to be a bad idea, as the track trailed off on McGee’s melted-out south-facing slope above the corrals. I took off my skis, boot-skied down some scree, then carefully slid back down to the road with my heels free and skins on, dodging sagebrush.

Back on track, I regained the skin track I knew would be there. It led to a sketchy iced-over log crossing McGee Creek; fortunately ski boots are waterproof, so I could step in the creek without fear. Beyond, I followed the skin track up Esha Creek. It became too steep to follow in a couple of places — perhaps its creators had ski crampons — and I had to kick steps in the hard crust. There were a couple bands of bare talus in the bottom of the drainage, avoided to the west.

I passed the frozen lake just below 10,600′, then booted up toward the various couloirs on “Esha Peak’s” face. I would not have known which one was correct, but fortunately I could follow the boot-pack from two days earlier. Slowly, painfully, I dragged myself up the couloir, finally sketching my way up a steep headwall to the peak’s northeast ridge. I dropped my skis and pack, and hiked to the summit to take in views of Red Slate, Baldwin, White Fang, and McGee.

Returning to my skis, I carefully side-stepped down the headwall, then made a couple of cautious turns to check out the couloir. It proved less scary than expected, with enough soft snow to make for good skiing. I paused a couple of times to catch my breath, including once above the 25-foot constriction that I thought would be the crux, but which turned out not to be that bad. I had to build some momentum to cross the flat by the lake, so I went straight down the last couple hundred vertical feet. I reached barely-stable speeds across some old avalanche debris, but managed to carry enough momentum to carry me across the other side. The crust was still rock-hard, and my edges often chattered as I carved turns. It reminded me of my ski racing days as a kid, except for my being out of shape and having to pause and gasp from time to time. Still, I reached McGee Creek about 30 minutes from the summit. After crossing the creek, another 30-minute glide got me back to the car. 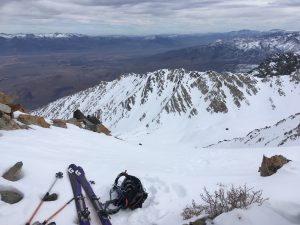 Elderberry Canyon is a classic Eastern Sierra ski descent. Starting from down in the desert where you have to park your car — probably around 5500′ — the wannabe skier follows an old road and trail to the Lambert Mine at almost 11,000′. From there, numerous couloirs ascend to Mount Tom’s north ridge between 11,800′ and 12,800′. Trying to sneak in a final ski ahead of a round of avalanches, I caught it in non-ideal conditions, with skiable snow starting at 7100′. Still, by climbing to the ridge at 12,000′, I managed to find 4900′ of enjoyable if crusty skiing.

For the first time since last summer, I started out with my skis and boots on my pack, hiking the old mine road, which no longer seems drivable past around 5800′. I reached Elderberry Canyon at 6400′, and briefly explored a road continuing south before returning to find the near-invisible trail up next to the creek. After a bit more confusing near a constriction, I crossed the creek where it turns south around 7000′, bashing through some willows and picking my way through nasty wild roses.

I finally put my skis on at 7100′, skinning carefully up hard crust and around bits of old avalanche debris. The valley narrows somewhat, then widens and flattens as it turns slightly east around 9600′. I continued over rolling terrain, eventually ending up west of where the Lambert Mine is shown on the map. The weather was still decent, with thin high clouds and little wind, so I chose a broad chute and booted west to Tom’s north ridge around 12,000′.

The summit was another 1600′ and 1 mile climb away over mostly-bare talus, so I spent a few minutes admiring Pine Creek and Bear Creek Spire, then locked in my heels and headed down. Above the mine, I found some powder mixed with breakable crust. The best skiing was from the mine down to 9600′, solid snow with a smooth, soft surface friendly to sweeping, carving turns. Things were crustier and a bit trickier below, but still fun and skiable back to 7100′. From there, it was a moderate hike to the car, shortcutting the road through sagebrush and sand. I was surprised to find another skier parked next to me, who got a later start and turned around lower. Satisfied, I drove home and waited for more snow to arrive.