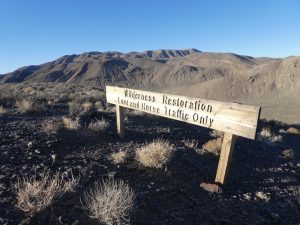 For an easy day after Telescope I had chosen Tucki Mountain, an unremarkable DPS peak south of Stovepipe Wells at the northern end of the Panamint Range. I got a lazy start, checking out a natural bridge and having a leisurely breakfast before heading for the trailhead. Thanks to my cursory research, it took awhile for me to finally realize that the GPS track and route description I had were for different routes. Once that dawned on me, it took only a short time to find the “road closed for restoration” sign along the Skidoo road, and I was on my way at the crack of noon. (Etymology note: The residents of Skidoo wanted to name the town “23 Skidoo,” but the Postal Service wouldn’t allow the number in the name. According to the Oxford American Dictionary, “The term is said to have been used originally in reference to male onlookers chased by police from the Flatiron Building, 23rd Street, New York, where the skirts of female passers-by were raised by winds intensified by the building’s design,” and is related to the more common slang for “get out of here,” “skedaddle.”) 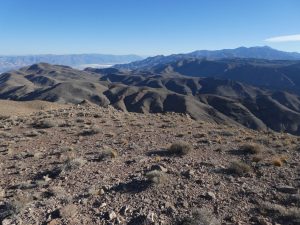 Anyways… Tucki is not much higher than the road, and only a few miles distant, but the terrain in between is rather frustrating. The spine of the Panamints is an indistinct, undulating ridge, with deep valleys descending to either side. Alternatively, it is a series of east-west ridges with saddles between them, and the best path follows these saddles. Either way you look at it, there is a lot of up-and-down through pathless desert terrain. 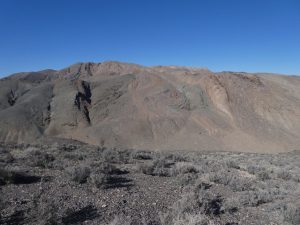 The initial drop is the most discouraging, descending nearly 1000 feet to a 4×4 road coming up from Emigrant Wash. I dropped into a ravine near the end of the closed road, and soon found the bits of old trail mentioned in Bob’s report. Once out in the broad valley, I found the terrain surprisingly runnable, and even fun, requiring constant attention not to trip on a cactus or bury a foot in the colonial burrows of some unknown desert creature. I continued straight across the road and up a reddish wash, finding a couple cairns along the way. 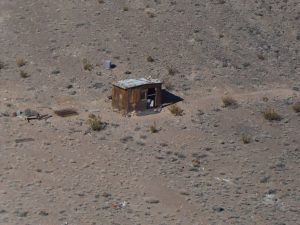 I scrambled a couple of short class 2-3 steps in the wash, then left it where it turned east to climb over the next ridge. I found yet another demotivating drop, this one somewhat steep and loose. There was an old cabin on the other side, but it was well west of the route I had downloaded, and I wanted to make it back before dark, so I didn’t make the 15-minute detour to check it out. Instead, I climbed another gully and slope, followed the meandering crest of the range, then made another drop. I found a completely unnecessary class 4 step getting out of this one, which was a nice change of pace. Beyond, it was more of the same rolling terrain, ending with several false summits. 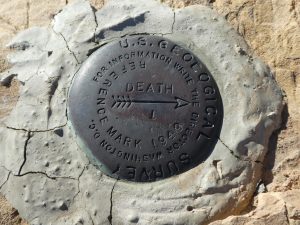 Tucki being neither easy nor notable, the register was almost entirely a collection of the usual suspects. I read through it while eating a bar, photographed the ominous “DEATH --->” marker, then began the long hike/jog back. Rather than going over the ridge into the red gully, I followed the road around to the east, which was longer but easier and more runnable, and probably took about the same time. I followed the wrong gully back up toward the road, but it didn’t make much difference, and I was happy to make it back to the car well before dark.

Langley through Whitney from Tucki