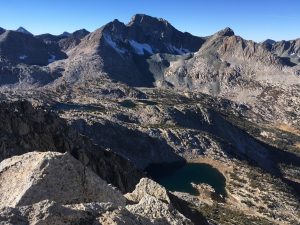 McGee and Peter from Hermit

Mine was the only car in the lot at North Lake, and the pack station and campground were both long closed. I woke to my alarm at 4:00 AM, and started the lonely walk up the road through the campground at 4:30. The route to Lamarck Col is much easier to follow now than when I first used it, with signs of recent trailwork, and I am much more familiar with the route, so I had no trouble making my way up to the upper sand-slope by headlamp. I can’t say that I enjoy this approach, but it is far from my least favorite on the east side. 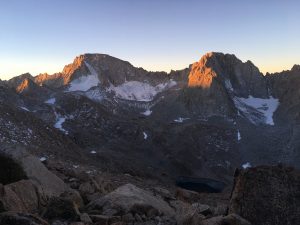 I reached the col about 2 hours from the car, a good time for me considering that I had walked the road to the trailhead, and admired the sunrise on Gould, Mendel, and Darwin for a minute before dropping down the mess of trails through the sand and boulders to Darwin Bench. It was cold and windy on the bench, and the windblown surf on one of the lakes had frozen on the sandy shore overnight. I wanted to get out of there, so I made pretty good time, reaching the JMT in 3 hours. 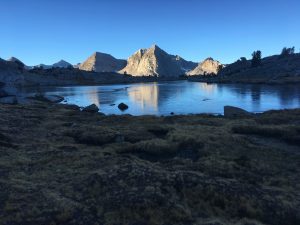 It was warmer down in Evolution Valley, where I took off my overshirt and switched to daytime mode. I hiked up the empty JMT to Evolution Lake, then hopped across its outlet on some rocks and began a traverse around the head of Evolution Valley toward the Hermit’s east face. The traverse started out with some slightly tricky slabs, then became an easy mix of slab and forest, with a couple of cairns possibly marking some sort of route. The terrain remained easy to the flat spot below the Hermit’s two summits around 11,400′. Above, I followed a diagonal gully to join the main garbage chute which drops from the saddle between the two summits. The climbing was mildly unpleasant, but there were enough solid rocks that I could mostly avoid thrashing up the loose stuff. 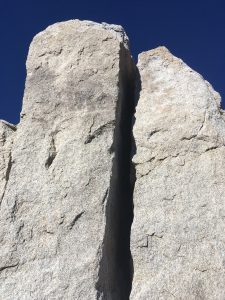 From the saddle, I had a good view of McGee Creek and Peter Peak, which I planned to visit later in the day. I made my way up some class 2-3 terrain on the sunny side of the ridge, and soon reached the Hermit’s famous summit block, one of the hardest on the SPS list. There are two ways to do it: a 20-30-foot offwidth/lieback on the east side, and a harder 10-foot face on the south. I had wanted to bring the short piece of rope I used on Thunderbolt to aid this block, but I couldn’t find it in my car the night before. Instead, I brought my rock shoes and hoped for a miracle of skill and confidence. 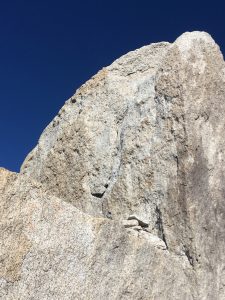 As Chernomyrdin said, “I was hoping for the best, but it turned out as it always does.” I started with the short south side, where previous climbers had built a pile of rocks to ease the start. I found a small left foot and a good left hand, and got a solid right foot, and was basically one move from topping out. However, I couldn’t find anything I liked above that: I needed something for my right hand, and the options seemed to be either grabbing one of the crumbly nubs, or palming the rounded right edge. After one half-hearted lunge where I popped off and stuck the landing, I decided that I had had enough. I liebacked up the east crack for a few moves, and it felt great, but I wasn’t confident that my strength would last to the top, and it would not be easy to shove myself into the offwidth and rest partway up. I clearly need to climb more. 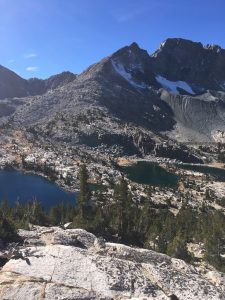 After wasting too much time getting shut down, I put my rock shoes back in my pack and returned to the saddle. I descended the loose chute on its west side for a bit, then traversed south to the lake at its base. Along the way, I somehow managed to dislodge a small rock which cut my finger on its way downhill. I got water and rinsed my finger at the lake, then climbed over the minor ridge to McGee Lakes, where the Park Service was killing non-native fish with a gill net. 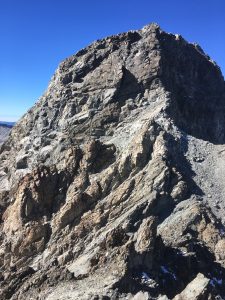 I started up the easy slabs of McGee’s northeast ridge, familiar from one of my one-handed backpacking trips. I was feeling a bit slow, but managed a respectable pace considering the mileage I have put on my body in the past two weeks. Where the northeast and southeast ridges meet, the rock changes to the loose volcanic crap found on neighboring Goddard. A bit light-headed from the effort, I slipped and somehow cut my wrist on a boulder, continuing the day’s blood-letting. With a bit of third class climbing, I reached McGee’s east summit, and was once again faced with the headwall that had turned back one-handed me a few years ago. 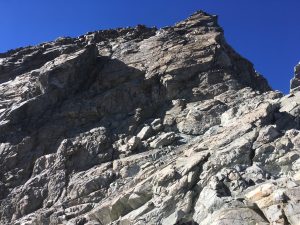 The descent to the notch was miserable, careful climbing on rotten rock or loose talus on the south side. From there, more third class led up some white rock to the base of the black face. The route was obvious, a right-facing dihedral with a crack in the back. I approached with some trepidation, as Bob had rated it 5.6, which is close to the limit of what I can solo. However, his trip report had also said that it felt secure, and I agreed. There were ample holds and opportunities to stem and jam, so while the climb was steep, it was not strenuous, so I had a good time making my way back to the sun at the top of the pillar. I would rate it maybe 5.4. 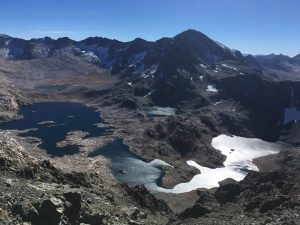 Above, more class 3-4 climbing led to the long-sought-after summit. There were surprisingly few visitors in the register, most of them familiar. To the east and south, I had spectacular views of the Evolution ridge, Palisades, Davis Lakes, and Goddard. To the west, I saw a surprising amount of smoke, either from the Alder, Mountaineer, and Moses Fires, or just because the Central Valley is a terrible place. 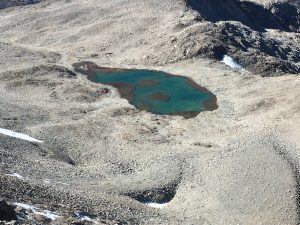 The easiest way off McGee is to drop to the saddle between its main and west summits, then take a loose chute south to Davis Lakes. However, this would leave me a long way from North Lake. Instead, I followed Bob’s route, traversing to Peter Peak and dropping to McGee Creek. I made another loose descent, then climbed some third class to the west summit, from which I could examine the rest of the traverse. It looked like an easy boulder-hop, but turned out to be loose and miserable, with plenty of large “surprise surfboard” blocks. The climb to Peter was easier than the descent. 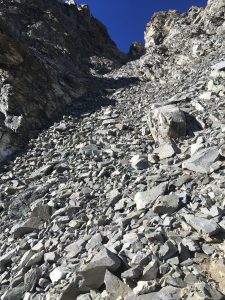 I had entertained the thought of continuing to Emerald Peak, an SPS peak at the northwest end of the ridge, but it looked like there was a tricky section just past Peter, then much more of the same wretchedness going over the two subpeaks along the way. Following Bob’s route, I dropped down the east side of the summit, then followed a loose gully to the moraine at the base of the ridge. Along the way, I managed to slip on a surfboard and bash my knee in exactly the same place I had on the way back from Picket Guard. Joy. When Bob had visited, there had been a snow tongue leading through the moraine to the easier ground below McGee Lakes. Unfortunately, no snow was left for me this late in the year, so I cautiously picked my way through loose boulders instead. 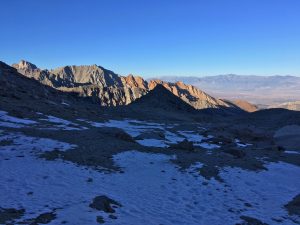 I felt pretty good jogging down McGee Creek, easily picking up the faint trail on the west side of the creek. I felt slow on the climb up the JMT and the use trail to Darwin Bench, but somehow found the energy to jog the flats on the Bench and past the Darwin Canyon lakes. I ground out the 1000-foot climb to Lamarck Col, pausing in a sheltered spot on the sunny side to put on my overshirt, hat, gloves, and angry music, then charged over the col. After a careful descent of the snowfield, I ran most of the descent, tired but wanting to reach the car before headlamp time. I jogged right through the trailhead, finally slowing to a walk at the pack station turnoff. It was still warm and light enough to comfortably rinse off my feet before driving down to the valley to interact with the humans and sleep.

McGee and Peter from Hermit