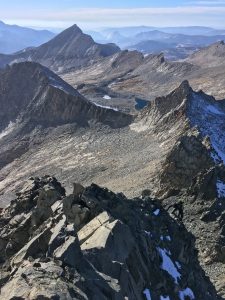 [This is out of order, but still worth recounting. — ed.]

Florence is a remote peak in southern Yosemite, located west of Lyell and Maclure, and not particularly close to any trail. Leor Pantilat had done a loop including Florence a few years ago, and it had been kicking around in the back of my head ever since. Circumstances were finally right this year, so I found myself camping at the Mobil station in Lee Vining, then driving up the road into the park at sunrise, not wanting to start too early at the always-cold Tuolomne Meadows. Leor, doing it early in the season, probably chose to go up the Lyell in the morning to avoid mid-day heat. Doing it late in the year, it made more sense to go the other way, jogging down the Lyell in the evening. 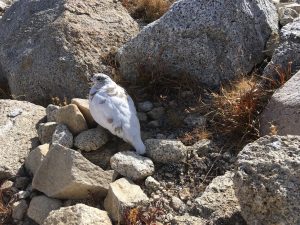 The trail maze was as confusing as always, but we wasted little time finding the correct route in daylight, and were soon headed up the trail toward Vogelsang Pass. It was uncomfortably cold for the first hour, but became pleasant once we climbed into the sun, with little wind down in the valley. We eventually passed the Vogelsang High Sierra Camp, its tents taken down for the winter, then turned to cross Fletcher Creek and climb to Vogelsang Lake. Above the lake, we nearly stepped on a flock of ptarmigans next to the trail. In the abnormally dry late October, their white winter plumage was the opposite of camouflage, but the birds acted as if they were invisible, remaining still even when we were close enough to touch them. (Their color change is triggered by the length of days, not snow on the ground.) 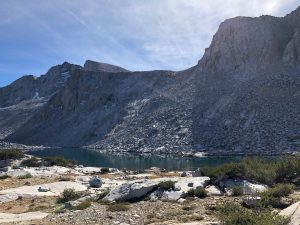 Birds sufficiently photographed, we continued over the pass, dropping down into Lewis Creek. The goal is to leave the descending trail at some point to traverse into Florence Creek just below Florence Lake. I chose a semi-arbitrary point, and found mostly easy cross-country travel and a short boulder-hop leading into the valley. Florence’s west ridge is mostly sheer on its north side, but there is a talus-field leading to a saddle behind Lake 10,451′. The shady climb was chilly, but thankfully the mix of slabs and stable talus was mostly snow-free. 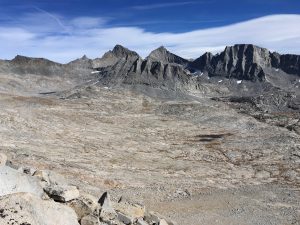 Emerging on the ridge, I was surprised to see a wildlife camera attached to one boulder; perhaps this col is popular with bighorn sheep, too. From there, a steady climb up sand and boulders leads to Florence’s summit. To the west, the Cathedral Range rises from Simmons to Maclure and Lyell at its southern end. Southwest of its spine is the barren, slabby flat of upper Hutchings Creek. We signed the register, then continued down Florence’s blocky south ridge. The easiest route would have followed the ridge to a saddle, but for some reason I chose to drop down a loose chute. There was a bit of good sand-skiing at the bottom, but not enough to make up for the hijinks higher up. 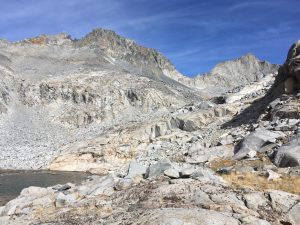 Maclure’s west ridge looks complicated, so the best route contours around Point 12,358′, past upper Hutchings Lake, then does… something. The ridge between Maclure Lyell is sheer between the two peaks, but can be gained either just west of Maclure or at a saddle on Lyell’s southwest ridge. I was tempted by the latter, but the days are short and it was getting late, so it seemed best to head straight for Maclure and home. The climb to the ridge looked miserable from afar, but was actually fairly efficient, following a slot through a lower cliff-band, then climbing slabs and fairly stable talus. 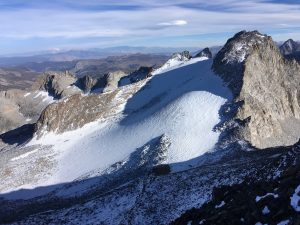 Once on the ridge, things became less pleasant. The crest is made of some chossy black rock, and north-facing aspects were holding snow that would not melt until spring. I climbed some class 3 rock to the crest, did a bit of sketchy and partially snow-covered climbing on the north, then emerged on the narrow ridge 50 yards short of the summit. I dug out the register, then retreated to a sheltered spot to add my name and look for my previous entry. It was cold and windy, and the descent was unpleasantly north-facing and snowy, so we wasted little time on the summit before taking the ridge toward Lyell, then dropping down the boulder-field west of the dead Lyell Glacier. Below the glacier, we finally found easy travel down the head of Lyell Canyon on slabs and grass, with a faint use trail from time to time, and eventually reached the JMT below Donohue Pass. 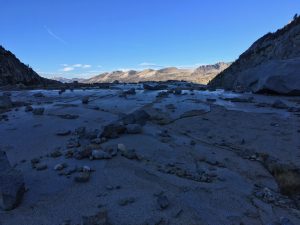 The trail starts with an annoyingly stair-stepped descent from 10,500′ to the flat part of the canyon at 9000′. From there, it descends a mere 300′ over 8 miles to the crossing of the Lyell fork. This was supposed to be the fast, cruising end of the day, but it was slow going on tired legs, and our late start meant generous headlamp time. However, the stars were clear with no moon, and the temperatures were comfortable, so I didn’t mind the nighttime commute. We drove back to the Mobil while warming up leftover burrito in front of the heater, then I slept again at my scenic spot overlooking Mono Lake.