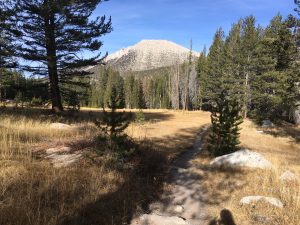 Mount Guyot is an unremarkable mound of sand and talus lying southeast of the Kaweahs across the deep Kern River valley. It is usually reached out of the high Horseshoe Meadows trailhead via Cottonwood Pass and the Pacific Crest Trail, a 30-mile round-trip hike with not too much elevation gain. I was already in the Lone Pine area and looking for a medium-difficulty outing, and the Horseshoe Meadows road was still open, so I decided to take advantage of it. I sketched out three options: Kern Peak, Muah and Cartago, and Guyot, then headed up the road to sleep on my decision. 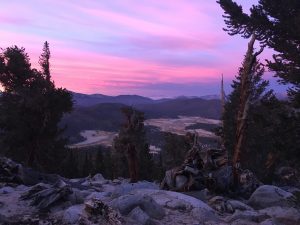 I woke to my 4:30 alarm, and was groggily confused for a minute when my phone said it was 3:30. I belatedly remembered the time change, then pretended to sleep a bit more before finally starting around 5:00 PST. I had done Cottonwood Pass twice before, and its sand and horizontal switchbacks sucked this time as much as the last two, but at least I got to do most of it in the dark. Beyond the pass, the trail makes a near-level traverse around Cirque Peak in a sandy trench before entering Rock Creek. 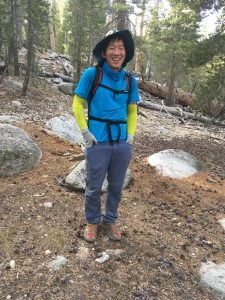 I had been to the upper Rock Creek crossing to do Joe Devel and its neighbors many years ago, but the lower crossing was new to me, and I had a sinking feeling as I hiked and jogged from 11,200′ down to the creek at 9600′. Despite the perfect conditions, there aren’t many people out in the high country now, so I was surprised to see someone coming up the trail toward me, and even more so to realize that it was Robert! Oddly, he seemed to half-expect me to be out in the area. We talked for awhile, then I continued, glad to have randomly chosen this hike among my three options. 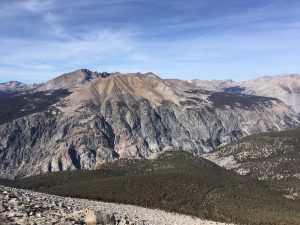 From Rock Creek, the trail switchbacks up the north side, then continues along Guyot Creek to the saddle between Guyot and Chamberlain. I left it somewhere on the flat before the pass, angling for Guyot’s northeast ridge. The slope looked miserably sandy from below, but there were enough boulders to offer solid footing for most of the climb. I had been sweating in a t-shirt on the south-facing slope, so I welcomed the breeze when I finally reached the ridge. I stayed on or right of the crest on the climb to the summit crags, finding the occasional recent footprint. 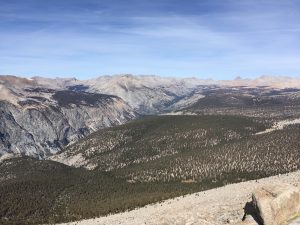 Guyot has several possible summit rocks, so of course the highest is the farthest away. I grabbed the register can, then sat out of the wind on the sunny south side to peruse the recent entries and have a sandwich. As expected, I noticed Robert from earlier in the day, and Iris (who Robert had told me was backpacking the area’s peaks) from the day before. I finished my sandwich, then descended the ridge a ways before dropping down the face. I avoided the rocks this time, enjoying the sand between them on my way back to the trail. 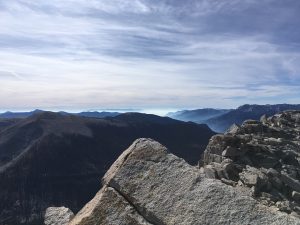 Smoke in the southern Kern

I stopped to dump the sand out of my shoes, then hiked and jogged back down to Rock Creek, dreading the climb back to Cottonwood Pass. Nearing the creek crossing, I saw a familiar figure sitting on the bear box, and startled her with a loud “Hi, Iris!” I had another early start planned for the next day, but chose company over speed for the slog back to Horseshoe Meadows. We traded packs, then took off through the woods on the gradual switchbacks and meandering trail. Lively conversation made the long sand-slog pass much less painfully.

A short distance down the other side of the pass, I looked at my watch and the sun, and realized that I needed to hurry in order to get ready and get enough sleep for the next day. I gave Iris back her overnight pack, then took off jogging down the horizontal switchbacks. I soon got frustrated, and cut directly down the open, sandy slope to the base. With a bit of jogging, I reached the trailhead about 12 hours after starting, then drove north into the night to make some more sandwiches before crashing at the next trailhead.

Smoke in the southern Kern