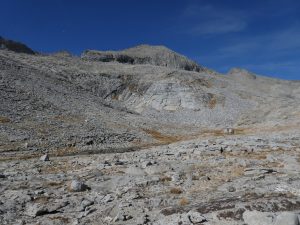 Pyramid from above Window Lake

I am getting close enough to finishing the SPS list (213/248) that I am tempted to tag the remaining remote and/or lame peaks. Pyramid is one of the former, located in an inaccessible part of the range west of Perkins and Colosseum. Bob had done it from the west, starting at Kanawyers and coming up Woods Creek from the bottom. However, I hate driving around to the west side, and perversely wanted to use Sawmill Pass, the last big east-side pass I had not summited. Sawmill has the lowest trailhead, at 4500′, and climbs 6800′ in 9 miles to the crest. The bottom 2000′ are sand, and miserably hot in the summer. However, it is pleasantly cool this time of year, and those 2000′ of sand are a joy to descend. 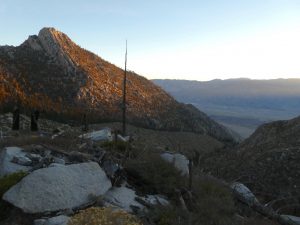 I got started around 5:00, opting for almost 2 hours of morning headlamp on a short fall day. It was chilly enough to be wearing an overshirt, hat and gloves even going fairly hard up the sandy climb. The trail climbs a ridge north of the lower slot canyon, then makes a rolling traverse around some rock outcroppings to reach the stream. I finally turned off my headlamp somewhere in the wooded switchbacks, and admired the sunrise on Sawmill Point as I climbed the Hogsback, which may be an old medial moraine between two branches of Sawmill Canyon. I passed Sawmill Lake, where we had left the trail to climb Indian Point during the Sierra Challenge, then was surprised at the distance to the pass. I finally reached it after four hours of work, half-way to my destination and still unable to see it. 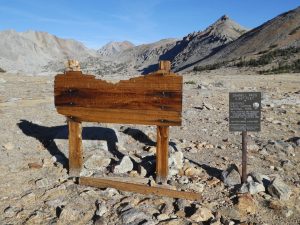 The “unmaintained” Sawmill Pass trail had seen recent maintenance on the east side, where some large trees had been sawed through recently. However, it is in much worse shape on the west side, occasionally reduced to a mere line of cairns as it crosses the grassy bogs past Woods Lake. 1000′ down from the pass, I reached the JMT behind Mount Cedric Wright, and began jogging down the broad valley of upper Woods Creek around Crater’s south side. 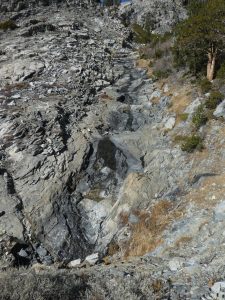 Just past the White Fork, I headed uphill toward the barely-flowing Window Creek. I had long wanted to visit this remote drainage, where experienced ranger Randy Morgenson had drowned, possibly when a snow bridge collapsed. When I finally found Window Creek, I could understand why: the creek flows through a narrow gorge in most places. While I could easily walk up the gorge next to the small late-season trickle of water, the gorge would hold snow well into the season, and walking up that snow would be the quickest way through the valley. 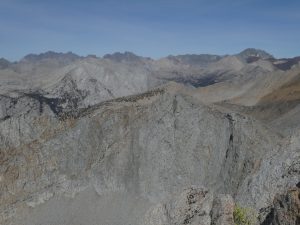 One normally finds some signs of human traffic in trail-less sections of the Sierra, whether an old fire ring, a faint use trail, or a flat spot for a tent. However, I saw none of these as I made my way up-valley; like Dumbbell Basin, the place was wonderfully free of human signs. Nearing Window Lake, I finally got a glimpse of Pyramid, and of the ridge connecting it to Window. I hoped to do both, but it looked potentially involved, with cliffs along its base blocking easy escape. I continued up the streambed, then left it east of the saddle south of Pyramid to hike up some easy slabs. A bit of a scramble got me to the upper talus-face, where I made an ascending traverse to the summit. 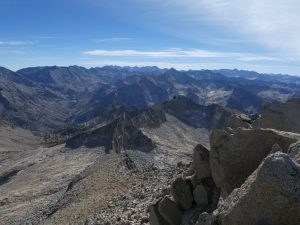 There was no register canister, just a lid, but amazingly the booklet wrapped in plastic bags had survived a couple of years. I added my name, re-wrapped it in bags, and tried to protect it with the lid as best I could. The ridge to Window looked tricky, and some people I know had written in the register that it was 5.6. I suppose I could have tried, but it had taken me 7h40 to reach Pyramid, and I decided I would rather try to make it home by dark than play around on serious, remote terrain. 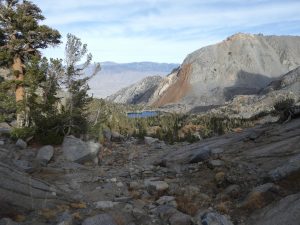 I retraced my route, eating my second-to-last sandwich before the grind back up the JMT, and my last partway to Sawmill Pass. 6800 feet and nine miles of descent is no joke, but Sawmill was mostly as pleasant as I remembered. The top part is a bit rocky, but much better than neighboring Taboose. The switchbacks between Sawmill Lake and Meadow dragged on a bit, but from the meadow on was almost all a blast. The part along the creek is soft leaves and pine duff, with a good grade and not too many switchbacks. After some suckage traversing out of the creekbed, the final sand descent is pure awesome, soft sand and a perfect grade to really open up. (Wear long pants, though — without them, the buckthorn will make you pay!) A final hike through a couple of ravines in the desert got me back to the car with enough time to wash up without my headlamp. This mission had been more fun and taken less time than I anticipated; it was a good day.

Window Peak poking out at left

Pyramid from above Window Lake

Time to bomb some sand…