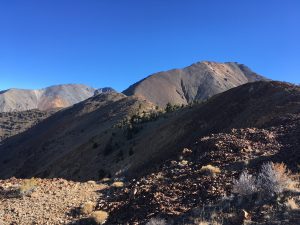 During my recent beating at the hands of White Mountain’s west ridge, I had a couple of thoughts. First, the math says that ~7.5 miles and ~9500 feet of gain (including ridge bumps), even over nasty desert cross-country terrain, should be doable in the 4:xx range by a reasonably fit runner. For example, averaging 2000 ft/hr, it would take 4:45. Second, I thought that the other west ridge looked better than what we dealt with. Looking at a map later, it seemed like the best way to do this was to start at the base of a steep dirt road to some antennas at 5260′, slightly lower than the Subaru-accessible trailhead for the Jeffrey Mine route, and almost exactly 9000 feet below the summit. It turns out that I was right: using the other ridge, I took 3:59:30 car-to-summit, and 7:01 car-to-car. Climbing 2375 ft/hr over mixed desert terrain seems reasonable given my current fitness, but there are definitely some guys out there who can beat it.

I drove the “aqueduct” road to where the antenna road turns off, then pulled into the single parking space for the night. The part I drove was definitely Subaru-friendly, and probably passable for a decent driver in a normal sedan. Figuring I would take something like 4-5 hours for the climb, I started at 7:30, so I would reach the top around mid-day. I took just enough stuff to survive: wool overshirt, windbreaker, hat and gloves, 1.5 liters of water, and 1700 calories of food (2 packs pop-tarts, 2 Clif bars, 1 pack granola bars).

Just as I started, two guys drove by to check up on the antenna. They seemed neither surprised nor concerned by the weirdo parked below their equipment. I was soon glad I had not tried to drive farther up the road, as it quickly becomes incredibly steep. I was surprised their truck made it up. When I reached the antennas, the two were apparently holding up their phones. I said “hello,” then left them to their work, following a much fainter road farther up the ridge.

That road eventually started going the wrong direction, so I took off across easy cross-country, passing the remains of a survey tripod on one of a couple of bumps. On the other side, I was surprised to see a faint old trail below. While it was hardly necessary in this open terrain, it did make it more runnable, so I jogged some of the gentler sections heading up toward the forested part of the ridge. There was prospecting all over the Whites, so perhaps this was a pack trail to some old, unprofitable claim. 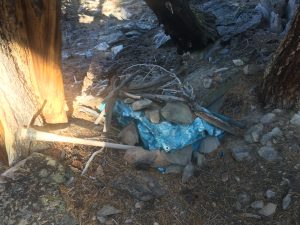 The trail continued into the piñon forest, but soon faded too much to be useful. I continued up through the open forest as it steepened toward the treeless headwall that I guessed would be the crux. As usual in the Owens Valley, I had no cell service at the trailhead, so I turned on my phone’s antenna to do a bit of texting, then turned it back off to continue my woodland march. Along the way, I passed a pick, shovel, and tarp-covered supplies, of newer vintage than the trail, but apparently abandoned. 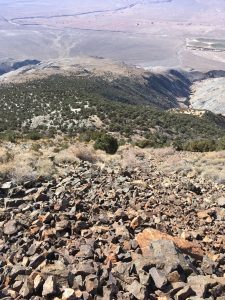 The headwall was every bit as bad as I had imagined, 1000 steep feet of loose talus, some of it covered in sagebrush. I started up the bottom of a shallow ravine, where talus is often more stable, then tried a rib, then some brush, then went back to the bare talus. It was all horrible and discouraging, and I briefly lost focus, costing me some time. 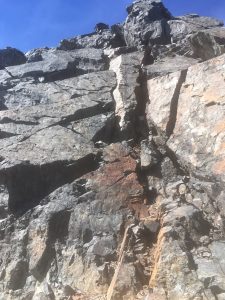 Fortunately, this is the only truly awful section of the route. Above, the ridge is open talus and dirt, stable enough to jog along the crest. As on the upper ridge, it is almost never worth dodging around small bumps, since the sides are usually steep and/or loose. I found a small cairn on 11,156′, and a larger one on 11,395′, just before the descent to the saddle above Jeffrey Mine Canyon, where I joined the familiar route. Knowing what to do now, I followed the faint sheep-trails above 12,000′, then stayed on the ridge crest over the bumps leading toward the summit. Nearing the final false summit, I saw that I had a chance at going under 4 hours, and dug deep for a bit of extra speed. Light-headed from the effort, I had to be careful on the few exposed spots. I jogged across the summit platform to the hut, and saw that I had made my goal by 30 seconds. Yee-haw!

The summit register had accumulated a surprising 4-5 pages of new entries since I had last visited two weeks before. I signed in again, put on all my clothes, then started down. Though the temperature was probably about the same, it was fortunately much less windy than before, and I even took off my shell and gloves below the false summit. I was as slow as expected re-climbing the bumps on the way down, and did not feel like pushing it on the unstable talus. 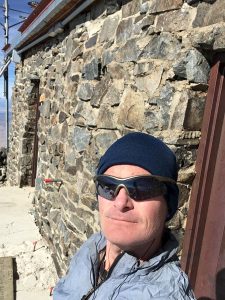 Descending the headwall was unpleasant, but to my surprise, I think I went down a bit faster than I climbed it. It is easy to wander off one side of the treed ridge below, and I had to regularly correct myself by looking at my track from the way up. Once out of the trees, I picked up the old trail, and even felt enough energy to run most of the way back to the trailhead. I could definitely have descended a bit faster, but the 4-up/3-down ratio conveys the fact that much of the route is semi-loose talus that is easier to handle going up than down. Now is the perfect time of year to do this route, with overnight valley temperatures in the 40s, summit highs around freezing, and almost no snow on the route. Go get it, fast people!

Cairn on one bump

This entry was posted in California, FKT. Bookmark the permalink.