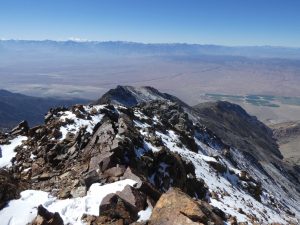 [Skipping over some uninteresting stuff to catch up. — ed.]

White Mountain Peak is the highpoint of the Inyo-White Range, which forms the eastern side of the Owens Valley. I have climbed it the usual way twice before, making a long drive east from Big Pine to Cedar Flat, then north on a decent dirt road through the Bristlecone forest to where it is gated, finally hiking the remainder of the road from near 12,000′. However, White rises 10,000′ from the valleys to either side, and its west ridge, starting from 5,000 feet, is a much more sporting way to summit the peak, and a classic of Owens Valley type II fun.

It had been on my to-do list for a few years, but somehow conditions and motivation had never aligned until now. Astute readers may have noticed the coaching tab above, about which more later. I had suggested this route to Shannon, an athlete interested in long-distance adventures, as a way to put in time and intensity with less damage than a long weekend trail run. When a change in plans put me in the area around that time, I offered to join her. The company would help my motivation on a desert bushwhack, and I thought I might be able to help with route finding (sort of the opposite, as it turned out…).

We met at the junction of Highway 6 and White Mountain Ranch Road the evening before, then followed the SummitPost directions up a rough road (4S135 on the Forest Service topo) toward Jeffrey Mine Canyon, eventually stopping at a washout near 5200′. Later, we found that it is possible to drive a Subaru to the canyon mouth at around 6000′, probably by following the Hill Ranch road, then turning on 3S162. Another approach, avoiding the Jeffrey Mine entirely, would be to take road 4S75 to the forest boundary around 5300′, then take the steep road to a “Comm Facility” before heading cross-country. The Whites and Inyos are a wild place, more like Nevada than California, and probably only locals truly know their way around.

I woke at 4:30 in the unpleasantly cold dark, downed my cup of sadness, and fretted about the temperature. The forecast suggested 40s in the valley, a high around freezing on top, and not much wind. It seemed around 40 now, but it had been windy at night, so at the last minute I (fortunately) shoved my down parka into my pack. The plan was to hike the “trail” to the Jeffrey Mine cabins by headlamp, summit by early afternoon, and return to the cars before headlamp time. Despite my best efforts, we managed to stay fairly close to this schedule. 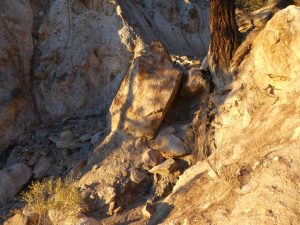 While there is technically a trail to the cabins, it is easy to miss where it leaves the ravine at night, so of course I did. Instead, we continued up the bottom of the canyon, which started as nice hard-packed sand, then gradually became more annoying as it steepened. We hopped the boulders and bashed through the willows, efficiently gaining elevation but increasingly concerned that we would be boxed in as the chossy canyon walls steepened. It eventually happened, of course, and we found our headlamps illuminating a couple of wedged chockstones undercut by erosion. Left looked wrong, so I tried right, eventually finding some fourth class choss-stemming that got around the problem. Above, a dirt-traverse deposited us back in the canyon bottom. 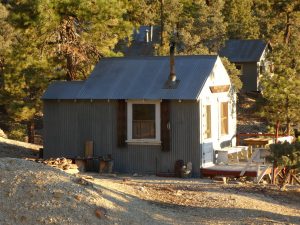 Surprisingly, the rest of the ravine more or less worked; even more so, we found an arrow and ladder, suggesting that we were “on route” for some version of “route.” Where the canyon opened up, we found a faded but obvious trail coming from who knows where and, despite the shenanigans, we reached Black Eagle Camp around the end of headlamp time. Despite being only reachable on foot (or perhaps because of that), the cabins looked surprisingly nice, though there was no time to peek inside. 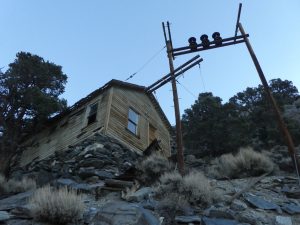 There was a sign indicating a trail to “upper mine, 2 miles,” and for some reason I thought it would be a good idea to take that, since it would put off the desert cross-country travel. This turned out to be only half a mistake. On the good side, we got to see the upper mine, which had honeycombed and partly consumed a colorful rock pillar across from the once heated and electrified dormitory. It is hard to imagine how the miners transported the building materials — much less the telephone poles — from the valley by mule. 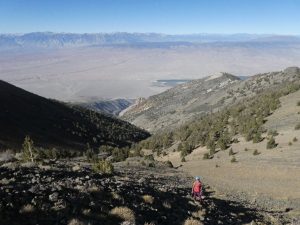 On the bad side, this route turns out to be the “not recommended, brushy northern ridge” alternative mentioned on SummitPost. Things were looking good on the climb past the mine and up the broad lower ridge, with bits of trail and the occasional cairn. However, it got ugly where the ridge flattened out, with chossy bumps on the crest, and brushy scree and sand on the south-facing side. Rather than going over the bumps, I for some reason chose to side-hill below them, which was a slog and, in retrospect, a bad idea. Oh, well.

Where the two west ridges meet, we finally found a sort of eroded gully with more stable talus, which eventually led to the ridge crest and views north and south along the range (also cell service, absent in the town of Chalfant). There were bits of trail on this part of the crest, though it was hard to tell if humans had helped make them, or just bighorn sheep. 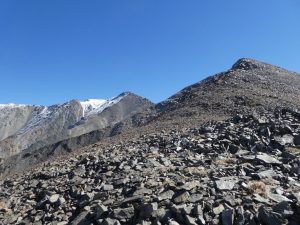 Though the summit looks close, there is a lot of ridge between 12,000′ and 14,000′, with a couple of bumps to cross and a fair amount of slow travel on semi-stable talus and bad rock. The SummitPost description mentioned traversing around one of the bumps on the north side, and continuing the day’s theme of poor route-finding on my part, I chose the wrong bump. What followed was some sketchy, cold traversing on snow-covered third class choss. I’m fairly used to it, and my relatively new and aggressively-lugged shoes handled it well; Shannon had a sketchier time of things in approach shoes with worn-down dot-rubber. The “correct” bump to traverse around is probably the last one, just 100′ or so below the summit, but it is not necessary — there’s a fairly obvious class 3-4 downclimb on the east side. The best approach to the whole ridge seems to be to stay near the crest, where it is most solid, and simply accept the up-and-down. 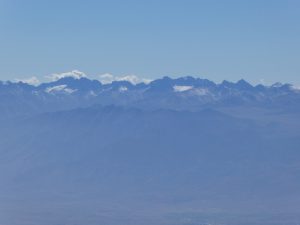 The air temperature was probably 35-40, so it was comfortable while moving in the sun and out of the wind, it was eyeball-freezingly cold in the steady wind near the summit. We took shelter in the lee of the summit hut, digging through the chest full of paper, booklets, and writing implements to find something that looked most like a register. I was glad I had thrown in the parka at the last minute, as I would otherwise not have been able to hang around before retreating as quickly as possible.

The less said about the way down, the better. I managed to choose a different bad route to the upper mine. We were both stoked to finally see trail again above the mine, and still had enough energy to jog a bit of the descent. The trail to the cabins was much easier to find during the day, though still obscure in places. It turns out that it crosses the stream-bed just above the arrow and ladder on top, and leaves it at the bottom to follow the old power line road. Though it is cairned, this bottom junction is very easy to miss at night. Surprisingly, despite my best efforts to make life difficult, we made it back to the cars with no headlamp time, albeit barely. It was another surprisingly cold night in the valley, so it took me awhile to make my hands work well enough to make some tea and find food. Neither of us felt like driving anywhere, so we soon retreated out of the wind to our respective cars.

Shadow of Whites and farms