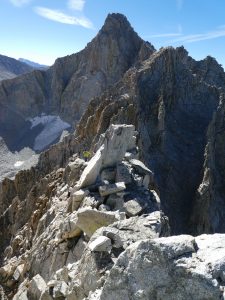 With all parties assembled, it was time for the main event. I was elsewhere the year before, when a group of some of the same people climbed the harder Ericsson Crag #1 (not without incident). This time Bob, ten-fingered Tom and the others had returned for Crags #2 and #3, both class 3-4 scrambles from the saddle between them. We had breakfast at various times, then started up the trail toward Lake Reflection in a pack. Fortunately the others had been this way before, because I would never have found the old Harrison Pass trail on my own. Though it is blazed, and was once one of only two trails over the Kings-Kern Divide (Junction Pass being the other), it has all but disappeared since the creation of Forester Pass in the 1930s. 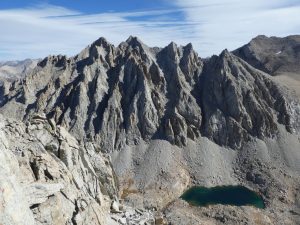 We left the old trail a bit above a lake to cross some talus west of the Crags, angling toward a chute between our two targets. The chute had apparently been filled with snow the previous year, but was now steep, loose and treacherous. With the seven of us spaced out by the approach, climbing the thing without killing those below was a slow, cautious affair. Fortunately everyone was well-behaved, and there were no injuries this time. The chute was mostly class 2-3, with a bit of fourth-class shenanigans to the right, or a lower detour to the left, required to get around a chockstone. 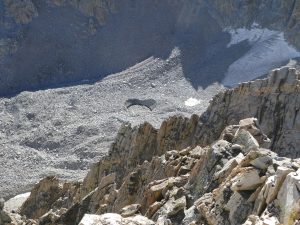 The chute branches and becomes indistinct as it nears the ridge. Partly because I thought it made sense, and partly because I wanted to be in the sun, I headed up one of the branches to the left, while Bob and Robert waited behind to see if I was wasting my time. I emerged on the other side, happy to be in the sun and somewhat out of the wind, to see Deerhorn’s complicated southwest face across the way, and the buried remnant of a glacier in Ericsson’s shadow below. Traversing down and around left, I found my way back up to a notch, from which informed the others that this was the way.

Above where I had hailed them, there is a steep step in the ridge. I went up some fourth class to the right, while they found another path to the left, and Scott and Iris, coming later, went up the middle; I think all routes are similar. Beyond the step, the ridge flattens out, with various class 3-4 options going over or around blocks and pinnacles leading to the summit. 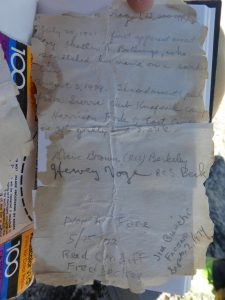 I was surprised and pleased to find an old SRC register canister on this obscure and rarely-visited summit. This contained a book placed in 1991 by Fiddler and Keating, traversing the crags in 1991. Nestled between its pages was something even better: a fragile 1939 register held together by stickers, mentioning a 1921 sardine tin. I looked around a bit for the tin, then added my name to the book and sat down out of the wind to watch the others make their way along the ridge. They each in turn admired the relic, then we all departed for Crag #2. 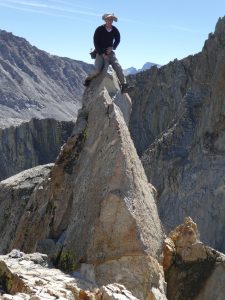 We passed Iris and Scott at the step, then traversed past the notch on the east side of the ridge. From there, we found a variety of class 3 routes traversing up that side of the ridge, leading to a short scree-field below the summit area. The true summit was a 12-foot-high class 3 pyramid, which we took turns mounting. We found a few more scraps of paper in an inverted jam jar, far more fragile than those on Crag #3 and probably not long for this world. Bob left a book in one of his new custom register cans, then we sat around watching Scott and Iris do… something on the other summit. At first I thought they were posing for silly photos, but then they started descending and reascending different sides of the summit. Later, we found out that they had not found the old paper scraps, and were looking for a sardine tin. Sorry, guys!

When we returned to the notch, Tom and Robert returned down the death-chute we had ascended, while I convinced Bob to join me in descending the other direction, toward Harrison Pass. The chute on that side looked better, and I hoped to pick up the old trail. Also, there was the Minster… We descended the chute in tandem on opposite sides, finding it shorter and slightly less loose than the one we had ascended. The Harrison Pass trail has more or less ceased to exist, but at least the cross-country travel was fairly easy. 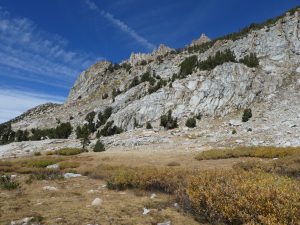 I stopped to wait a minute for Bob below the Minster, which looked close and easy, then glanced at it and asked “shall we?” Probably neither of us would have done it on his own, but we somehow managed to convince each other. We took off through the nasty sand and sparse brush of the lower slopes, aiming for the middle of the Minster’s various spires. We knew from Eric’s report that the highpoint was on the far left (west) side, and hoped to skip some tricky traversing. 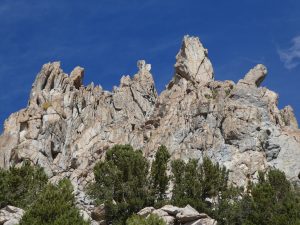 We eventually passed through a notch midway through the formation, and began scrambling along and up the north side somewhere near the middle. This turned out to be a bad idea, as the north side is steep and composed of a disgusting mix of decomposing granite and spiny brush. I went up too early, finding myself on the third spire from the end, then made a tricky traverse back down to join Bob, whom I had advised to stay low. More class 3-4 scrambling eventually got us to just below what I think might have been the summit. I tried the final pitch, but backed off, not liking the climbing, and not wanting to push it for some obscure, minor summit. 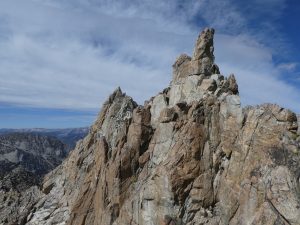 View from the wrong summit

Retreating in near-defeat, we convinced each other to give it one more shot from the other side. With Bob leading, we climbed to a gap, took off our packs to squeeze under a chockstone, then found a short, tricky descent to easier ground on the south side. We eyed the south side for a bit, and I was just starting up to check it out when we heard Kristine shouting to us from the summit. She explained that she had climbed the west side, the one aspect we had yet to explore. sigh… 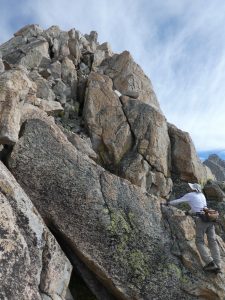 We continued our circumnavigation, then made our third class way upwards, running into a line of cairns that Kristine had left to help find her way back down. I was grateful for their help at this point, and thanked Kristine as we passed her on her way down. Finding no register on the summit, Bob left another of his cool custom canisters, then we headed back toward camp, satisfied at finally solving the Minster’s frustrating little problem. We found decent boot-skiing down to a lake, followed something like the old Harrison Pass trail, and were soon back at camp. As is their wont, Iris and Scott dallied along the way, finally arriving just before dusk. We again hung around until some pathetically early hour of the night, then retreated to our shelters to pretend to sleep.

Iris and Scott on Crag 3

View from the wrong summit

2 responses to “Ericsson Crags 2 and 3, Minster”