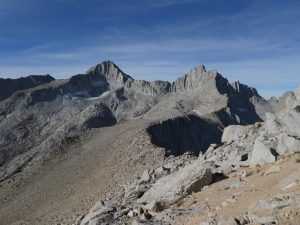 Since I was already awake well before first light, I followed Kristine’s military schedule, eating breakfast in the dark and starting hiking just before the end of headlamp time. Robert and Kristine were headed for “Marmot Ridge,” then North Guard and onward; having already done the Guards in 2012, I decided to join them for the first, then figure out something else to do afterwards. We made our way up the Ouzel Creek drainage, which contained pines, willow brush, and no water-ouzels. 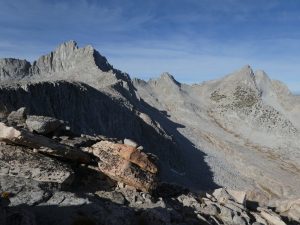 Marmot Ridge the high-point of North Guard’s long northeast ridge, and its true summit is not clear from below. At some point we left the creek, trying to pick the best way up and left across the face toward what seemed like the summit. Robert was dragging a bit, but Kristine kept up a solid pace, fused ankle and all. She turned out to be not only a solid scrambler, but a jack-of-all-trades: she made her own pants and pack, mixed her own powdered drink mix, tended a small farm at home, and probably all sorts of things I didn’t think to ask about. The slope was a mix of scrub pines, sand, and talus, but there always seemed to be a class 2 route that was not too unpleasant up to the base of the summit rocks. 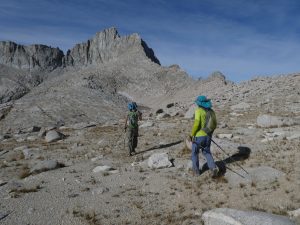 We ended up somewhere east of the true summit, and had to navigate a bit of a class 3 maze around and over various blocks and pinnacles to what looked like the highest. This seemed like the kind of obscure peak that might hold an old register, but we failed to find one in about 10 minutes’ search (it was too well-hidden), and settled in to eat and wait for Robert to catch up. After regrouping, we dropped to a plateau on the ridge east of North Guard, then diagonaled down to a nice lake below its east face. Here we parted ways, I toward the first notch south of North Guard, they toward the northeast ridge route I had apparently descended in 2012. 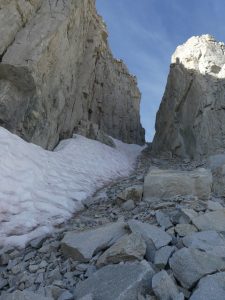 The notch looked like it could be either ice or a hideous dirt-chute, but was short and fairly pleasant, with reasonably stable rocks on its north side. In a heavier snow year, however, it is probably icy and impassable without crampons late in the year. From the notch, I had to make a long traverse around Mount Brewer’s west side, which required dropping down to upper Brewer Creek, then reascending easy slabs to the two nice little lakes I remembered from my last time through. 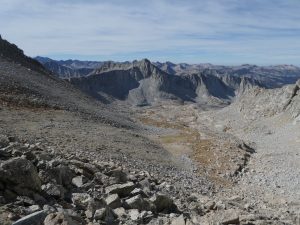 The next peak on my ad hoc agenda was “Sky Pilot,” a minor summit south of Longley Pass, but a 12er southwest of the col had looked interesting from the traverse, so I decided to tag it on the way. The climb proved less interesting than I had hoped, a long, flat talus-hop along the ridge followed by more talus leading to the summit. However, the summit proved more interesting than I had anticipated. It contained a large brass plaque, explaining that this was “Mount Sheldon,” named for Mrs. Mattie C. Sheldon, born in 1871 and still alive as of the plaque’s installation in 1959. Her grandsons seem to have christened the peak on their own, as the Board on Geographic Names is unaware of the name. I also found an old film canister, which may have once contained an older register, but now only contained a single sheet of paper signed by the ubiquitous Brian and Marie. 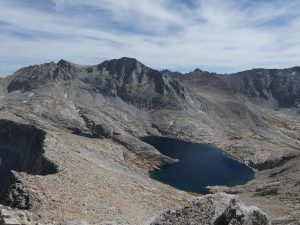 It was almost a straight shot from the summit, around the south side of South Guard Lake, and across Longley Pass to Sky Pilot. Unfortunately Longley Pass sucks, with lots of sand and awkwardly-broken slabs, so the journey to Sky Pilot was more exhausting than it looked. Also, there is a surprising gap between the visible and true summits. It looked like I might be able to downclimb a steep class 4-5 chimney, but I took the safe and easy route around the southeast side. 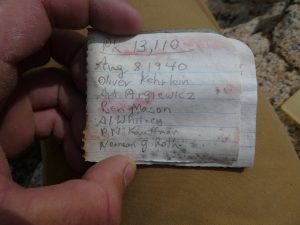 I had two options to return from here: either drop straight down Longley Pass, or continue south along the ridge to just before Thunder Mountain, then follow the lakes northeast to join the Longley route just above Lake Reflection. I didn’t want to hang around camp all afternoon, and there were rumors of treasure on Peak 13,110′, so I decided to take the long way home. The ridge from Sky Pilot to Point 3852.1m is jagged, so I bypassed much of it on annoying terrain to the right. The rest of the traverse toward Thunder is easy, with the highpoint of the final plateau near its southern corner. The promised treasure was still intact, and I happily signed in as the sixth summit party. 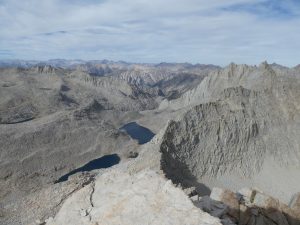 I really should have stopped there, but I had yet to climb the ranked 13er east of Thunder, and for some reason my upcoming meeting with Bob made me care about such things. I dropped off the southeast side of the plateau, descending below the snowfield/glacier on Thunder’s north face. After contouring around, I crossed a small glacier, then climbed some horribly loose fresh moraine to the ridge northeast of Thunder Pass (?). I climbed easy talus along the ridge east, then dodged some unusual chossy towers to find the register on the farthest one.

There was no treasure here, just a modern register with a few familiar names, including Robert’s from an early ill-considered adventure. I added my own, then continued north along the spine of the Kings-Kern Divide to the next saddle, where I found a reasonable descent to the unnamed lakes. From there, I had a dismally long and flat boulder-hop to rejoin the route from Longley Pass to Lake Reflection. 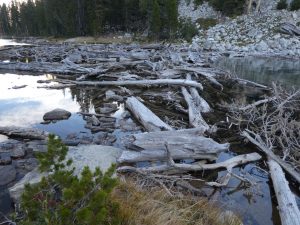 I was hoping for some sort of use trail, but was disappointed. Reflection’s south side is a brushy, talus-y mess, while the west has cliffs lower down. I stayed high on the west, picking up the occasional cairn or bit of game trail, but nothing resembling a regularly-used route. At the north end of the lake, I crossed the stream on an impressive log-jam, then joined the trail down to East Lake. I was thoroughly tired by the time I returned to camp, having put in a bit under 12 hours. Bob and Tom were preparing to camp in style, with a tent and clothesline. Robert and Kristine returned a few minutes later, then Scott and Iris just before dark. With a larger crew, we were able to stay out of our sleeping bags a bit longer, but still retired pathetically early to endure a slightly longer and colder night.

Charlotte Dome in front of Palisades