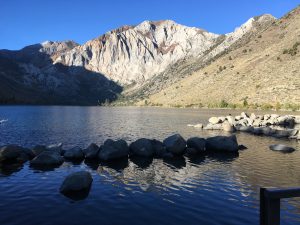 As much as I claim to be getting too old for the FKT game, sometimes I can’t help myself. Laurel’s northeast gully is a classic “workout route” out of Convict Lake, just south of Mammoth Lakes in the eastern Sierra. The area’s rock is absolute garbage, but avalanches and waterfalls keep this line clean, and the crumbly rock’s layers are angled to create positive holds in what is left. After an initial hike or jog around Convict Lake, and a short boulder-hop, the climb is remarkably sustained class 3-5.easy for about 4000 feet. The first time I climbed this route, I went too far left and finished in sketchy, crumbly terrain. The second, in 2016, I was climbing with a broken hand, and could not come close to Jason Lakey’s 1h47. This time, I had two hands and decent climbing shape, and managed a 1h31, better than I expected.

I waited until I thought the temperature was about right, then started my watch and took off from the trailhead sign next to the boat dock. I reached the boulders where one leaves the trail after about 15 minutes, then spent another 5 minutes boulder-hopping to the base of the face. From there, I was redlined almost the whole way up, with only a few pauses to deal with the crux sections that pass through smoother, steeper waterfall sections. I stayed in the gully most of the way, once accidentally getting out to the left, and once to the right in the broad bowl most of the way up. However, this time I knew where to go, and generally followed the left branches of the gully system until they fade out near the summit.

Right as the gully merges into the final choss-slope, I saw someone ahead of me making pretty good time. I was surprised to have company on a weekday morning, and grateful that he had not bombarded me with loose rocks when I was down in the gully proper. I reached the summit maybe 20 seconds after he did, checking my watch before coughing and gasping for awhile.

I had planned to establish a round-trip FKT, but (1) the Strava app on my phone had crashed, and (2) I decided I would rather chat. He turned out to be a guide from the Zion area who makes semi-regular pilgrimages to the eastern Sierra. He had taken something like 1h45 for the meat of the route, an impressive time since he was carrying a pack with food and water; I had carried nothing but an overshirt tied around my waist, counting on the food and water I had chugged at the trailhead to get me through the climb.

I signed the register, then took off north down the standard descent route. The use trail started off clear, then faded more than I remembered from 2009. I knew more or less where I was going, though, circling around the mountain’s north flank, then following the northeast ridge until I could drop down a sandy gully. This was steep and somewhat obnoxious, but fast until near the bottom, where it became brushier and I had to proceed with some care wearing shorts. I returned to the boulders near where I had left the trail, then ran as quickly as I could back around the lake with all the sand packed in my shoes. It had been awhile since I had showered, and I needed to interact with civilized humans later that day, so I found a secluded spot and, against my nature, fully immersed myself in Convict Lake for all of 5 seconds. Hoping that qualified as “hygiene,” I toweled myself off, changed into fresh clothes, and headed into town.

This entry was posted in California, Speed Record. Bookmark the permalink.