Posets, the Pyrenees’ second-highest peak, is just across the Rio Esera from Aneto. It has always been a bit tough to reach, and now that the old route up the Rio Eriste is subject to an unfortunate gate-and-bus system, the best approach seems to be via the Rio Estos. (Yes, all of these E-names are confusing.) Summitpost describes a hike most of the way up the Estos, then across the La Paul and Posets Glaciers, finishing on the peak’s north ridge. I did something similar, but instead took the trail up to the col near Tuca des Corbets, then a cross-country route to Ibon Alto and the Posets Glacier. On the return, I followed the standard route partway, then cut down via Ibon de Posets o Negro and back to the col. The marked trails are not very good in the high country, so this cross-country route is not much more difficult.

I started up the Rio Estos road by headlamp, passing a small, ugly dam and reservoir. I eventually left the road on a trail to the Ibon Grande de Batisielles, a large lake around 2250m. The trail starts out broad and well-defined, then fades to a line of painted marks and bits of wear above the lake. Though there is “no camping” in the Posets-Maladeta Park, there were a couple of guys milling around a tent at one lake, who had even brought a folding chair. This seems to be a general thing in Europe: while you are technically not supposed to camp in most places, either in your car or in a tent, people seem to do it anyways without getting in trouble.

From the Tuca des Corbets col, the “trail” drops below the Ibon de Eriste to join the standard route above the hut. Instead, I made a descending traverse to Ibon Alto, then side-hilled up toward Posets’ east face. This being a non-standard route, I saw a small herd of chamois and no people. The small patches of snow were rock-hard, but easily avoided.

Nearing the face, I could see the crowds on the standard route on the left skyline, and thought I might be able to join them via the ridge left of the small glacier. Things started out encouragingly, with a cairn and bivy site, but the last bit of the ridge turned narrow and steep. I might have been able to figure it out, but was not in the mood, so I retreated to the glacier and looked for the purported ramp from it to the north ridge. I eventually spotted it, climbing left-to-right at the boundary between the gray choss of the lower ridge and the red rock making up Posets’ summit. I (barely) managed to kick steps up the snow-covered glacier secured by my ice axe, then climbed a bit of slabby rock to reach the ramp.

The red upper rock looked chossy from a distance, but was surprisingly solid under the surface scree. There seem to be a number of paths to the ridge, and I took some random fourth class line that went more straight up than right. Reaching the ridge, I saw that there is an easier trail from the next valley to the west, accounting for the handful of people I had seen on the north ridge from below. A bit of scrambling and some exposed walking led easily to the summit cross. There was a steady half-dozen people, with those leaving being replaced by a steady stream coming up the standard route. I ate my sandwich off to the side, taking in views extending west as far as Monte Perdido and Pic Vignemale.

I followed the standard trail down as far as the saddle near Tuca Alta, then dropped down mixed slopes to Ibon de Posets, where I got some probably-safe water well away from human traffic. From there, it was easy cross-country travel to the head of Ibon de Eriste, and a painful 250m climb back to the col, where I met a couple of loud groups possibly bound for the refuge. It was a weekend, so I met a few dozen more people, mostly day-hikers, on the trail back to the car. I went down to Benasque to use the pleasant internet spot under a large tree in the town square, then found a suitable spot to camp, probably illegally. 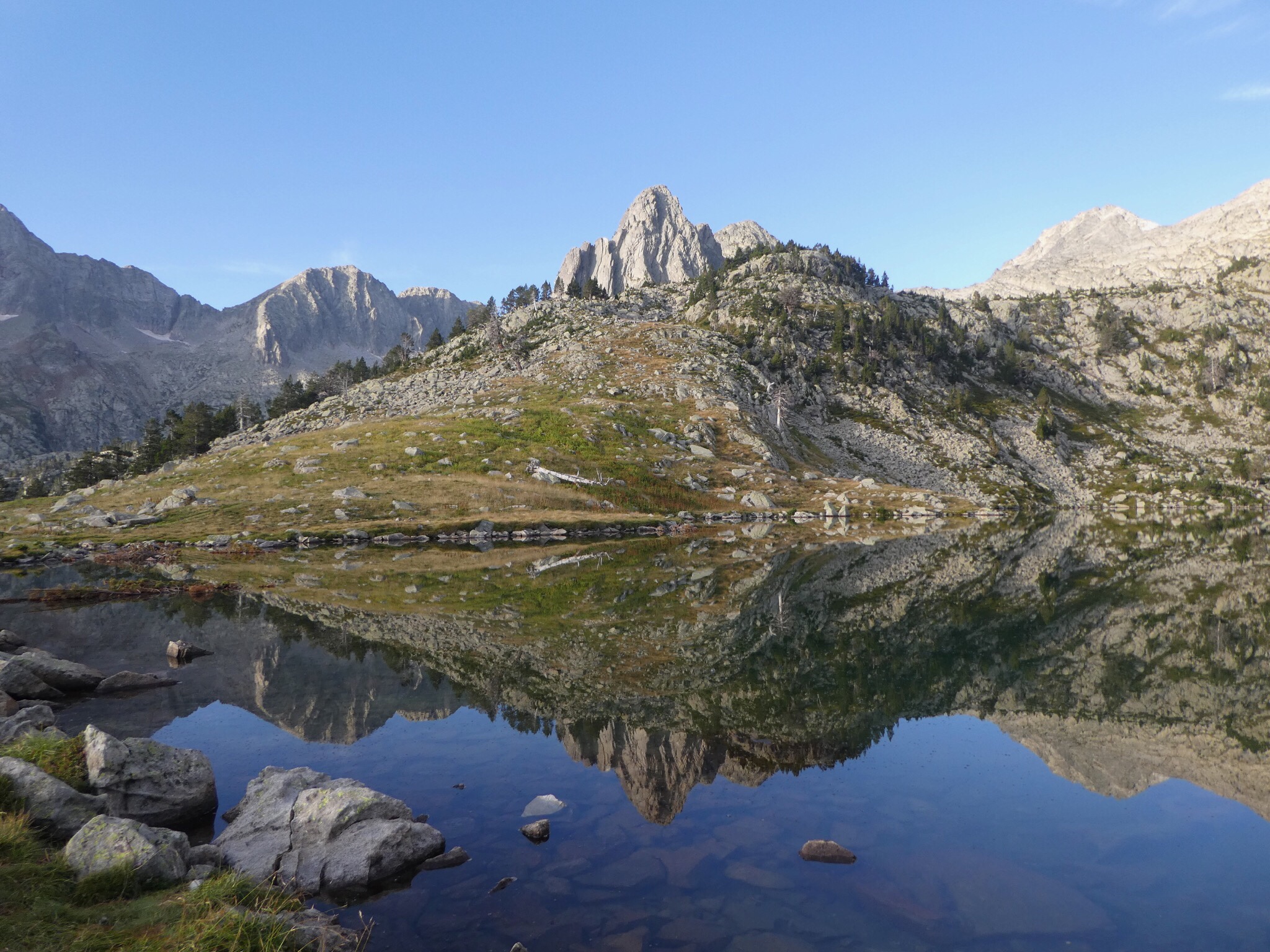 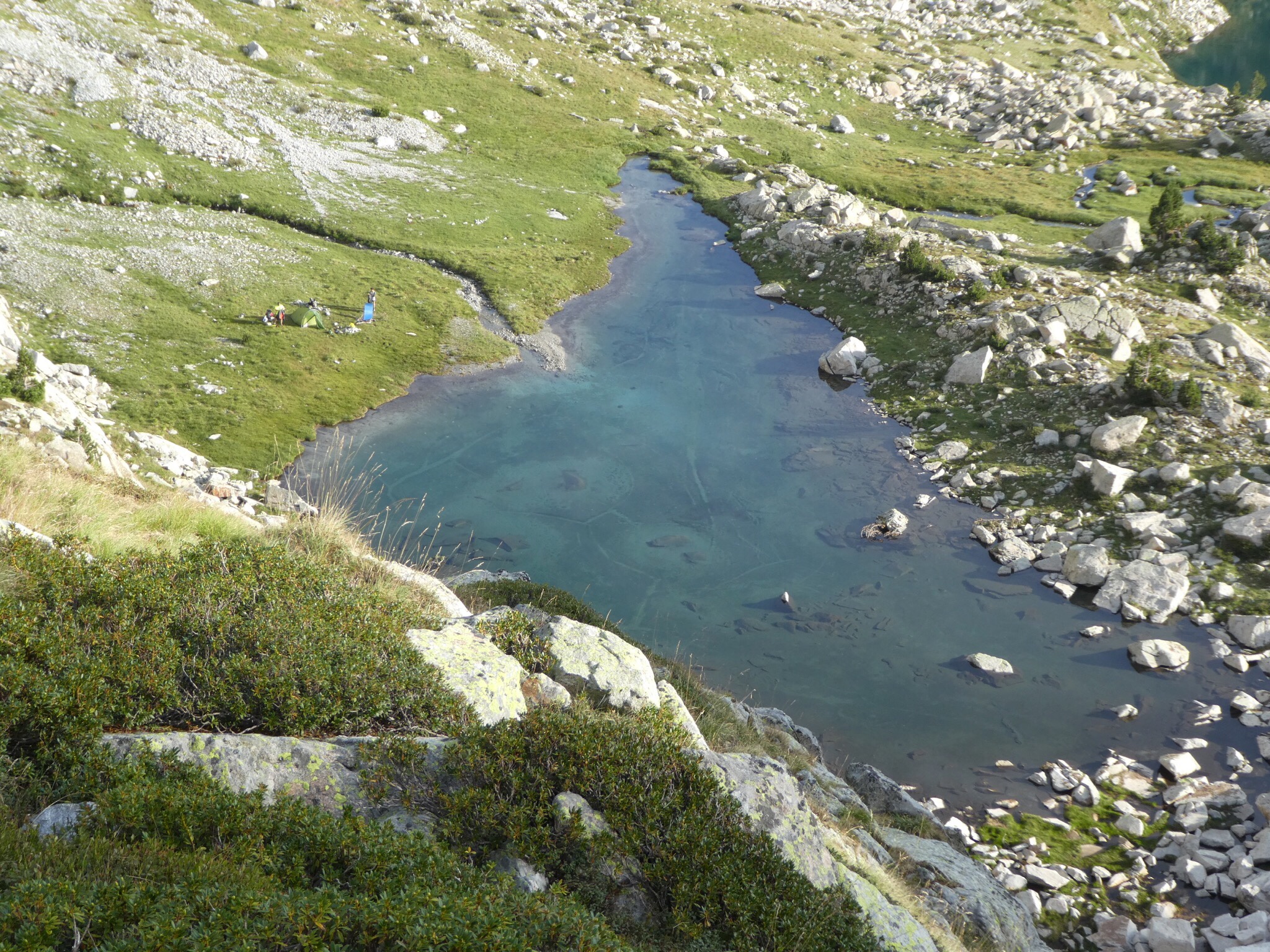 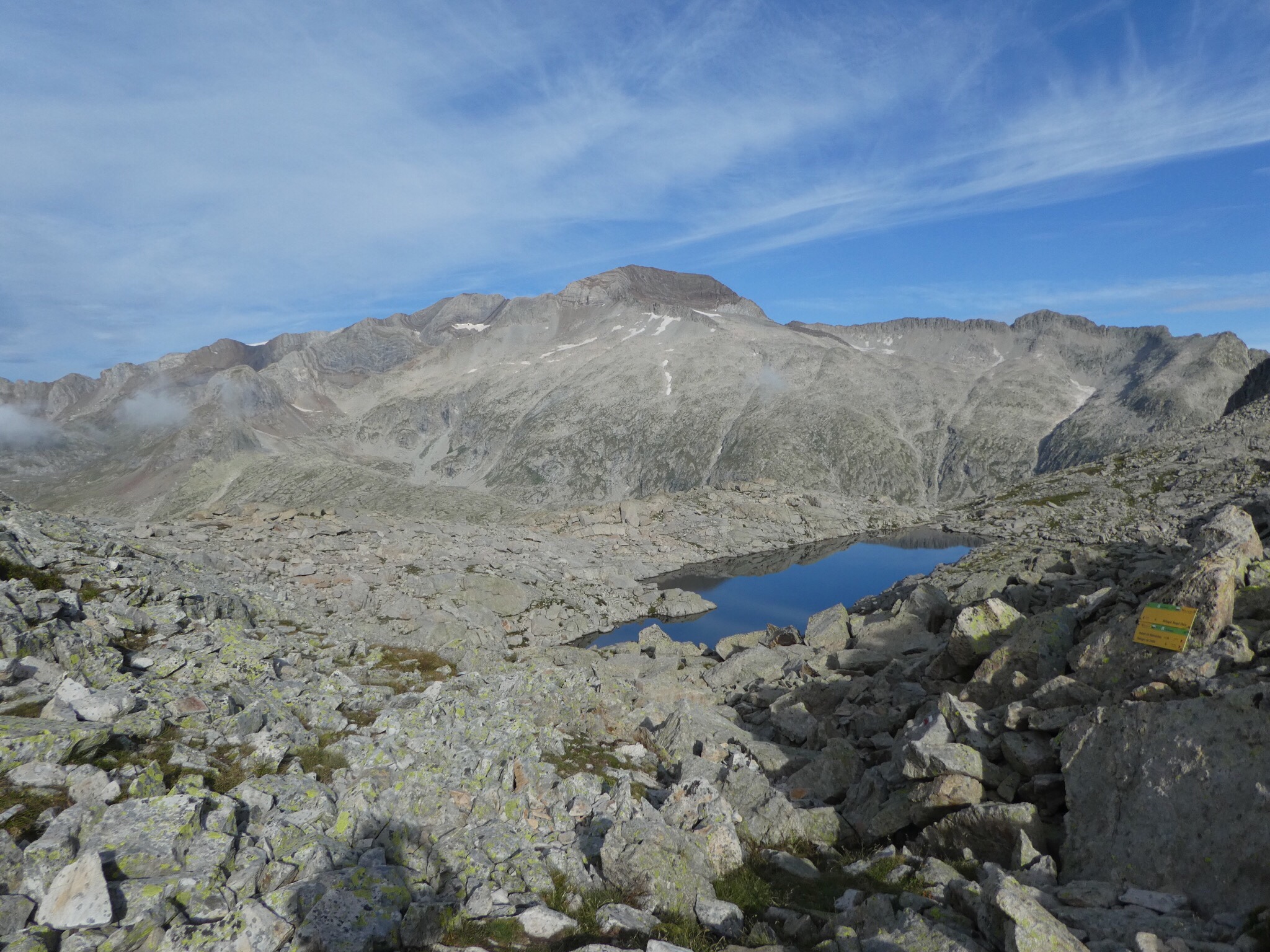 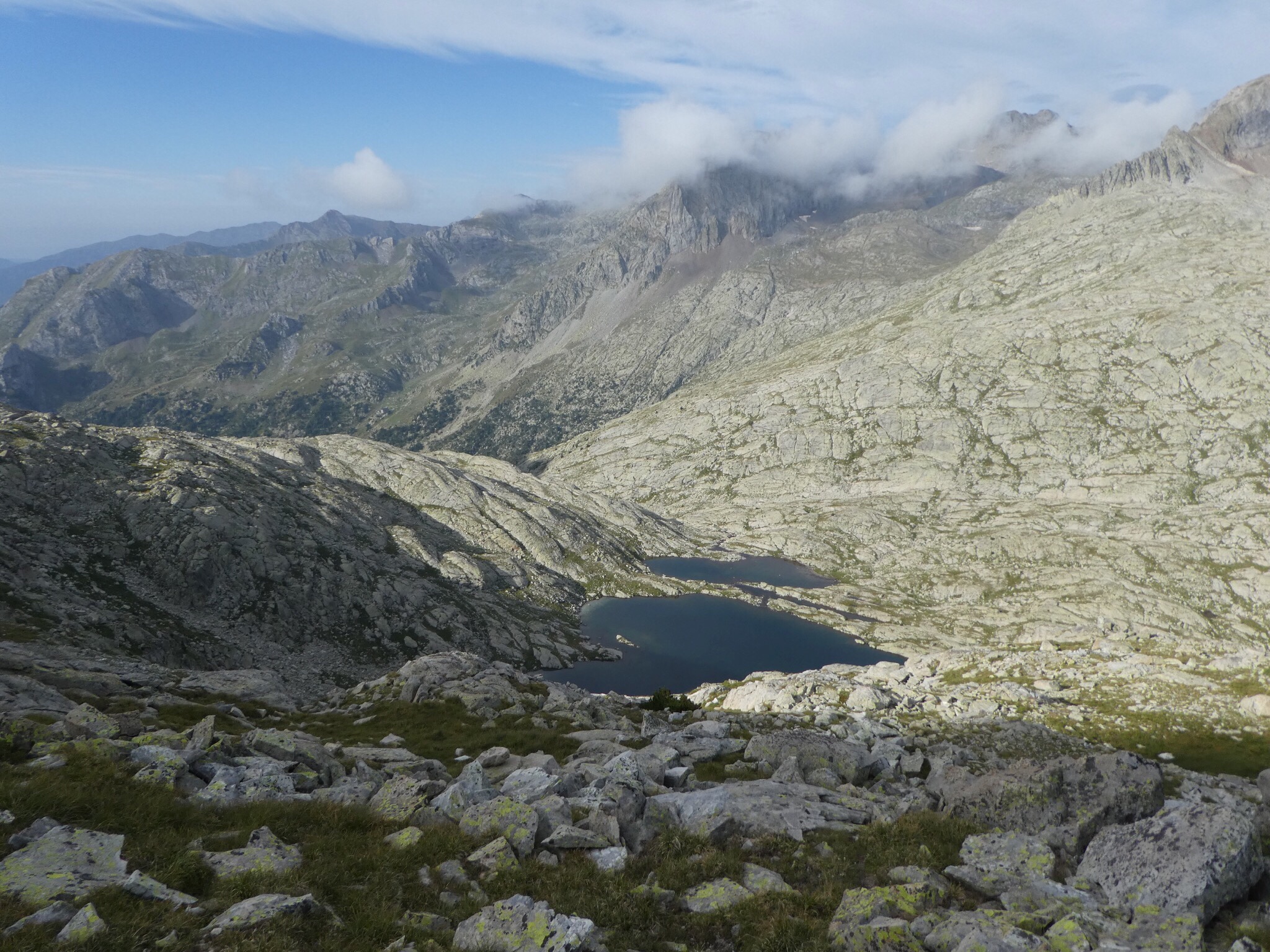 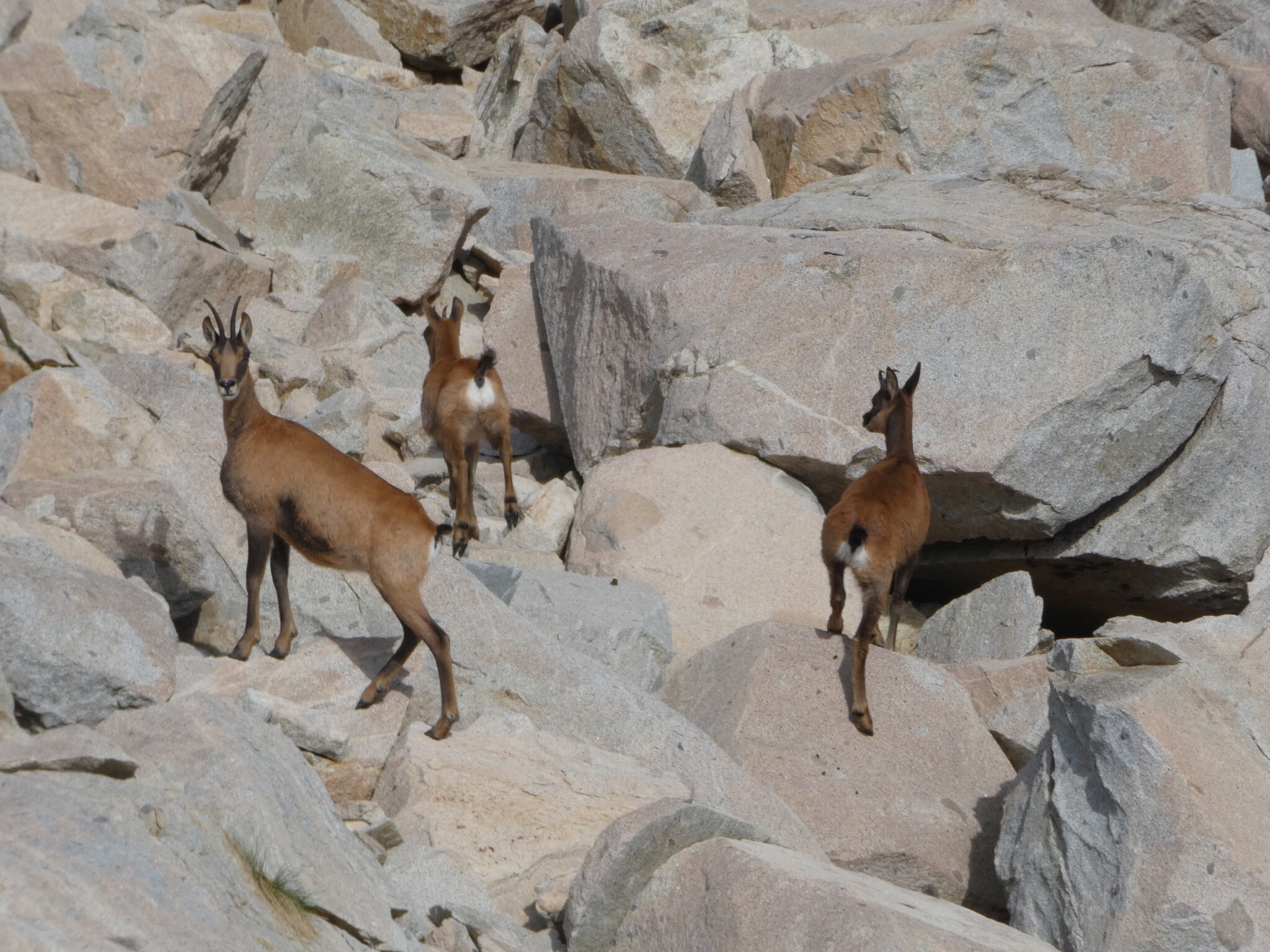 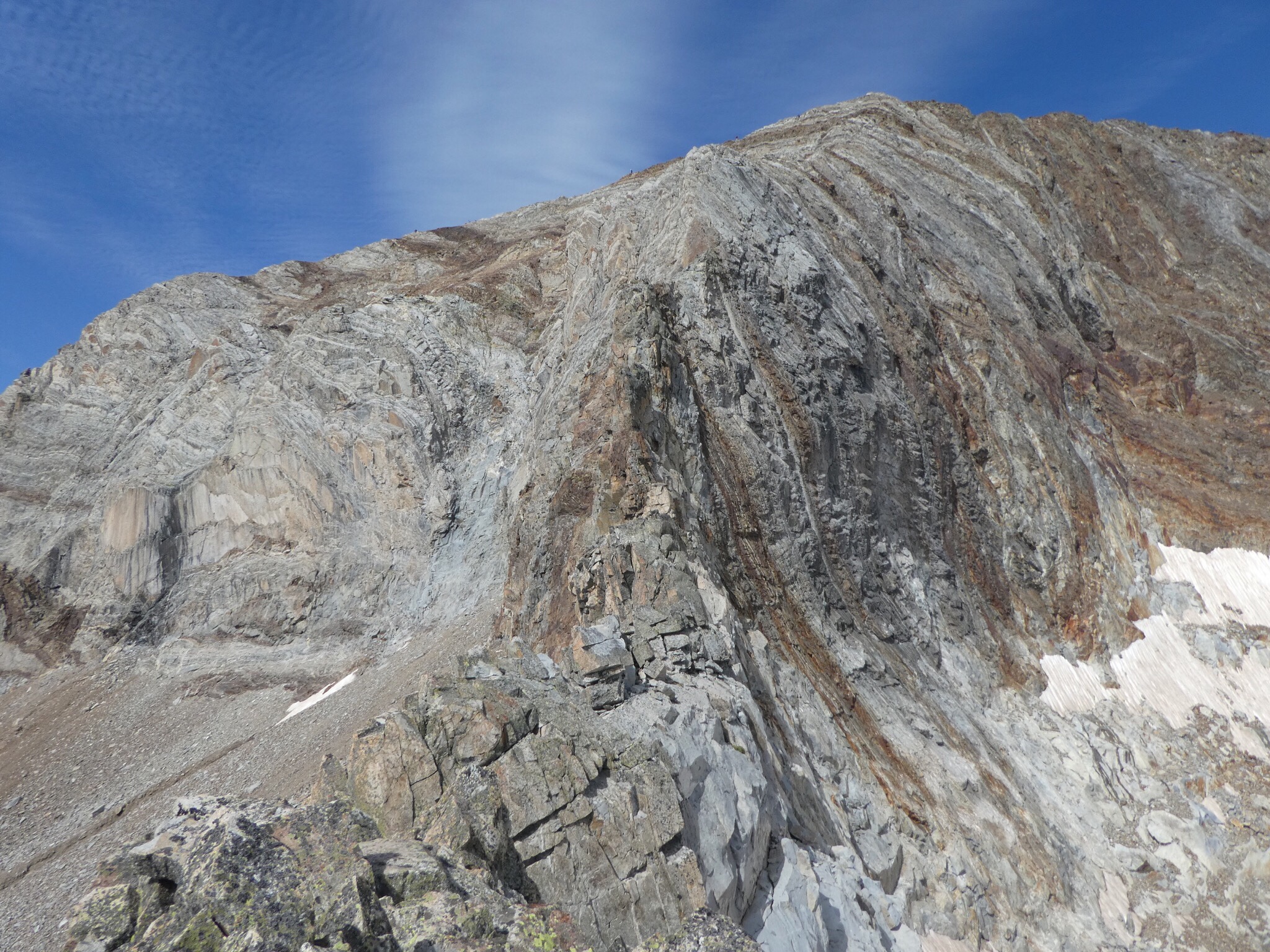 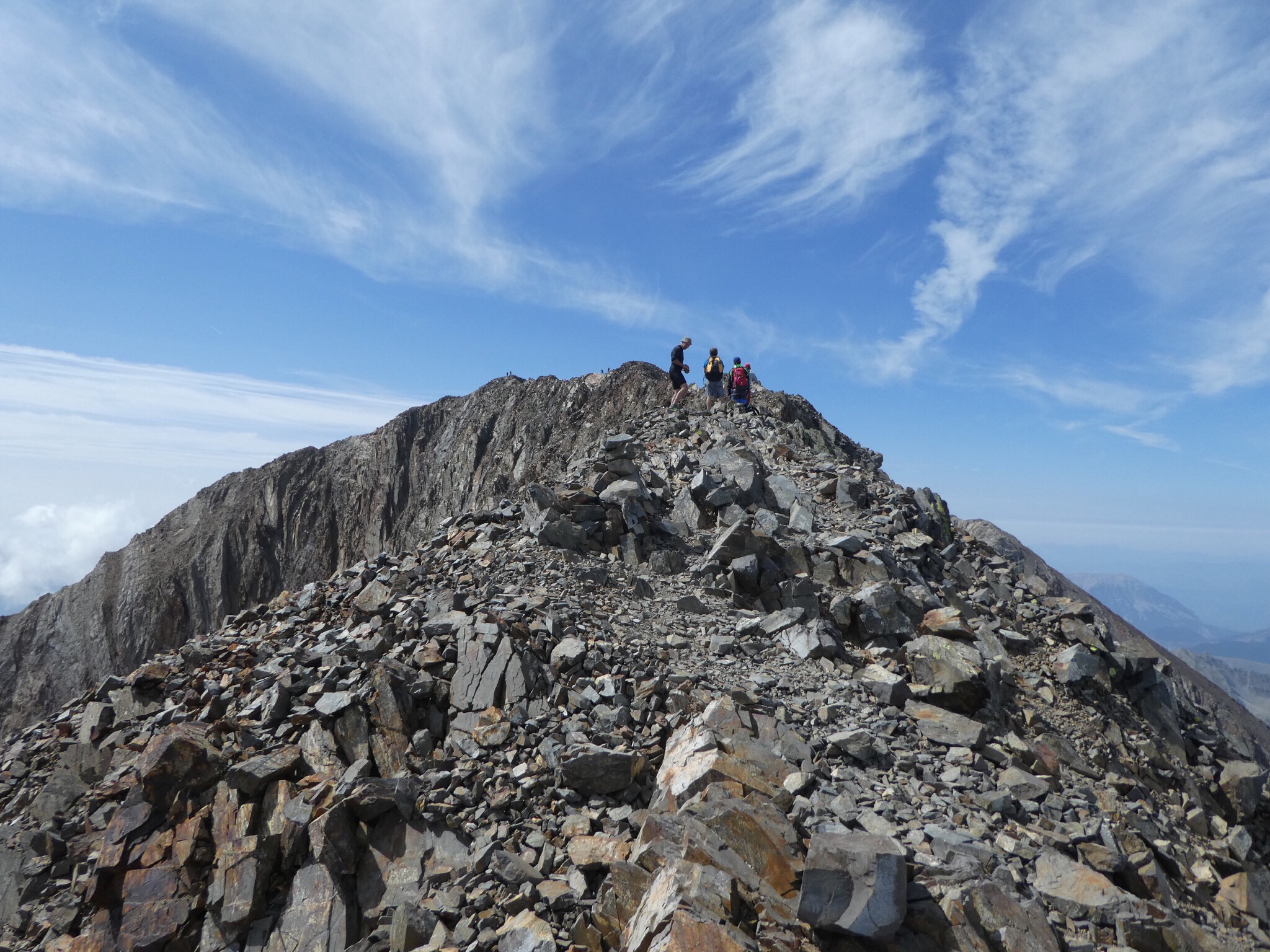 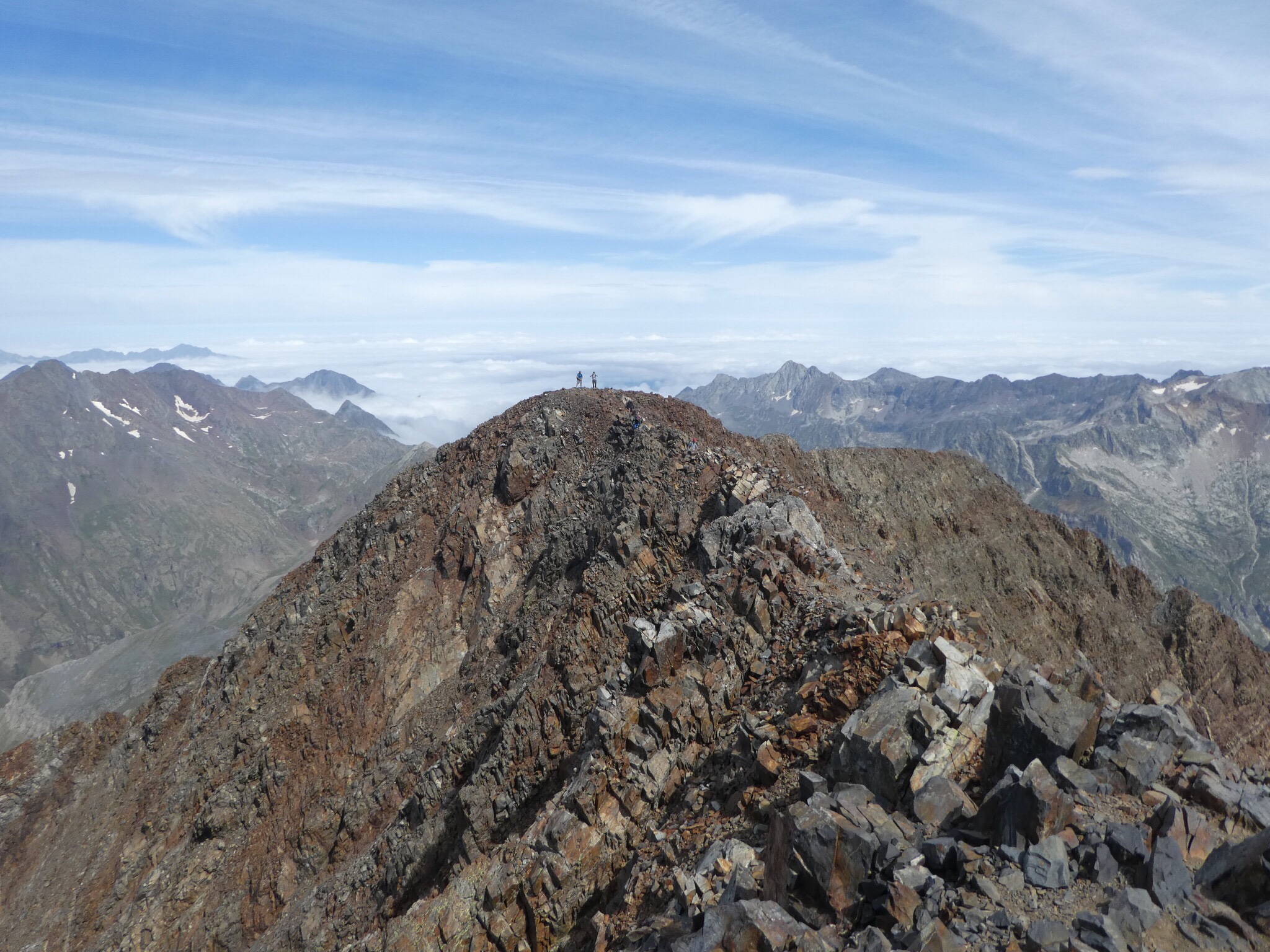 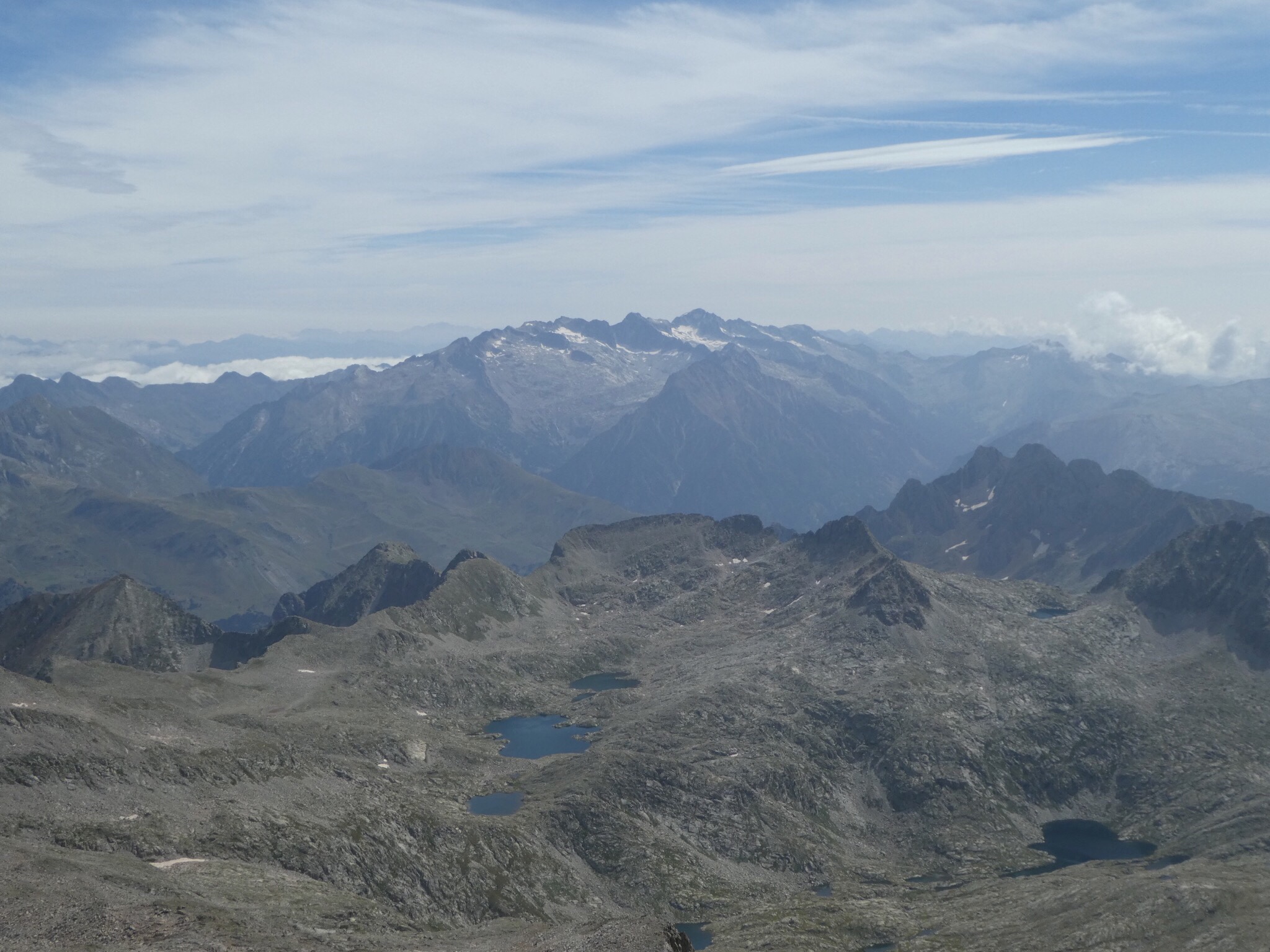 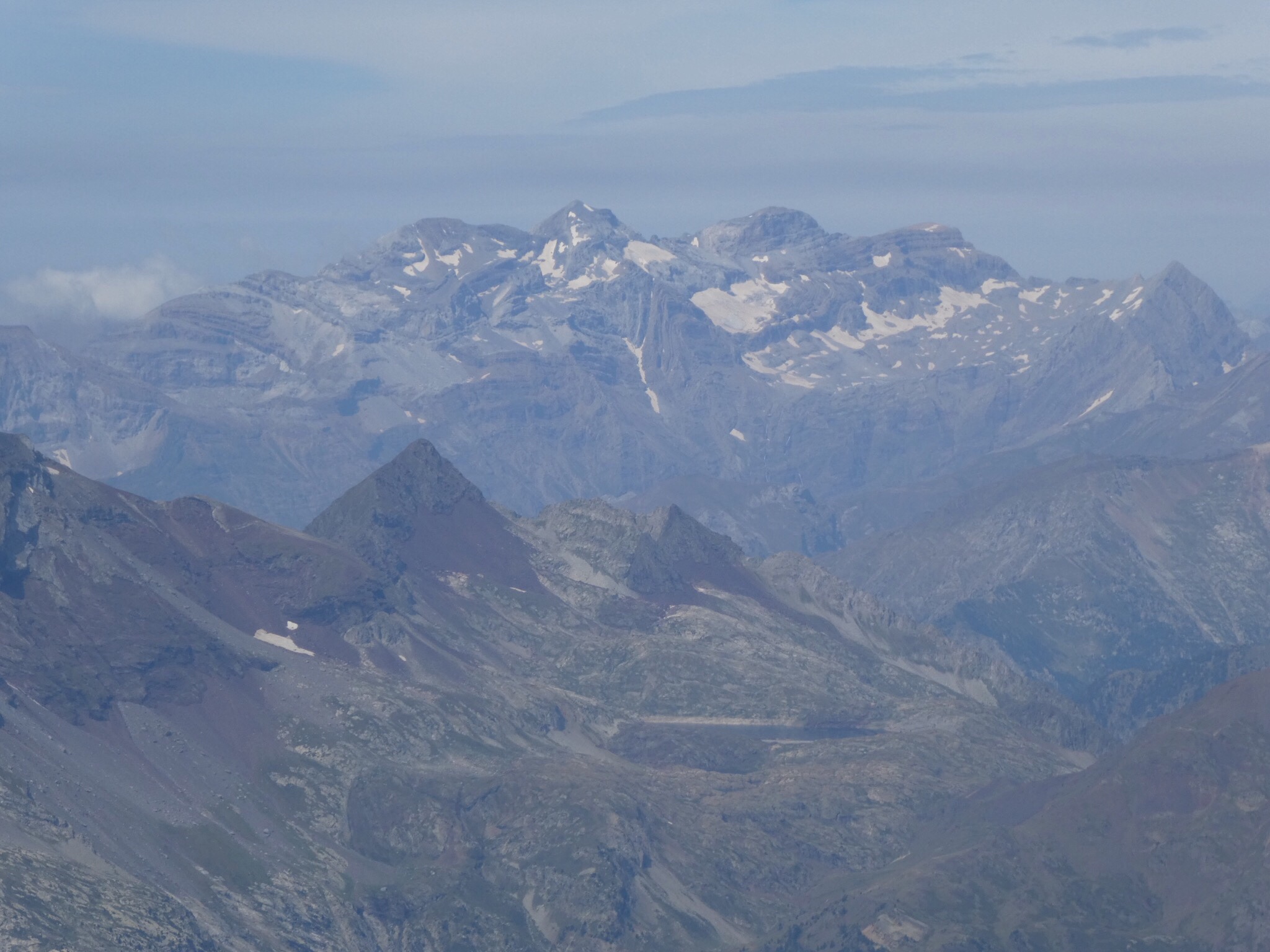 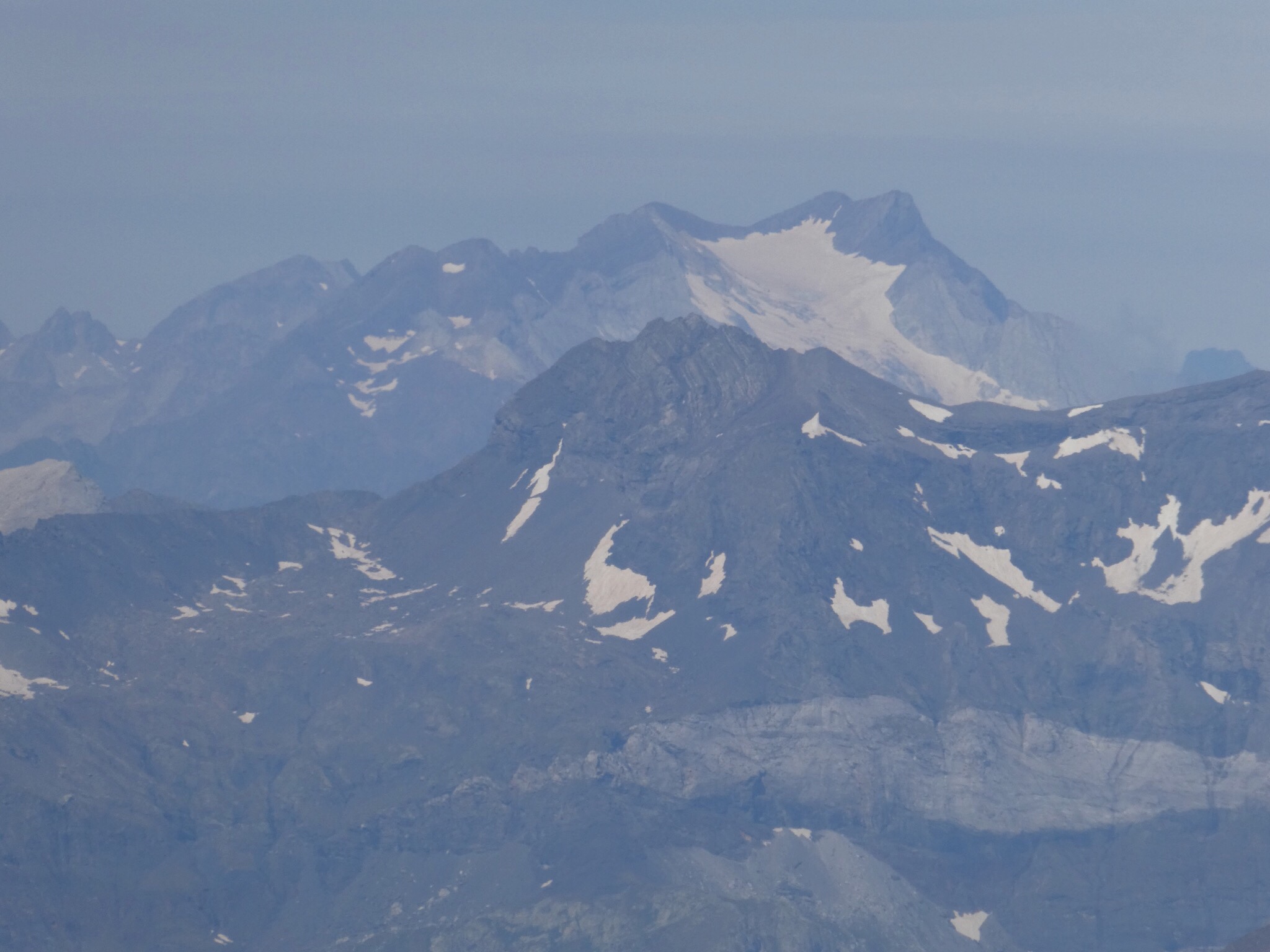 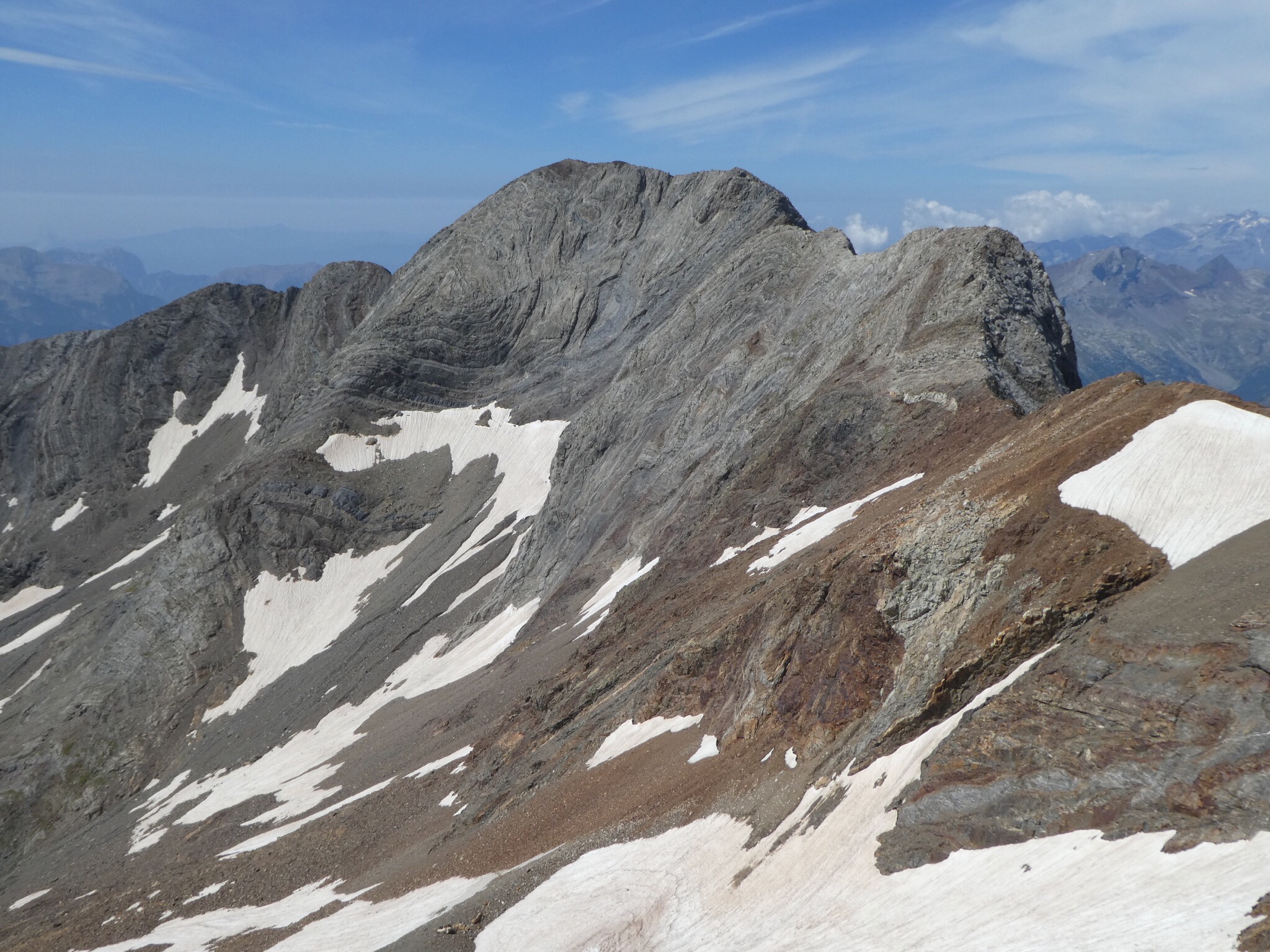 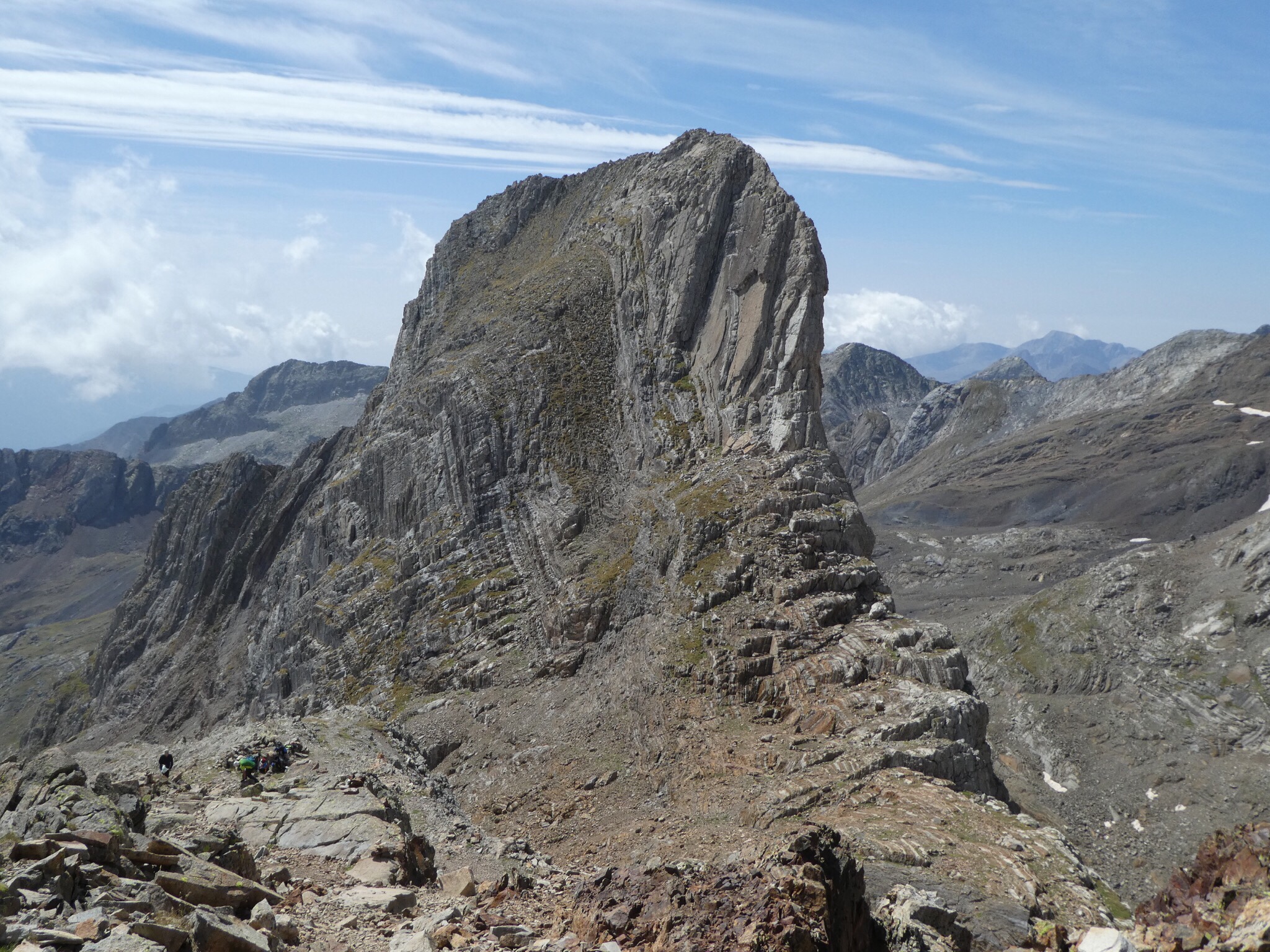 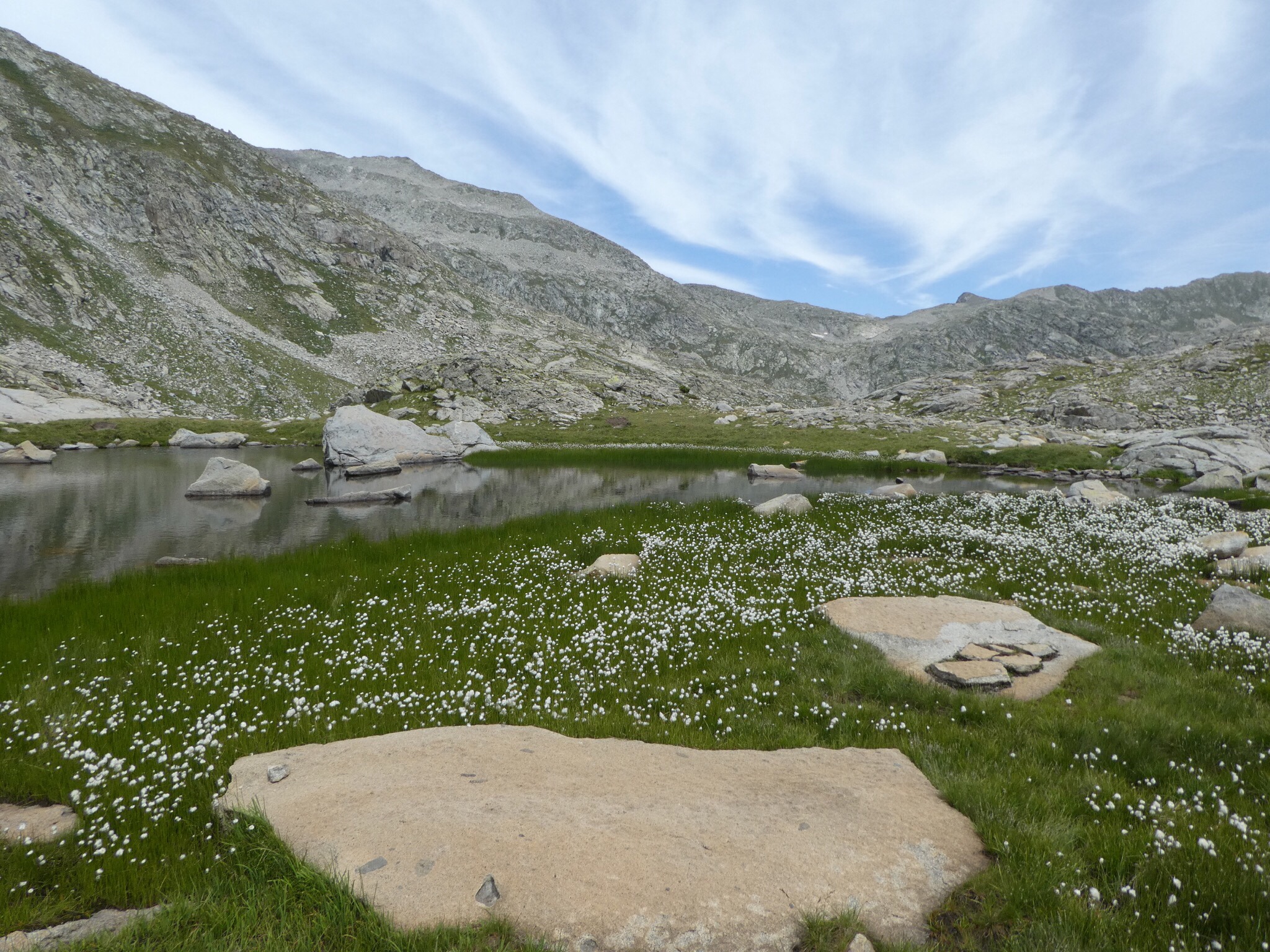 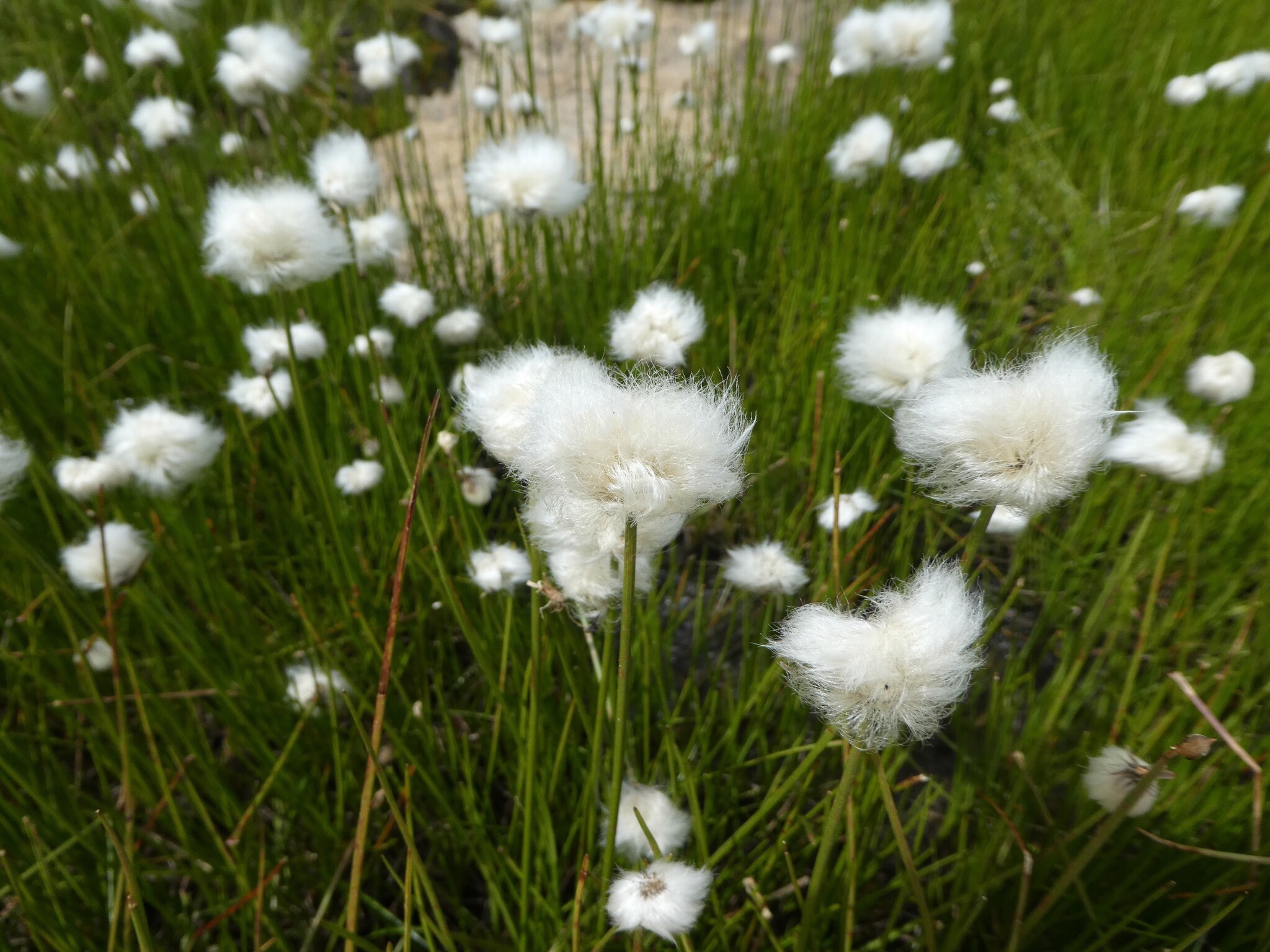