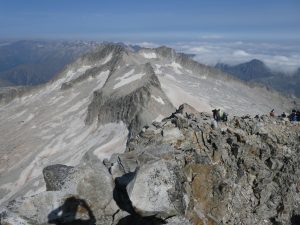 Aneto, the highpoint of the Pyrenees, resides in Maladeta-Posets National Park, on the border south of the western end of France. By itself, it would have been a moderate, non-technical day. However, by deciding on the spur of the moment to add in neighboring Maldito and Maladeta, I made it significantly more demanding, with some low-fifth-class shenanigans and a lot of cross-country travel. Fortunately, this part of the Pyrenees is a lot like the Sierra, with generally easy off-trail terrain above tree line.

I had taken the fast, expensive way east across France, driving 130 kph on the toll roads. On the way back, I realized that my phone can be told to avoid tolls. While this increases driving time by 20-30%, it saves not only tolls, but also quite a bit of gas, as the local roads are a bit shorter, and at 130 kph my rental is geared to be doing over 3500 RPM. It was a long, slow, but often scenic drive through the small towns of French wine country, eventually turning south somewhere near Carcassone, a small walled city surrounded by lots of sprawl. I entered Spain through some pass topped by a 5km tunnel, impatiently biding my time behind semis going 20 kph or less most of the way up, then rallied my car as best I could up the mountain road through Benasque to the Aneto trailhead, where I quickly packed my bag and tried to go to sleep. 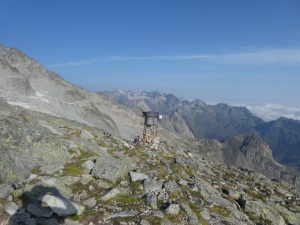 While the outdated Summitpost page said that one could drive to the refuge between 8:00 PM and 8:00 AM, this is no longer true, so I started hiking up the road around 6:45, which is now the end of headlamp time this far west in the time zone. Above the lower refuge, a good and well-marked trail leads to the upper one, beyond which the route is a chaos of crossing trails and cairns, with occasional paint dots. I followed the most promising ones, eventually reaching some sort of weather station. 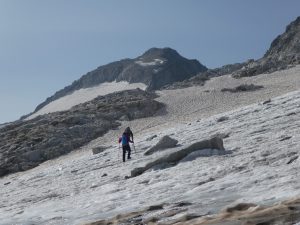 I continued thoughtlessly up the ridge for a couple hundred yards, then re-read the route description and realized I should have descended its left side at a break just below the hardware — oops! Mistake corrected, I followed more bits of trail to the glacier, where I put on crampons and followed the well-established boot-pack on a long, gradually-ascending traverse of the glacier. 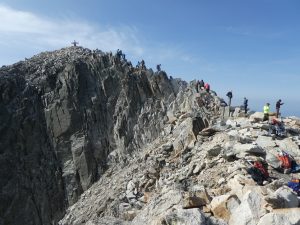 Above the glacier, I passed two piles of gear, then reached the Puente de Mahoma, a narrow third class ridge leading to the summit. There was a spectacular traffic jam in progress, with two groups of 5-6 moving short-roped in opposite directions, their guides sometimes telling clients where to put their feet or hands. I hung out and watched for 10 minutes or so, then scampered across, finding the rock trickier than it looked because it was so polished. 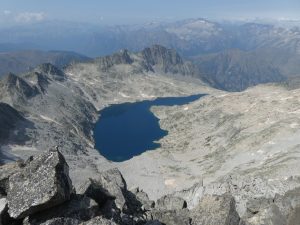 I looked around at the views, most spectacularly of the valleys and lakes to the south and west, the Ibon de Llosas and Ibon de Cregueña. (What is “ibon?” Another non-Spanish language spoken in northern Spain?) Then I found a nice seat a short distance from the crowds and sat down for lunch. There were too many people doing too much talking for the summit to be pleasant, so I did my best to tune them out. 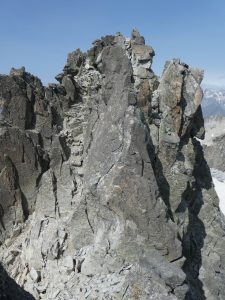 Returning the way I had come did not appeal, so I plotted a path on my map traversing to Maldito and then Maladeta, from which some sort of trail led back to the car. I dropped down to the glacier, then traversed to the saddle east of Pico del Medio, ending on a nice crescent snow arete. I was only about 200m from Pico Maldito, but things got complicated, with some intricate traversing on and left of the ridge. Fortunately, the rock remained solid, so the climb was slow but enjoyable. 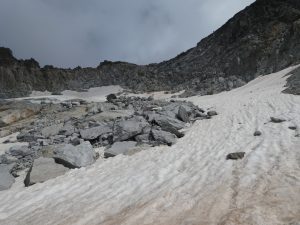 I had assumed that I could easily descend to the saddle northwest of Maldito, but this turns out not to be true. After descending the ridge to some rappel stations, I eventually found a complicated route leading down the right (north) side, then back toward the ridge just above the saddle. There is apparently no easy way to reach Maldito’s summit. Maladeta looked like it might be more of the same, and I briefly considered dropping down the glacier to rejoin my route from the way up, but the prospect of seeing some new terrain drove me to continue. Maladeta turned out to be a bit complicated, and I was not moving too quickly, but it was much easier than Maldito.

The “trails” on the Peakbagger app’s “global topos” can be all sorts of things, from old jeep roads to cross-country routes, and the “trail” off Maladeta turned out to be one of the latter. I followed the line and some cairns down a talus-field, then on a zig-zag path down some cliffs to another snowfield or glacier. I hoped to boot-ski it, but the snow in this part of the Pyrenees is remarkably hard this time of year, so I had to carefully crampon down to where it was nearly flat. I believe I saw a boat on the large Ibon de Cregueña, but can’t imagine how someone got it there. 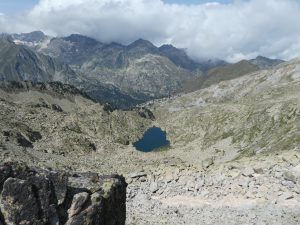 I got some water at a high lake, then continued on a descending traverse across Sierra-like slabs, grass, and stable talus. I was aiming for the Breche de Alba, a col from which I could descend past the three Ibon de Alba Lakes, then traverse back along the Rio Esera to my car. This worked as planned, though in my tired state every climb was a slog. I found a few cairns on the other side of the col, then a gradually-improving trail starting at the lowest, largest lake. This would be a nice place to camp, if camping weren’t forbidden in the park. On the steep lower trail, I passed a couple of hand-chains and three wiry Spanish trail runners hiking up. There were a surprising number of people on the traverse trail back to the Aneto parking lot; I tried not to curse the trail’s useless climbs while they were within earshot.

I got back to the car somewhat later than I had planned, but still under 12 hours, picked up a few supplies in Benasque, then drove down to the next town, where I thought I could access Posets. Once again, this bit of Summitpost beta proved out-of-date, and there is now a stupid bus system on the road up toward the refuge. This was apparently also news to a group of Spaniards, who pulled in behind me as I sat in my car near the gate, trying to find another route. With 10-20 minutes of work with the map and internet, I managed to find a longer route from a slightly lower trailhead uphill of Benasque. One more slow trip through the weekend crowds later, I pulled into a large lot, made some food, and got some sleep.

Peaks to the west