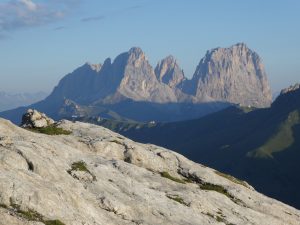 [This is way out of order, but something to do on a day with free time and decent internet. — ed.]

Gardena Pass is next to Sella Pass in what seems like the most famous section of the Dolomites among Real Climbers. Despite not being one of those, I still managed to find some things to do in the area, some more fun than others. Still, I think the place is best left to the Real Climbers. 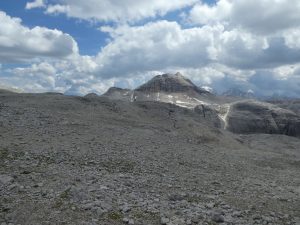 I had originally wanted to do the well-known Brigata Tridentina via ferrata. I couldn’t figure out where to rent ferrata gear in town, but figured I could just scramble it. Unfortunately, there was a big, obvious sign at the bottom saying you were not allowed on the ferrata without gear, and it is popular enough that I would no doubt run into many other people. Instead, I hiked up the walk-off, which itself has a few cable sections, but no sign. From the top of the steep trail, I continued to the Pisciadu Hut, a large and popular establishment next to a rather pathetic little lake. 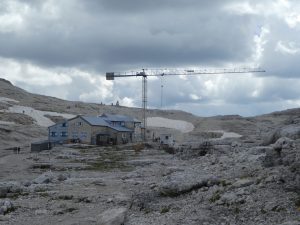 With plenty of time left in the day, I panned around the map on my phone, finding that Piz Boè was the highest thing in the area, and that there were trails leading there. I took off hiking in that direction, climbing onto a broad, rolling plateau surrounded by cliffs. Boè itself looked less than impressive, a broad cone-shaped thing with a hut on top, but I had nothing better to do with the afternoon. I set off across the plateau toward the summit, crossing one short ferrata section on my way to a large refuge at Boè’s base, which was a noisy, active construction scene.

From there, I continued on the summit path, joining the line of people who had taken a tram up to the plateau from the other side. I listened to people speaking various languages outside the ugly summit hut for awhile, then retraced my steps. Back at the car, I did some research to come up with something a bit more fun for the next day. 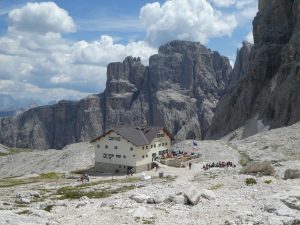 After some confusing about where to start, I got a late start up the trail to the Brigata Tridentina ferrata, which meant that there were people lined up at the base when I got there. Since I was not supposed to touch the ferrata without gear, I scrambled up some rock to its right, then thrashed through some scrub pines to rejoin it on a trail section above the first cable. Gotta play by the rules… 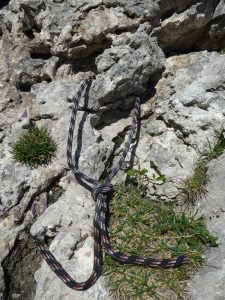 Where the ferrata turns uphill for its main section, I continued following a traversing trail to the mouth of a sort of canyon, then left it at a cairn to follow boot-prints toward the base of the buttress. Based on the Mountain Project description, I thought I would have no trouble finding the start of the route (“a well-worn start” behind an “enormous block”), or the route itself (“slung sandurhs“, or rock handles). I turned out to be wrong. After going way too far up-canyon, I gave up and headed back down next to the cliff, eventually finding a small cairn next to the wall. 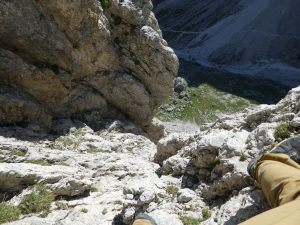 I started up and, finding a sandurh, was reassured enough to continue. The description continued to be unhelpful, so I just made my way up what felt like the best path, occasionally finding a sling here or there, but not enough for me to see the next from the previous one. Many of the slings were old, suggesting that the route is not all that popular. Unlike on the ferratas and other popular routes, the limestone was not worn smooth, so the climbing was fun, steep but moderate, on sticky rock and sharp holds. The crux was probably a steep section where I stemmed up an orange dihedral/chimney. Above, the terrain flattened out somewhat, and the rest was class 3-4 cruising up grass and limestone steps.

I found a faint climbers’ trail at the top, leading to the good old Pisciadu Hut. As I hiked, I watched the line of people crossing the bridge at the top of the ferrata. I once again had some time, so I skipped the hut and followed a trail to the top of the Cima Pisciadu, a minor summit across the plateau from Piz Boè. While it did not have a hut on top, it did have a cross and some communication equipment, somewhat spoiling the ambiance. I checked out the nearby peaks for awhile, including the nearby inaccessible-looking Dent de Mezdi, then returned once again to the hut and down the ferrata walk-off, passing some backpackers terrified of the steep scree-trail.

Pillars off the plateau