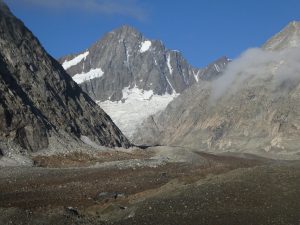 The Finsteraarhorn is the highest peak in the Bernese Alps, which contain many of the range’s largest glaciers, including the Grosser Aletschgletcher, as well as the famous Eiger (one of a handful of Alpine peaks falling between 13,000 feet and 4000 meters). Unlike the Eiger and its neighbors, which can be easily reached by those willing to pay for the cable car from Grindelwald to the Jungfraujoch, the Finsteraarhorn is a long glacier hike from any access point. I chose to come in from the high trailhead at Grimsel Pass, circling around the south side of the peak to reach the hut and standard route. This took about 14h30, about nine hours of which was spent on various glaciers. From the Oberaarsee, the route climbs the Oberaar Glacier to a glacier pass with a hut, then descends the Studer Glacier to its junction with the long Fiescher Glacier, finally climbing that to reach the hut. 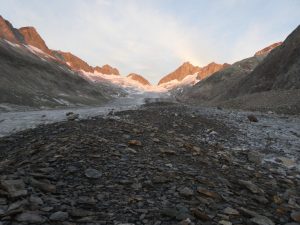 I started out up the road to the Oberaar Reservoir at 4:30, jogging some flatter spots to hopefully cover as many miles as I could on decent snow. Reaching the dam, I realized that I could have paid 5 Francs to park at a large overnight lot nearby. I put away my headlamp on the way across the dam, then followed a clear trail along the reservoir toward the toe of the Oberaar Glacier. Something about glaciers’ shape often makes them appear shorter than they are, and this one was no exception: though it looks small, it rises nearly 3000 feet to the col, and takes just as long as one would expect to climb. Also, flowing eastward, its tongue is highly asymmetric, with the shaded southern side extending much lower than the northern one, mostly covered in talus. 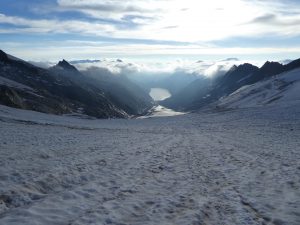 I made my way up the rocky northern side for awhile then put on crampons to make my way up the bare ice, winding around and jumping over the exposed crevasses. There was still snow covering the glacier’s upper reaches, but fortunately there was a boot-pack drawing a safe line over and around the more hidden slots. I saw two people at the base of the path leading up to the small hut, but they did not seem talkative, so I continued over the other side, following another bootpack down the Studer Glacier. On the way down, I got a good view of the southeast, i.e. wrong, side of the Finsteraarhorn, and a sobering reminder of how far I had to go. 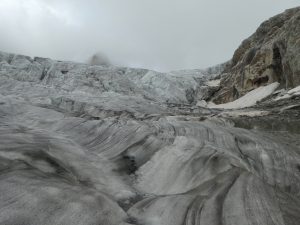 This bootpack seemed to be contouring farther south than I would like, so I left it near where the glacier became bare to take a more direct line to the junction with the Fiescher Glacier. This turned out to be a mistake: the lower Studer Glacier branches around a rock island, and the right (north) branch is steeper and more broken, while the left is an easy walk. There were some hijinks required, including going in and out of the moat on the left, but I eventually got back on track. 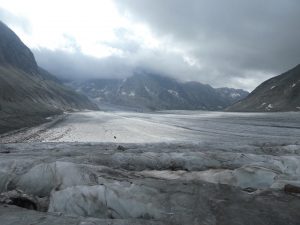 I saw a few boot-prints crossing the large rib of debris to the Fiescher Glacier, and was then back on bare ice for awhile, dodging the many crevasses and looking for an easy line up toward the hut. It is difficult to mark routes on glaciers, and boot-packs do not form on bare ice, so each person has to find his own way. In any case, I saw no other people after the Oberaarjoch Hut, a surprising change from the rest of my time in the Alps, and it felt particularly lonely on the big, quiet glaciers. 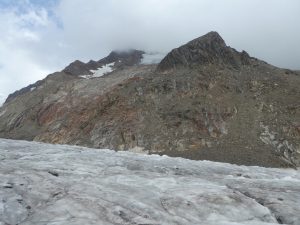 After endless glacier shenanigans, I spied the hut far up on the right bank. I had been planning to do another peak, and had forgotten to take photos of the guidebook, so I mistakenly thought that the route went up a glacier tongue from the Fiescher Glacier to the Hugisattel. Unlike on my map, this tongue does not connect to the main ice, and the route in fact climbs the rubble above the hut to reach it higher up. The weather was gray, but not truly threatening, and I had come a long ways, so I decided to try to figure something out for myself. 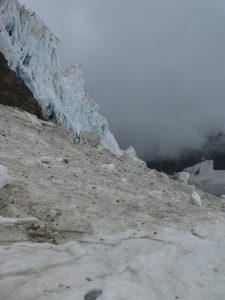 I continued up-glacier, then turned up a side branch toward the saddle between the Agassizhorn and Finsteraarhorn, hoping to find boot-prints. I unfortunately did not, and as I got higher, the glacier became snow-covered and crevassed. I proceeded carefully, climbing the right side under some seracs, which had filled in or bridged a lot of the holes, but did not currently seem to be active. I eventually crossed a ‘schrund around 3750m, then hacked my way up a bit of bare ice to the awful rock of the ridge. I found a sling around a block, but this was clearly a seldom-visited spot. 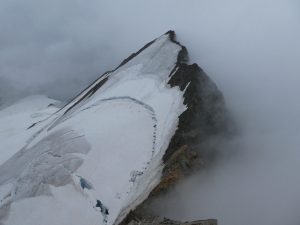 The clouds had lowered by now, so I made my way up the ridge in mist, climbing class 3-4 garbage, staying close to the crest where it was a bit more solid. I was not looking forward to reversing this, and hoped that I would find a boot-pack on the correct route at the Hugisattel. I crossed one small snow-saddle, then, after passing a decent-sized toilet paper deposit (that’s a thing in the Alps, even in Switzerland), saw recent crampon tracks where I hoped to find them. 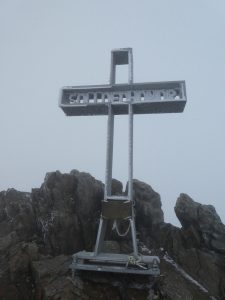 The rock to the summit was actually decent, with plenty of crampon scratches and bits of trail here and there. I climbed as fast as my fatigue allowed, since the weather seemed to be worsening. Reaching the summit just as it started to graupel, I stuck around just long enough to put on my windbreaker and take a photo of the cross, then raced back down in full GTFO mode. I needed to get to that crampon track before it was buried. 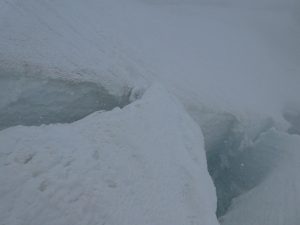 Back at the saddle, I swapped out my soaked fleece gloves for mitts, put on my crampons, and started jogging down the boot-pack while annoying ice pellets stung my eyes. It dodged a number of crevasses, crossed a narrow and sketchy ice-bridge, then disappeared on some bare ice as it seemed to traverse to the rock on the left. I followed where I thought it might lead, and soon found a pile of historic garbage (rusted cans and broken glass), and a decent trail leading down the scree. I continued on the trail for awhile, eventually losing it at a flat spot. I believe the route goes left onto another glacier, but I carefully made my way down some horrid talus, then slid down a scree-chute to more talus and snow below. 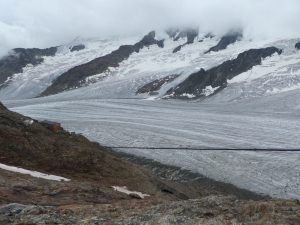 I passed just below the hut, and almost stopped in to check it out, but it looked like there might be no one home, and doing so would require going uphill. Instead, I stopped for a snack on the edge of the glacier, then began the long walk home. It had stopped precipitating, and the weather seemed to be either stable or slightly improving. Going up the Studer Glacier, I even caught glimpses of some summits to the west. I slogged past the hut, where two people watched me silently from the balcony, then continued down the Oberaar Glacier toward home.

I felt a few raindrops as I neared the reservoir, where I saw a young couple out with a baby, and a party of three other dayhikers. The rain picked up about halfway around the reservoir, so I put on my poncho, immediately tearing an ice-axe hole. This was the first time I had used both on a single outing, and I clearly should have thought more carefully about how they would interact. The rain continued as I crossed the dam, passed the Oberaar Berghaus, and started down the road to the pass. I hoped to get a ride with someone headed down, but the one car that passed did not slow down. Fortunately the rain had mostly stopped, so I could put away the poncho and jog back to the car. I had grown a bit complacent, and the Bernese Alps smacked me for it. I have a few more similar outings planned, which I will take more seriously. 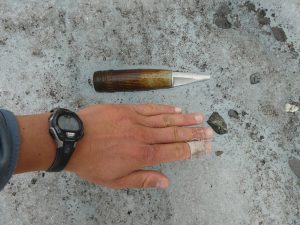 PS — I saw dozens of shells embedded in the glacier, slightly smaller than my hand, which seem like they might have been fired at or by an airplane. Does anyone know what they are, or why they are all over a Swiss glacier? Does the Swiss Air Force practice by strafing the Bernese Alps?