Having driven all the way over to Alagna, I figured I might as well spend some time in the area, checking out some of its lesser peaks. Alagna and its neighboring villages are inhabited by the Walser people, who live in the high valleys of the area and (I believe) speak their own dialect of German. One unique and immediately noticeable bit of “Walserity” is the style of their houses, which have the slate roofs of the ones I saw on the Swiss side, but also outward-sloping wooden trellises supporting their eaves. I probably should have taken the time to visit the local Walser museum, but my time in the Alps grows short.

I slept in after the Monte Rosa expedition, then did some writing and tooled around town for the rest of the morning, buying a few groceries and scoring free WiFi at the tourist information center. I was planning to take the day off completely, but started getting antsy around noon, so I decided to take an afternoon hike up Cima Tagliaferro (“iron-cutter,” I believe), a handsome and easy peak on the east side of the valley. It probably has an excellent view of Monte Rosa on a clear day, but those seem to be rare.

The trail up from above Alagna is nicely shaded, but it was still punishingly hot and humid as I climbed out of the valley past a number of traditional slate-roofed huts. The trail emerges from the trees a short hike below a popular-looking restaurant which is unfortunately in the middle of a cow pasture. Above, it deteriorates on its way to a pass, climbing through a mixture of greenery that I was once again reminded includes nettles.

From the first pass, an exposed trail climbs along the west side of the ridge, with a couple of fixed ropes, to the higher Passo del Gatto (Cat’s Pass), where it joins a supposedly less-exposed trail from Rima, a village in the next valley to the east. Above, it is a straightforward hike to the summit. I had passed several hikers on their way down, and met three climbers on the summit, who had just finished the north ridge, a moderate route I should probably have tried to scramble. I admired the mostly-cloudy views for awhile, then hiked back to the car, much more nettle-aware than on the way up.

Corno Bianco is the highest peak on the west side of the Valsesia. There is a sort-of trail up its south side, while its north ridge is (according to Summit Post) rated AD+ III+, the same as the Liongrat on the Matterhorn. It is actually nowhere near that hard, but was still a delightful ridge scramble with a few fifth class moves.

I hiked down through town at dawn, then wandered around a bit until I found trail number 3, which leads to both the south-side route and to the Passo Uomo Storto (Crippled Man Pass), the start of the north ridge. The ridge climbs a bit less than 500m in over a kilometer, so it is mostly not steep, and fortunately the less-steep parts are fast, rather than requiring intricate traversing. The rock is generally good, with stable talus on the flatter sections, and positive holds on the steeper steps. On the first part of ridge, the best route stays on or just right of the crest.

I was cruising along, surprised not to find any real difficulties, periodically checking my progress on my map since the clouds streaming off the east face obscured my view of the ridge ahead. I eventually reached a northern false summit, where the rock quality deteriorated, and from which I saw what looked like some tricky towers in the mist ahead. Surprisingly, they turned out to be no more than fourth class via blocky terrain on the left. I sat around on the summit for awhile, catching occasional glimpses of nearby terrain through the mist, then began finding my way down the trail.

Checking my map, I realized that “the trail” was actually leading to the next valley west, so I traversed east, partly trying to remember the route description from Summit Post, and partly taking the most natural line toward the trail at Laghi Tailly. I eventually picked out the markers for “trail” 3a, and followed these down toward the lakes. The route is blocked by a steep step at the end of a hanging valley. Here there was a 40-foot fixed cable hanging over a steeper part of the step, which would be difficult to descend hand-over-hand, and would not stop a fall using via ferrata gear. It seemed easier to downclimb the third class rock to its right.

Below, I descended some wretchedly slick grass to the lakes, where I picked up a gradually-appearing trail. This trail eventually became an old road, then rejoined my trail from the way up just above town. I stopped to wash my face and get a drink at one of the public fountains — a nice feature of many Alpine areas, especially prevalent in Italy — then hiked back up the road to the car. Alagna had been nice, but it was time to get back to business. 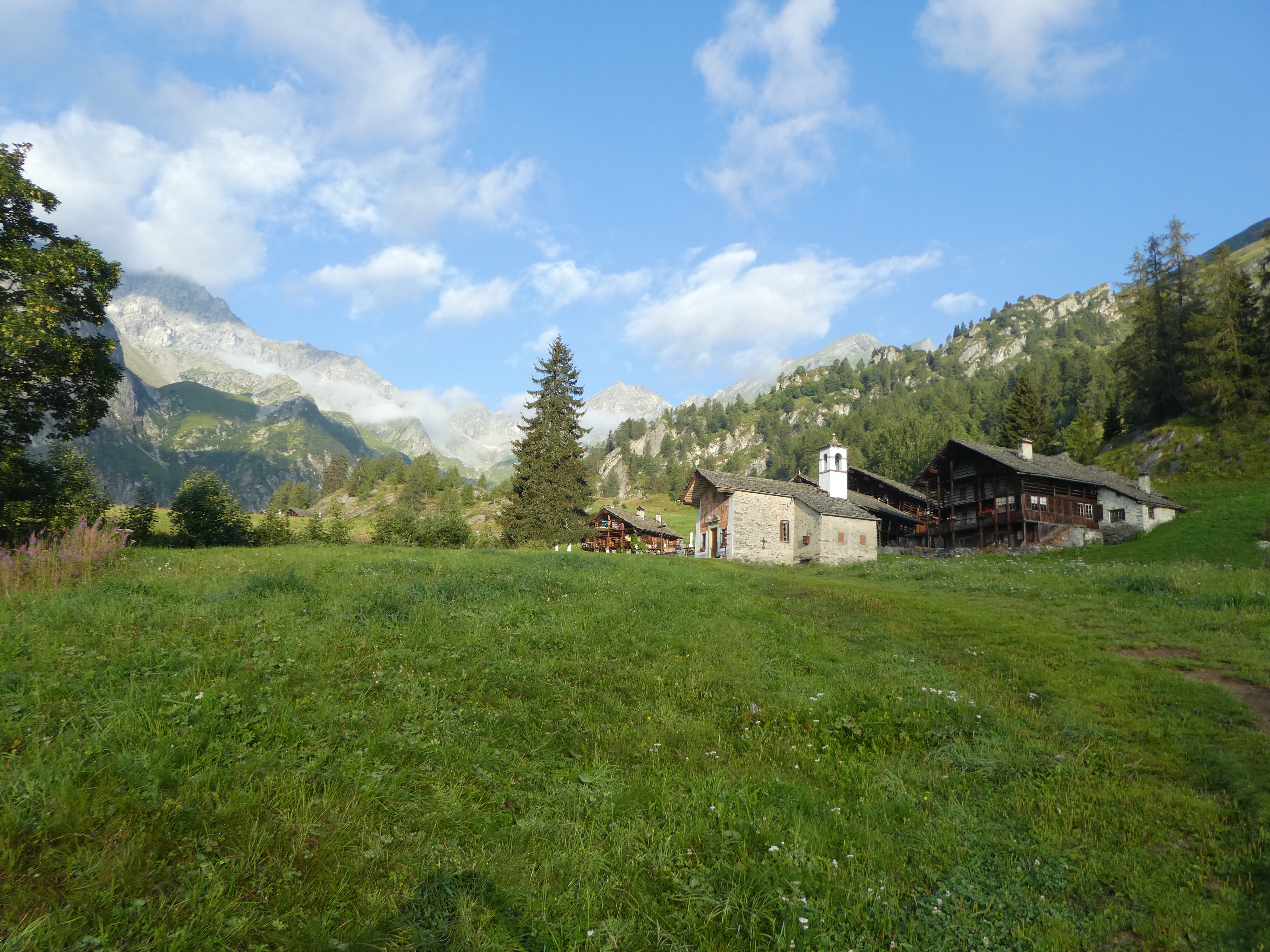 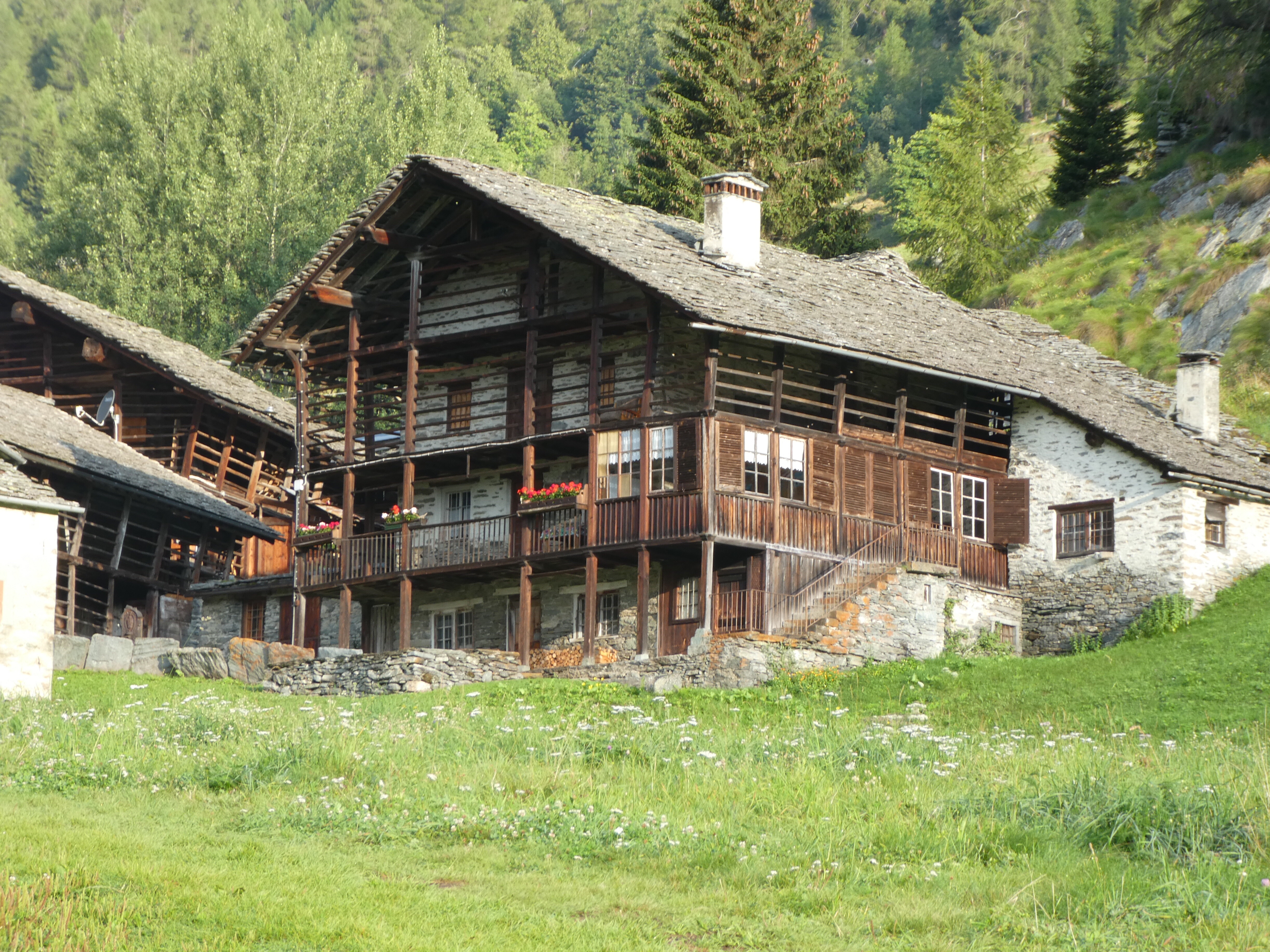 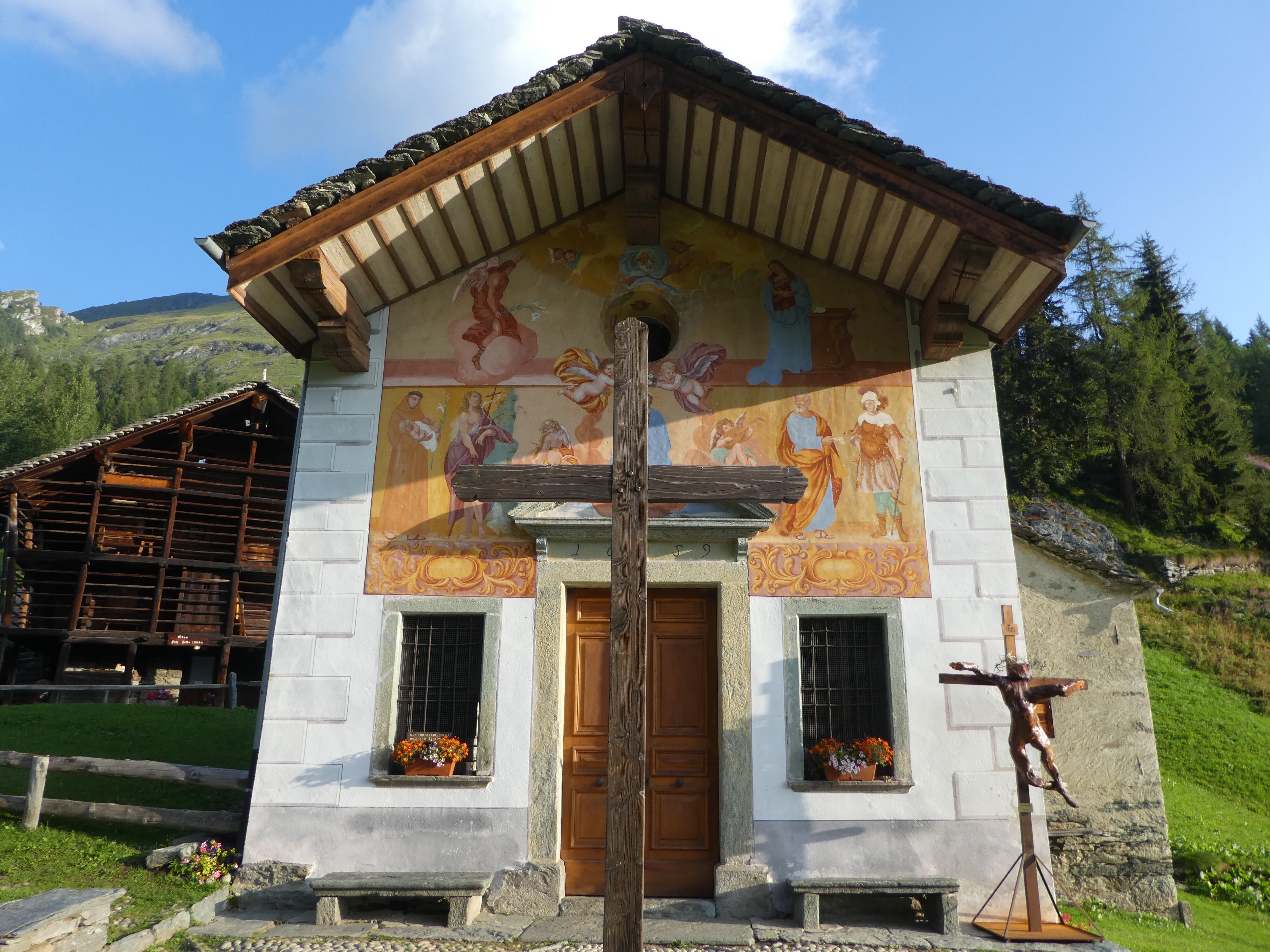 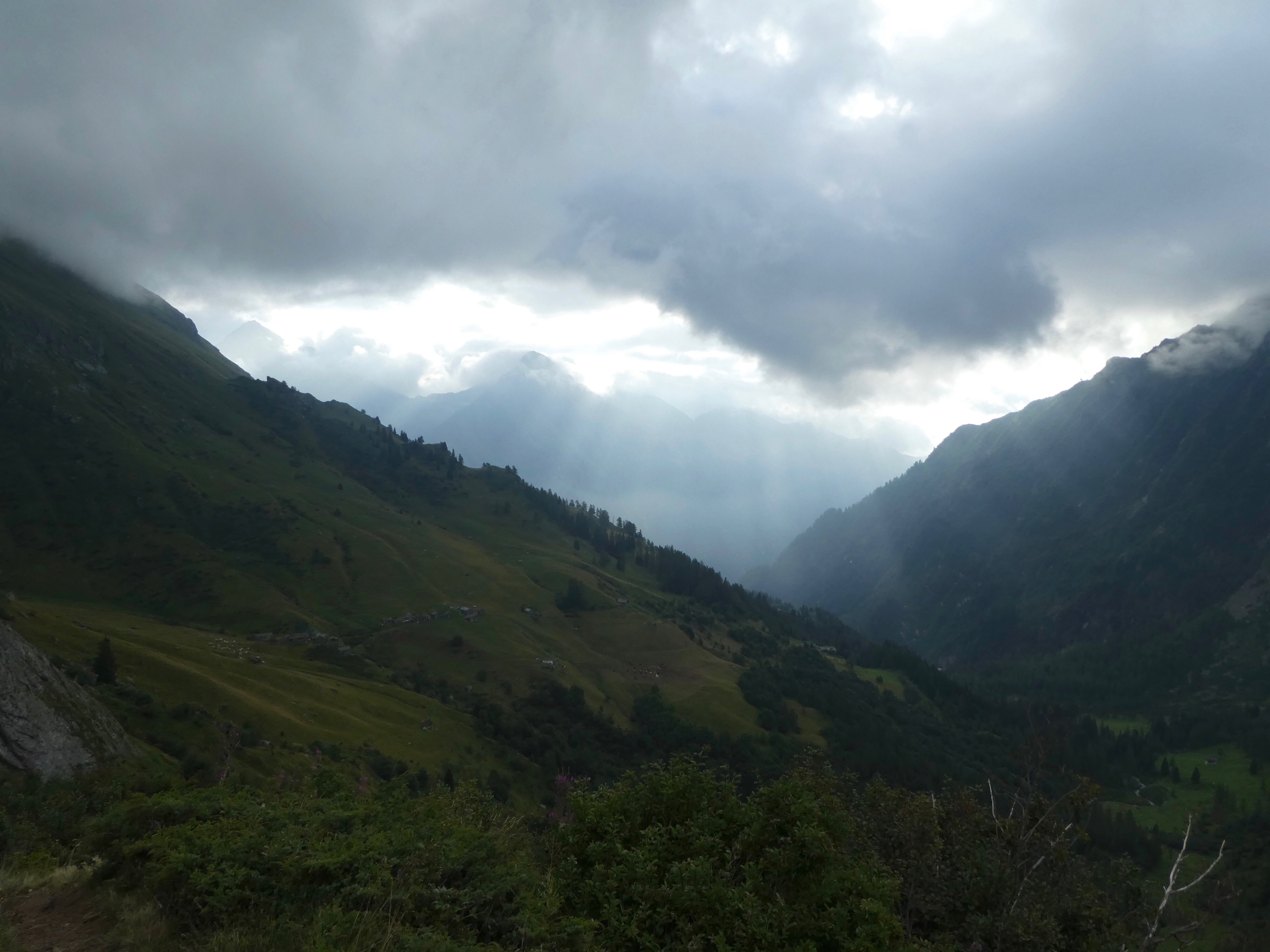 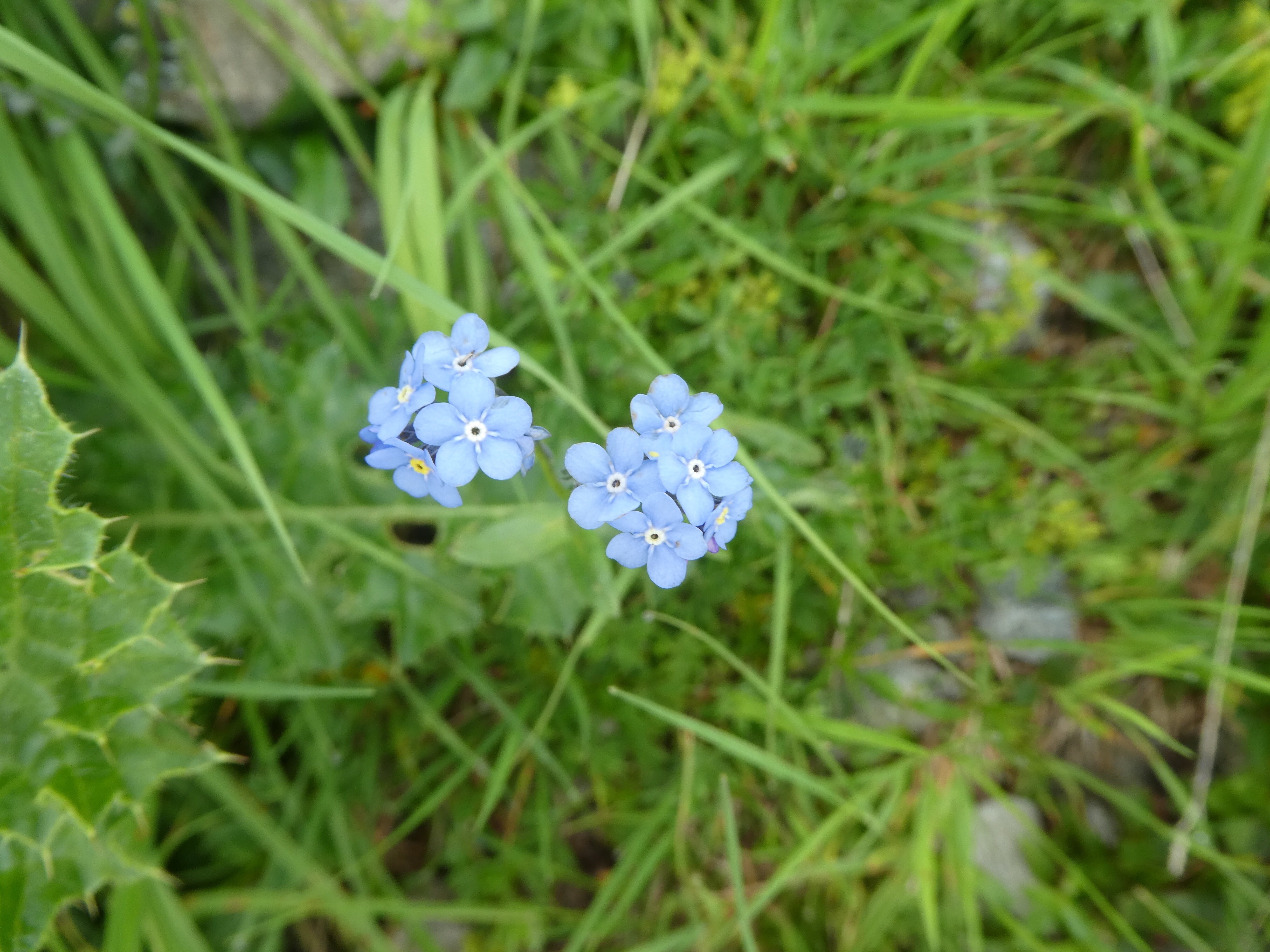 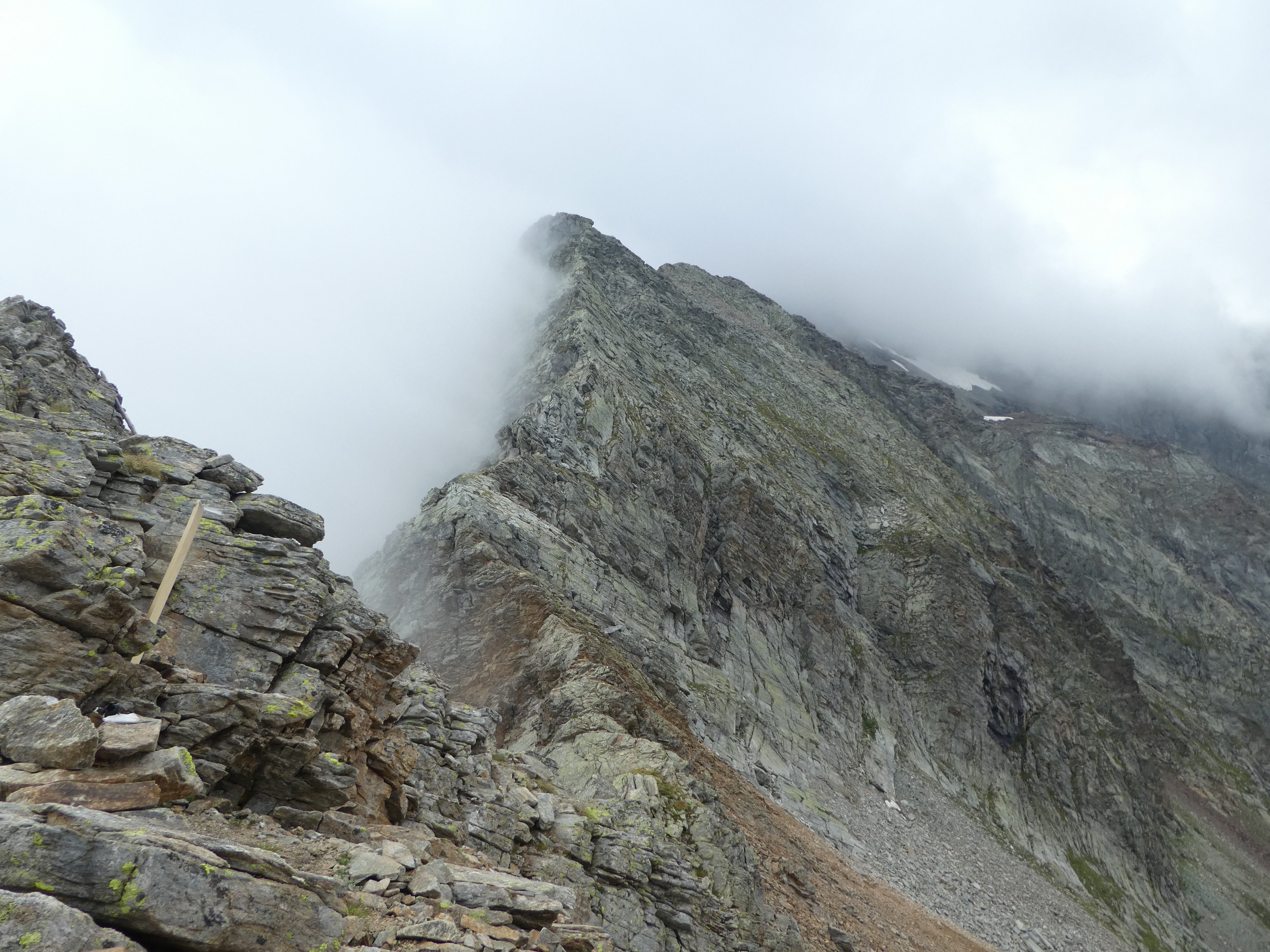 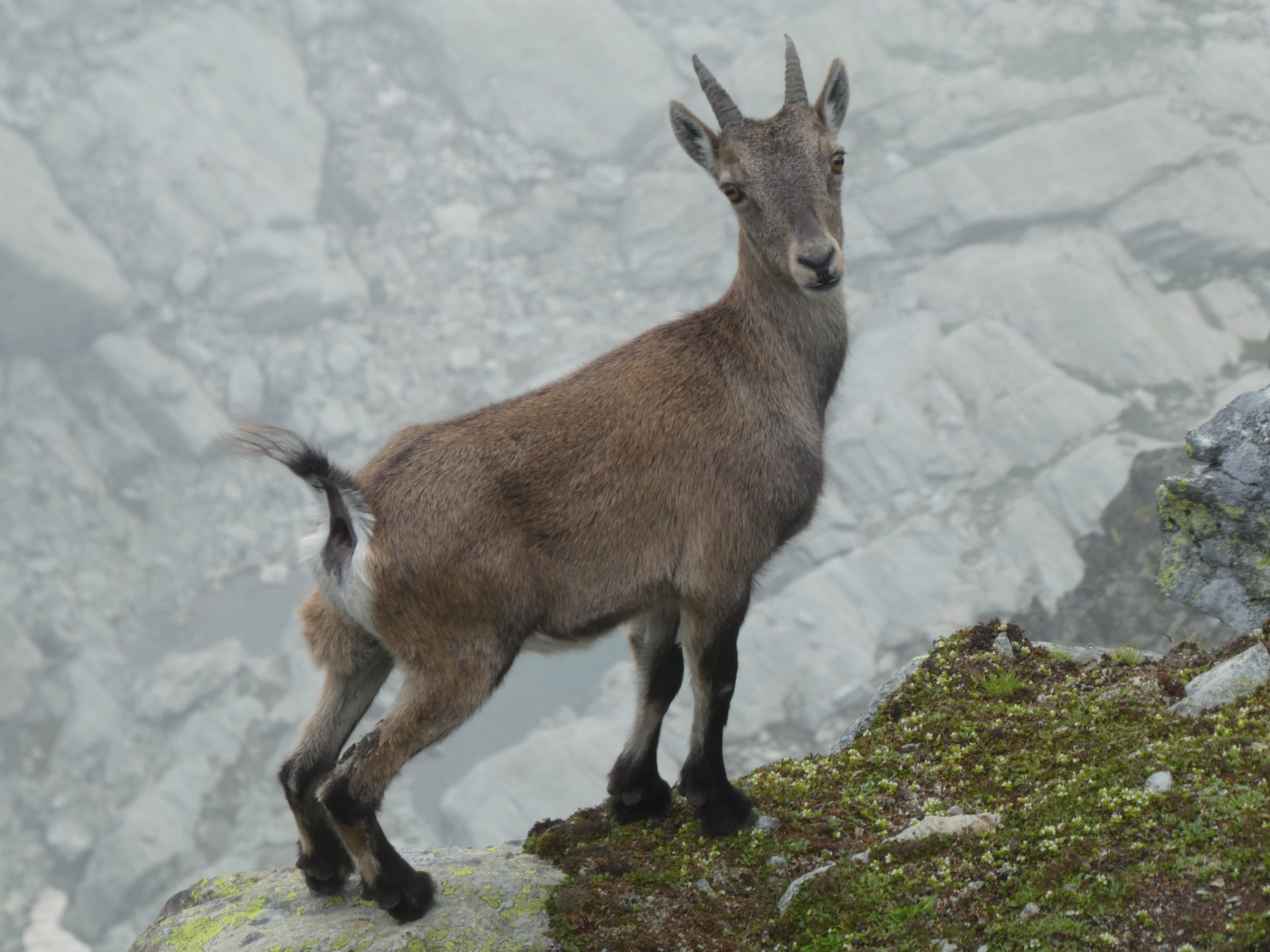 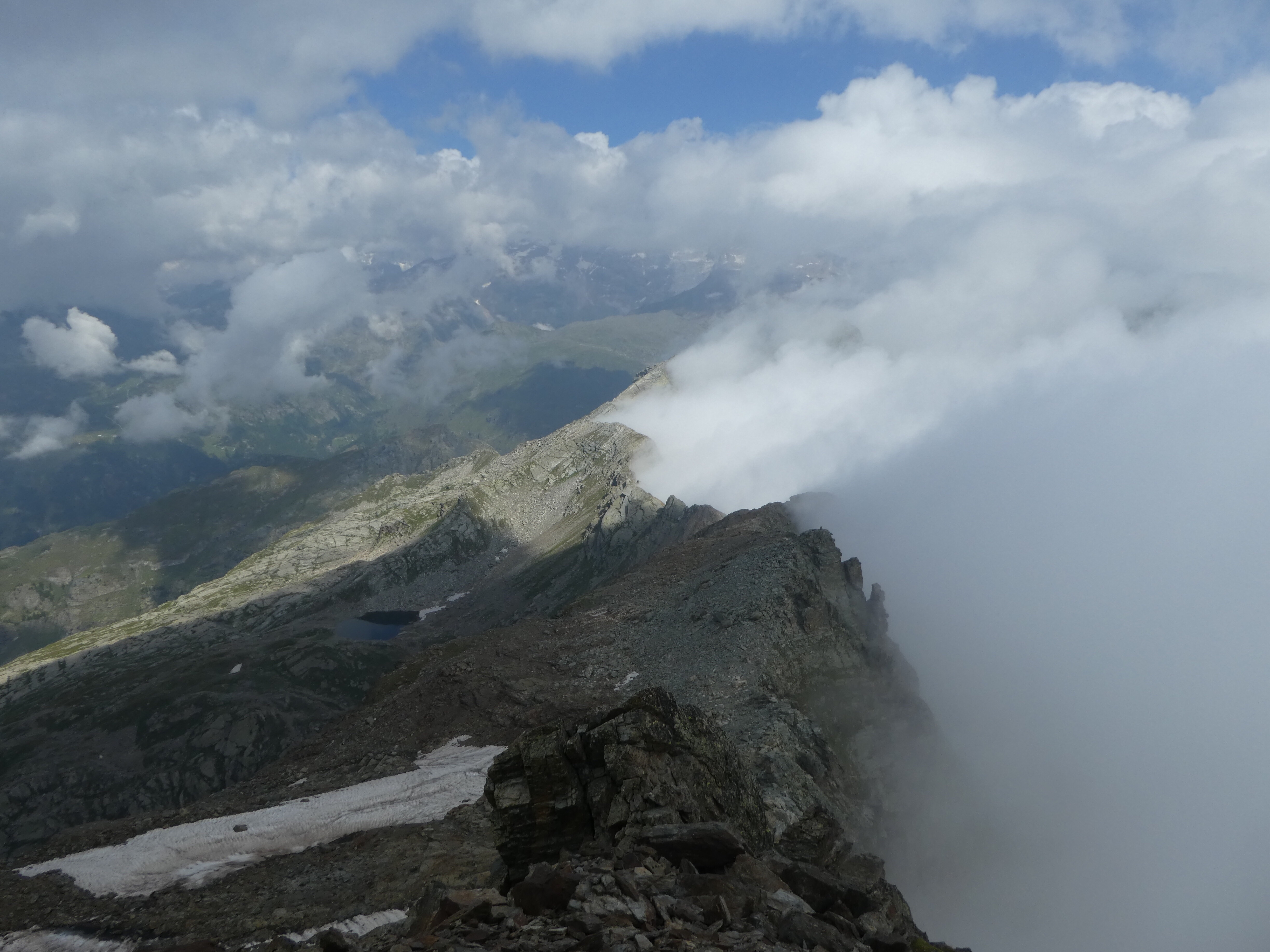 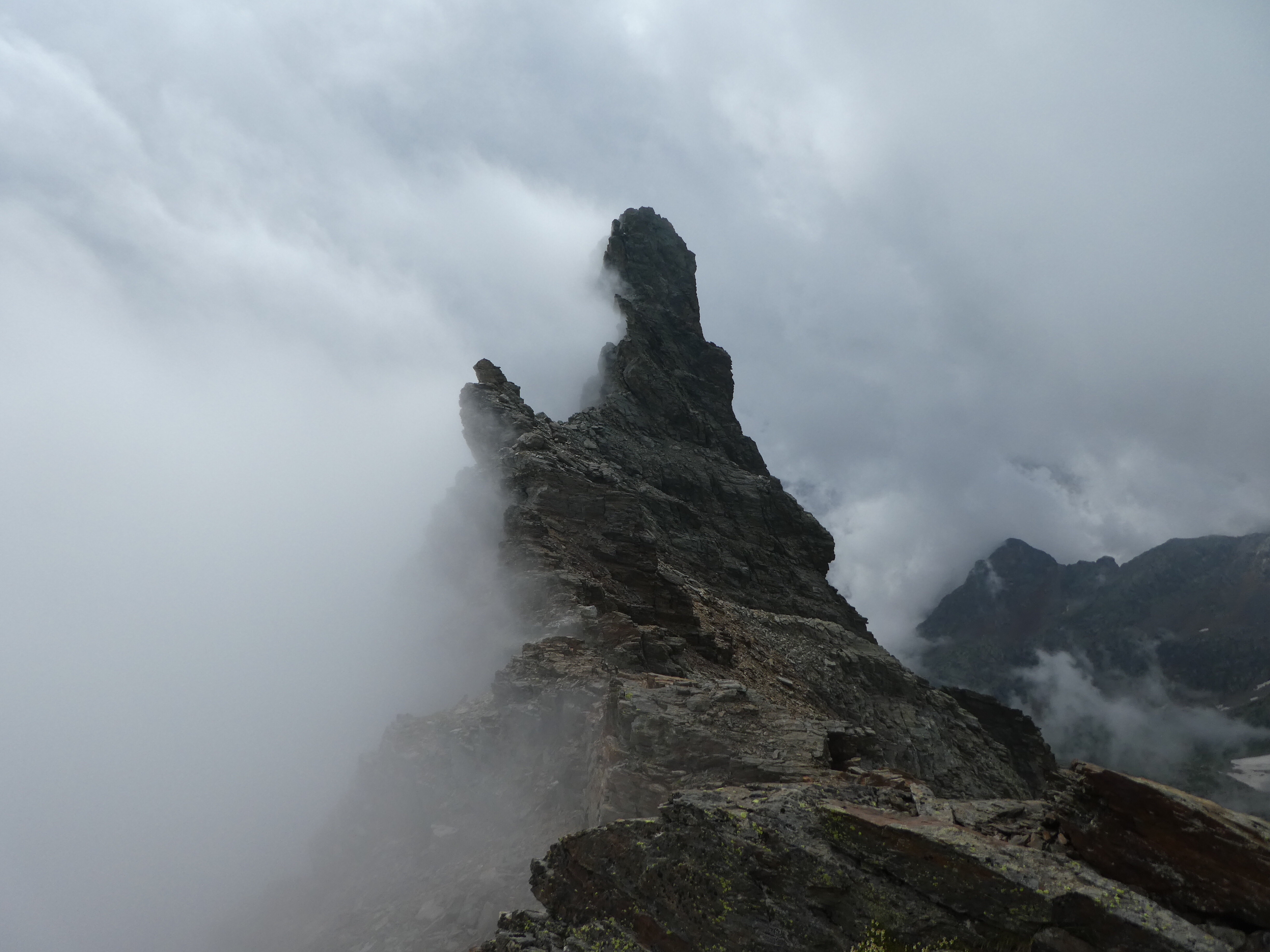 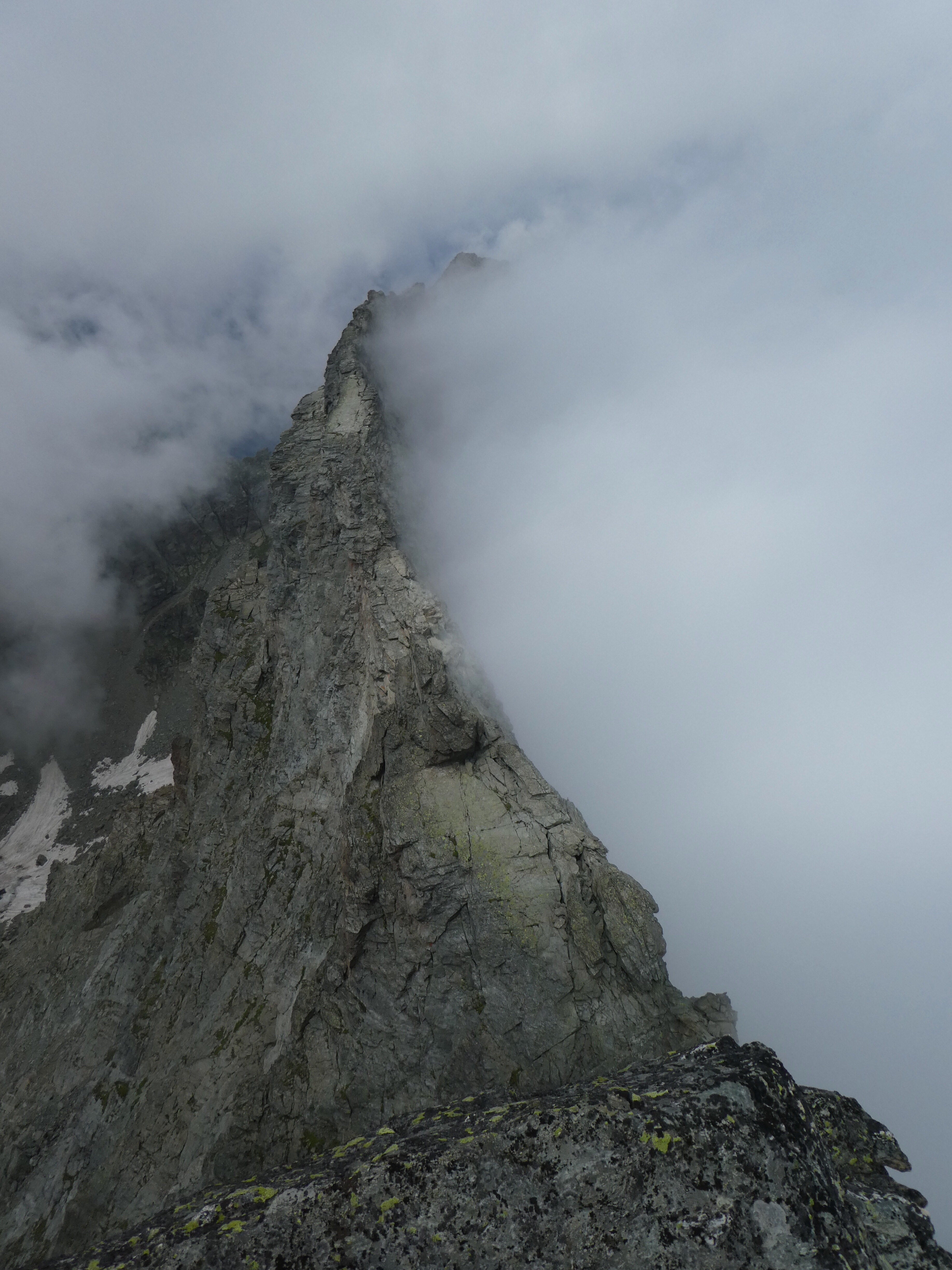 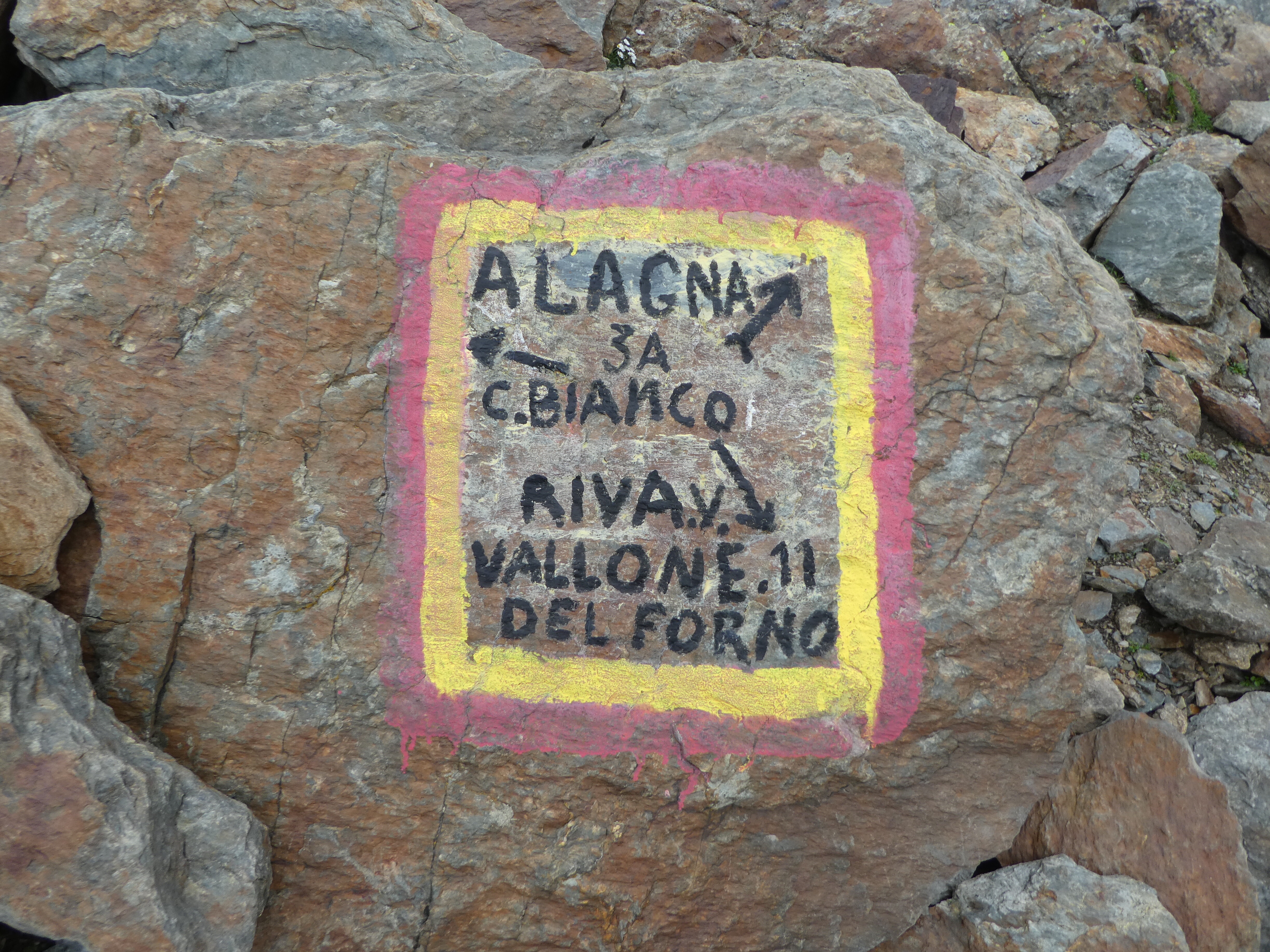 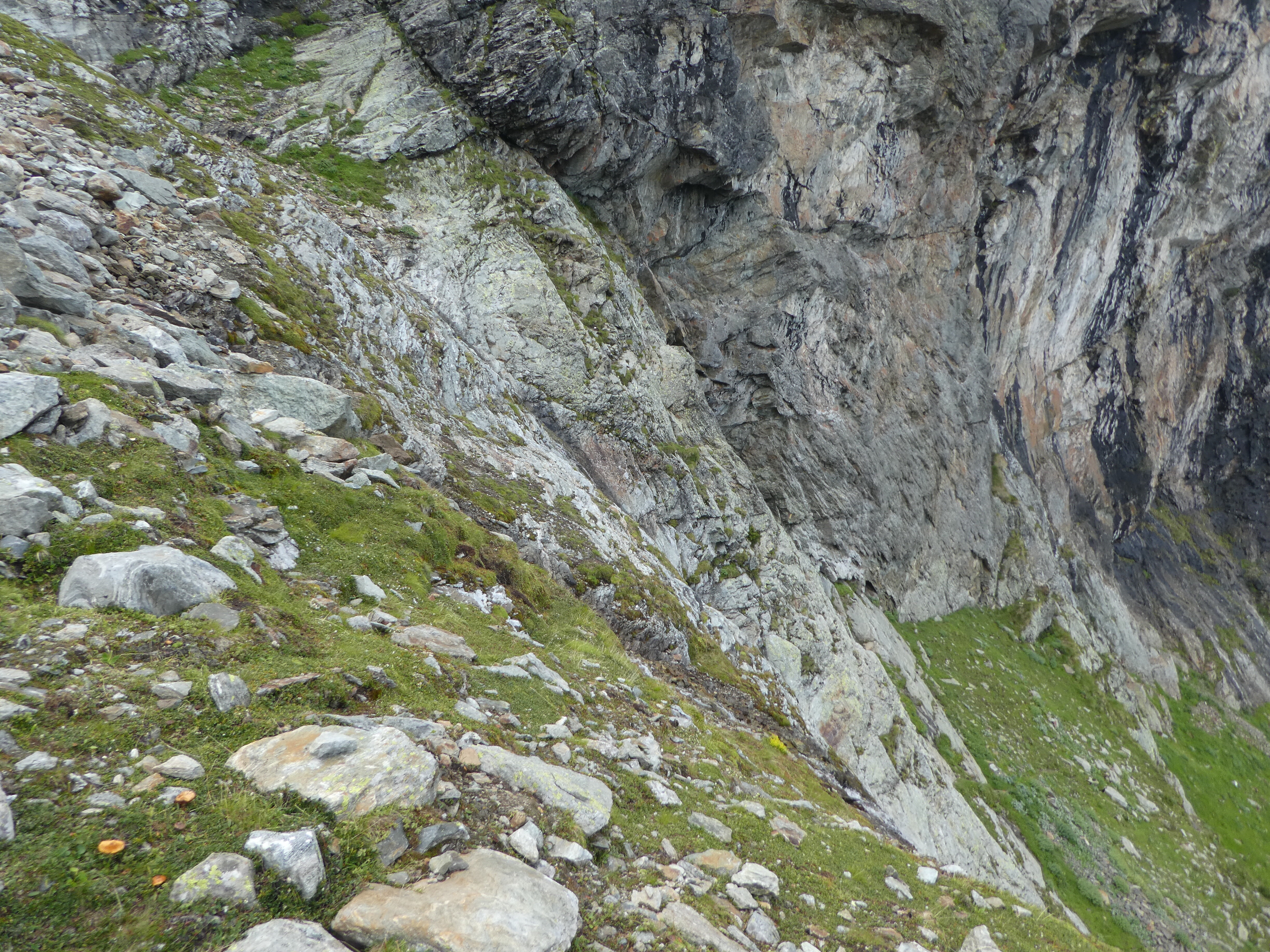 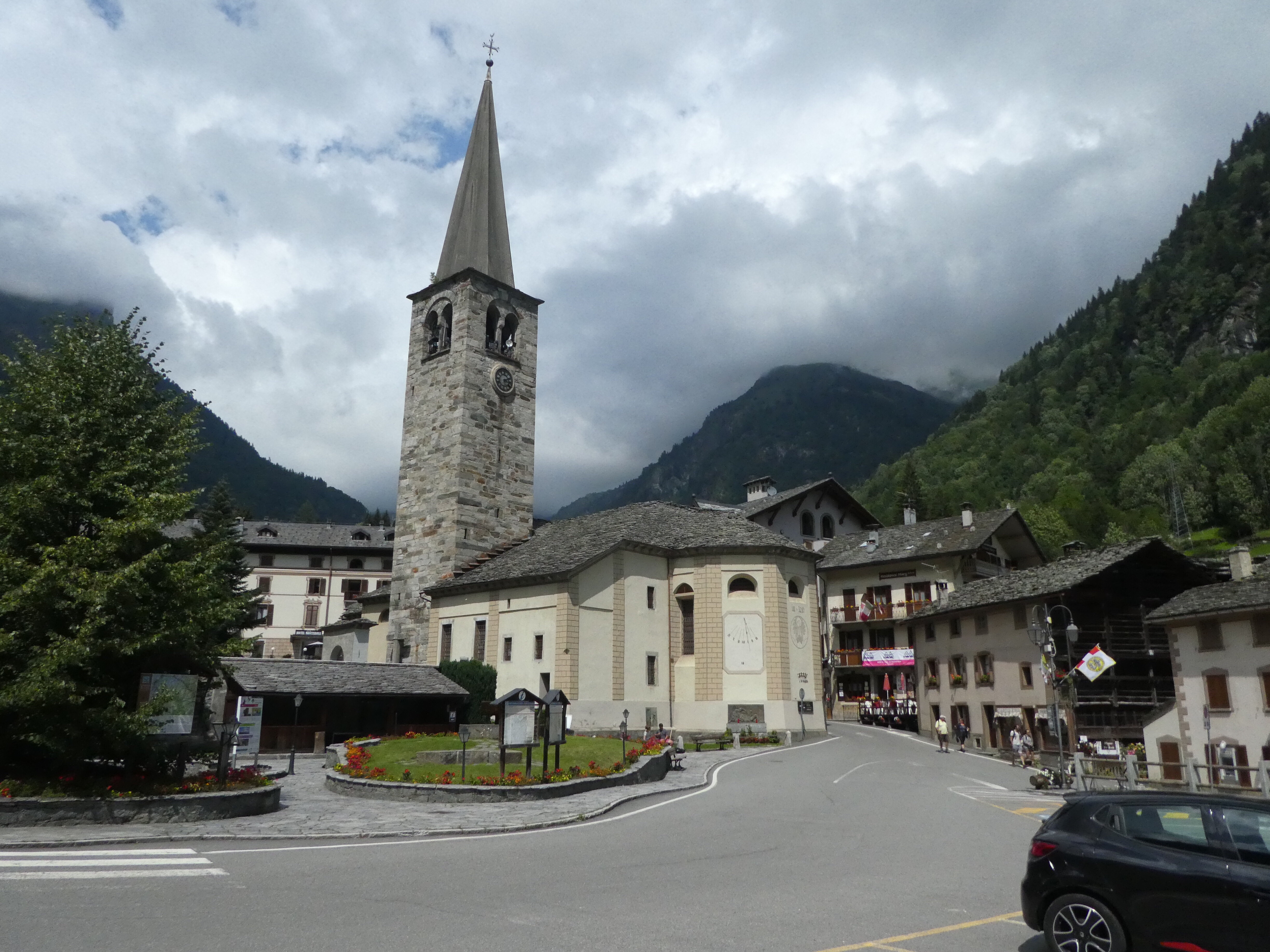