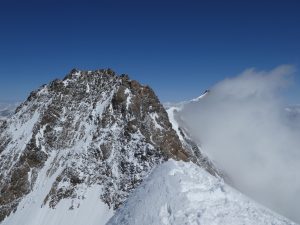 The Monte Rosa massif includes many of the Alps’ highest peaks, including the second-highest, the Dufourspitze. I had written off climbing Monte Rosa, since it is buried behind the huts and cable cars of Zermatt. However, some of its subpeaks are normally approached from the Italian village of Alagna (1200m). These climbs are normally done with a fairly egregious cable car (3200m) and hut (3600m). However, they can also be done car-to-car, and I realized that I could not just reach the Dufourspitze, but also sweep up some of the lesser satellite peaks along the way. It would require 3500-4000m of elevation gain, similar to what I did for Mont Blanc, making it a tough but not ridiculous day. 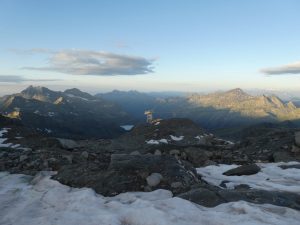 It was absolutely bucketing rain as I drove west and north to Alagna, nearly overwhelming my wipers at full speed, but the next day’s forecast looked good, so I set my alarm for 3:00 AM and tried to get some sleep. I started hiking around 3:20 and, after a false start up the path to someone’s house, found the path to the Rusa district of Alagna and on up the ski area (trail number 205 or 5). I passed the usual ski area detritus on the way up — huts, snow-making machines, lift stations — but all were quiet in the dark. The sun rose near the upper lift stations, around 3000m, hitting the peaks intermittently through some scattered clouds above the valley. 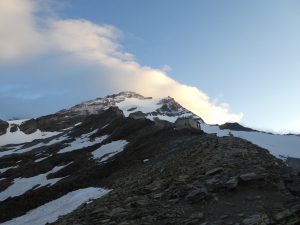 Above the lift stations, I followed a marked path with some hand-lines along a ridge to some ruined-looking building with a diesel motor inexplicably running inside. The faint path then continued across a mixture of talus and snow to join the boot-pack from the tram station. The glacier above was slushy in places, but mostly hard enough for crampons. I crunched my way across, passing two groups of four who I thought were descending early to the tram. Later, I realized that they were climbing Piramide Vincent by its southeast glacier, something I probably should have done. 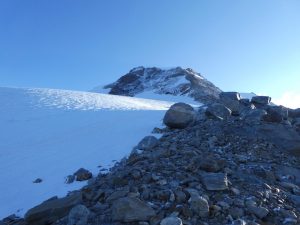 Instead, I continued up the steps and hand-lines to the ridge on the glacier’s other side, from which I could see the two high huts. The Citta di Mantova hut is the usual solid stone structure, but the Gnifetti hut is a sprawling thing that looks more like a high-altitude shanty town, a sprawling structure with bits of wood and tin roof mixed in with the stone. I skipped both, following Piramide Vincent’s rocky southern ridge and the glacier to its left toward the summit. Given the previous day’s precipitation, this turned out to be a poor choice, since the talus was spotted with a mix of fresh snow, ice, and rime. It was awkward climbing, but I made it work, and beat the glacier-climbers to the summit. I was cold, and only stopped for a few seconds before descending the track on its northwest side. 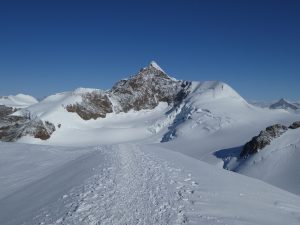 Here I began to meet the hordes coming up from the hut. There had been maybe half a foot of fresh snow on the glacier the night before, but thankfully the trail crews had been out installing fresh boot-packs, so I had only to follow the right lines. I jogged down to the saddle, then traversed around and through some lesser summits, including one with a small hut and huge Christ statue on top. Past these, I followed a path up the Parrotspitze’s narrow north snow arete. The fresh snow and cool overnight temperatures made for perfect travel conditions, with no need for crampons until near the end of the traverse. 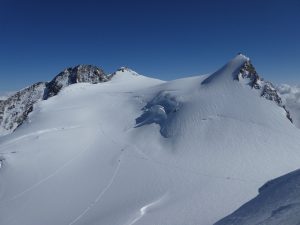 I continued on the path over the summit, passing more people in the next saddle before joining the main road to the Margherita hut on the Signalkuppe’s summit. At 4556m, this full-sized hut is the highest building in Europe, and seems to actually be used by people “climbing” the nearby peaks. I sat out of the wind to have part of a sandwich, decided that I did not need to go to the top floor of the hut to reach the summit, then returned to the saddle to the north, passing a dozen packs people had left there to summit the nearby Zumsteinspitze. There was some sort of bottleneck on the rocks just below the summit, but it had worked itself out by the time I reached it, carefully climbing a steep track for which I would use crampons on the way down. 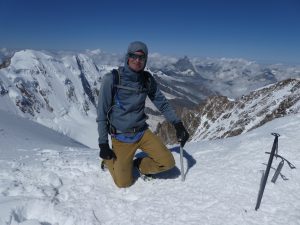 Someone offered to take this…

There was a small crowd on the summit, with its fine views of the nearby Dufourspitze to one side, and Lyskamm’s impressive north face to the other. Clouds were rising off the Italian side of the peaks, obscuring the valleys to that side, but it was sunny on the Swiss side, and I could see the whole of the long Monte Rosa and Grenz Glaciers. Since there was no sign of the weather deteriorating, while everyone else returned toward the hut, I started off down the ridge toward the high point, following a much fainter track. 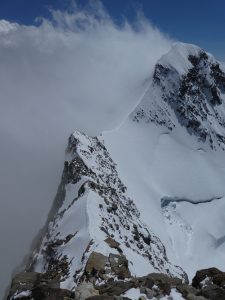 About 50 yards down, I realized that it was stupid to descend this compacted snow arete without crampons, and awkwardly stopped to put them on. This snow descent was probably the day’s crux. The prevailing wind seems to be from the west (Swiss) side, creating hard-packed snow on that side, and corresponding cornices on the other. I passed a guide and two clients shortly below the summit, who were either scouting the route or retreating; beyond, I had only hints of an old boot-pack to follow. Most of it was a careful snow descent, playing a game of “cornice chicken” to stay on the softer, lower-angle snow near the crest. However, one short rock step gave me particular trouble. After some experiment, I eventually dealt with it via a bit of dry-tooling, sliding the pinky-rest into position on my ice axe, then wedging the pick in a slot to create a handhold in the right place. 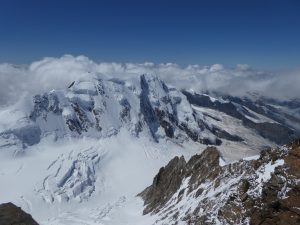 The south-facing climb up from the saddle was the only real rock scrambling I did the whole day. There was still some fresh snow hanging around, but it had melted off enough for climbing without crampons, and the underlying rock was fun and solid. I strayed right of the ridge on the way up, but would have had better climbing staying on the crest. Reaching what I thought was the summit, I was disappointed to learn that I was on the Dunantspitze, named for the founder of the Red Cross. It would take another ten minutes of careful traversing to reach the actual highpoint, a bit over an hour from the Zumsteinspitze, and nine from the car. 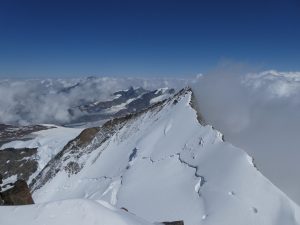 I was surprised by the absence of a summit cross and presence of a register, though it was just a wad of wet paper. I took in the views, briefly contemplated traversing on to the Nordend, then sat down to eat the last of my food. Just as I was starting back, a helicopter came from the direction of the Margherita hut, along the ridge over the Zumsteinspitze, and flew slowly quite close to the summit. I made an obvious “I’m okay” wave, with one hand up and the other down, and received a response, so it seems like they were checking in on me. 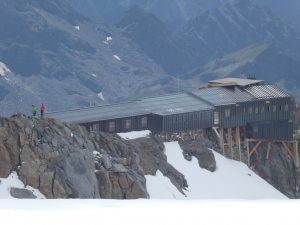 It took about an hour to return to low-angle snow on the other side of the Zumsteinspitze, where I put away my crampons and turned off my brain for the day. The highway of a boot-pack back to the Gnifetti hut was finally starting to deteriorate, with occasional calf-deep postholes into the old underlying snow, but it was mostly easy going. There are several crevasses on the final descent to the hut, but the pack followed a safe path, and I did not see any ominous leg-sized holes like I did on Monte Cevedale. The lower glacier above the tram station was in wretched condition, with some of the bare ice turning to an unavoidable morass of ankle-deep slush. I wrung out my socks as best I could on the other side, then tenderized my feet on the 6000-foot hike down the ski area to the car. I was impressed by Lyskamm, a more impressive-looking peak than Monte Rosa, but would probably take the tram if I went back to do it. This is a once-a-year approach.

Dawn on the ski area

Mont Blanc in the distance