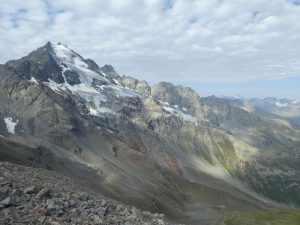 Cima di Piazzi is a stylish-looking peak rising 2100m above the town of Isolaccia in the Valdidentro, its north face covered in glaciers. There are routes from all directions, with the easy standard route coming from the south. With limited information, I chose to approach the northeast ridge from the gondola parking lot in Isolaccia. This turned out be a pretty bad plan, since you can drive higher on a road out of Isolaccia, and the ridge is a long hike followed by some obnoxious choss. I found a shorter way down, though it was just as chossy, so I recommend using another route to the summit. 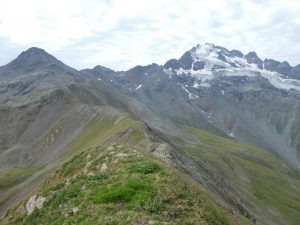 I was woken by rain during the night, so I was in no rush to get started, getting a semi-alpine start with only a few minutes’ headlamp time. I located a likely trail using my Peakbagger map, and started up a steep dirt road past some houses, then up some ski slopes, passing under a gondola, then around some poma lifts higher up. This was not the most inspiring “climb,” but I hoped things would improve once I reached the ridge. 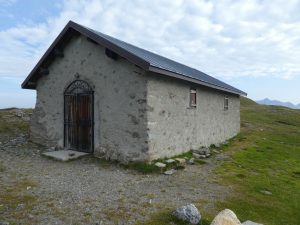 The peak finally came back into view at a shrine built in the 1600s, dedicated to a random Irish saint who supposedly granted women fertility, a belief apparently local to the Valdidentro. From there, I left the official trails to follow what I thought might be a goat or chamois trail along the gentle ridge. The trail saw a bit of human traffic, as evidenced by occasional cairns, but much more animal, with enough dung in some parts for it to smell like a barn. There was a bit of scrambling, but it was mostly an easy walk to the Corno de Colombano. 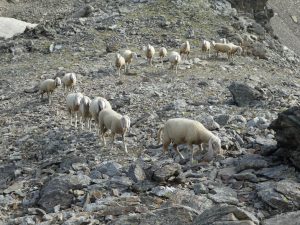 Descending to the the col on the other side, I finally saw what had made the trail: a herd of domestic sheep. They were lazing around the saddle until I passed by, then started to follow me a bit before giving up interest. This is where things got annoying. The rock is mostly garbage, either unstable talus, outward-sloping stuff with gravel on it, or rotten. The ridge also has a number of ups and downs, each different as to whether one should go around or over. The one highlight of this section was seeing a lone ibex, who watched me from a safe distance. I had seen them before below the Matterhorn, but those had remained silent. This majestic creature was more vocal, and it turns out that ibexes squeak like marmots. I never would have guessed. 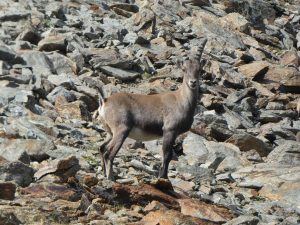 The rest of the climb was fourth class in a few places, but mostly just annoying. However, it was uncrowded and nearly unmarked for a change: I saw no people or boot-prints, and only a single old sling. The summit had the standard cross, with a well-protected register attached, which I dutifully signed. The north glacier was too steep to descend with running shoe crampons, so my only option was to return down the ridge. I tried to cut off some distance by dropping north down a subsidiary ridge. It was more uber-choss, but at least it was short, and relatively easy going in the valley back to another road. From there, it was just a road-walk back to town.

Europe is experiencing an historic heat wave, of which I was well aware while sitting comfortably on a 3400m summit in a t-shirt. This can be dismissed as just weather, not climate, but global warming is ever-present in the Alps, where you are constantly surrounded by rapidly-retreating and long-studied glaciers. Just today, Olivier Bonnet died when a rock broke under him on the Dent du Géant. As the article concludes, “because of global warming and the high temperatures of recent years, the mountain is drying up and is weakening.”

If you have some time, you should read this recent Times review of our sorry history of climate policy. I knew about some of the players, but did not realize how close we came to doing the right thing, or how richly John Sununu deserves a special place in hell. The takeaway is that we humans have known about the greenhouse effect since the 1950s, but have demonstrated fairly conclusively that we just don’t care enough about the future. Neither our political institutions nor, perhaps, our evolved psychology, is capable of addressing a long-term problem like climate change. I don’t think we will go extinct, as much as we may deserve it, but I’m sure glad I won’t be alive in another 100 years.

This entry was posted in Climate, Europe, Meta. Bookmark the permalink.