Cimon della Palla is an impressive sight from Rolle Pass, rising 1100m above the road. Looking through things to do in the Dolomites on Mountain Project, its northwest ridge, a 10-pitch 5.4, sounded like a perfect target. Not so. The Mountain Project description turns out to be completely useless — “go up a ramp, then up the ridge, then up another ramp” — and the route does not see enough traffic for there to be a use trail on the approach. I started up something that seemed like it might be the northwest ridge, and found traces of previous use: an equalized piton and old hex, and a piton driven into an outward-sloping ledge traverse. I did not see anything I wanted to try above that second piton, so I carefully and somewhat scarily downclimbed the ridge. Maybe I just didn’t have it that day, or the overcast skies got me down, but that sure didn’t feel 5.4. I scouted out another potential start, but I was already defeated, and retreated to town to do laundry.

I returned the next morning to do the standard route, rated UIAA II-III (i.e. low fifth). I parked at a cowshed just over the pass, then took a long, traversing trail toward Passo Verde. Along the way, I ran into a sign for a ferrata leading to the bivouac hut high on Cimon della Palla’s southeast side. I thought for a minute, then decided to check it out. This turned out to be a great choice: while the ferrata had a few iron rungs, it was mostly unimproved, and the original climb was a fun scramble on awesome steep limestone, mostly class 2-4 with a few low fifth class crux sections. My main interaction with metal was not pulling on it, but banging my head on the stupid cable when it was in the way. Taking this route turns a fairly short summit scramble from the hut into a full 800m or so of fun.

From the end of the ferrata, I trudged up some limestone scree (the worst), following a faint use trail along the peak’s southeast ridge. I stayed close to the crest, eventually reaching the east side of a large notch below the summit. On the way back, I found that there is a north-side bypass, but I powered through by downclimbing some class 4 rock.

The first part of the summit climb has been partially ferrata-ed, so after messing around a bit, I followed the cable. Above, there seemed to be several options to proceed. I ended up climbing some rock on the far left, which I found to be the route’s crux, steep and somewhat rotten. Just past this section, I came to the natural arch mentioned in the route description. Supposedly the easiest route passes through the arch, but after playing around a bit on the wet rock inside, I decided it was easier to climb up and across arch, on exposed but solid rock. From there, a bit more scrambling led to the summit cross, which is actually short of the true summit. I scrambled over to the highpoint on the narrow ridge, then returned to the cross to have a sandwich.

I was a bit surprised not to meet anyone else on my return: surely there should be people climbing an iconic Dolomites peak on an August Friday. However, I quickly ran into crowds as I traversed to Cimon della Palla’s slightly taller but less impressive neighbor, Cima della Vezzana. Unlike Palla, which has no easy route, Vezzana is a walk along a trail with almost no exposure, skirting below the peak’s huge, steep west face until just before the summit. I passed a group of ten or so hikers on my way to the summit, seemingly enjoying the fine day.

I hung out for awhile, hoping to get a clear view of Palla’s north face, but the mist never fully cooperated, so I eventually gave up and headed home. Rather than downclimb the ferrata, I took a trail around toward the Rosetta refuge, which began with some fine boot-skiing down the Valle dei Cantoni. The shortcut trail toward Passo Verde was adequately marked, but apparently rarely used. I saw a group of men having lunch near the intersection with the traversing trail back home, whom I avoided. I continued along the main trail, past some picks and shovels, only to hear one of them yell at me. It turns out that they were a trail crew who had just rerouted the trail above a wash-out, and I had started onto the old trail. I thanked them, then pointed some French hikers in the right direction on the other side of the detour. The rest was just trail hiking, with a long break to let a single group of 20-30 people carrying helmets to pass. Maybe Cimon della Palla will be busy tomorrow. 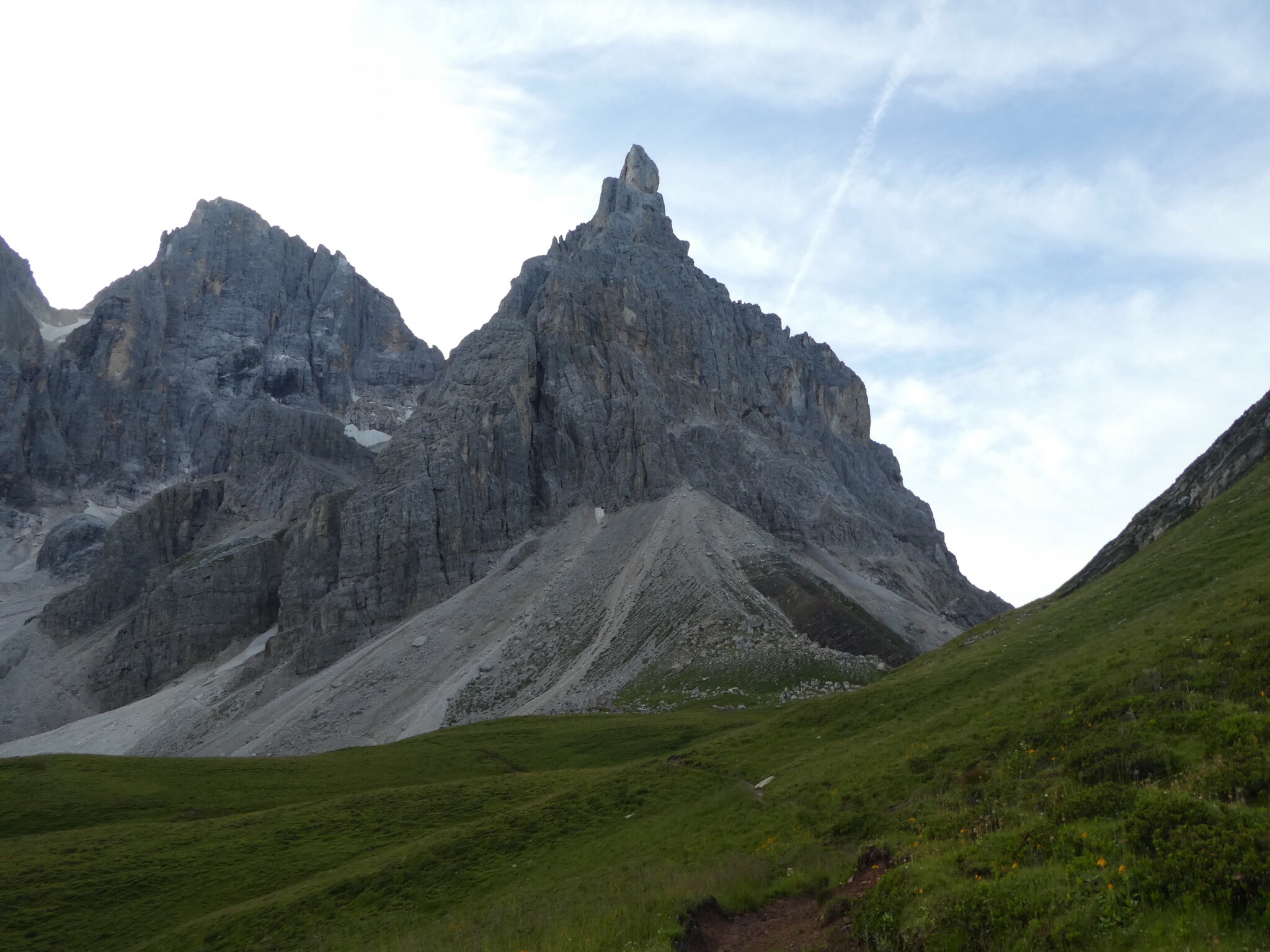 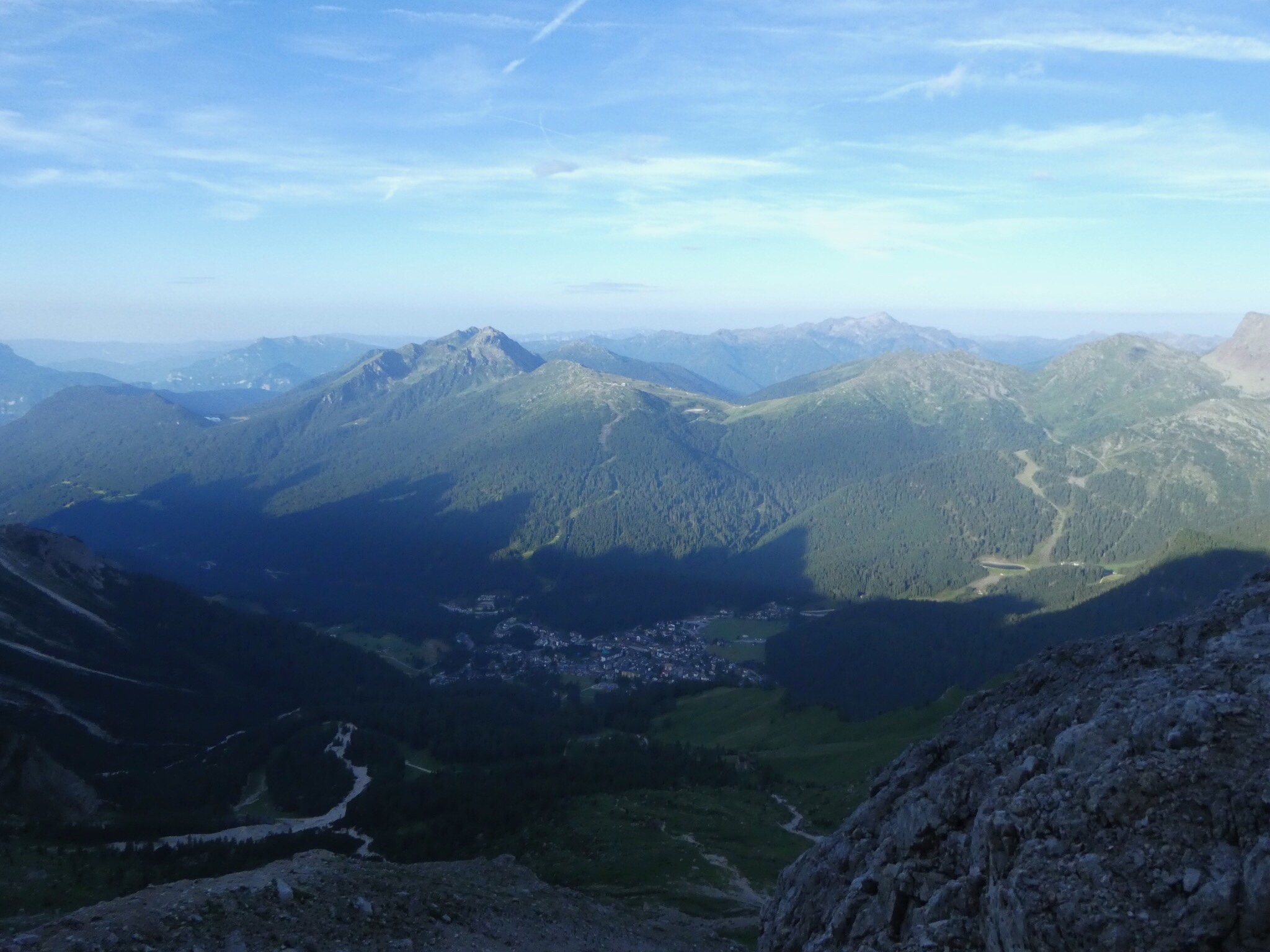 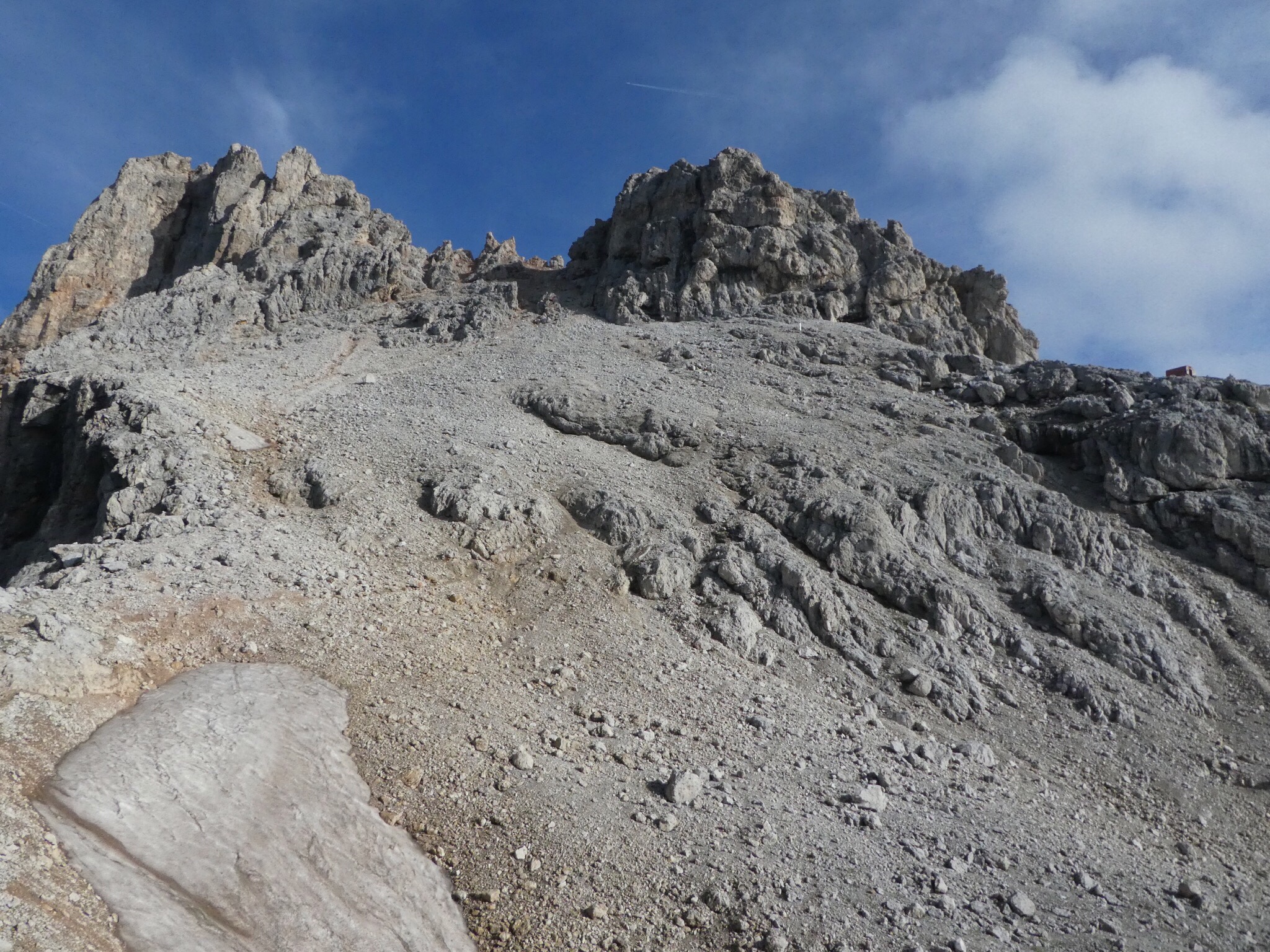 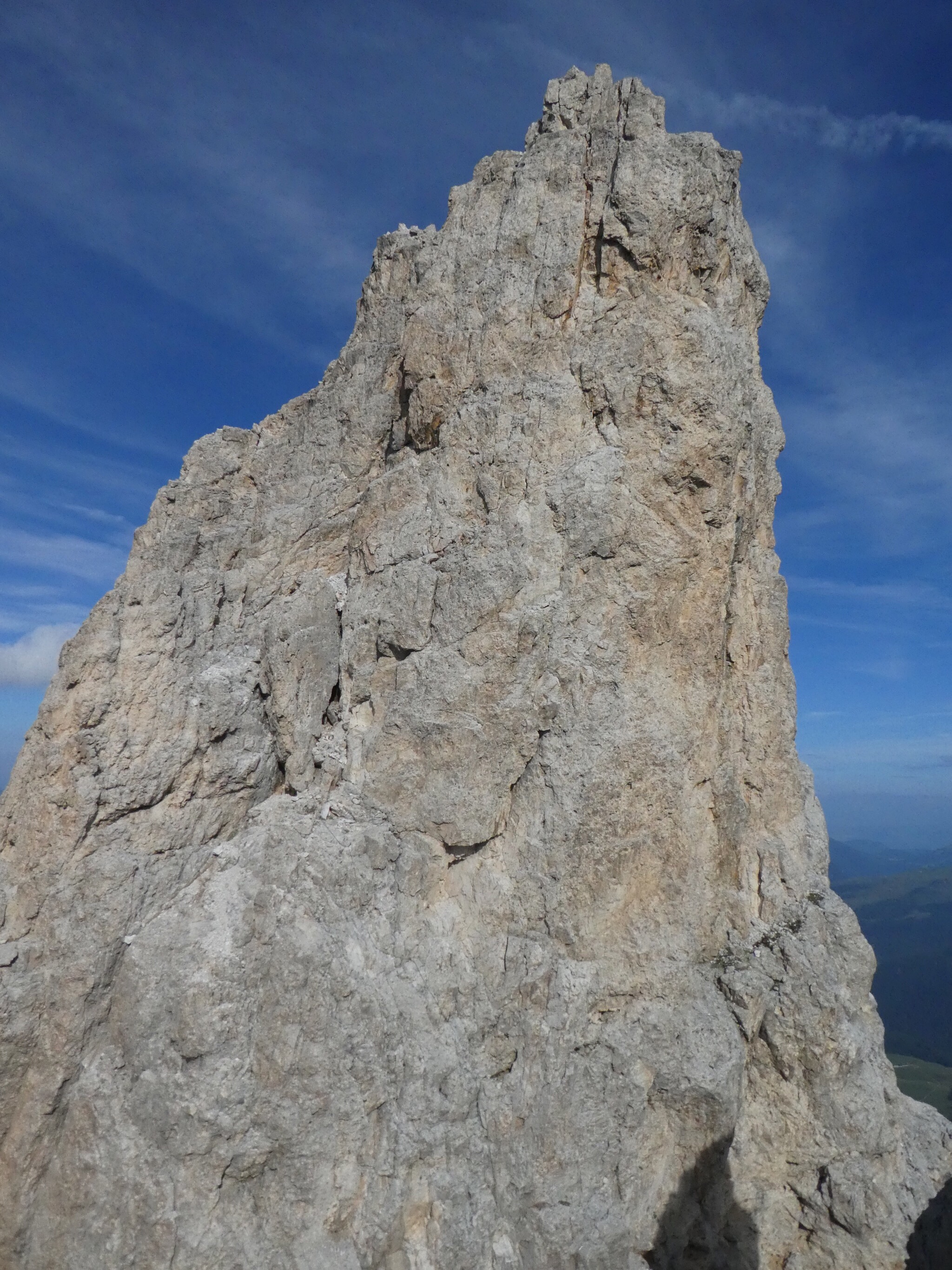 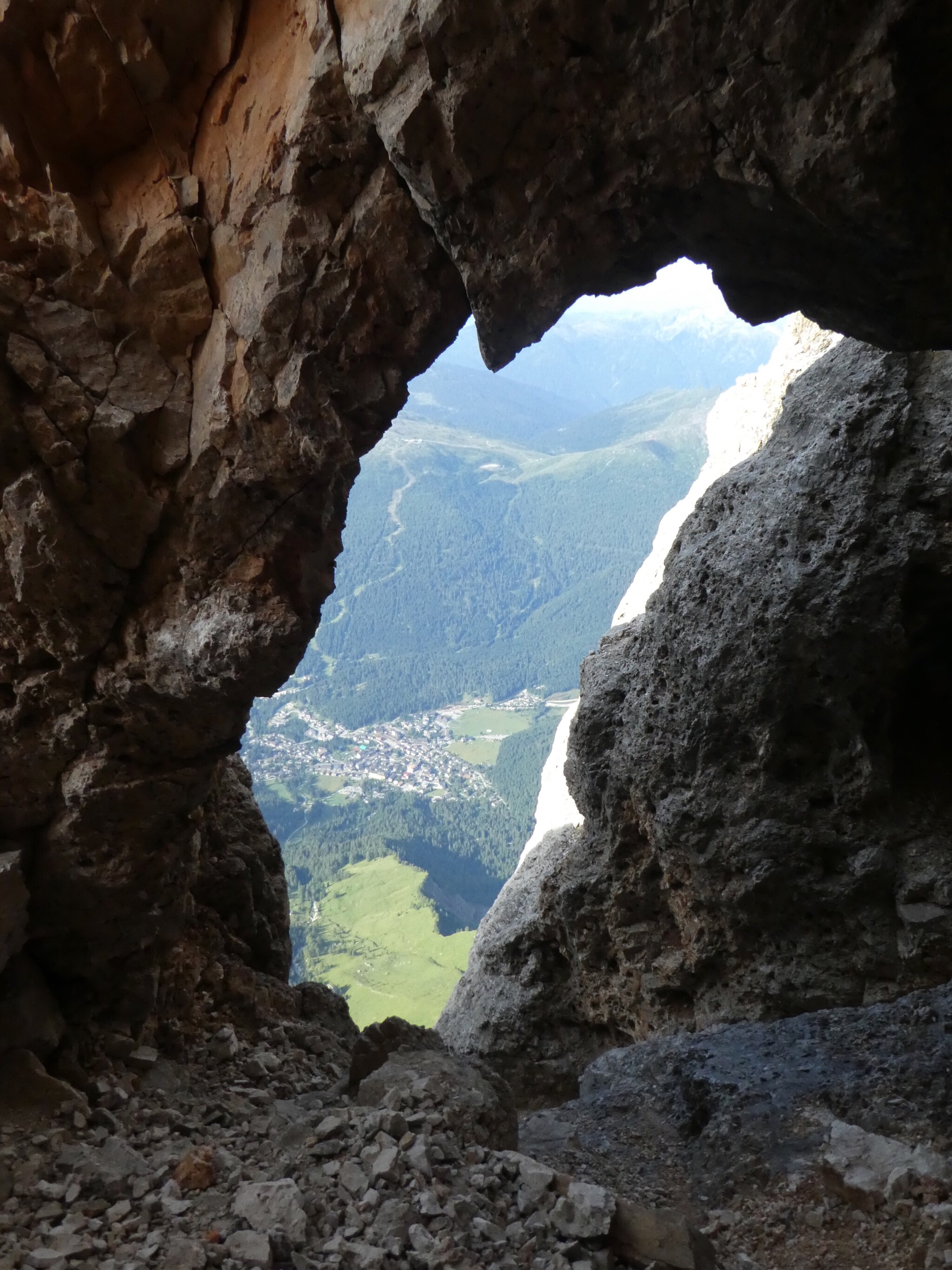 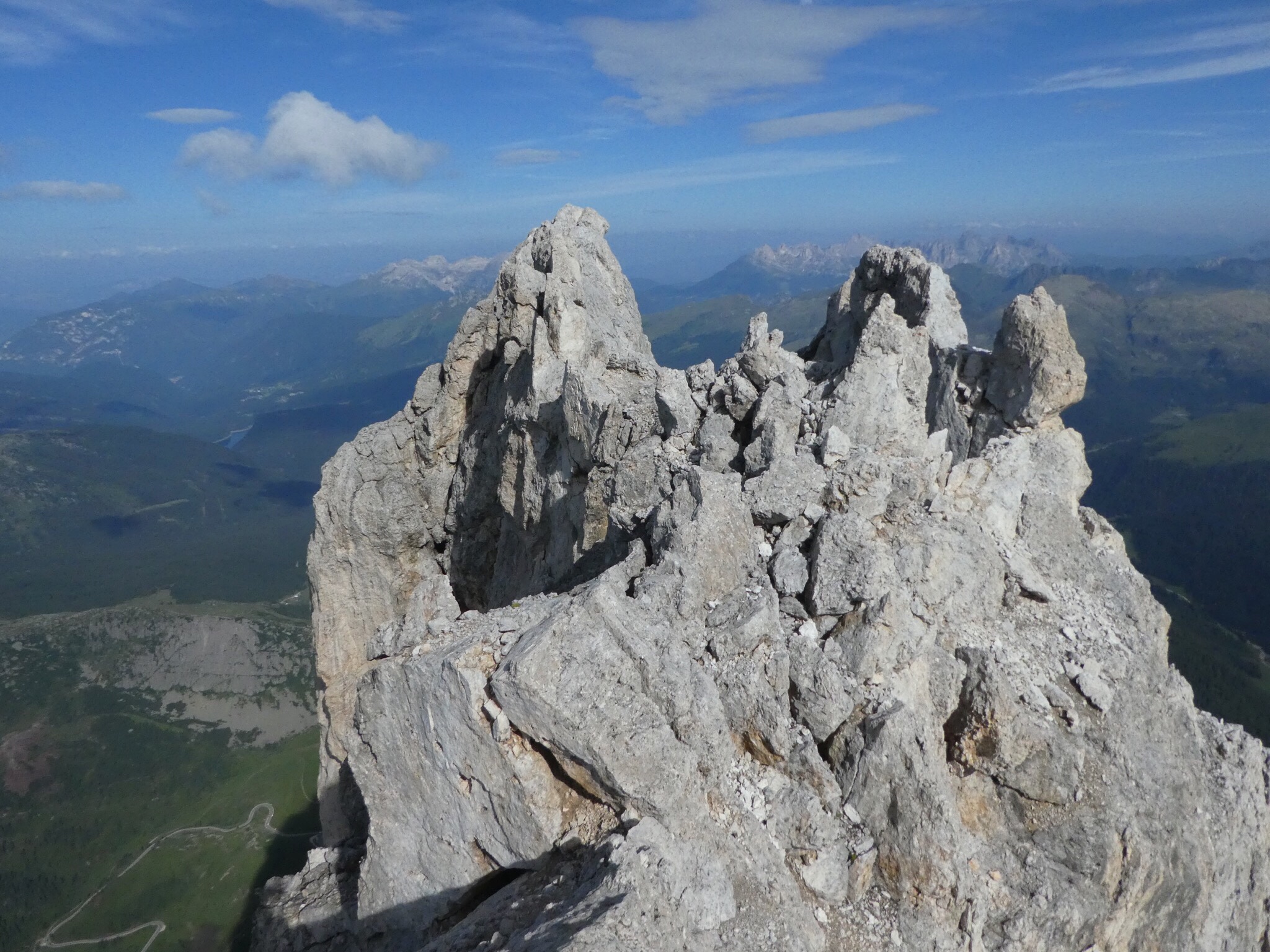 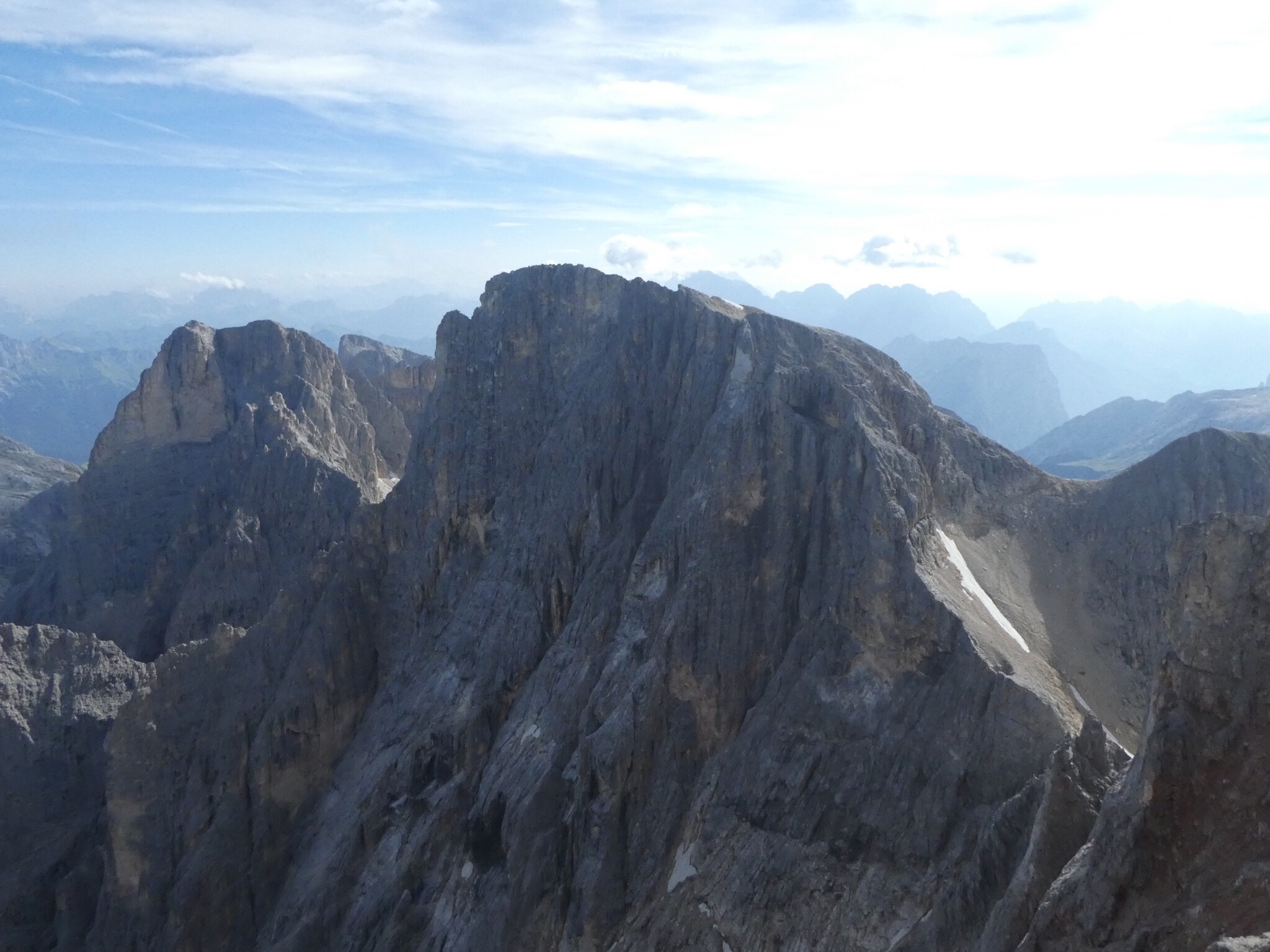 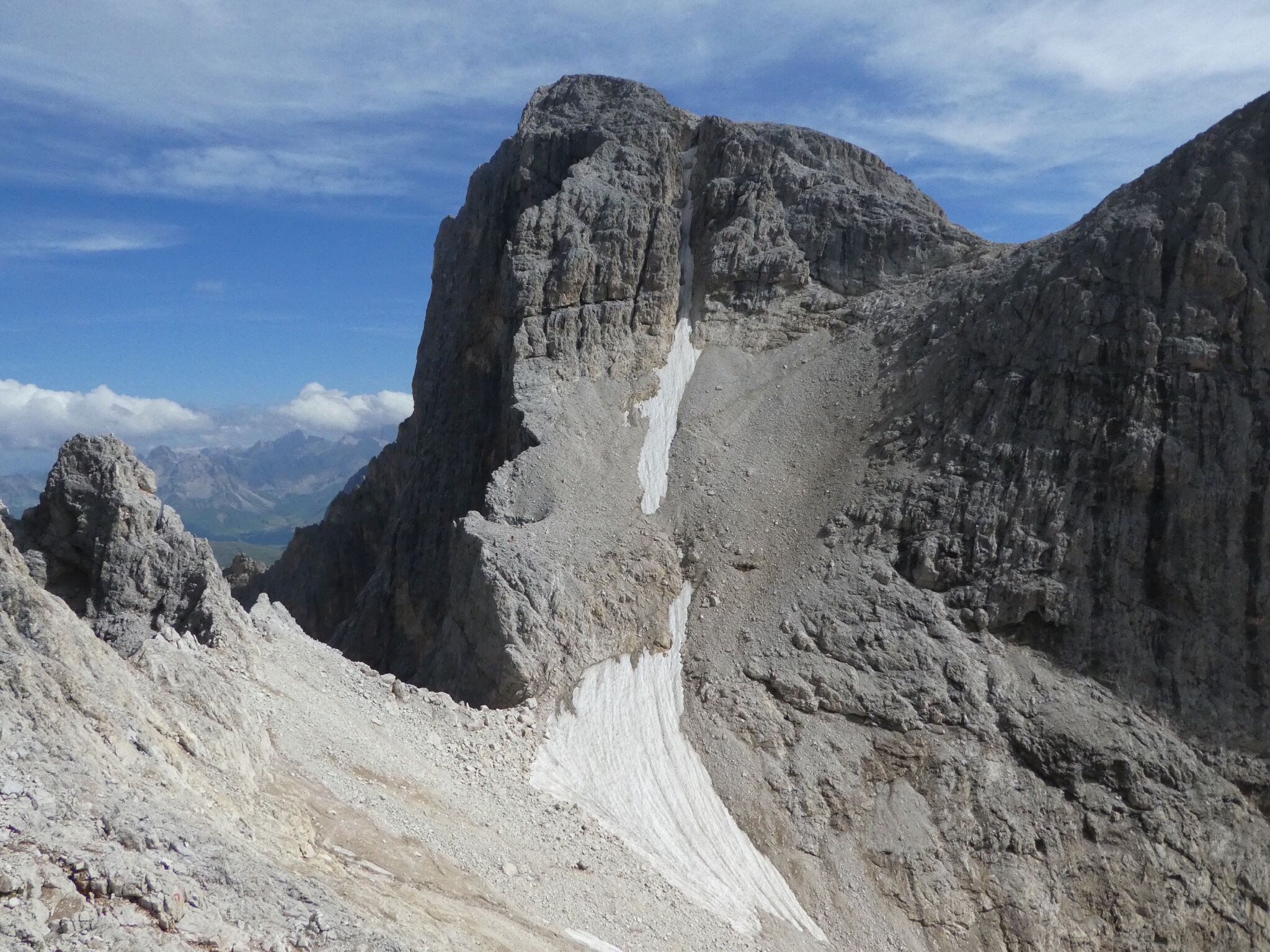 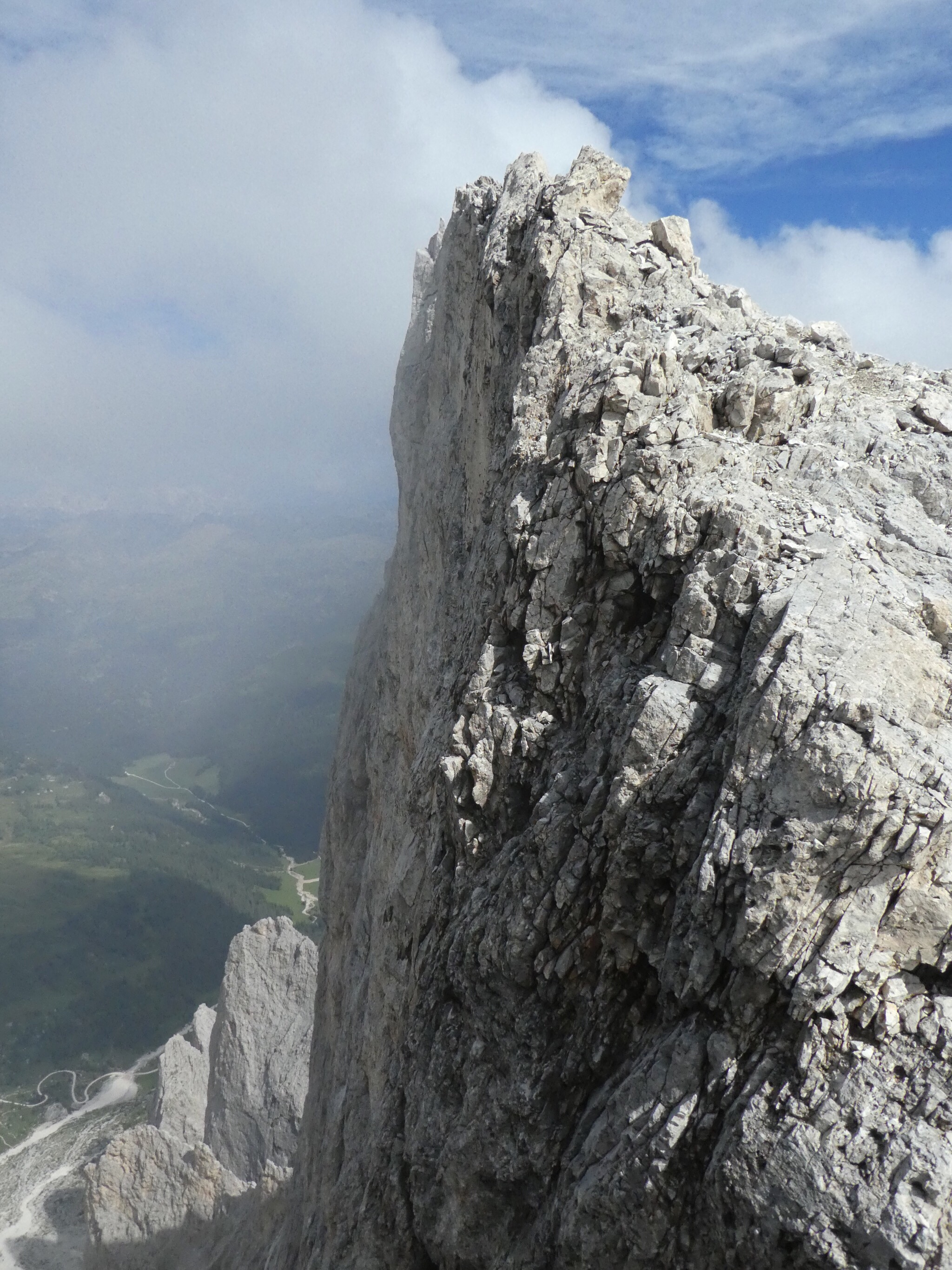 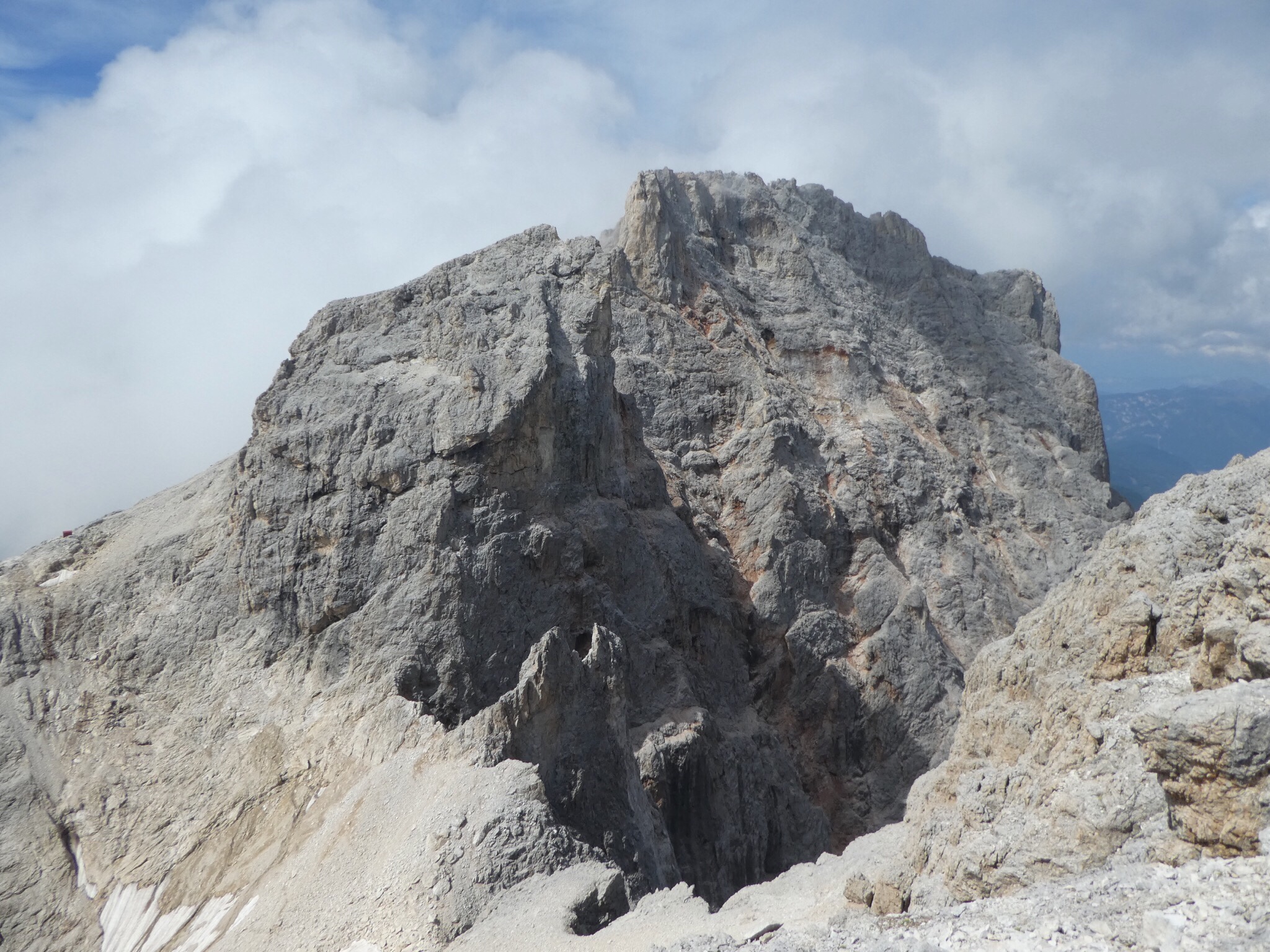 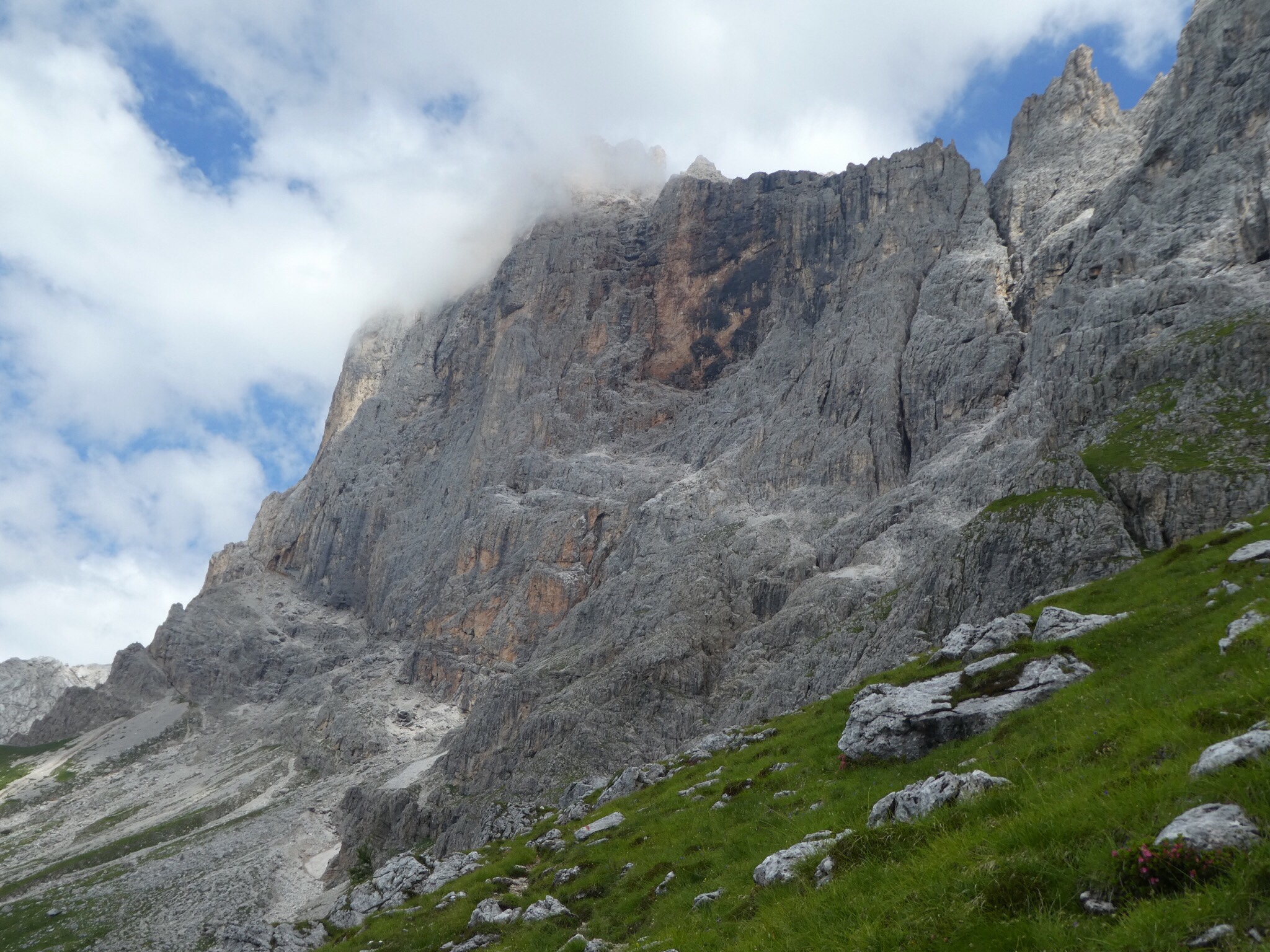 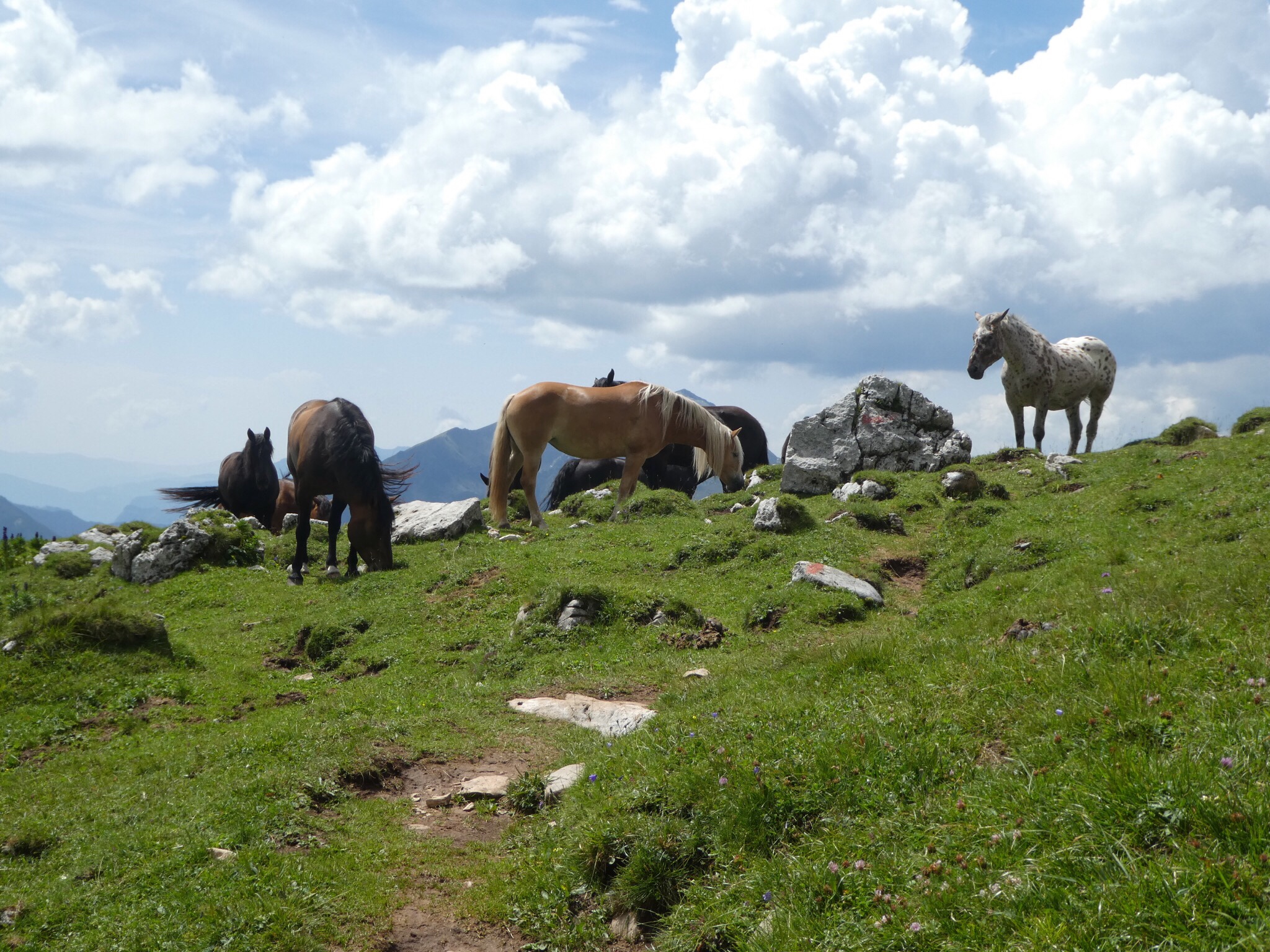