Piz Bernina is an outlier, far east of the other Alpine 4000m peaks, which can be approached from either Switzerland or Italy. I chose the Italian side, both because I was tired of dirtbagging in Switzerland, and because there is a remarkably high trailhead at 2000m. This is reached by a crazy road from Sondrio in the Adda River valley. It starts out as a normal Italian mountain road, with no center line and just enough room for two cars to pass each other. Past the village of Franscia, it takes things to the next level, with pavement sometimes wide enough for two Euro-sized cars to pass, and sometimes not, with the driver left to guess. There are a couple of telling road signs: “15 hairpins over the next 4 kilometers” and “8 tunnels ahead.” The tunnels are glorious, unlit things with bare stone walls and cobbled floors, again only sometimes wide enough for two-way traffic. At the top, I found a huge parking area with a few fire pits and picnic tables, and a couple of dozen folks car-camping. It felt good to be back among my people.

With such a high trailhead, just over 2000m below the summit, I got a lazy start around 5:45, crossing the dam creating the Lago di Alpe Gera, then following the trail to a large hut just above. The hut may mostly be used by day-trippers, because it was utterly quiet when I passed. I noted the sign describing the depressing retreat of the region’s glaciers, then followed a path to the Marinelli Hut. This turned out to be a slightly indirect route to the summit, and far less interesting than the direct route up the big, dry Felleria Glacier to Marinelli Pass.

The trail was surprisingly faint, though I had no trouble following the many painted rocks. At a col, I had to put on crampons to descend a small, shaded glacier, then re-climbed another faint trail through the talus to the Marinelli Hut. I saw some people moving around inside, but did not pause to investigate before climbing to rejoin the correct route at the West Marinelli Pass.

From there, the route crosses the large, flat, dry Scerscen Glacier to its northern arm. This part of the Alps seems to have many high, broad, flat glaciers, with few feeder streams or valley tongues. I hopped my way through a dry crevasse maze, then picked up a solid boot-pack as the glacier acquired surface snow in the shade and higher elevation of the arm leading to the Marco e Rosa hut at the Crast’ Aguzza. This hut, at a ridiculous 3600m on a 4050m peak, makes the summit climb ridiculously short — less than an hour if you scramble it.

It looks manageable to stay on the glacier all the way to the ridge and hut, but there is a rock route bypassing some crevasses partway up. This being Italy, that rock route involves gonzo hardware. While there were not as many ridiculous things as on the Matterhorn’s Liongrat, the initial… via garbaggio?… was pretty extreme. It starts with some rebar covered in ice, then a series of twisted ladders attached to the rock in various ways, sometimes hooked over rebar, sometimes tied to other ladders with old climbing rope, left to swing free. It is not reassuring to see the holes and bent remains of previous versions of this horror. Even in running shoe crampons, the snow would probably have been less sketchy. Above that, the route to the hut is a sort of class 3-4 via ferrata.

I saw a few people as I passed the hut, then some more descending as I headed toward the peak on nicely firm snow. It was a beautiful day, with the night cold enough to have frozen the snow, but the day warm enough that I stayed in just a t-shirt the whole time. There was a bit of delicate maneuvering to get past some slush-over-ice to the rock, then some easy rock scrambling.

Then things got obnoxious as the climbers were all concentrated onto the narrow summit ridge. The route’s crux is probably a pitch or so of class 4-5 just after where the ridge first narrows. I reached this just as the bulk of the hut-climbers were descending, and was confronted with people rappeling and being lowered on several ropes, from various pieces of fixed hardware. I dodged my way through, either on the very polished “easy” rock, or on some less-polished but steeper stuff to the left, being very careful not to knock anything down. The others were generally well-behaved, but it is hard not to cause rockfall when rappeling in crampons.

Above, I passed a guy taking a nap until the traffic died down, then worked around a few more groups on the ridge to the summit. It was a bit chilly in the wind, but wonderfully warm on the south side, with comfortable places to sit. Wanting to wait for traffic to die down, I ate the rest of my food, then watched some groups threading through the crevasses to nearby Pic Zupo and Pic Palu, and admired the long Tschierva and Morteratsch Glaciers to either side flowing north.

Eventually, thinking about the softening snow, I retraced my steps. It turns out that I was a bit too early, and had to fight my way through some seriously obnoxious traffic on the crux. There were once again guides lowering clients, groups rappeling, and a few others waiting around for things to die down. Fortunately I managed to hit a break in traffic on the rock below the hut, where there was a lot of rockfall potential. I took the glacier route on the way back, which was a bit faster and much more interesting, and was back at the car by mid-afternoon. The outing had taken longer than I expected — the approach is not just a straight-up climb out of a valley — but it was still a comfortable day, leaving me with enough time to drive over the Stelvio Pass to camp on the other side. 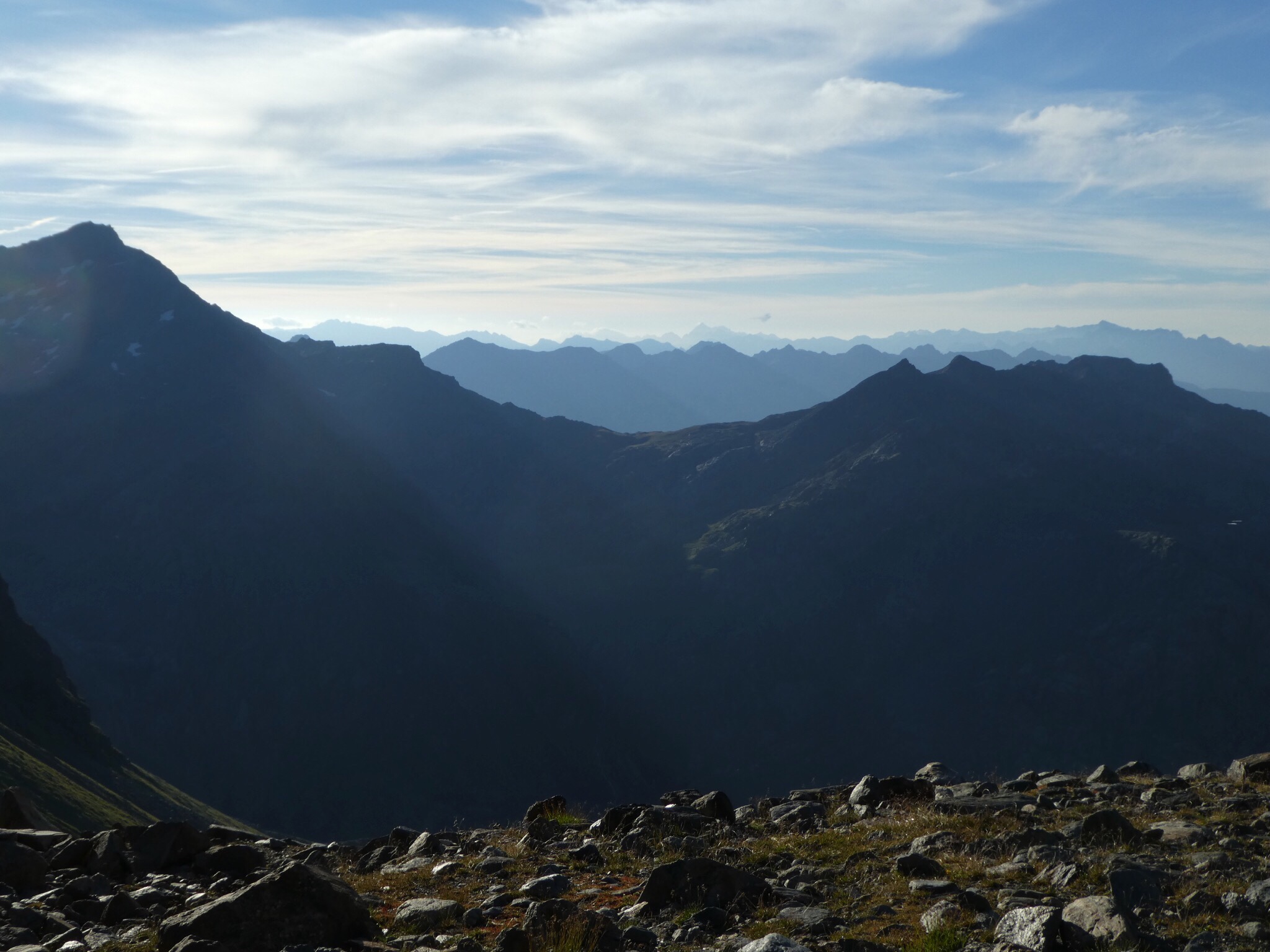 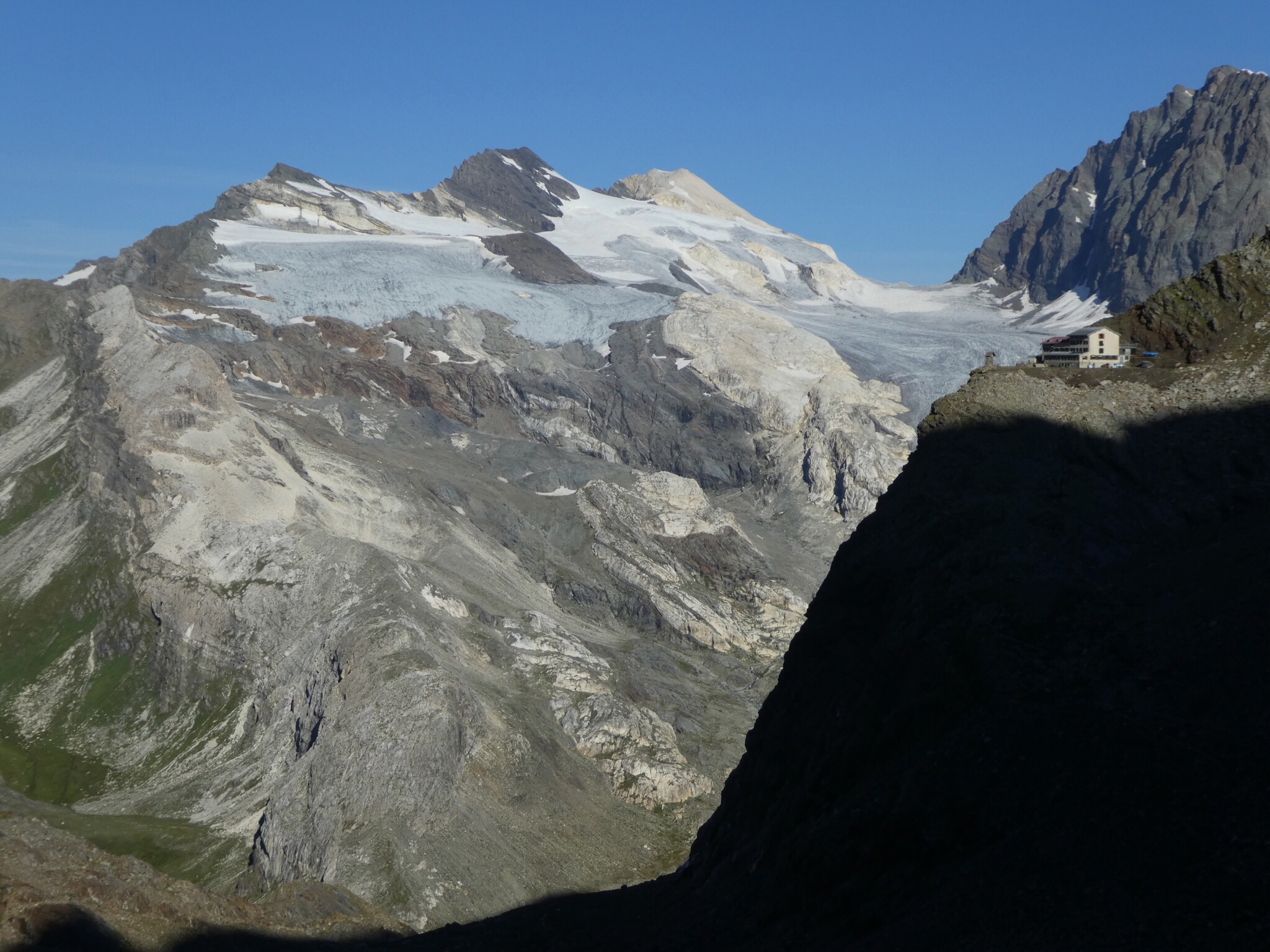 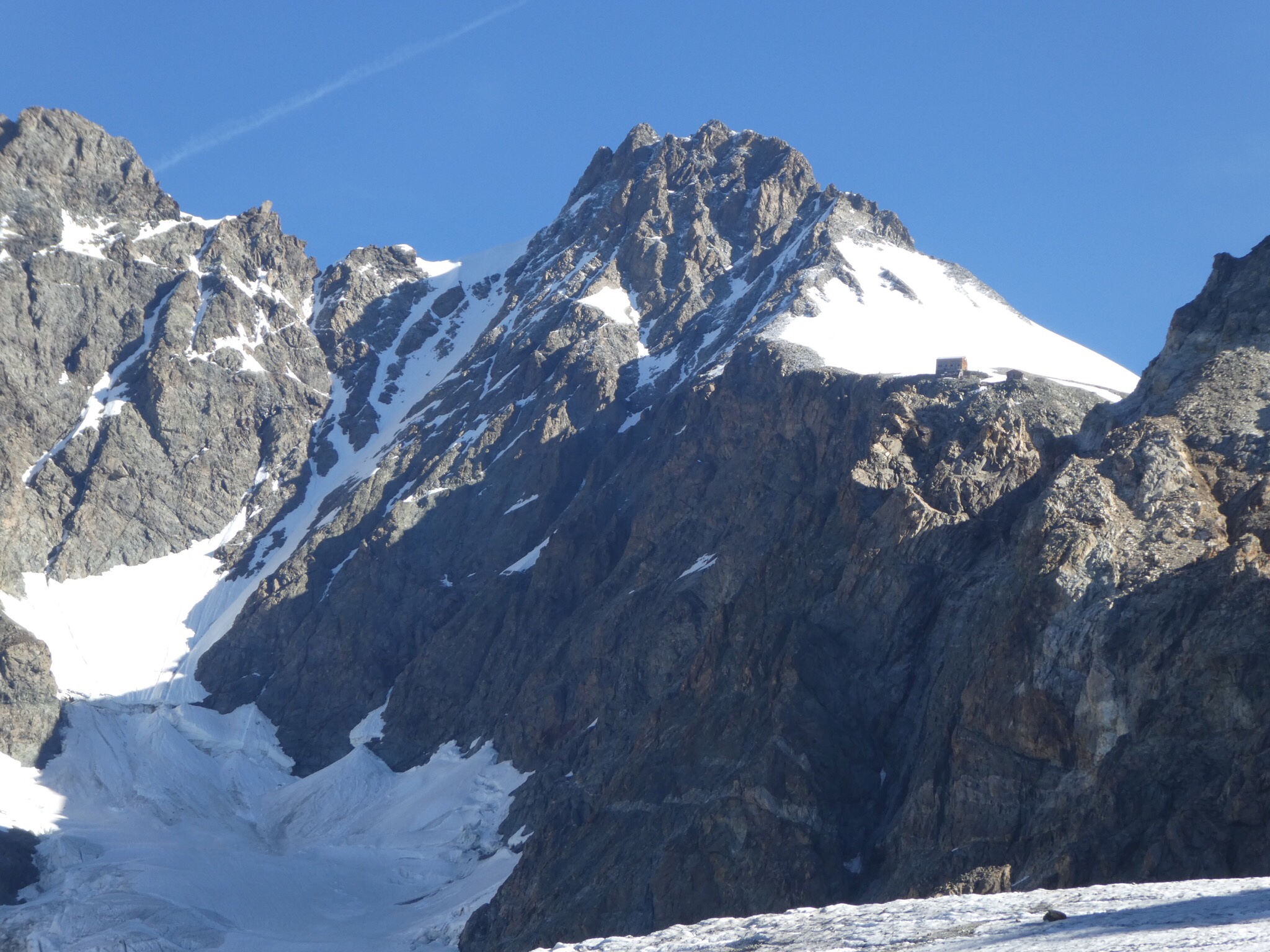 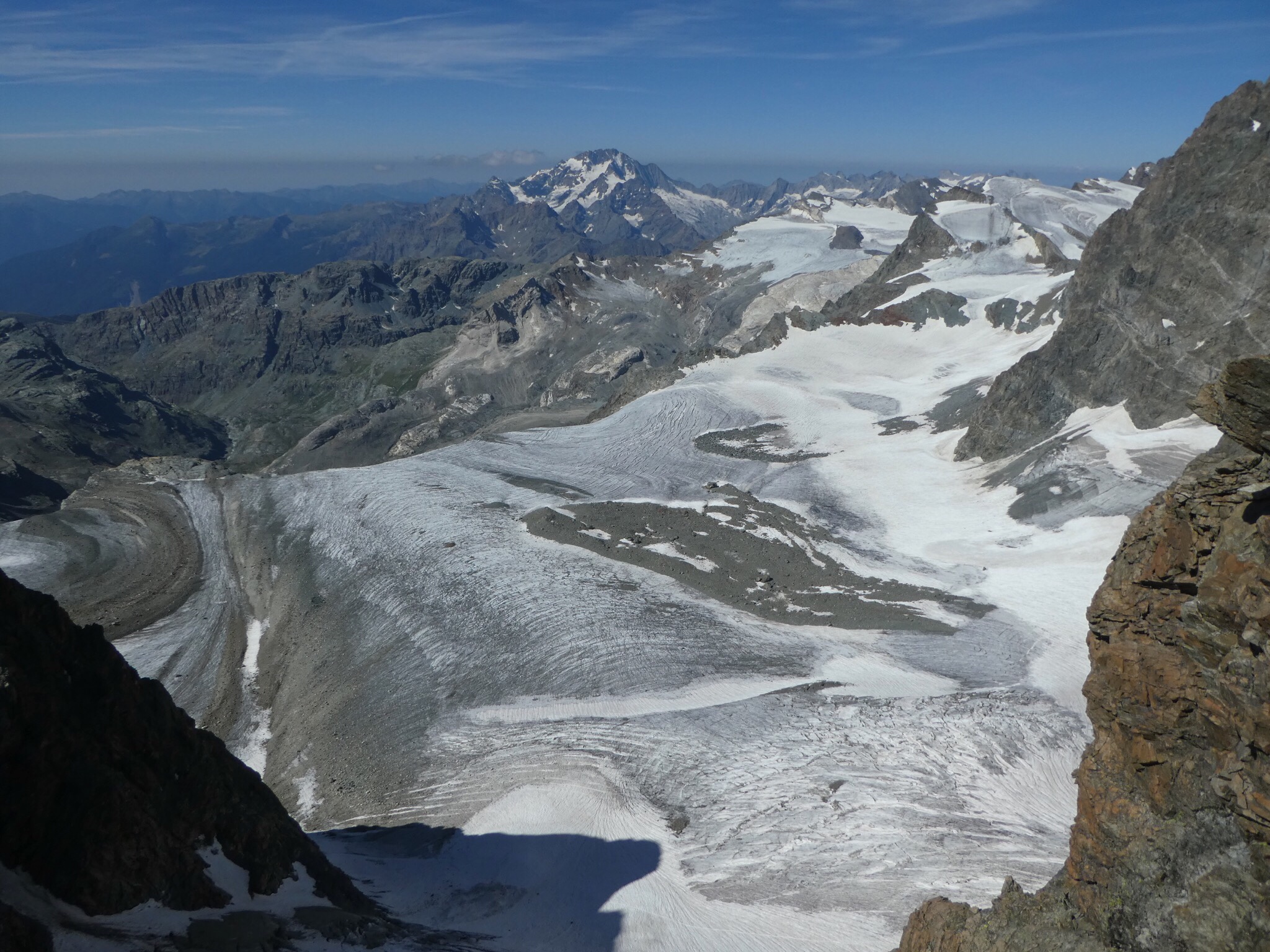 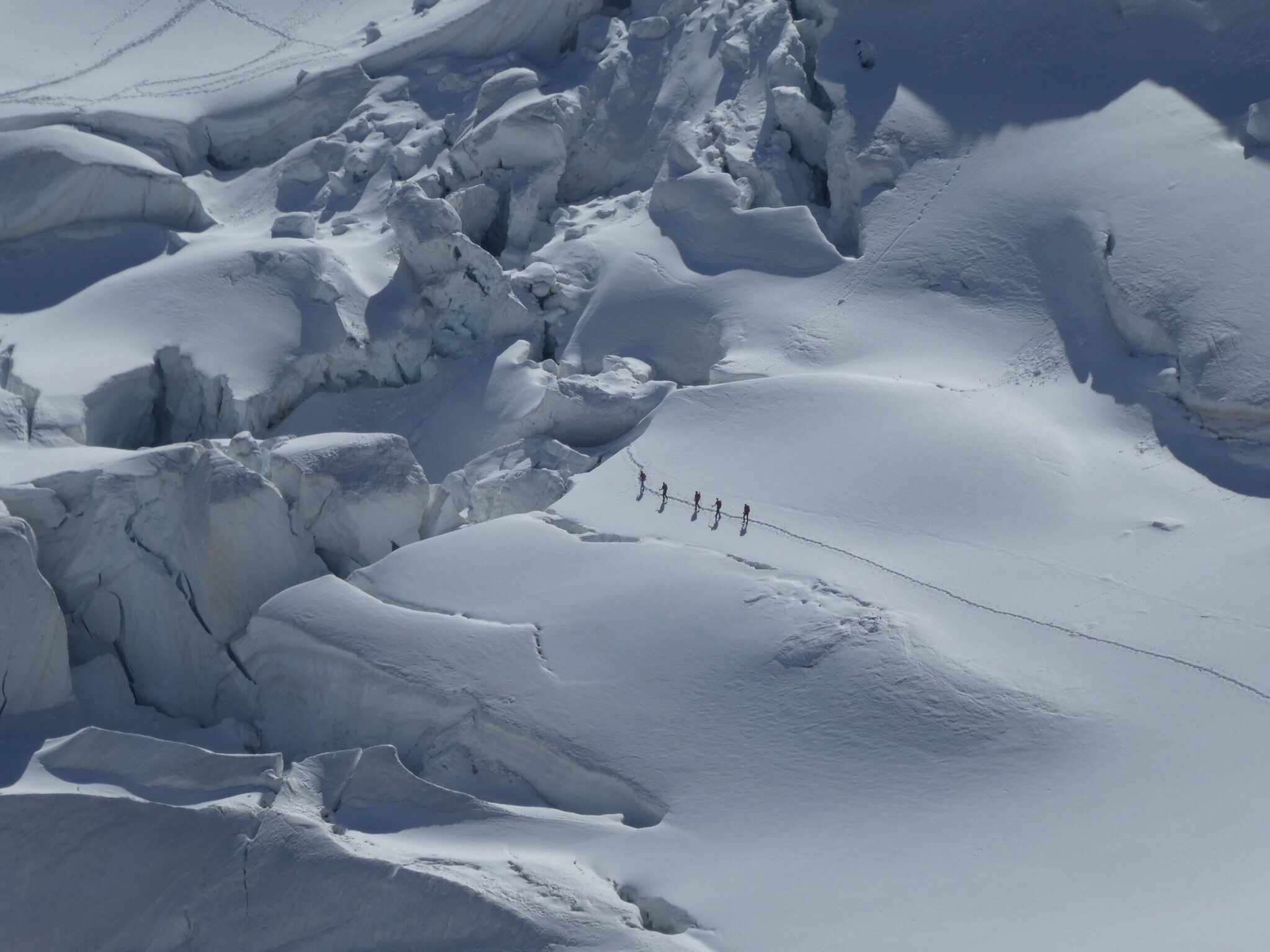 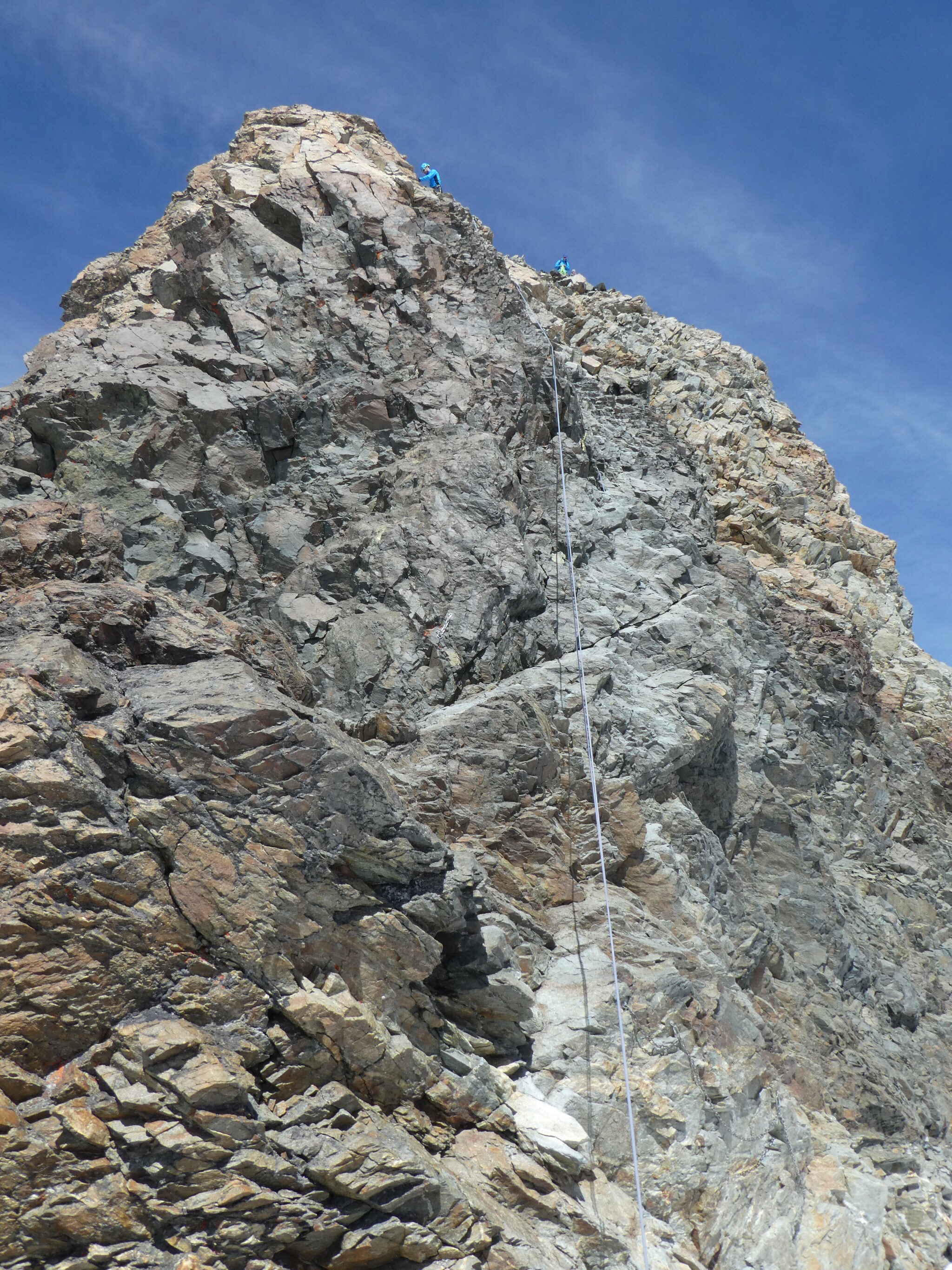 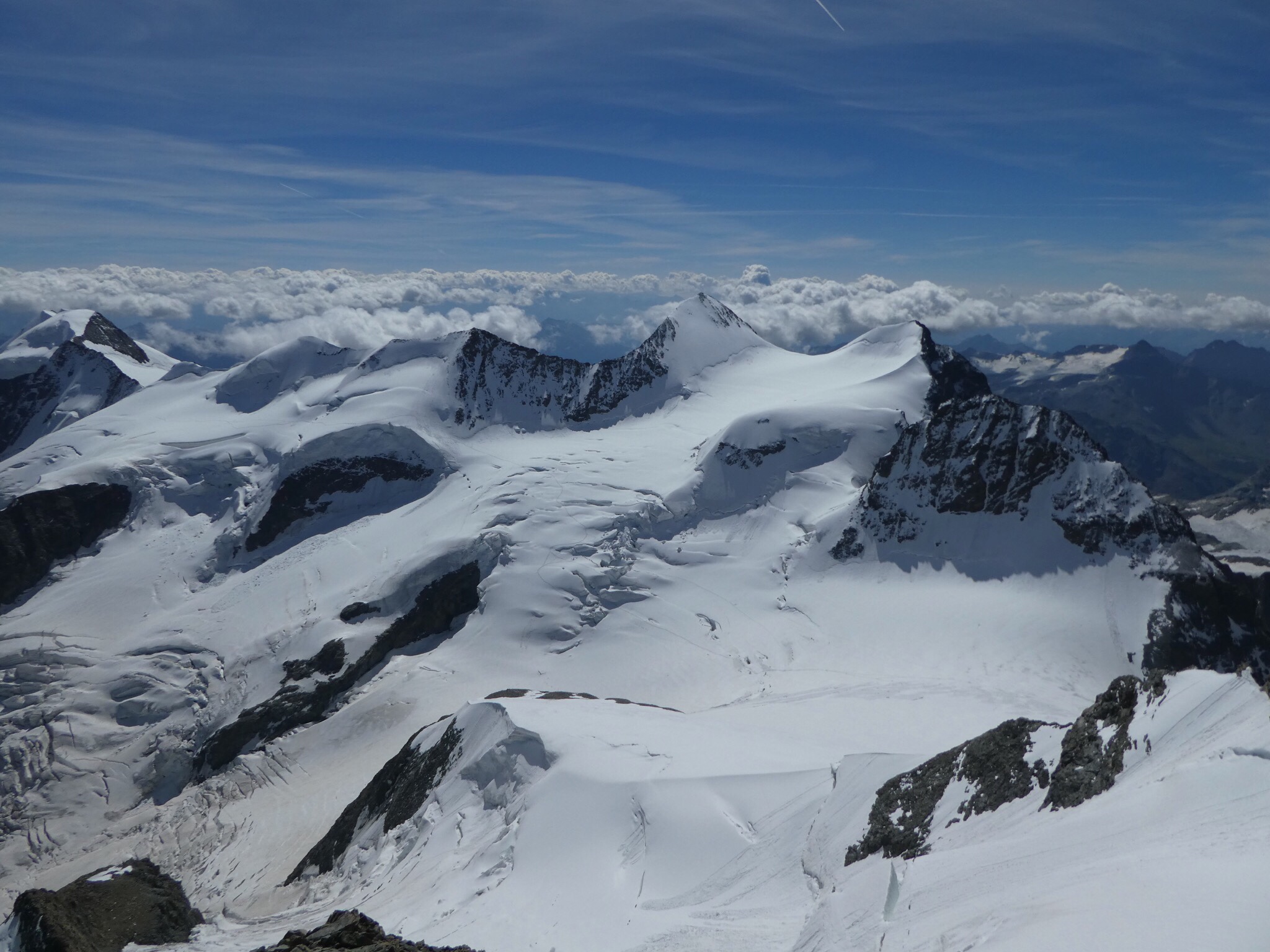 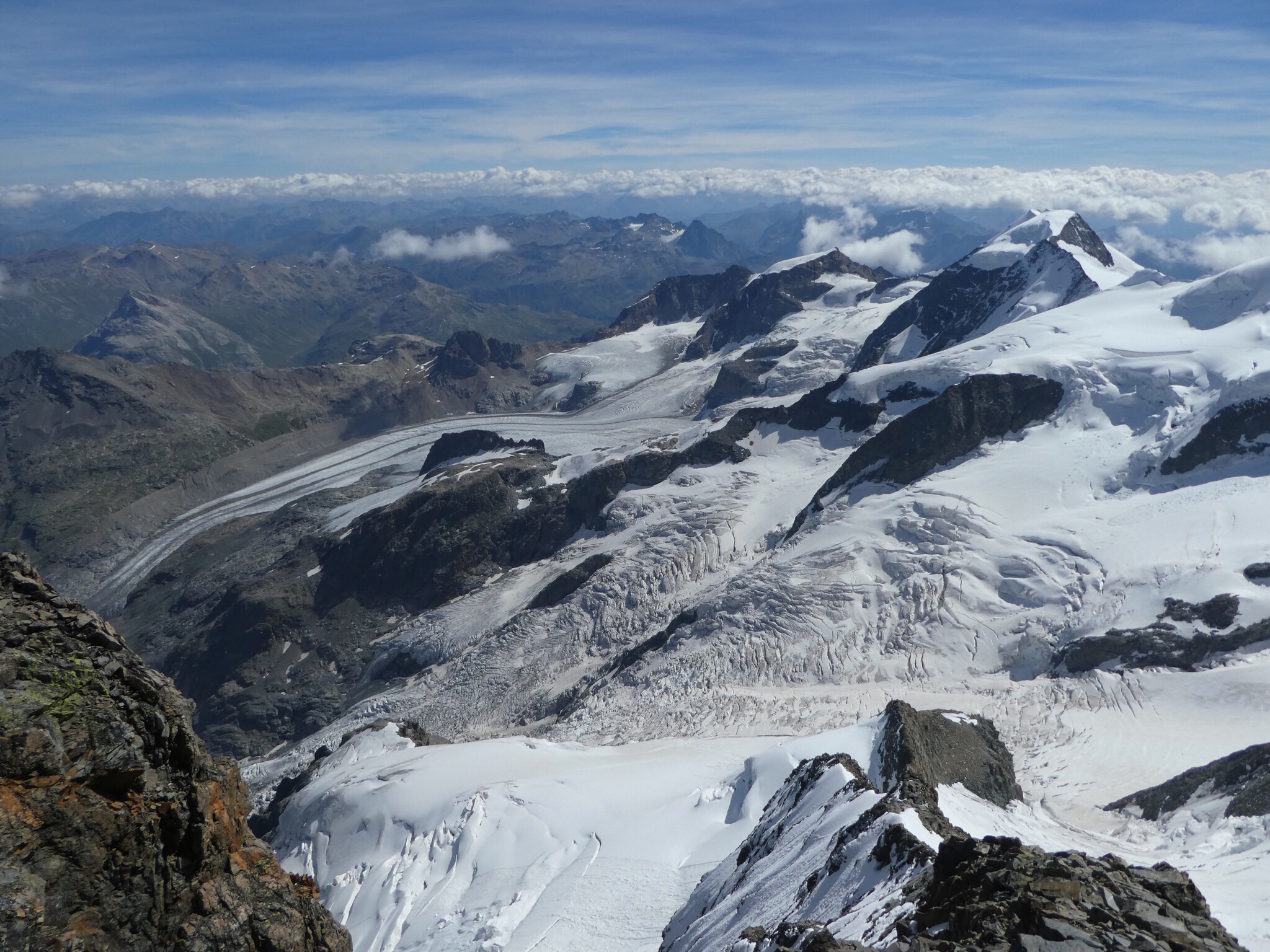 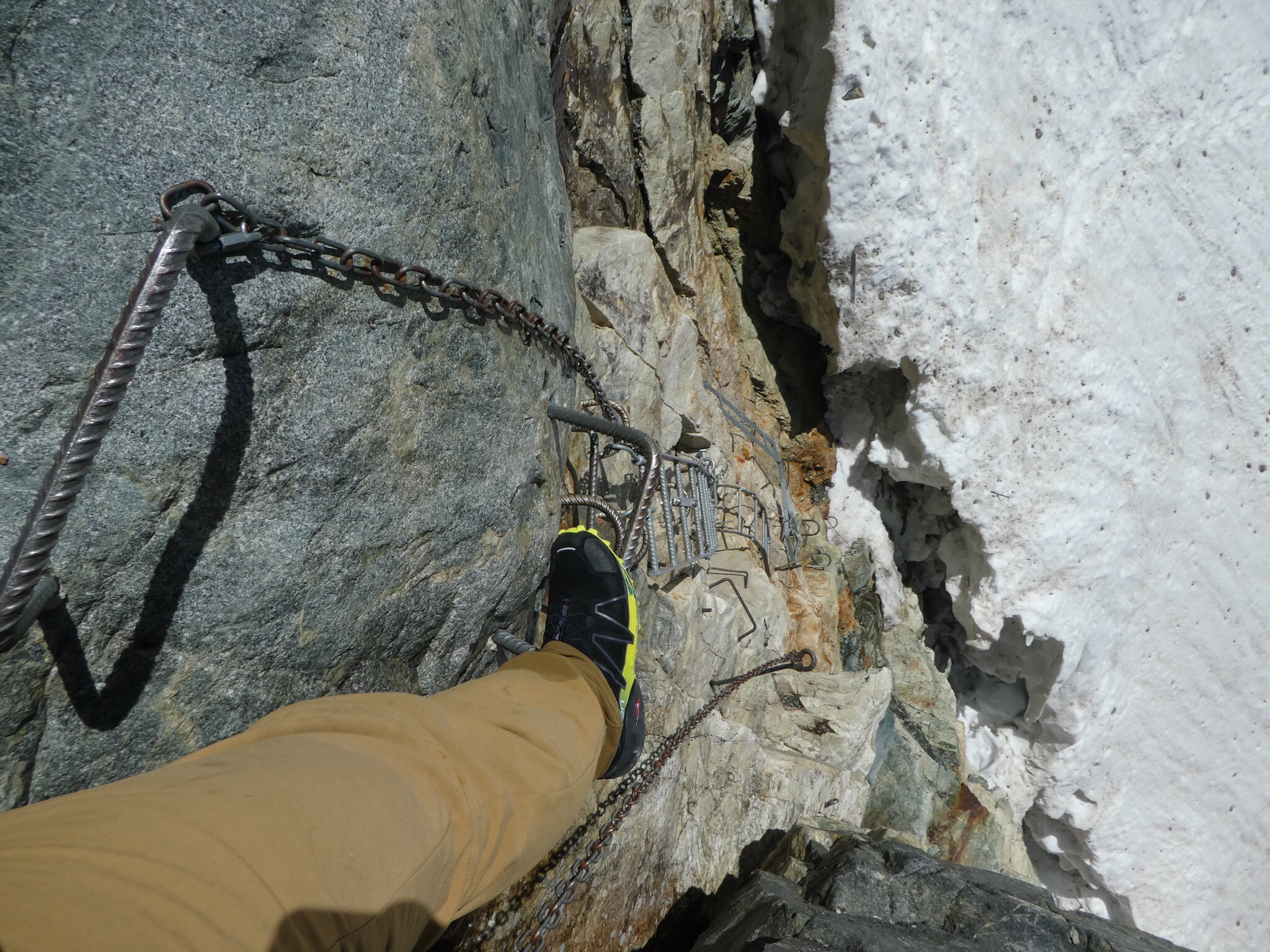 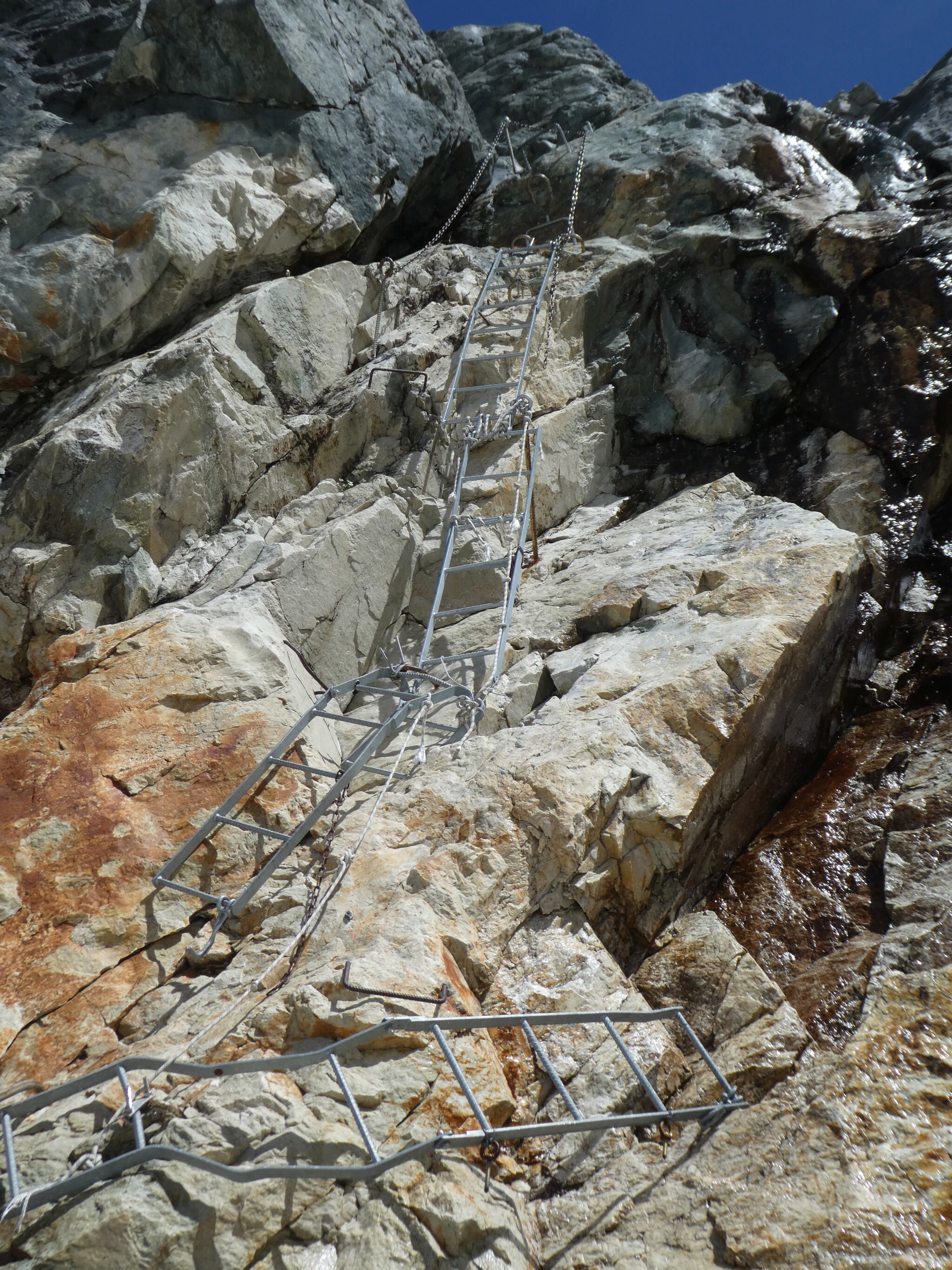 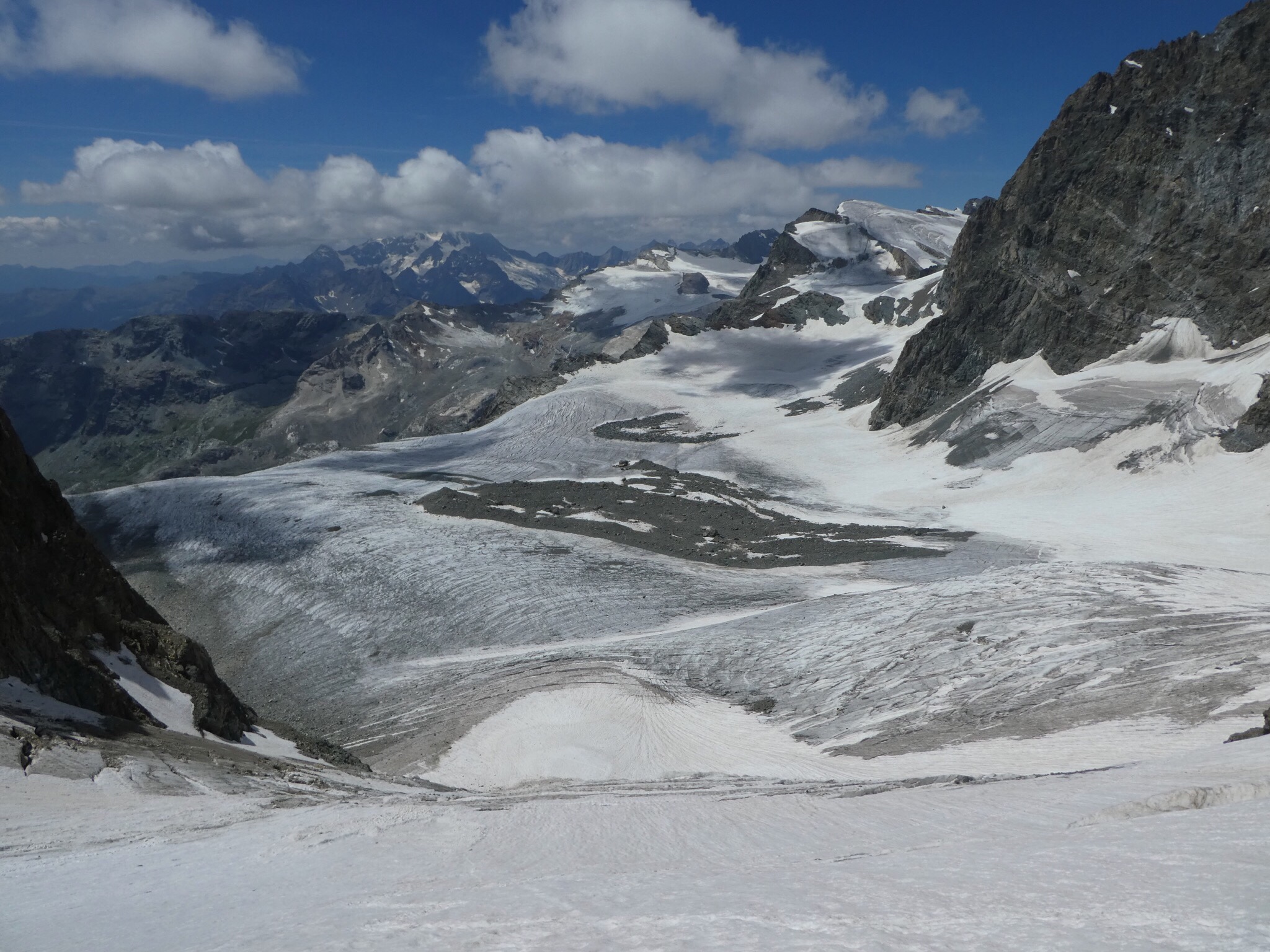 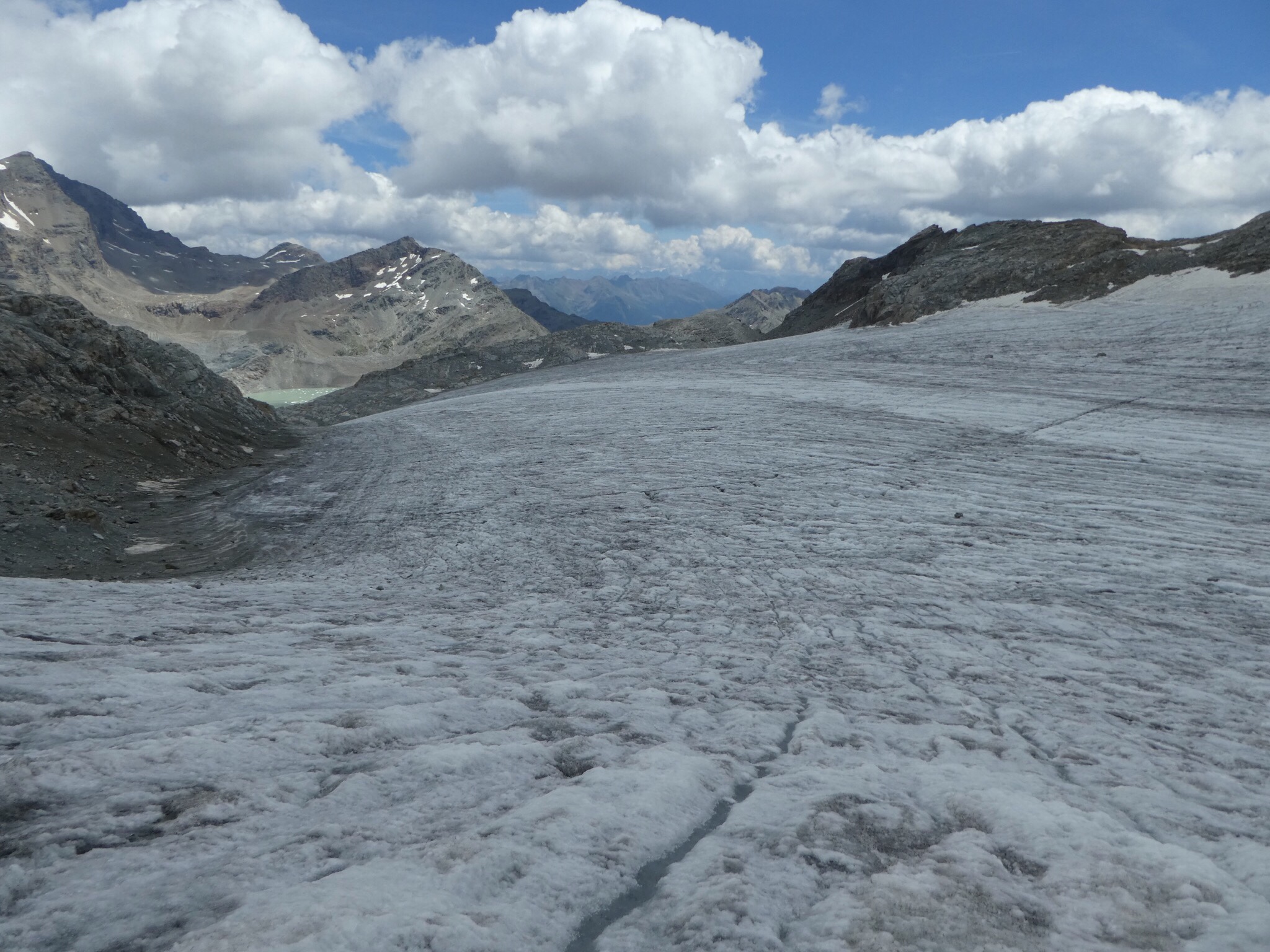 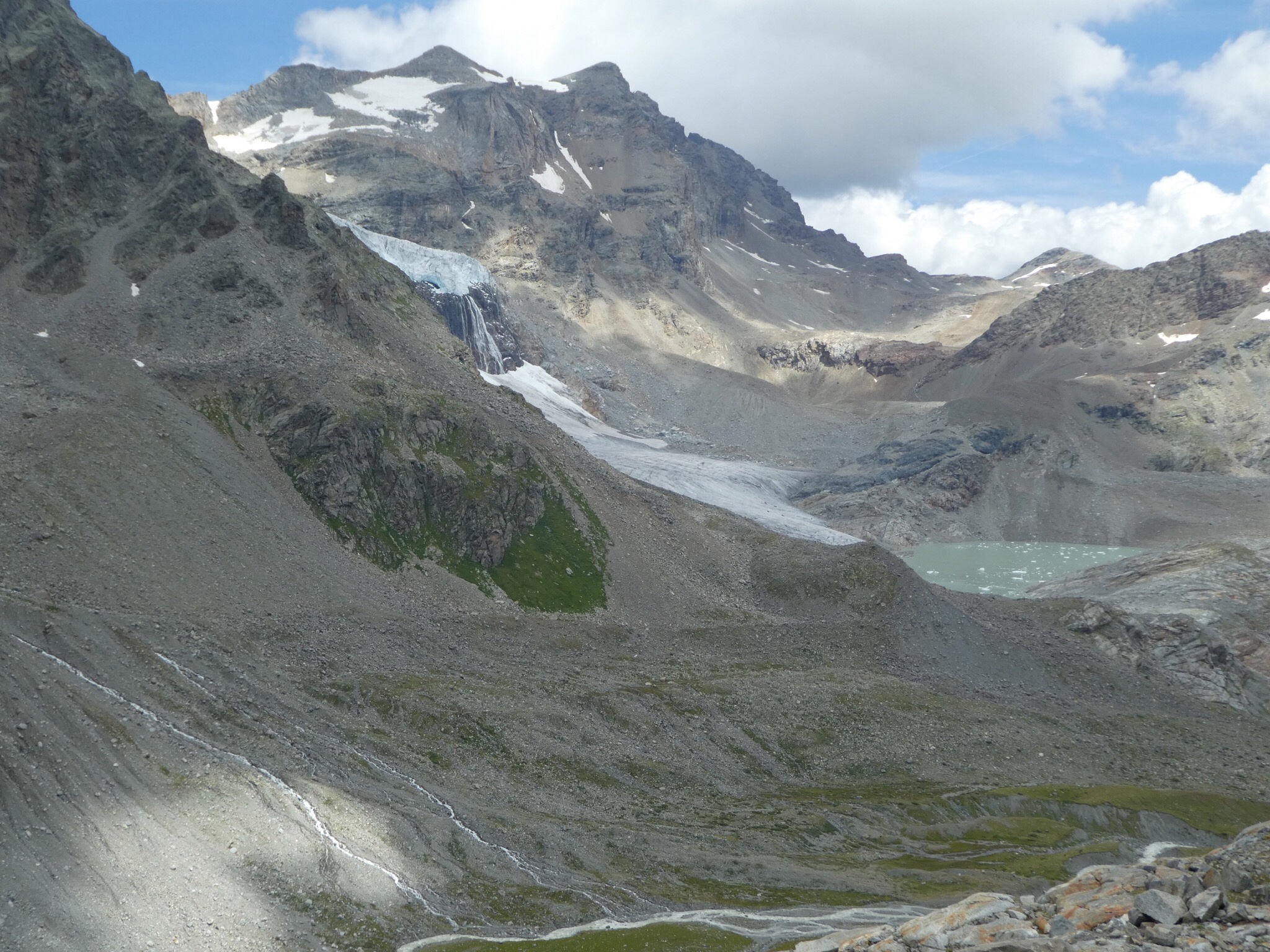 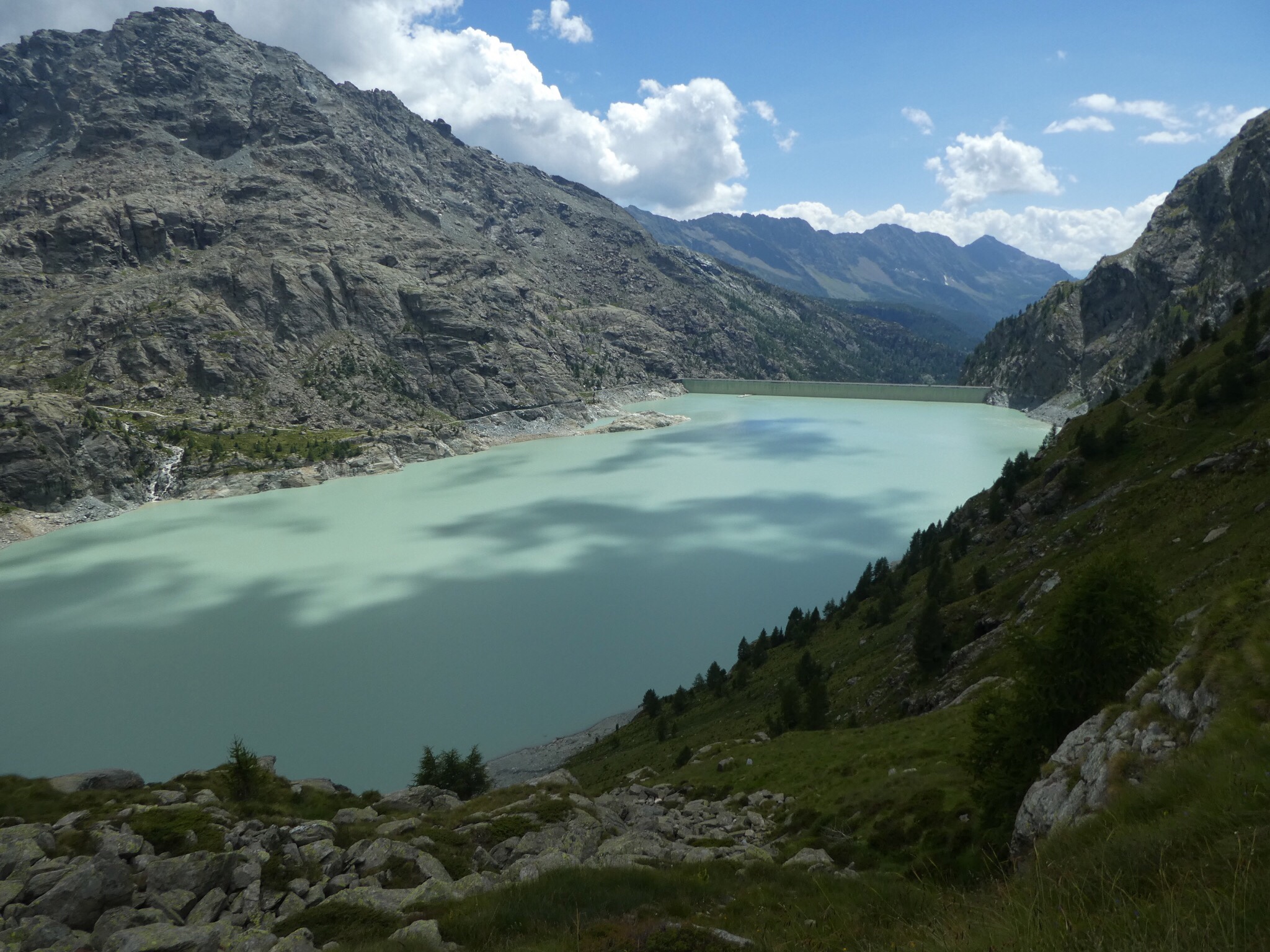