The Dent Blanche is a high 4000m peak near the Matterhorn and Dent d’Hérens, reached most easily from the Val d’Hérens in Switzerland. After a couple of days off in Chamonix, I drove the passes back over to Switzerland, then followed the Rhone Valley a short distance before winding back up to almost 2000m at Le Ferpècle, where I found a nice spot to camp at the semi-official parking lot. The transition from France to Switzerland was gentle, since this part speaks French and is not obscenely touristy. 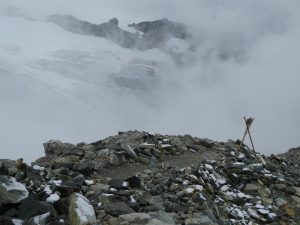 I got started a bit after 5:00, putting in a small amount of headlamp time on the long hike up to the high hut at 3500m. It had rained for the whole drive from France, and it was cloudy, so I had a wet, foot-soaking, and generally demoralizing hike. I could see bits of the large Ferpècle Glacier peeking out in the clear spots, but mostly just saw grass, then moraine, then some wretchedly soft snow just below the hut. The route was marked with some cairns, but also tripods holding rocks, which reminded me of something you would see (only with human heads) Colonel Kurtz’s camp in Apocalypse Now. The previous day’s rain had been snow from maybe 3400m up, so there was fresh snow in the boot-pack to the hut, and the promise of more on the route, which would no doubt complicate things. 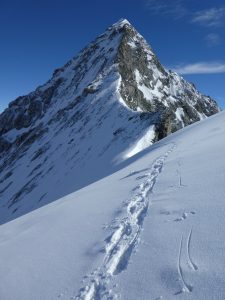 I passed the quiet hut without looking in, only to have the hut-keeper come out and ask a polite version of “what the hell are you doing?” She made me promise to check in on the way down, then let me get back to doing ill-advised things like soloing a clouded in peak in fresh snow. 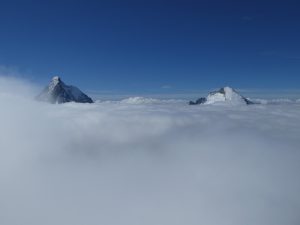 There was a guide/client group ahead of me, so I followed their tracks up the boot-pack to the snow saddle at the base of the south ridge. Here I gained the easy, boulder-y lower ridge, and made good time, glad to be on terrain that did not constantly re-soak my feet. The east side of the ridge was snow-free and mostly dry, while the west side still held a thin coating of last night’s slush. As I climbed above 3900m, I was pleased to finally emerge above the clouds. Cloud-cover extended at that level in all directions, simplifying the range by hiding all but the 4000m peaks. I could see the Matterhorn and Dent d’Hérens nearby, with the Zermatt peaks a bit farther away, and the Mont Blanc massif in the distance to the other side. 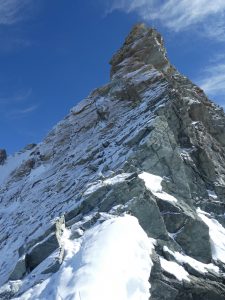 I continued to follow the boot-pack, not needing crampons for the lower snow traverses, then transitioned to rock as I made my way up toward the Grand Gendarme, one of several obstructions on the ridge. The route around traversed some slabby ground on the left side before climbing a steep snow-slope back to the ridge. I finally put on crampons here, both for the rock traverse and for the snow afterward. This became unpleasantly icy higher up, and I had to be super-cautious with my running shoe crampons. 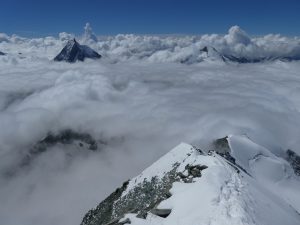 There are three lesser gendarmes between that one and the summit. The first two are passed on the right, so the dry rock presented no problems. The last is passed on the left, and while I managed to do it without crampons, that was probably a bad idea, sketching across some snowy ground and up a chimney with patches of ice. Above, more easy snow led to the summit. It was sunny and calm, so I spent plenty of time admiring what I could see of the surrounding peaks before retracing my steps. 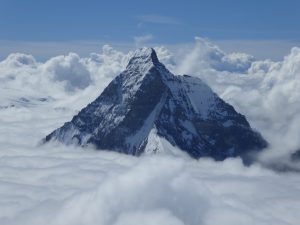 As usual, I used the crampons more on the way down, putting them on for the summit snow ridge, then leaving them on for the highest gendarme bypass. I had a bit of route-finding difficulty and, when I figured it out, wondered how I had gotten up in just running shoes. The snow downclimb above the Grand Gendarme was also a bit sketch, but the rest of the ridge went easily.

I checked in as promised with the hut guardian, then passed the guided pair descending just below the hut, and several more teams ascending for a summit the next day. The clouds were starting to break up, so I got a much better view of the large Ferpècle Glacier, and its neighbor the Mont Miné, which probably met in the valley below a century ago. There were many more cars parked along the road when I got back, with lots of day-hikers coming up to look at the glacier from near an abandoned hotel and some old stone buildings. I passed several on the way down, then drove around to the dreaded Matter valley.