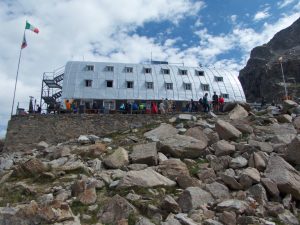 Gran Paradiso is the highest of a group of mountains south of Mont Blanc, in a national park in northwest Italy. Goedeke’s guidebook gives it a less-than-stellar review, calling it something like a “crowded glacier slog,” and it lived down to expectations, being my least-favorite European outing so far. Still, tagging this garbage-peak was a good way to make use of a day of mediocre weather, with a high trailhead and straightforward standard route. 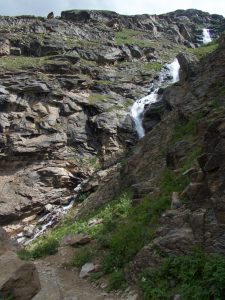 It had rained overnight, so I got a semi-lazy start from the big parking lot at Le Pont, located at nearly 2000 meters. The trail started out as a road, then became a cobbled stock trail, switchbacking efficiently up the side of the gorge toward a hut. I passed a few morning day-hikers on the way, but I was out too late for “alpinists” going up, and too early for any coming down. I was on the lookout for the ibex which supposedly inhabit the park, but saw only a single, skittish chamois. 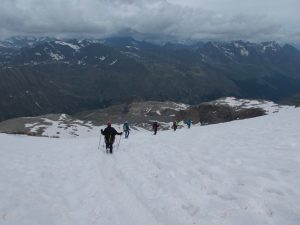 I passed the hut, then looked around a bit before finding a line of cairns crossing the boulder-field on its north side. After this minor boulder-hop, I followed a lattice of trails connecting an irregular grid of cairns up the slope toward the still-invisible Gran Paradiso. The steep sides of the valley, and bulges on this face, hide the summit until one is only about a kilometer and a few hundred vertical meters away.

Reaching the base of the snow, I followed a well-developed boot-pack up a gully toward the Gran Paradiso Glacier. It was still cool and shady, but the rain had softened the surface snow a bit, and I did not need crampons to follow the path. As it turned out, I did not use my crampons or ice axe the whole day, merely taking them for a walk. As the climb steepened below the glacier, I began running into groups of various sizes coming down, roped together and playing “mountaineering dress-up.” At least, that is the term that comes to my mind when watching people walking down a moderate, sun-cupped snow slope while tied together, carrying ice screws, and wielding trekking poles. 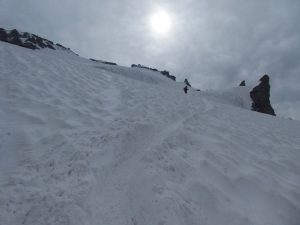 The weather deteriorated as I climbed, and the previous night’s rain turned to snow, filling in the sun-cups and chilling my feet. When I topped out on rise where I could finally see the summit, I met a chilling wind, and put on all my layers and almost my mitts. The summit was still a little ways off, but I could see from below the line of people waiting to stand on the small rock outcrop. I was not really putting in a full effort, stopping to let various groups pass on their way down, when I looked back to be startled by a man doing it right. He was charging up the trail with running shoes, ski poles, and… a spandex ski-mo suit! Seeing him charge past the “alpinists” lifted my spirits, and I hung with him for awhile before letting him gap me, as he was more aggressive in passing others. 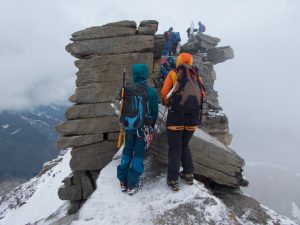 I reached the summit to find maybe a dozen people milling around, either ascending, descending, or waiting in line. The rocks were covered in a bit of ice and fresh snow from the night before, which probably made the situation worse than normal. Frustrated, I followed a path below the summit knob, then doubled back to carefully climb up the snowy rock to just below the final bottleneck. This proved to be a 10-foot, very exposed third class traverse, protected by two bolts. I waited, growing cold, for a group of three to make its death-defying way across, then stepped across and climbed around the last member to touch the Virgin Mary, who could also serve as a belay anchor. I took a couple of photos, then tried to get out of there. There was another group descending now, doing something weird with clove hitches on the draws they had clipped to the bolts. I finally gave up and climbed around below them on a narrower ledge, then retraced my route. 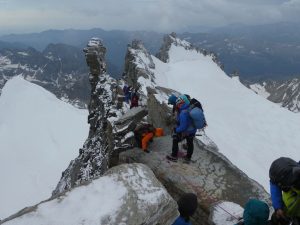 The snow got more fun as I descended, with good sliding in the path, or plunge-stepping on the rest of the slope. I was surprised for a second time by a guy who knew what he was doing, flying by me in a mixture of boot-glissades and running plunge-steps. I initially let him go, then mustered a bit of speed, catching him when he stopped to put something in his pack. In French, we briefly shared out enjoyment of the snow conditions, then took off again on our own paths, sliding and running down to the base of the snow.

Since I was in no hurry at all, I planned to walk or at most jog the path back to the car. There were fifty or more people outside the hut as I passed, but I did not feel like stopping to be surrounded by loud conversation in a language I don’t understand. The weather had improved a bit, it was getting warm as I descended, and I was taking my time when a fifty-something Frenchman in big boots, with two axes on his pack, tore past me on the switchbacks, taking every available shortcut. I followed him for a few, then returned to the trail. I am no fascist about trail-cutting, and often do so on trails with stupidly flat switchbacks, but this trail felt steep enough, and I prefer not to cut trails in front of tourists. I met the guy waiting at the base of the trail, and spoke to him briefly, pleased to be able to actually talk to someone. It turned out that he was only carrying his friend’s axe and doing the standard route that day, but he seemed to do a fair amount of legitimate climbing as well.

I hiked back to the trailhead, then drove toward Courmayeur, thinking I could get some errands done. Unfortunately this was Sunday, so almost nothing was open. I found a big supermarket where I could get some stuff, then drove up an awesome pass to 1950 meters to sleep more comfortably and lose less acclimation.

Valley back toward parking lot